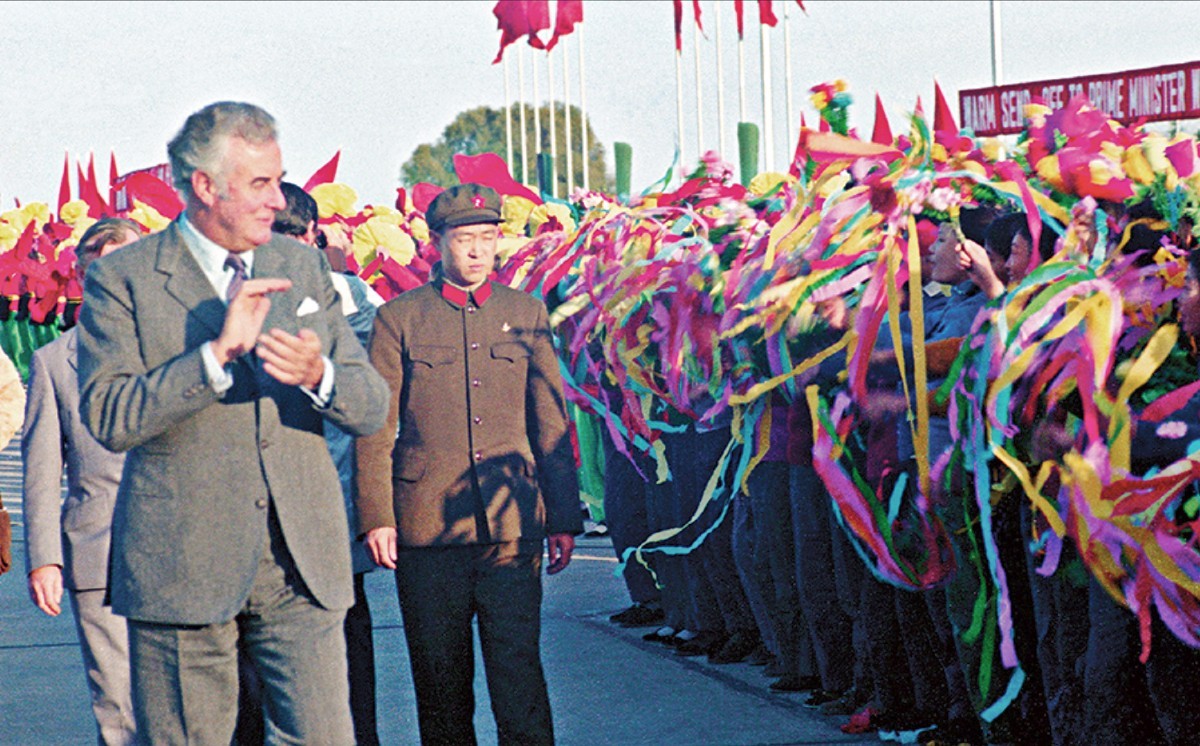 1974 and my Chinese takeaway

It’s hard to imagine that relations between Australia and China could be any frostier or more diplomatically brittle than they are today.

All the recent bad blood and equally bad news coverage and economic damage brought back memories of a happier time when our two countries first became friends.

As it happened, I was lucky enough to be in Peking (as it was called then) to see the 25th anniversary celebrations of the foundation of the People’s Republic of China.

And how different those celebrations were from the recent, blatantly militaristically focused celebrations that marked the 100th anniversary of the Chinese Communist party.

Gough Whitlam and his Labour Government were in power and just two years earlier, in a dramatic foreign-policy shift for Australia, we had diplomatically recognised the Communist-ruled People’s Republic of China.

The first tentative steps were taken in 1971 when Whitlam became the first Western leader to visit Peking and meet the Chinese leadership.

On this visit, he met Premier Zhou Enlai but it was not until 1973 that he finally got to sit down with Chairman Mao Zedong.

This was followed by the two opening embassies in each other’s country and this was followed in late 1974 by Australia’s decision to mount a major trade exhibition in Peking.

In reality, we were just about best mates.

Back then, two-way trade between Australia and China amounted to just $100 million, petty cash compared to the $250 billion or so that it is today – even with China’s economically bullying tactics of the past 18 months.

About 100 Australian companies, including our nation’s biggest — BHP — decided to participate.

At the time I was head of corporate publicity for the company that became known as “The Big Australian” (my invention)  and had the responsibility of preparing and mounting the company’s significantly-sized exhibition stand.

About 30 Australians, including members of then Department of Overseas Trade, its display contracting company and some private companies formed the advance party — to set things up about a month before the exhibition opened.

I was one of this early group.

The day of the the 25th anniversary celebrations fell just a couple of weeks before the Australian exhibition was due to open and because of this – and because of the vast amount of work we exhibitors still had to do – none of us really wanted to attend the festivities.

We were however told politely, but in no uncertain terms, that it was a national holiday and no-one  — Australians included – was allowed to work.

Our Chinese liaison officials said they would like us to “join the people in the parks to celebrate ‘liberation’, or the founding by Chairman Mao and his Communist Party of the People’s Republic of China.”

Somewhat begrudgingly we boarded our bus and the driver (we called him the Kamikaze Kid because of his driving habits) and headed for Sun Yi Shian Park, which is next to the Forbidden City — just off the huge and now infamous Tien An Men Square.

The square had become a giant parking lot for buses, trucks and big black “Red Flag” Chinese-made official cars — all dots among a sea of bicycles.

There were virtually no other cars and only a handful of military-type vehicles. How different Beijing is today.

As we walked through the entrance gates we were stunned by the incredible colour of the decorations and the hundreds of children performing national dances.

We had been in Peking for just over a week and had become used to the drab and colourless feeling of the city and its people, and what we saw in the park could not have been more dramatically different.

The other overwhelming impression we had was of people . . . more people than any of us had ever seen in the one place at a time.

I asked one of our interpreter/guides: “Do you know how many people are here today?”

In a rather matter-or-fact way, he answered: “Two million.”

We quite believed him.

We soon became aware that so few Westerners had visited Peking at that stage, we Aussies were very much a curiosity, and we were very much on display.

Most of us were substantially taller than the average Chinese and we were more colourfully and differently dressed than the Chairman Mao suits that most of the men and women wore.

Fancy cameras with long lenses and other trappings of Western affluence also set us apart.

As we strolled among the people we became aware of how orderly, well behaved and even gentle the masses were.

As we walked, the crowd just seemed to melt away and young girls, called “Red Guards”, who appeared to be in their early to mid teens with red arm bands, linked hands to form human crowd barriers along many of the paths.

There was no pushing or shoving and the girls, with their hands lightly clasped, were as effective as a stone wall.

I could not help thinking how differently an Australian crowd would have behaved.

While there was no flaunting of military might as was seen in the recent Beijing celebrations, there was a hint of militarism in some of the displays.

We saw model planes that looked remarkably like American B-52s being shot down by the guns and even tanks of the People’s Liberation Army.

There were also displays of steel making, with tiny blast furnaces that showered sparks as they produced more steel for Chairman Mao and the country.

Also very much to the fore were pictorial displays showing happy workers, soldiers and peasants working to further Mao’s revolutionary line as well as large and small groups criticising Lin Pio and Confucius for their revisionist ideas.

At noon we were herded back to our bus for lunch at our hotel before being taken to see the magnificent Summer Palace with all its wonders.

After some four hours playing wide-eyed tourists, we were driven to the People’s Sports Stadium – a huge MCG-like structure – for the massive night-time celebration program.

From our official seats, we were treated to a soccer match that was punctuated by three fireworks displays – the likes of which none of us had ever seen.

It capped off a remarkable day that left us overwhelmed and overawed by what we had seen.

For the 30 or so of us Aussies who had so reluctantly joined in the 25th anniversary of the foundation of the People’s Republic of China — it was a day that we’ll remember for a lifetime.