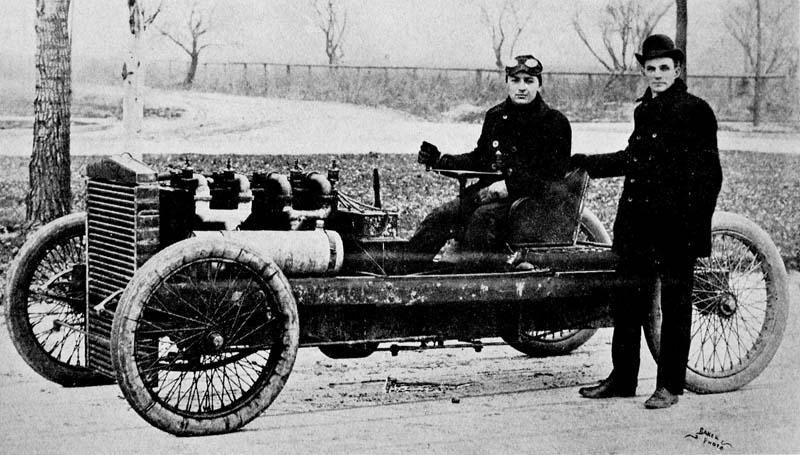 We’re talking the Henry Ford, the one who founded the Ford Motor Company and went on to revolutionise automobile production.

Driving a four-wheel device called the 999, which had a wooden chassis, but no body or covering for the engine, the 40-year-old entrepreneur clocked a blistering 91.37mph (147.05km/h) on a track carved out of the frozen Lake St. Clair in Michigan.

This particular car had been wrecked in a crash the year before in which the driver was killed.

But Ford rebuilt the thing and, with the aid of his mechanic Ed “Spider” Huff at the throttle, he went on to set the record on January 12, 1904.

The cars were heavily engineered, with an 18.9-litre four cylinder engine, 100kg flywheel, and bore and stroke of 184x180mm.

Power was quoted at anywhere from 50 to 75kW.

There was no rear suspension, no diff, and steering was controlled by a crude handlebar arrangement.

Ford’s record stood for little more than a month, but it was still a record and, more importantly — money in the bank for someone trying to get their own car company going.

Four years later Ford launched the Model T, a car that revolutionised not only the automotive industry, but provided the masses with affordable, reliable transportation for the first time.

To promote the Model T, he entered it in races and in 1909, the Model T won a race from New York to Seattle — although it was later disqualified on a technicality.

The Model T continued to win races, but Ford was reportedly unhappy with certain rules and quit racing in 1913.

Dustin Hoffman does plug for VeeDub

Born July 30, 1863 on a farm in Dearborn, Michigan, he began his career as an engineer in Detroit where he built a four-wheel, self-propelled vehicle with a gasoline engine in 1896 that he called the Quadricycle.

The rest as they say is history.