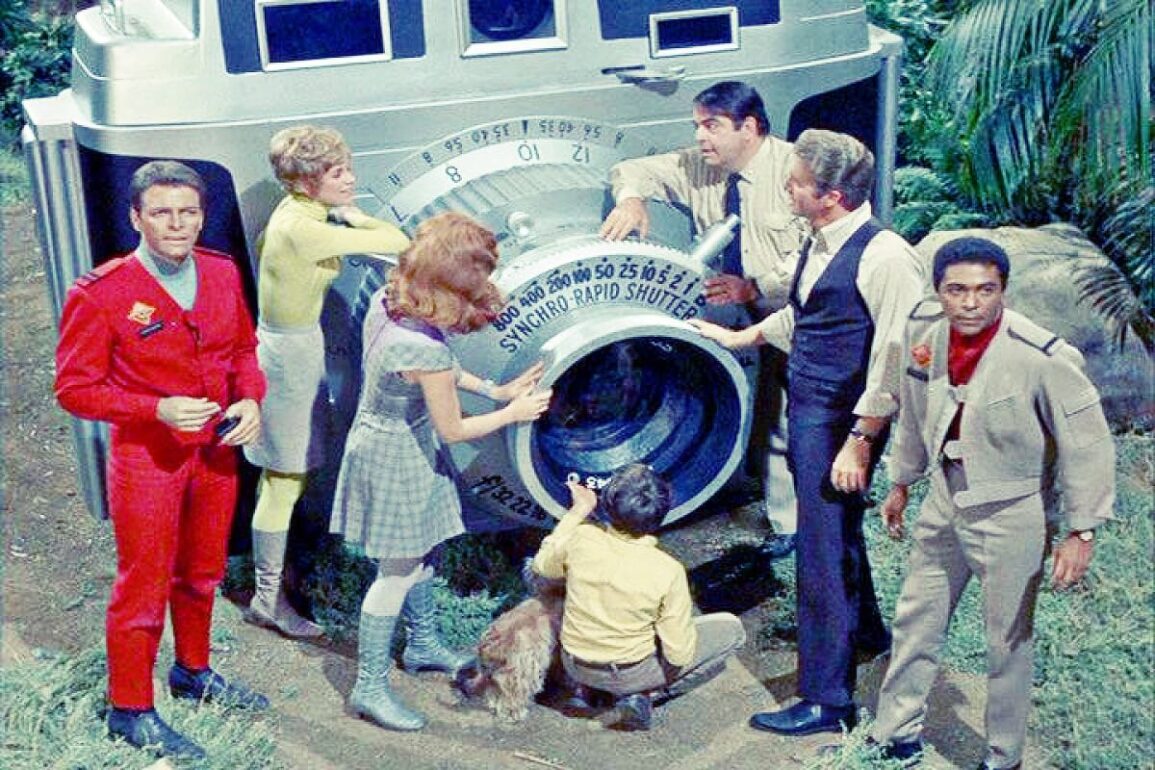 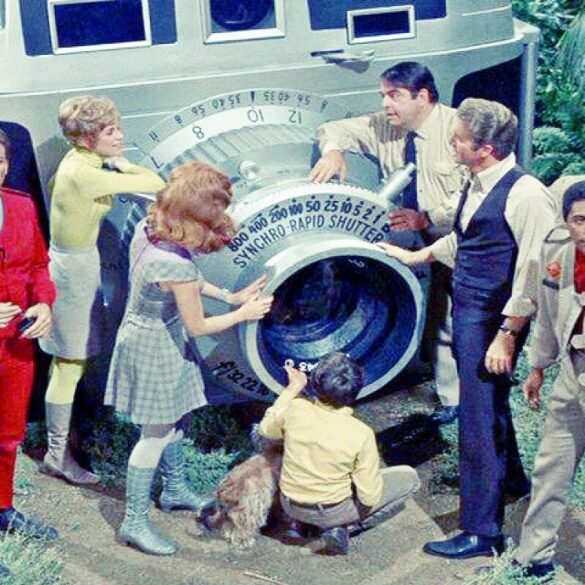 Home
Time out
Watch it
Irwin Allen the ‘Master of Disaster’

Growing up in the 1960s and ’70s meant watching a lot of movies and television.

TV particularly became the default babysitter as we raced home from school to watch our favorite cartoons and shows.

Much of that entertainment would have been provided by the ‘Master of Disaster’ Irwin Allen, who was responsible for many of the blockbuster film and television series of the Seventies — films such as the Poseidon Adventure and The Towering Inferno.

He was also the nae behind series such as Lost In Space, Voyage to the Bottom of the Sea and the Land of the Giants.

I watched them all. Some may seem silly these days, but some like the Land of the Giants or the Voyage to the Bottom of the Sea television series are still pretty good.

Back then, they were great.

Allen who died in 1991, was an American film and television producer and director, known for his work in science fiction and became known as the “Master of Disaster” for his work in the disaster film genre.

His most successful productions were The Poseidon Adventure (1972) and The Towering Inferno (1974).

Allen became involved in film production at a time when power was beginning to shift from studios to talent agencies.

He put together packages consisting of directors, actors, and a script, then sold them to film studios.

Allen’s first film as producer was Where Danger Lives (1950) at RKO with Robert Mitchum.

It was directed by John Farrow and written by Charles Bennett.

Allen made his directorial debut with the documentary, The Sea Around Us (1953).

This was based on Rachel Carson‘s best-selling book of the same name.

It was made with largely stock footage and won the 1952 Academy Award for Best Documentary Feature.

Allen directed a semi-documentary about the evolution of life, The Animal World (1956).

Again, he made heavy use of stock footage, but he also included a nine-minute stop-motion dinosaur sequence by Ray Harryhausen.

Before release, he toned down the gore from both the live action and the animation.

Allen’s next film, The Story of Mankind (1957) was a very loose adaptation of the Hendrik Willem van Loon book of the same name.

It featured many well-known actors including the Marx Brothers.

Allen then went to 20th Century Fox, where he co-wrote (with Bennett), produced, and directed three films: The Lost World (1960), from the novel by Arthur Conan Doyle, then Voyage to the Bottom of the Sea (1961), and later Five Weeks in a Balloon (1962).

The spinoff television series Voyage to the Bottom of the Sea (1964–68) established both Allen and 20th Century Fox’s reputations as television producers.

The financial viability of the series was helped by the reuse of many sets from the film; the cost of the Seaview submarine sets alone exceeded the budget of a typical pilot show of the era.

The series also benefited from Allen’s by-now notorious use of stock film footage, particularly from Hell and High Water (1954), The Enemy Below (1957), and Allen’s The Lost World.

Lost in Space‘s Bill Mumy (Will Robinson) said of Allen that, while he was very good at writing television pilots that sold, his unwillingness to spend money hurt his shows’ quality once on the air.

A monster costume that appeared on one of his shows, for example, would appear on another a few weeks later with new paint.

“Here was a man who, when told the cost of a spaceship for a Lost in Space alien, snapped, ‘Let him walk!’ . . . and then let the show be cancelled rather than take a cut in the budget.”

In the 1970s, Allen produced the most successful films of his career: The Poseidon Adventure (1972) and The Towering Inferno (1974), directing the action scenes for both.

Irwin pioneered a technique “rock-and-roll” which saw the camera rocked as cast rushes from side to side on the set, simulating a ship being tossed around.

It was employed in many episodes of Lost in Space and Voyage to the Bottom of the Sea.

Interestingly, he purchased the rights to several Marvel characters including Daredevil, Black Widow and others for television adaptation in the 1980s.

He even commissioned a script for a Daredevil pilot from writer Stirling Silliphant, but the project never went any futher.

Declining health forced his retirement in 1986.

The Lost World was a 1960 De Luxe Color and CinemaScope fantasy adventure film directed by Irwin Allen and loosely based on the 1912 novel of the same name by Arthur Conan Doyle.

The plot of the film revolves around the exploration of a plateau in Venezuela inhabited by cannibals, dinosaurs, carnivorous plants and giant spiders. 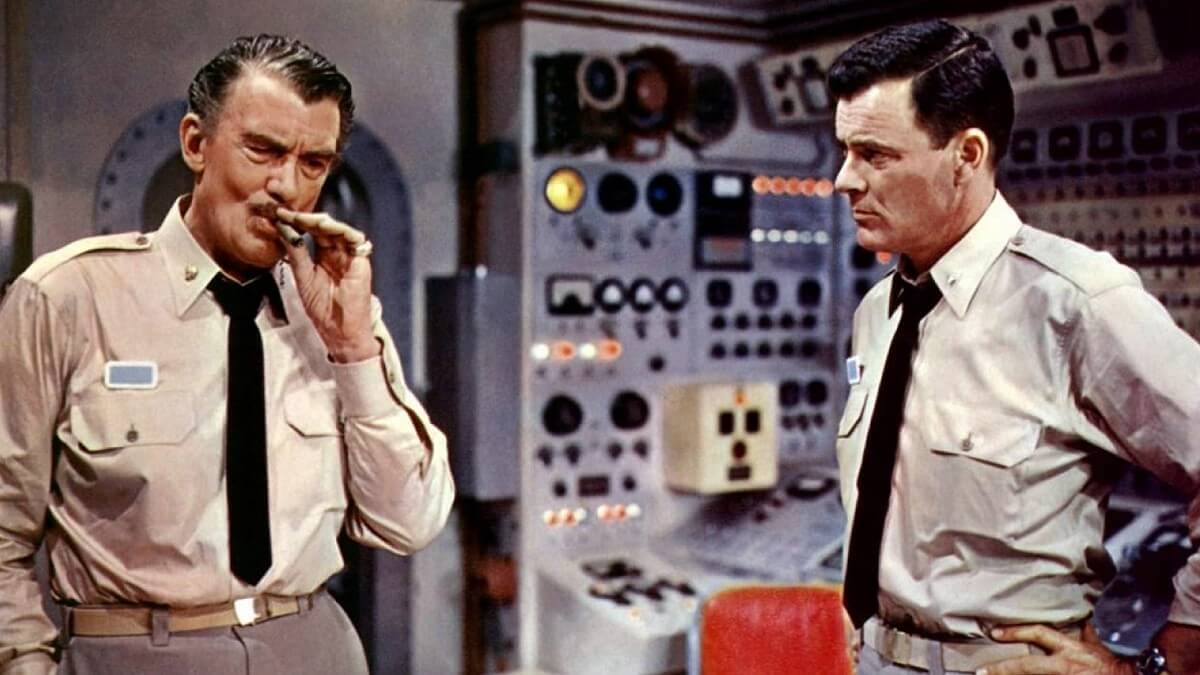 The original Voyage to the Bottom of the Sea film hasn’t aged well.

A dogmatic Admiral Nelson (Walter Pidgeon) runs roughshod over the rest of the scientific community after the Van Allen radiation belt which surrounds the Earth catches fire and the world is threatened.

Discarding other theories, the Admiral believes he has the answer and that involves firing an Atomic missile into the atmosphere at an exact time and place.

With time running out, he embarks in his submarine the Seaview to put his plan into action.

After all, he works for the Government.

Which Government? The American Government of course.

The film’s storyline was written by Irwin Allen and Charles Bennett, while the opening title credits theme song was sung by Avalon. 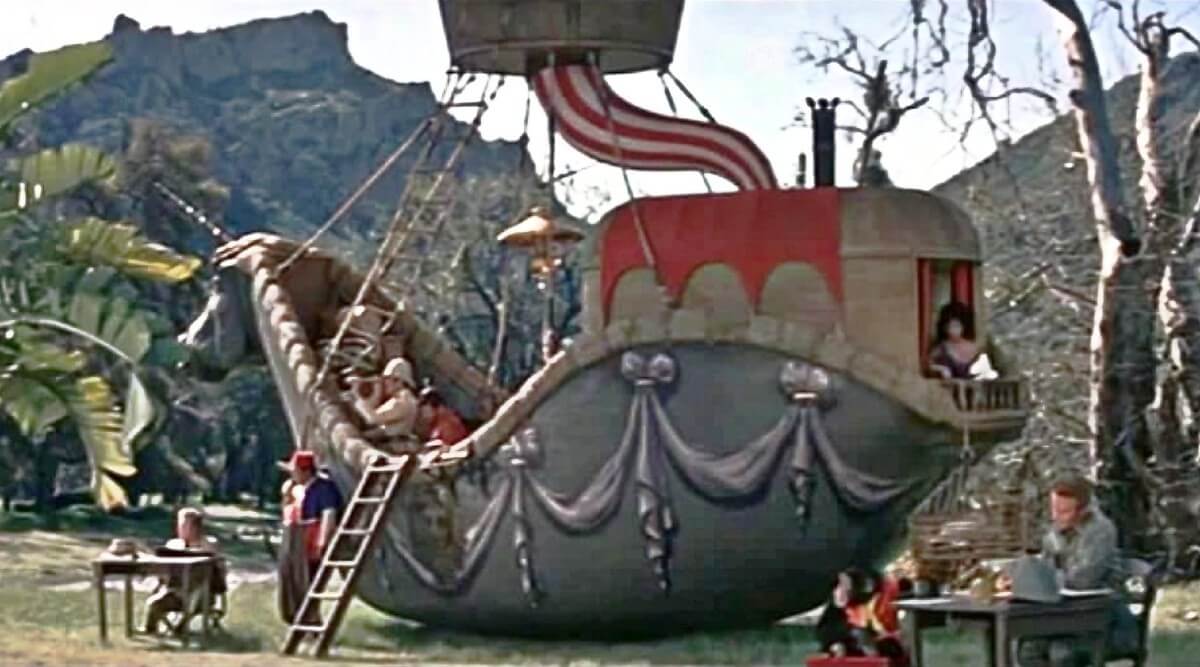 Five Weeks in a Balloon is loosely based on the 1863 Jules Verne novel of the same name.

It was produced and directed by Irwin Allen, and was his last feature film in the 1960s before moving to producing several science fiction television series.

Although set in Africa, it was actually filmed in California.

For visual effects, a model of the balloon was used as well as a full-sized unicorn gondola which was hung from a crane. 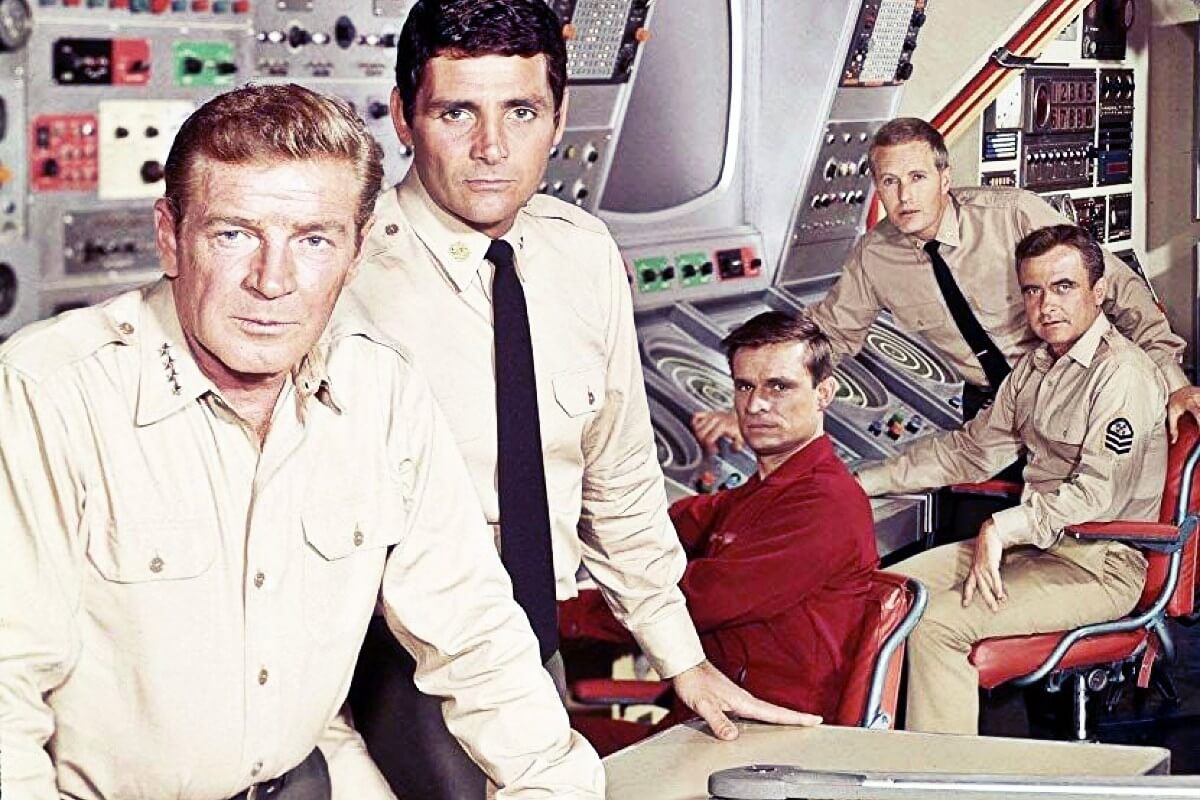 Still very watchable, even after all this time, the TV series had a four-year run from 1964 to 1968.

Voyage to the Bottom of the Sea was the first of Irwin Allen’s four science fiction television series, along with Lost in Space, The Time Tunnel and Land of the Giants.

It was also the longest-running.

The series also benefited from Allen’s by-now notorious use of stock film footage, particularly from Hell and High Water (1954), The Enemy Below (1957), and Allen’s The Lost World. 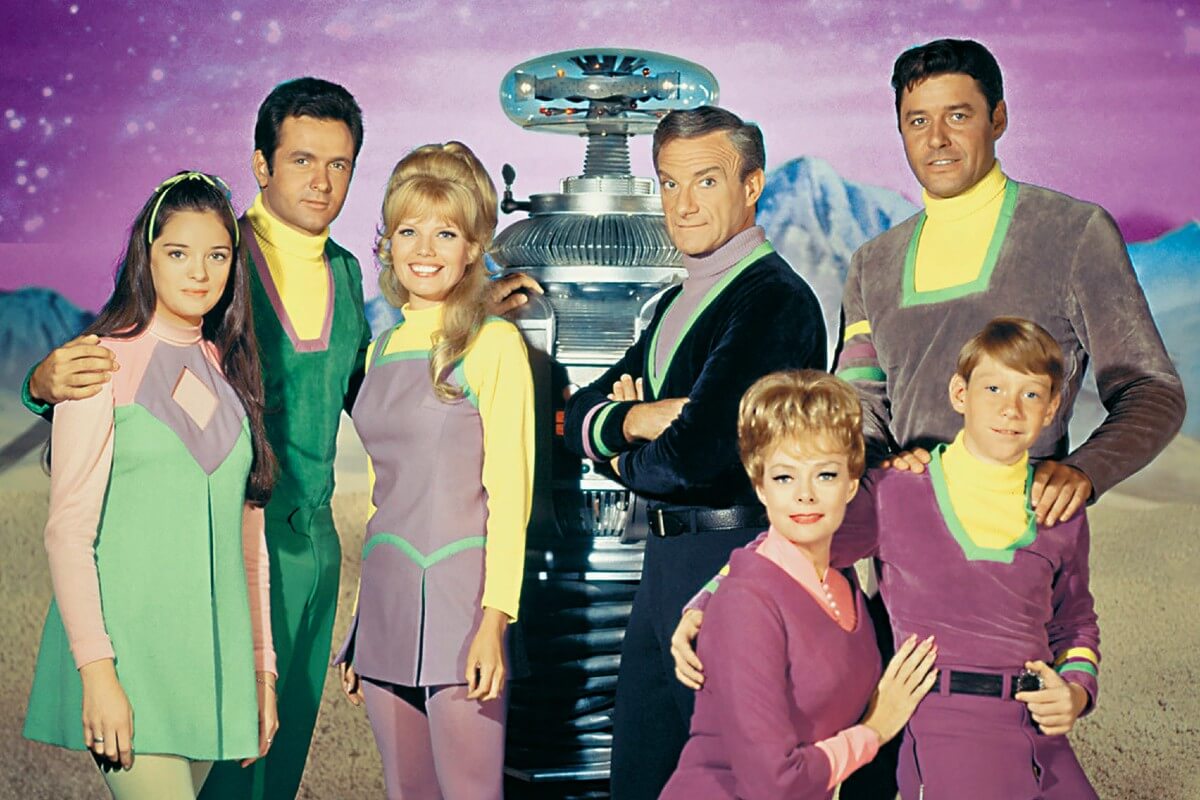 Everybody remembers Lost in Space and Dr Smith.

The show was originally aired between 1965 and 1968 on CBS, but has been repeated many times.

It was inspired by the 1812 novel The Swiss Family Robinson and follows the adventures of a pioneering family of space colonists in the Jupiter 2 and their struggle to survive.

Dr Zachary Smith tries to sabotage the flight and reprograms the Jupiter 2‘s B-9 environmental control robot to destroy critical systems eight hours into the flight.

But he becomes trapped aboard  and his extra weight throws the Jupiter 2 off course, causing it to encounter asteroids.

This, combined with the robot’s rampage, sees the ship become hopelessly lost in space. 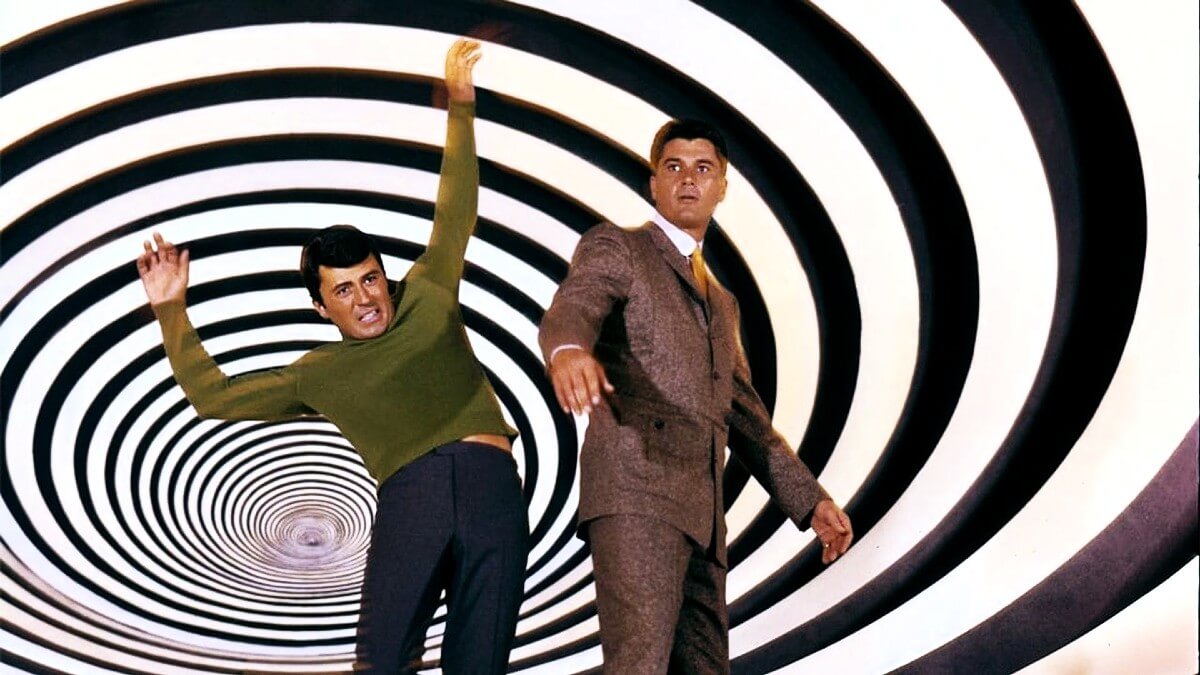 The Time Tunnel could be viewed as a precursor to the Stargate movie and TV series.

It starred James Darren and Robert Colbert  (Dr Tony Newman and Dr Doug Phillips) and was about Tic-Toc, a top-secret US Government project to build an experimental time machine.

The project comes under fire when a US Senator threatens to withdraw its funding if they don’t get to the point and actually send someone back in time.

Tony volunteers, but he is turned down by project director Doug Phillips.

Defying this decision, Tony sends himself into time. Doug follows shortly after to rescue him  — and they both become lost in time. 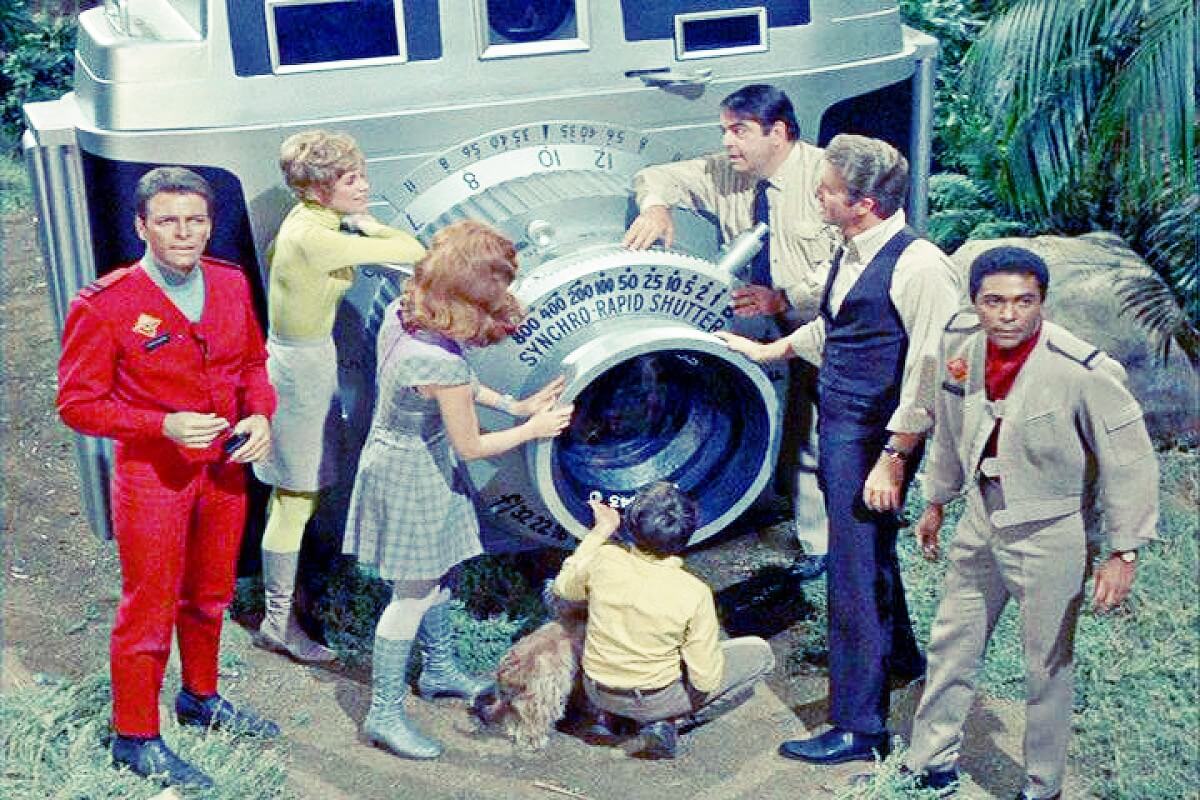 Land of the Giants was the fourth of Allen’s science-fiction TV series.

Set in 1983 (15 years in the future at the time), it tells the tale of the crew and passengers of a suborbital transport ship named Spindrift.

En route from Los Angeles to London, on an ultra-fast suborbital flight just beyond Earth’s orbit, the Spindrift encounters a magnetic storm and is dragged through a space warp.

The ships crash lands on a mysterious planet that is like Earth but where everything and everyone is 12 times larger.

The authoritarian Giant Government offers a reward for the capture of the small Earth people, who it calls “the little people”.

The Poseidon Adventure was based on Paul Gallico’s 1969 novel of the same name.

It tells the story of the SS Poseidon, an aging luxury liner on her final voyage from New York City to Athens where it will be scrapped.

But before it can get there the ship is hit by a gigantic tidal wave and capsizes, forcing the survivors led by a preacher to fight their way up from the top to the bottom of the ship and hopefully rescue. 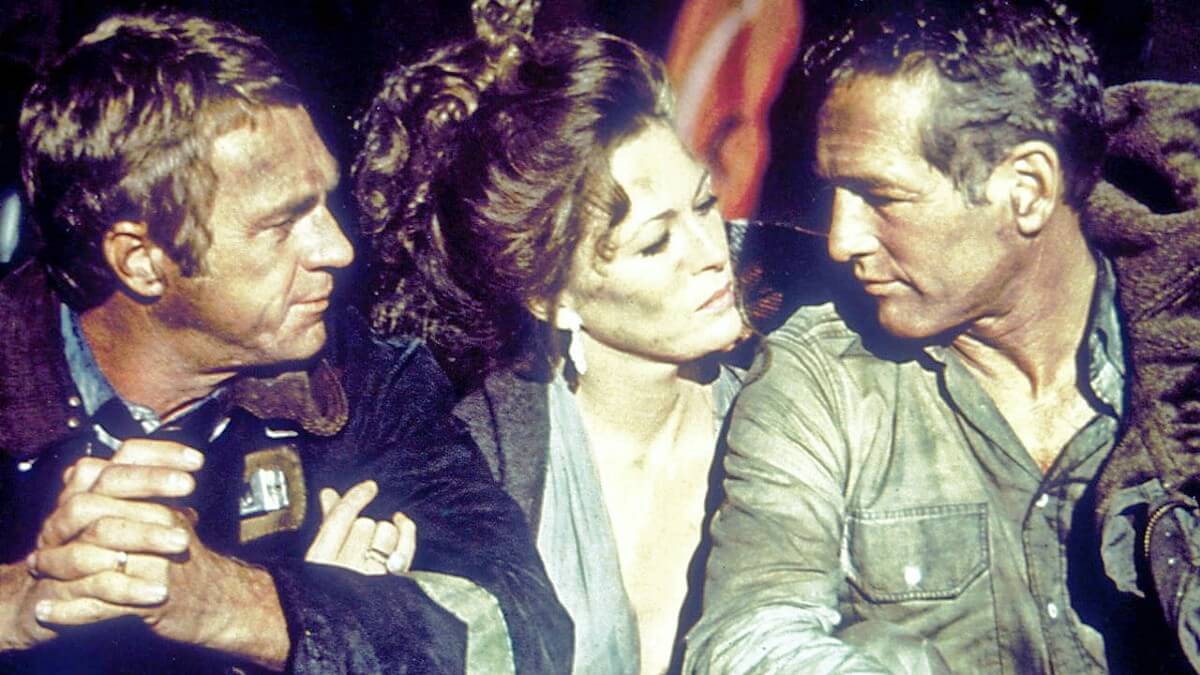 Like the Poseidon Adventure, The Towering Inferno features an all-star cast, led this time by megastars Paul Newman and Steve McQueen.

The story was adapted by Stirling Silliphant from two novels, The Tower (1973) by Richard Martin Stern and The Glass Inferno (1974) by Thomas N. Scortia and Frank M. Robinson.

The action gets underway when fire breaks out on the 81st floor at the opening of the world’s tallest building, the 138-story Glass Tower.

The film earned a nomination for the Academy Award for Best Picture and was the highest-grossing film of 1974.

The Swarm is based on Arthur Herzog’s 1974 novel.

It follows a scientist and group of soldiers who try to prevent a Texas-sized swarm of killer bees from invading the city.

The film received overwhelmingly negative reviews from critics and was a box-office bomb.

In fact, it is considered one of the worst films ever made. 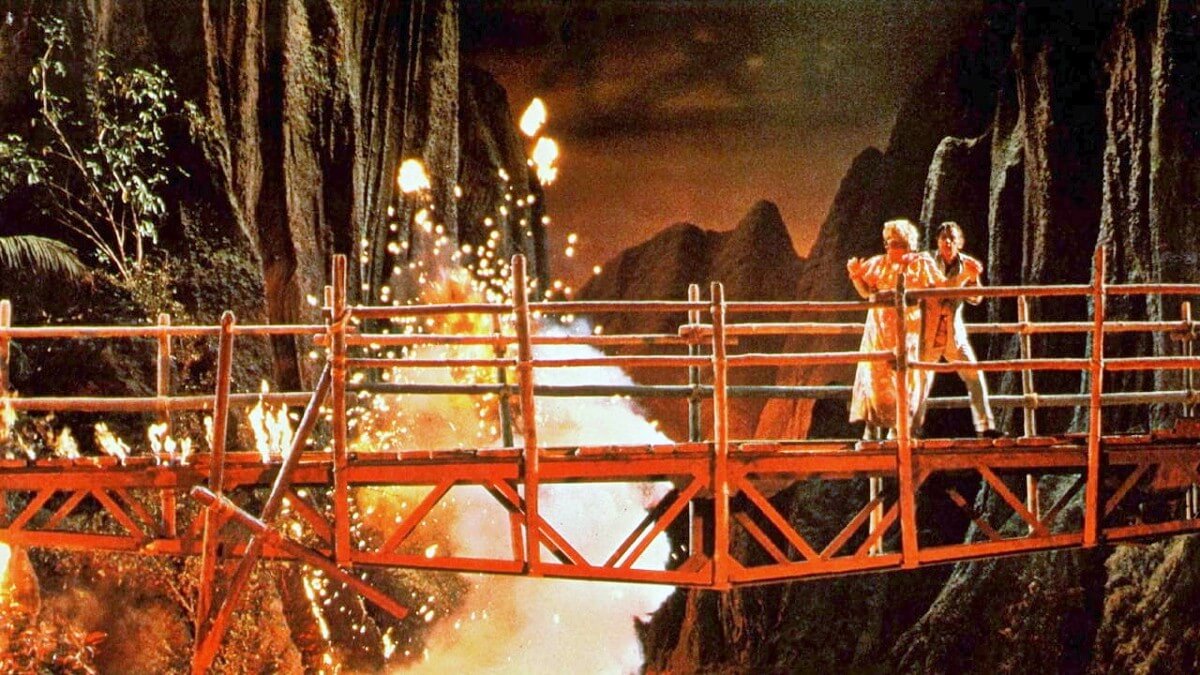 Time really did run out for Irwin Allen with this film.

When Time Ran Out tells the story of a volcanic eruption on a remote Pacific island and subsequent tidal wave.

The film was a commercial flop and Allen’s last theatrical release, and is often regarded as the final 1970s era disaster film.

CHECKOUT: American Ultra: It’s got cult written all over it

Irwin Allen’s productions include some hits and misses, but they’re worth checking out.