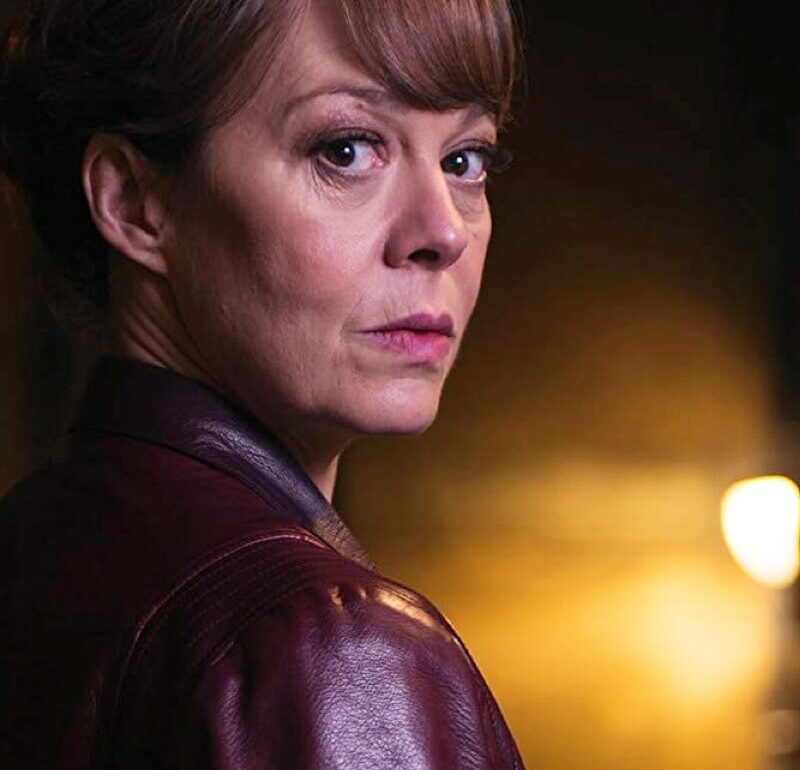 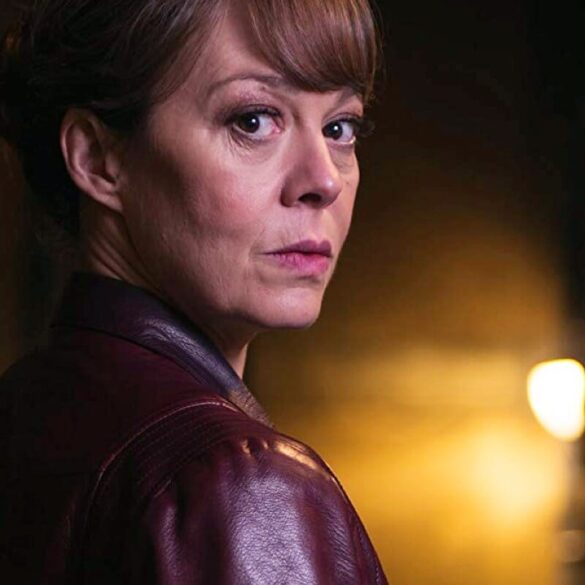 Fearless is a six-part British crime drama about a lawyer fighting for the release of a man convicted of the murder of a schoolgirl years earlier.

After she is approached by the convicted man’s fiancee (and mother of his son), human-rights lawyer Emma Banville (Helen McCrory) agrees to take another look at the case.

Convict Kevin Russell (Sam Swainsbury) is serving a life sentence for the murder of Linda Simms, 15, assaulted and buried alive at the school where he worked as a janitor 14 years earlier in February, 2003.

After visiting the school and reviewing evidence, including an audio tape of Russell’s confession, Banville believes that Russell is innocent and the confession clearly coerced from him.

Forensics show the dead girl had inhaled soil with traces of jet fuel before she suffocated, leading Banville to suspect the teenager had originally been buried at a nearby air base in Suffolk.

At the time of the murder, it was being used by the Americans a staging site in the lead up to the Iraq War.

The problem is, everyone else would prefer to let sleeping dogs lie — to leave Russell rot in gaol.

That includes the dead girl’s parents who tip off the press to a request for the girl’s body to be exhumed, leading to Russell’s assault in prison and the harassment of his family.

In the face of strong opposition, Banville succeeds in getting Russell’s conviction overturned, but he must face a second trial.

The cop in charge of the original investigation, Detective Chief Superintendent Olivia Greenwood (Wunmi Mosaku), is convinced she got the right man and will do all she can to keep him in gaol.

Fast forward and these days Greenwood is part of the Counter Terrorism Command (CTC).

Once she gets her teeth into a case, she won’t let go — no matter what.

But it takes a heavy toll on her personal life, as the case threatens to jeopardise her application to adopt a child, with boyfriend Steve Livesey (John Bishop).

Then there’s her father who is dying of cancer and a Syrian refugee and her baby for whom she has been advocating — all at the same time.

As the investigation digs deeper and treads on more toes, it becomes apparent that other forces are at work, forces that will stop at nothing to hide the truth.

McCrory’s portrayal of the lawyer is superb, delivering a character that is at once commanding but surprisingly vulnerable — oblivious to the danger she faces.

You might remember her as Narcissa Malfoy in Harry Potter and the Deathly Hallows — Parts 1 and 2.

The series also features John Bishop as Banville’s boyfriend Steve Livesey and Jonathan Forbes as her investigative assistant Dominic Truelove, along with Michael Gambon as the former Deputy Secretary to the Cabinet Office — Sir Alastair McKinnon.

Robin Weigert is a standout as CIA operative Heather Myles.

Filmed in London and East Anglia the series was created by screenwriter Patrick Harbinson who’s previous credits include the long running shows Homeland, Person of Interest and 24.

Well written and well acted Fearless ticks all the boxes.

It’s another one of those great thrillers that the British seem to excel at, starting off slowly but steadily gaining momentum — like a bushfire burning out of control.

You can catch Fearless on Stan.

There’s just the one season of six, 45-minute episodes.

Although the show received positive reviews and McCrory was praised for her performance, it reportedly failed to meet expectations and was not renewed.

What were they thinking?

CHECKOUT: Gangs of London: It’s kill or be killed

CHECKOUT: Nitram: So, that’s what it’s all about?

Who killed Linda Simms. Was it the janitor or the CIA?