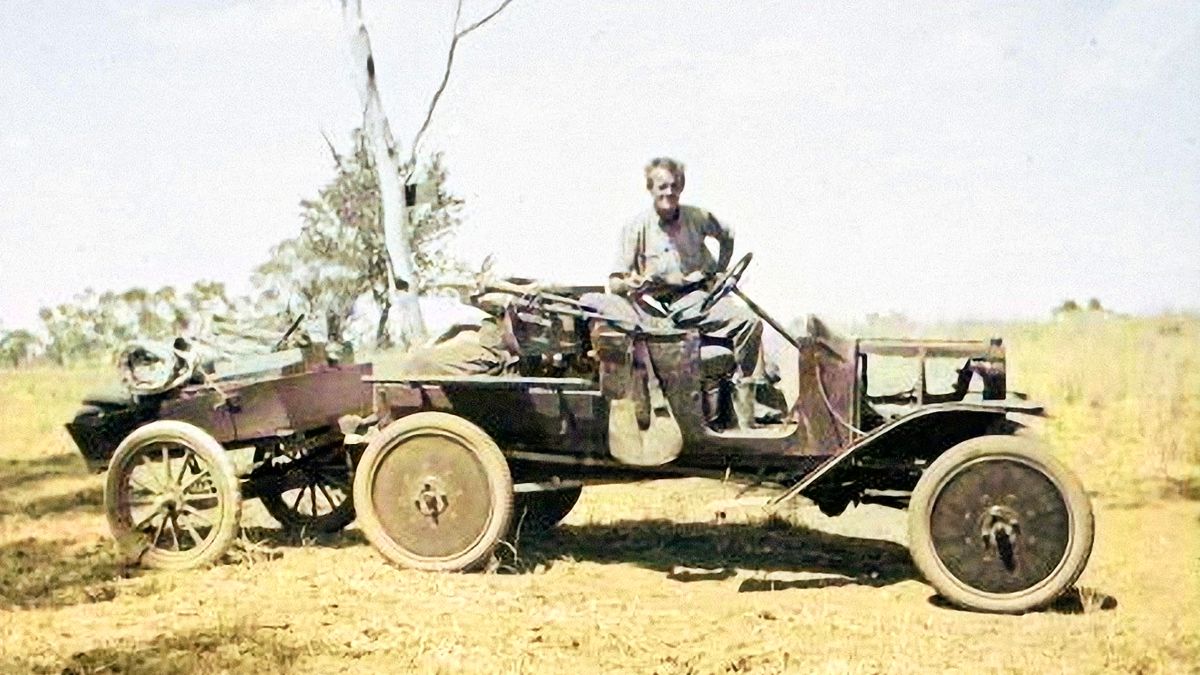 HALLS Creek and Tennant Creek are small settlements about 1000km apart, both in univiting, arid conditions, in the proverbial middle of nowhere.

The former is in Western Australia’s East Kimberley region, Tennant Creek in the Northern Territory, and both feature strongly in Tracks of Destiny, one of the classic works of Ion Idriess — one of the nation’s most prolific authors of yesteryear.

The book, back in print after 60 years, details the travels of Idriess in 1932, during the Gold Rush era, his own experiences and his many chats with characters of the time.

Readers are taken back to a period when there was no TV, no radio, no sealed roads and when vital services, such as doctors and police — were often hundreds of kilometres away.

Early arrivals had to cope with hostile indigenous tribes, many of whom had never seen white people before — and there were a lot of casualties as the newcomers battled hardships they could never have imagined.

There were also a few bush doctors, some who concocted a heinous brew simply called Fever Mixture to deal with malaria, and there was one who had his own ‘three-in-one’ ointment that fixed any skin ailment.

He was a much-loved character who rewarded Aborigines who brought him the main ingredient: goanna fat, with a cut of Nigger Twist tobacco (cut with the same lancet that he used to operate on his patients).

To sharpen it, he’d spit on the blade then rub it on a half brick to ‘give it an edge.’

There’s a harrowing account of vicious revenge by an indigenous man whose wife had been stolen by a man from a distant tribe.

The wronged man spent years tracking his adversary and the episode ended in a bloody massacre.

Gold was discovered at Halls Creek, but didn’t last more than a few months.

But Tennant Creek popped up as a new gold field and it was only about 1000km away.[irp]

Tales of prospectors and miners are plentiful and colourful, including an extraordinary one of a rich find by a blind miner.

But it was tough going. There was a lot of gold, but mostly contained within rocks.

Transport to a mill was a problem because the nearest mill was in Port Augusta — some 1700km to the south.

In that desolate town, most miners had days when they realised water was more valuable than gold.

Idriess also provides a lot of detail about the hunt for Terry, one of the most devious and ingenious criminals of the time.

In the same period, Australia was undergoing remarkable progress, primarily in the form of the internal combustion engine, which led to cars and trucks starting to traverse tracks that eventually became roads.

Aircraft soon followed and by the time Idriess published his very readable work, Russia’s Sputnik had soared into space and was circling the Earth.

Tracks of Destiny makes readers realise how fortunate we are these days.

When he returned from the First World War, Idriess wrote The Desert Column, about his experiences with the 5th Light Horse.

Prospecting for Gold was his first major successful work; it immediately sold out and was reprinted constantly in the following years, as were many of his books.

Idriess spent much of his life travelling throughout Australia, collecting material for his true-life stories, including Flynn of the Inland, The Red Chief and Nemarluk.

He was awarded the O.B.E. in 1968 for his contribution to Australian literature.

Published by ETT Imprint, Tracks of Destiny, with many period pictures, runs to 206 pages.

It costs $30 and will be in bookshops from November 1.