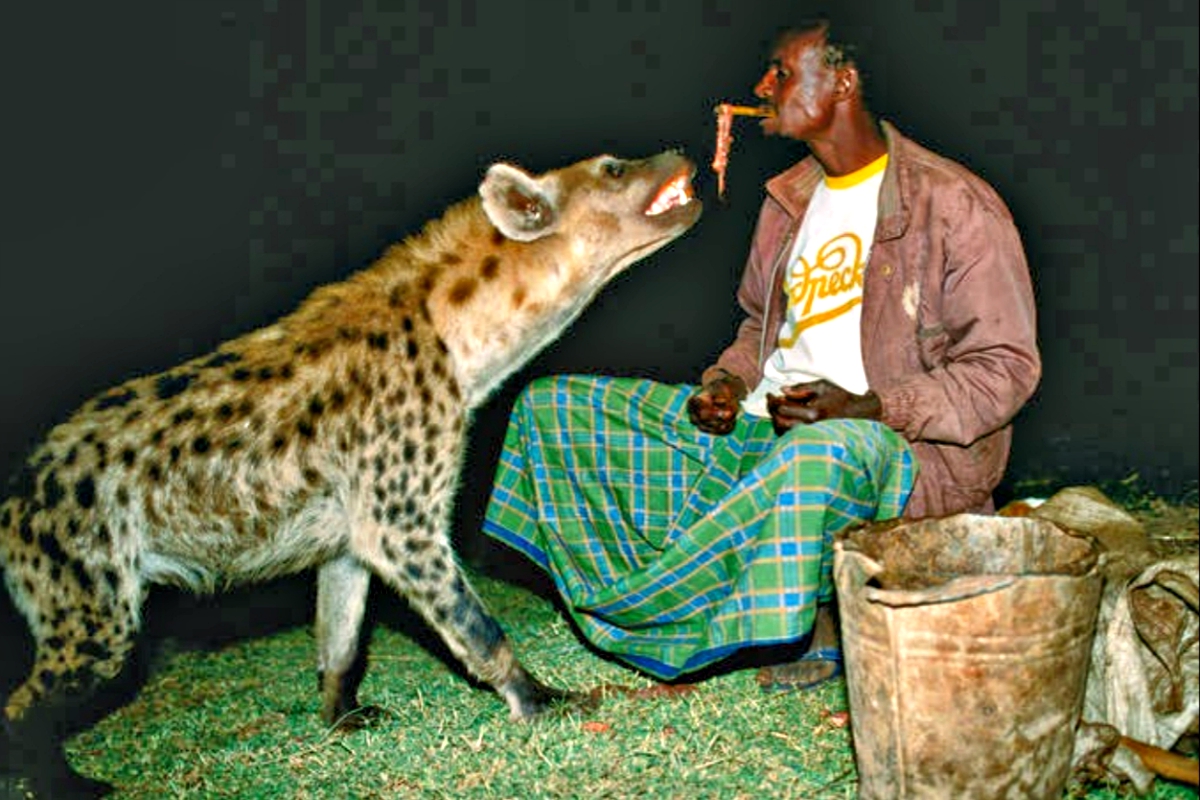 MENTAL health issues seem to be on the rise throughout the world.

While most people go to doctors or other medical professionals for initial consultations, they have a very different approach in Somalia.

Rather than proven western psychiatric measures, there’s a growing trend in the African nation to have a chat with Dr Hyena.

A chap called Mohamed Sheikh Yakub was a recent patient.

He had been troubled ever since his divorce, so he attended a session with Dr Hyena — in the hope the growling, caged animal would frighten away the evil spirits.

The traditional treatment, rooted in the belief that hyenas can devour the ‘jinns’ or spirits widely blamed in the region for depression and mental illness — takes place in a sweltering shack in Somalia’s capital Mogadishu.

The Horn of Africa nation, which has suffered decades of civil war, has only three trained psychiatrists among its 15 million population.

In the absence of conventional therapies, many people are turning to traditional healers including Yakub’s exorcist, a spry 70-year-old called Aden Igaal who goes by the name of Dr Hyena.

Medics at the capital’s Turkish-funded Erdogan Hospital say there is no scientific basis for the treatment.

“I am trying to educate them to not go to the hyenas,” he said.

But patients at Dr Hyena’s shack and their families say they have little choice given the shortage of alternatives.

Fatuma Ahmed took her 13-year-old daughter to Dr Hyena after giving up on other avenues.

“I took her to every hospital in Mogadishu, but wasted my money. It was hopeless,” Ahmed told Reuters.

But, she says, the treatment worked.

In the past, other healers often locked patients in rooms with unrestrained animals, Dr Hyena said.

His use of a cage means there haven’t been any injuries since he started his practice four years ago.

A hyena named Ali, believed to exorcise evil spirits that cause mental illness, consults from his cage inside a treatment room in Hodan district of Mogadishu.

Patients have red thread tied around their little fingers to stop the spirits from slipping away temporarily before the hyena can deal with them properly, he says.

Igaal got into the business after his sister was treated by a traditional healer.

He found a hyena pup for sale for $2500, nicknamed it Ali and set up shop, charging people $20 a session — still pricey in a city where a soldier gets $200 per month.

Back in the treatment shack, the hyena swings its head around and snuffles against the cage’s narrow bars.

But Mohamed Sheikh Yakub shows no sign of improvement, remaining listless and withdrawn.

Dr Hyena stops the session after few minutes, saying his animal has not managed to detect any spirits.

“Some conditions are not caused by jinns,” he said.

But Yakub should come back three more times, just to make sure.

CHECKOUT: Billionaire astronaut has a shot a love