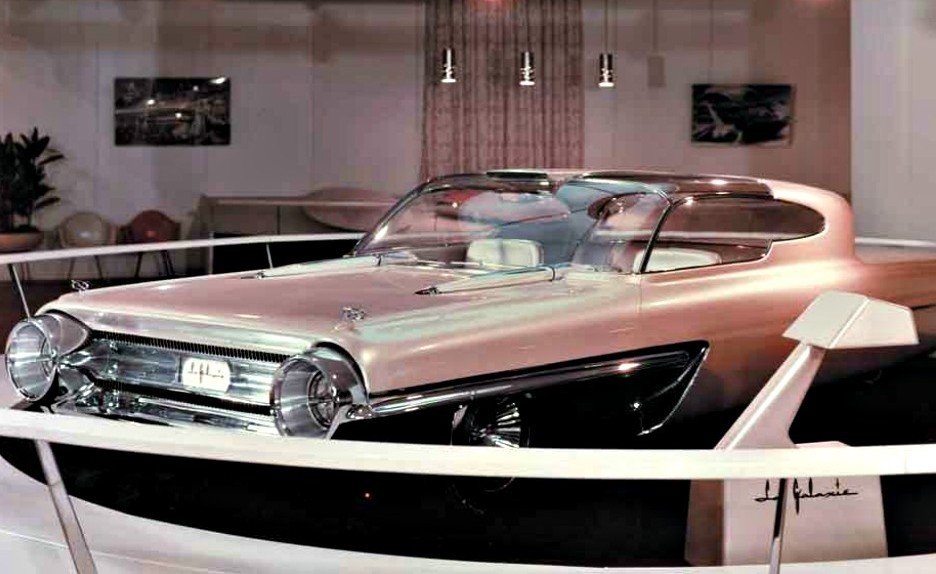 It was designed primarily by David Ash and featured space age and jet plane styling themes.

It toured the USA and European auto shows before being destroyed around 1960.

When shown the La Galaxie was usually surrounded by a number of small scale model “design idea” cars.

The car was supposed to have parallel opening doors, but they were never fitted.

It was not an operational vehicle.

The dashboard was suitably space age, too.

The steering “wheel” was rectangular.

Much of the La Galaxie’s styling was transitioned to Ford’s production cars and its name became synonymous with full-sized American Fords from 1959-1974.

The car’s front end was re-purposed on to the rear end of 1959-1964 full-sized Fords in various permutations.

Meanwhile, the whole car was taken by ex-Ford stylist Elwood Engel, when he became design boss at Chrysler in 1962.

That company’s famous Turbine car, resplendent in orange and black, is basically the La Galaxie re-imagined — and not too subtly, either.

The La Galaxie’s front end was also seen on the front of the 1963 American dodge Dart — another Engel effort.

And American Motors thought it was good enough for their 1964 Rambler American model’s front, too.

In fact, the Dodge and the American look like they were separated at birth.

But that is another story.