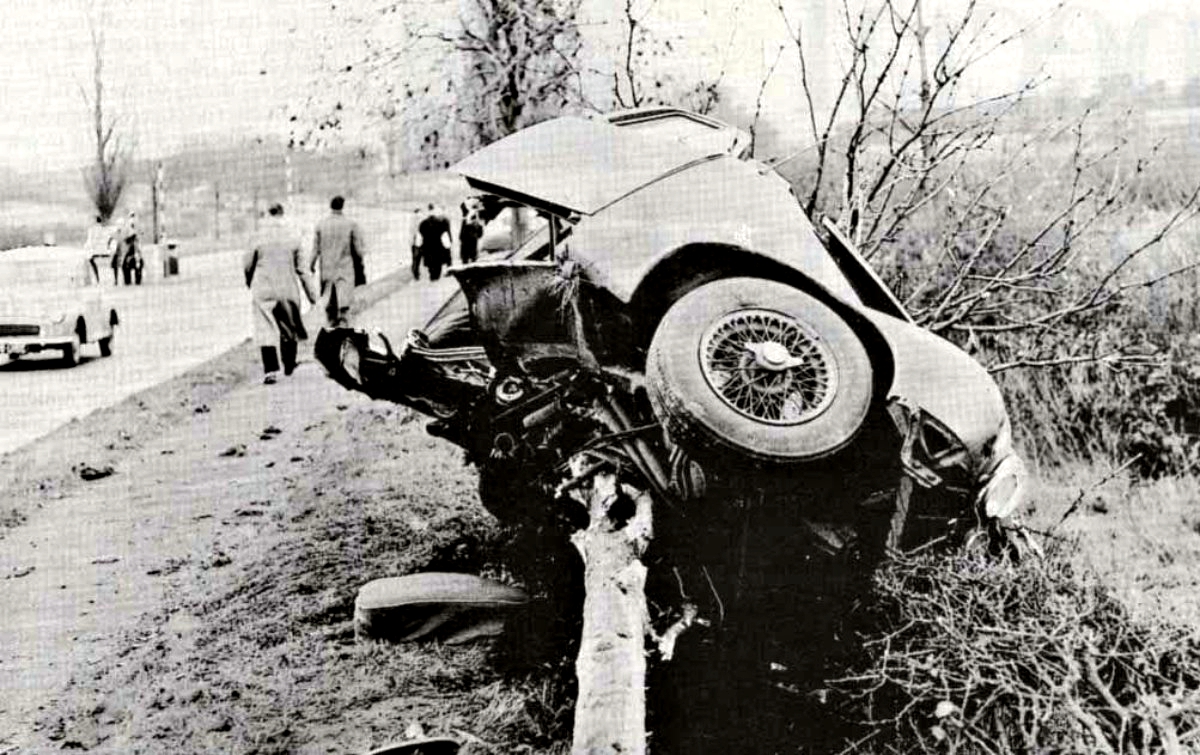 F1 stars who met death on the road

DEATH was a frequent visitor in the early days of Formula 1.

Yet two, who became world champions, did not meet their maker on a circuit — they died driving their own cars on public roads.

The lives of Giuseppe Farina and Mike Hawthorn were also linked, albeit briefly as teammates in the 24-hour enduro at Spa-Francorchamps, as well as being involved directly in multiple spectator deaths.

Italian aristocrat Giuseppe ‘Nino’ Farina was, in fact, the world’s first Formula 1 World Champion, the title won in 1950 when he was driving for Alfa Romeo.

The nephew of famous designer Pinin Farina, Nino completed his national service in the Italian cavalry before graduating from Turin University.

His dad, Giovanni, was a coachbuilder and into amateur motorsport and Nino followed.

He drove a twin-cylinder Temperino when he was just nine.

The Temperino was a car that looked somewhat like a kiddie’s pedal car, but was the real thing.

Many had bodies built by Stabilimente Farina, Nino’s dad’s business.

Nino had his first taste of competition — and the first of his many crashes — while still at uni at the wheel of his 1500cc Alfa Romeo in the 1925 Aosta-Gran San Bernardo Hillclimb.

Trying to outperform his father, he ran off road, broke his shoulder and suffered facial cuts.

Giovanni was more careful and came fourth in the hillclimb.

Nino got seriously stuck into motorsport in the early 1930s, driving private Maseratis and Alfa Romeos for the next two seasons with such success that he became known to the great Tazio Nuvolari, and joined him at Scuderia Ferrari in 1936.

Nino was involved in a crash in the 1936 Deauville Grand Prix in which French star Marcel Lehoux was killed.

Lehoux, who was one of Bugatti’s best drivers, was at the wheel of an ERA that day.

At three-quarter race distance on the awful street circuit in Normandy, Farina was overtaking ERA for second-place when his Alfa’s front wheel clipped the ERA’s left rear wheel.

Both rolled but while Farina had only minor injuries, Lehoux was thrown from his car, smashing his skull and his car caught fire.

It was the second death in that event. Raymond Chambost died after he rolled his Maserati on a corner.

In 1937, Farina had more successes and was named Italian Champion for the first of three successive seasons.

Next year, Farina was at the centre of another tragedy.

In the Tripoli Grand Prix, he was lapping Hungarian driver Laszlo Hartmann’s Maserati 4CM for the second time when there was another touch of wheels and both crashed.

Farina and two spectators were injured but Hartmann suffered a broken spine and died  a day later.

Then came the war years, but some racing continued and Farina starred in the wet 1939 Swiss GP when his Alfa Romeo 158 voiturette (smaller capacity racers) ran among the Grand Prix cars before slipping to sixth at the finish when the road dried.

Some racing continued in Italian territories into 1940 despite the onset of war in Europe.

In what was his last appearance for six years, Farina led in an Alfa Romeo 1-2-3 in that year’s Tripoli GP.

No longer a young man and with his best years lost to the war and service as a tank officer, Farina returned to Alfa Romeo in 1946.

His 158 Alfetta won the GP des Nations on his return at Geneva.

He crashed a Ferrari 125 Corsa during practice for a sports car race in 1947 and was side-lined for the rest of the season.

He returned with a privately-entered Maserati in 1948 and began the year by winning at Mar del Plata at the Palermo circuit in Buenos Aires, followed a fortnight later by a win in Monaco.

Alfa Romeo then signed Farina for the inaugural F1 World Championship in 1950.

With Luigi Fagioli and the then emerging Juan Manuel Fangio as teammates, Farina, then aged 43, won the opening Grand Prix at Silverstone.

More success followed in Switzerland and Italy, with Farina clinching the world crown  at Monza.

Alfa Romeo withdrew from racing after the 1951 season, so Farina moved to Ferrari for 1952.

Teammate Alberto Ascari was the class of the field, but Farina was still championship runner-up with second-place finishes in Belgium, France, Germany and Holland.

Then, in 1953 but was involved in an awful mishap during the Grand Prix of Argentina.

A small boy somehow wandered on to the track as Farina approached and in avoiding the youngster, the car careered off-circuit and into the crowd, killing nine spectators.

His only GP win that season was in the German Grand Prix, here he got past Fangio and Mike Hawthorn in what was to be his last in a championship race.

He began 1955 with a courageous second place in the Argentine GP, run in the hottest conditions in race history.

He’d earlier broken his arm while driving in the Mille Miglia ad crashed again while trying to avoid errant spectators, and that was followed by severe burns to his legs when his sports car burst into flames while practising for the Supercortemaggiore at Monza.

Back in the GP car, he ran fourth at Monaco and third in Belgium in his final GP.

With his racing days over, Nino worked for the distributors of Jaguar and Alfa Romeo in Italy, became chairman of the Turin Automobile Club’s competition committee and had some input at Pininfarina.

Ten years later, he was on his way to a commentary job at the French Grand Prix.

En route to the circuit, he was at the wheel of his Lotus Cortina, probably in his usual win-or-die style, lost it on a bend near Chambery and crashed into a telegraph pole.

Enzo Ferrari summed him up well:

“He drove as if the devil was behind him and angels ahead.

“He was like a high-strung thoroughbred, capable of committing the most astonishing follies.

“As a consequence he was a regular inmate of the hospital wards.”

The wide-smiling Hawthorn, who usually wore a bow-tie while racing, made his competition debut in 1950 in his 1934 Riley Ulster Imp, winning the 1100cc sports car class at the Brighton Speed Trials.

He had several more sports car victories and moved to single-seaters in 1952, winning his first race that season in a Formula 2 Cooper-Bristol at Goodwood.

More wins followed for the dashing young Brit and he was soon offered a works drive by no less than Enzo Ferrari.

He made his Formula 1 debut at the 1952 Belgian Grand Prix at Spa-Francorchamps, finishing fourth.

By the end of the season, he had already secured his first podium, with a third place at the RAC British Grand Prix.

In 1953 season he shone at the French Grand Prix at Reims in what became known as  ‘the race of the century’ when he got past the great Juan Manuel Fangio to snatch the win.

He also won a number of major sports cars races, among them the 24 Heures de Spa Francorchamps with his Ferrari teammate.

Then came the 1955 Le Mans 24-Hour which turned out to be motorsport’s blackest day, in which veteran French driver Pierre Levegh and 84 spectators perished.

Hawthorn had joined the Jaguar racing team, replacing Stirling Moss, who had left for Mercedes.

After overtaking Lance Macklin’s Austin-Healey on the main straight, Hawthorn suddenly braked in front of him after spotting an instruction to pit for refuelling.

It caused Macklin to swerve to avoid running into the back of Hawthorn’s D-Type Jaguar, but put him directly into the path of Levegh’s Mercedes.

After colliding with the Healey, the Mercedes shot over an earth embankment separating the grandstand from the track, bounced through spectator enclosures, then hit a concrete stairwell parapet.

The impact shattered the car, which then somersaulted, pitching debris into the spectator area, before landing atop the earthen embankment.

The  bonnet, engine and front axle, which separated from the frame, scythed through the crowd.

Eight hours later, while 1.5 laps ahead of the Jaguar team, the Mercedes team withdrew from the race as a mark of respect for the dead.

Jaguar declined an invitation to join them, and went on to win.

An official inquiry ruled that Hawthorn was not responsible for the crash, and that it was merely a racing incident.

The death of so many spectators was blamed on the inadequate safety standards of the track design.

The track was largely unaltered since the inception of the race in 1923, when the top speed of cars was typically around 100km/h, but by 1955 cars were hitting more than 270km/h.

However, the circuit had been resurfaced and widened post-war.

Back in Formula 1, Hawthorn had meanwhile left Ferrari to race for the British Vanwall team, but switched to BRM for 1956.

It was a bad move, with the car’s lack of reliability and poor management leading to Hawthorn walking away from the team and back to Ferrari, where he became mates with Peter Collins, a fellow Englishman and Ferrari team driver.

During the 1957 and 1958 racing seasons, the two became engaged in a fierce rivalry with another Ferrari driver, Italy’s Luigi Musso.

Hawthorn won the 1958 French Grand Prix at Reims, in which Musso was fatally injured while in second place.

In a strange twist, Hawthorn won the 1958 Formula 1 Championship despite achieving only one win, in contrast to Stirling Moss with four.

In the Portuguese Grand Prix at Porto, Hawthorn was disqualified for bump starting his stalled car downhill in the opposite direction, on the way to a second-place finish.

But Moss intervened on his behalf and the stewards’ decision was reversed.

Hawthorn went on to finish second, behind Moss., but he gained an extra point for setting the fastest lap.

In the final race, the 1958 Moroccan Grand Prix, Hawthorn drove a tactical race aiming to stay ahead of Moss’s Vanwall teammates.

Tony Brooks’s car broke down while leading Hawthorn, and Stuart Lewis-Evans in the third Vanwall crashed after a desperate attempt to challenge Hawthorn running third.

In the last laps, second-placed Phil Hill slowed and waved Hawthorn through to gain enough points to take the Championship; the first ever won by an English driver.

In a surprise decision, he then announced his retirement, due to the Le Mans tragedy and the death a few months earlier of his mate, Peter Collins. Both weighed heavily on his mind.

On 22 January 1959, only three months after his retirement, Hawthorn died in a car accident on the A3 Guildford bypass while driving his modified 1958 Jaguar 3.4-litre saloon to London.

Hawthorn was apparently having a dice with Rob Walker, who was driving a Gullwing Merc 300SL.

They were on a wet road when they entered a dangerous section of the bypass.

Hawthorn’s Jag clipped a bollard, spun across the road, bounced off a Bedford truck and ran straight into a tree, uprooting it.

Hawthorn, said to be travelling at around 130km/h at the time, suffered fatal head injuries.

The impact forced him into the Jag’s back seat.

Mike Hawthorn never married, but fathered a son, Arnaud Michael Delaunay, by a hot young lass he met in Reims after winning the French Grand Prix in 1953.