A new book about the epic 10,000-mile London to Sydney Marathon opens with sensational claims that the race leader Lucien Bianchi’s Citroen was deliberately crashed into by a private motorist on the last day in a wanton act of sabotage.

Coinciding with the 50th anniversary of the running of the “the world’s greatest road race”, storyteller John Smailes has launched his beautifully told and researched Race Across the World, the mad and dramatic, and ultimately scandalous, 1968 London to Sydney Marathon.

Inconceivable as an idea in today’s times, the marathon was an alcohol-fuelled notion dreamed up by some big hitters from the British media and business. As Smailes writes, it was going to be the most magnificent spectacle ever staged, attracting entries from global car makers, and it would be won, of course, by a British brand. There will always be an England. Land of Hope and Glory. Optimism, jingoism or whisky?

On November 24, 1968, competing crews – all 98 of them – set forth on what organisers boldly billed as the world’s greatest automotive adventure. It was surely the most ambitious, given the political volatility of some of the regions along the near 17,000km route. Nearly four weeks later, half the field wobbled into Sydney. 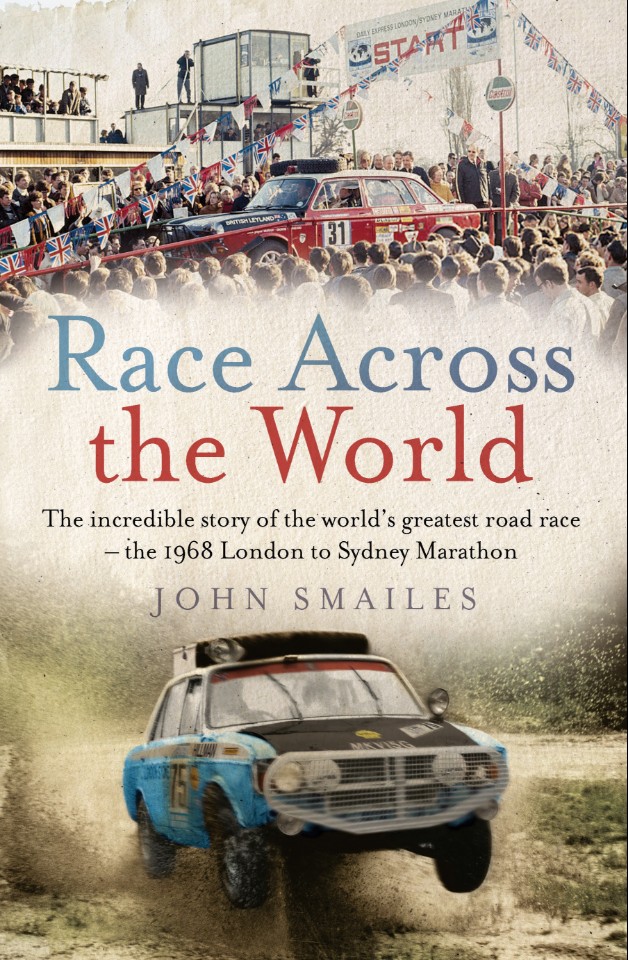 In 1968, Smailes was a keen, car-mad young journalist with Frank Packer’s Daily Telegraph, which bookended the Daily Express as co-backers of the marathon. The Sydney newspaper was going all out. Race driver David McKay, the paper’s motoring editor, had also entered a Daily Telegraph Holden Monaro V8 team in the marathon.  A small team of Tele journalists and photographers, overseen by editor-in-chief David McNicholl, was to follow the event. The raw Smailes was picked for his enthusiasm and motor sport knowledge.

It was a few weeks that proved to be a real life changer for Smailes, honing his writing craft and giving him a world view of exploration. As well, he and McKay later collaborated on a hastily written book to capitalise on the controversial marathon, called The Bright Eyes of Danger.

Race across the World is the follow up, more detailed, more reflective and certainly more controversial.

After a manic blast across Australia which eliminated or wounded many of the challengers, superstar Bianchi and Jean-Claude Ogier held a narrow advantage in their Citroen DS21 into the final day, just hours from the finish at Warwick Farm racecourse. Ogier was driving when the Citroen collided at speed with a Mini driven by a member of the public travelling the wrong way on the gravel rally stage near Braidwood. Belgian Bianchi, Formula One driver and winner of the 24 Hours of Le Mans that same year, was trapped in the mangled Citroen.

Amid wild unsubstantiated rumours including one that the occupants of the Mini were drunk off-duty police, Scot Andrew Cowan, Brian Coyle and Colin Malkin inherited the victory in their Rootes factory Hillman Hunter.

Nearly 50 years on, Smailes went hard in search of the truth.

“It was always in the back of my mind to write the real story of the marathon,” says Smailes, who had to face the reality that key people were no longer alive, and that recollections can fade or become embellished. There was no input from Bianchi, tragically killed during Le Mans testing in early 1969, just months after the marathon finished.

Even when absorbed in the compelling tale of the 1968 marathon, it is impossible not to wonder where Smailes unearthed the countless fascinating vignettes he drops into the pages.

It helps that the anal Smailes was and is a meticulous keeper of notes and observations. While most of the detailed proceedings from the marathon half a century earlier were neatly typewritten and filed orderly, late last year the author headed off to Europe to talk face-to-face with a handful of the marathon’s key figures, most importantly winner Cowan, Ogier, and the second placegetter Paddy Hopkirk, who was runner-up in a works Austin 1800.  He also talked with Ian Vaughan, the best-placed Aussie who took third in his works Ford Falcon GT. Finally he spoke with Tommy Sopwith, who came up with the initial crazy idea and took it to media owner Sir Max Aitken, a car guy and a Battle of Britain hero drawn to excitement…

Aitken loved the idea of a marathon car race to prove that Britain was still great.

Sydneysider Smailes is a veteran ex-tabloid newspaper journalist who created his own successful public relations/marketing/media consultancy before returning to his writing roots with an acclaimed book about race driver Allan Moffat.

Race across the World came together swiftly. He pitched it to Allen & Unwin in August last year, got the green light and delivered the required 80,000 words in January.

“The crash was deliberate,” Ogier insisted. Smailes, who understands better than most when he has a fantastic yet perhaps credible assertion to play with, opened the book with the Frenchman’s lurid claim.

Ogier recalls much detail. The road was narrow, but with just enough room to pass. The Citroen was in the centre of the road but moved out of the path of the Mini. But the Mini kept coming, slamming the rally car right front to right front.

Ogier’s arcane conspiracy theory extends to the red-hot rivalry between the factory teams entered by British Leyland, Citroen, Ford, BMC Australia, Porsche and Rootes Motors. Not every squad had heard of fair play.

Ogier’s unshakeable belief that the Citroen was a victim of foul play was fuelled by a throwaway comment at the finish from Aitken, the chairman of the sponsoring newspaper and the father of the marathon: Realising the win was now going to a British car, Aitken observed: “Thank God. It would have been a disaster if it had been won by a Frog or Kraut.”

The sabotage theory couldn’t be totally ruled out. But Smailes did what no-one else did back in the day; he went off to find the two locals who were in the wayward Mini that took out Bianchi and Ogier. 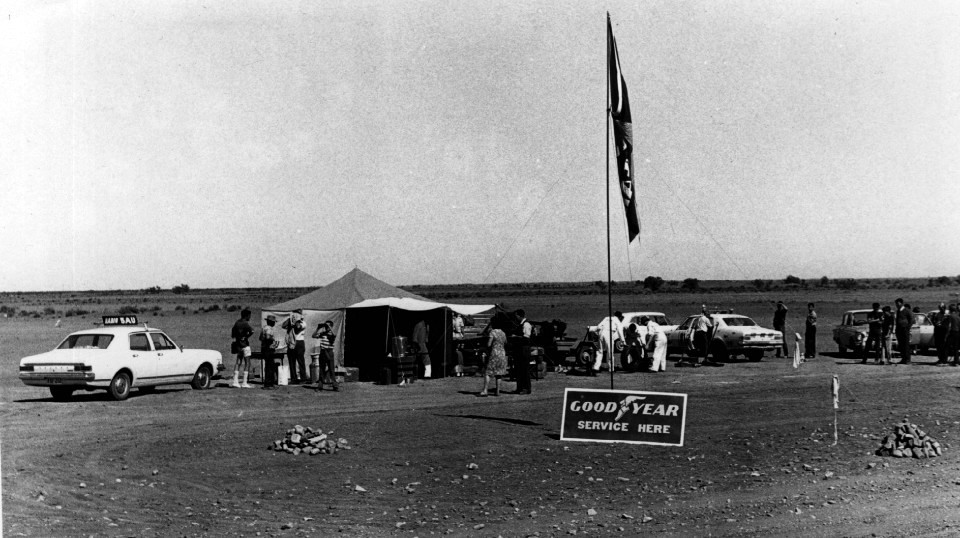 Greg Stanton and Allan Chilcott were the teenagers in the Mini. Car club members, they set out from their homes in Campbelltown to check out the marathon cars at Nowra.

Speaking to a journalist for the first time about the crash that eliminated the leader, Chilcott told Smailes he and his mate Stanton, who died some years ago, had made a pact not to talk.

With Stanton dead there seemed no good reason to keep the cone of silence. Chilcott dismisses much of the innuendo relating to the crash.

They were enthusiasts looking for a good vantage spot near a creek crossing. No-one tried to stop them entering the stage. They weren’t speeding.

He denies Ogier’s insistence that they were wearing four-point harnesses. They were three-point lap-sash belts. Both were injured and taken to hospital, ironically alongside Bianchi in the emergency ward. No-one came to see them. No press. No rally organisers.

Paddy Hopkirk told Smailes the NSW police should have been monitoring and controlling traffic out on the rally stages, rather than policing the main roads. “They’re a bunch of SS men,” declared the fiery Irishman.

It is hard to judge what market exists for a book on a car marathon that started on the other side of the world with 98 cars on November 24 all of 50 years ago. But there is endless wonderful stuff, so much intrigue, so many cute or telling anecdotes within the 352 pages.

Smailes carefully relates how the marathon was conceived, the harrowing and dangerous route planning and the personality clashes within some crews, and intense works team rivalries.

Younger motoring and motor sporting fans will begin to understand that driving cars a half-a-century ago was way freer. But especially across Asia, appalling roads and remoteness brought ever-present danger.

The marathon was huge news in the countries it touched, and elsewhere. Newspapers ran daily updates, often on page one, as Ford’s manic speedster Roger Clark set a merry pace in the race to Bombay, where the Chusan would accept up to 70 surviving cars and crews for the at-times bacchanalian sea journey to Fremantle.

The breakneck Australian leg crucified the tearaway Clark’s chances, his Cortina falling apart under him as he continued at maximum attack. He knew nothing else.

The Monaros and Falcons were supposed to come to the fore on their home territory but they had already had issues. Instead, a bunch of professional Euros led by Bianchi, Cowan and Hopkirk, went on the charge, while Vaughan emerged as the best among the throbbing local V8s.

Then that Mini changed the outcome.

Race across the World is a terrific addition to our understanding of now extinct marathon competition, replete with any number of  adventures, dramatic and sometimes fraught and now part of our automotive history and lore.