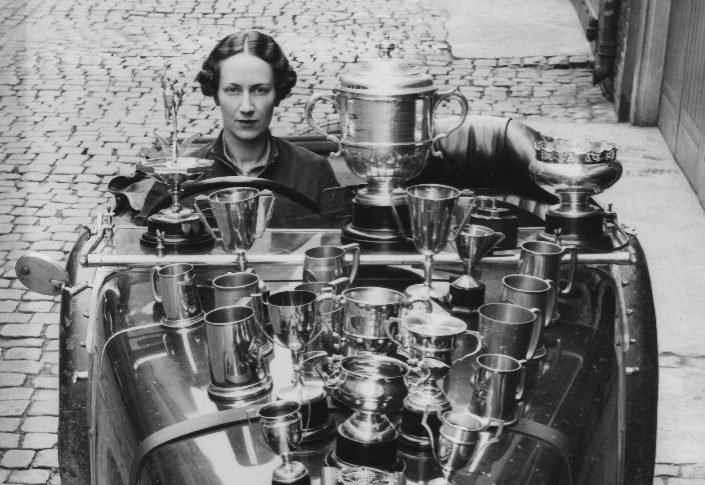 FEW people will remember The Argus, the newspaper that first appeared on the streets of Melbourne in 1846 — and closed in 1957.

It was a conservative publication, regarded as the ‘most Australian’ of all the papers of its era, and its data was seldom questioned.

So, when a 5cm report on one of its pages on January 24, 1952, mentioned that one F E Davis was the first Australian to compete in the famous Monte Carlo Rally, nobody questioned it.

The report was attributed to the AAP news agency.

The fortunes of  F E Davis, who was at the wheel of an Austin A70, are not known but most historians still believe he was the first from Down Under to take part in the Monte.

But the rightful bearer of that achievement was in fact Joan Richmond.

She competed in the Monte in 1932 — a full 20 years before Mr Davis had a go — but AAP and all the other news folk of the era, managed to miss it.

The lass, born at Cooma, in the Snowy Mountains, was in fact Australia’s first professional racing driver.

Joan went on to become a very well known and flamboyant competitor in Europe, driving factory-entered cars in a variety of top-ranking events.

Before WWII she was a motor racing legend in the UK and Europe, but despite her many successes in a sport regarded as a male preserve — she remained virtually unknown in Australia.

All the facts of her life can be found in From Melbourne to Monte Carlo and Beyond, a 255-page hardcover book by David Price, published in 2011 but apparently now out of print.

Born in Cooma in 1905 and raised in country Victoria, Richmond was enamoured by horse power from an early age.

She trained and rode her own horses in the 1920s, often competed and won at country towns such as Longwood, Euroa and Benalla, but when she entered a main race at Euroa one day — she was forbidden to compete.

Regulations did not allow women jockeys and she was told that until then she had been racing illegally.

Life looked gloomy, until a young airforce pilot she chatted to at a dance suggested she try motor racing, where there were no barriers against women.

So she acquired a little Citroen 5CV and took part in several events, even winning her class at a Geelong hillclimb, where her talent was spotted by the Melbourne Riley dealer.

Before long she had a Riley 9 and was competing in circuit races as well as hillclimbs and racing against all sorts, among them Amilcars, Bugattis, Salmsons, Austins, Ballots.

In 1931, she entered her Riley in the Australian Grand Prix at Phillip Island.

It was run on a handicap basis back then and Joan, at the wheel of a Riley Brooklands, finished fifth outright and second in class. Winner was Carl Junker, in a Bugatti Type 39.

Then the Monte Carlo Rally beckoned, but how to get from Melbourne to Monaco?

Car-carrying aircraft had not yet been invented, so Joan and Co simply took on an arduous transcontinental road journey that took all of five months.

She covered the 3750km of dirt from Melbourne to Darwin, then boarded a ship to Singapore, drove up through Malaya, crossed to Burma by ship, drove 2000km across India to Bombay, then via ship to Basrah, into Iraq, and across to Egypt via Syria, Lebanon and Palestine before finally reaching Italy and Monaco.

She also had to maintain the car en route, removing the cylinder head, regrinding valves, mending punctures and relining the brakes.

The Monte was then regarded as the world’s premier reliability event and Joan, after many a drama, finished 17th.

She also befriended the fabled Louis Chiron in Monte Carlo, who gave her invaluable lessons in car control.

Days later she had a call from Victor Riley, inviting her to share a car with the queen of Brit racing, Elsie Wisdom, in the two-day British 1000 Mile Race at Brooklands.

Against all odds, the girls won, to record the first time women had won a major international motor race against male competitors.

She was one of few drivers who excelled at both rally and circuit driving.

In all, she competed in seven Monte Carlo rallies, her best result a second in class in 1936.

She also took part in several Le Mans 24-Hour races, the Alpine Rally, plus many hillclimbs and races all over the UK and Europe, scoring countless wins and podium places.

Her prowess got her drives and prize money in Rileys, MGs, Singers, Triumphs, HRG,  Frazer-Nash, Talbot, AC and Fiat.

She also had a chat to Adolf Hitler — and later helped a Jewish family escape from Germany into Belgium.

The book has many fine photographs and is a first person account.

Joan Richmond returned to Melbourne in the latter half of her life, just after WWII, her racing days at an end, where she died in 1999, aged 94.

Hers is a story that, apart from setting the records straight, tells of a young lady’s determination and skills — and some personal tragedies.

Her collection of trophies and memorabilia went to auction in Melbourne a few years ago.

The book is still available at some online sites, priced at around $50.