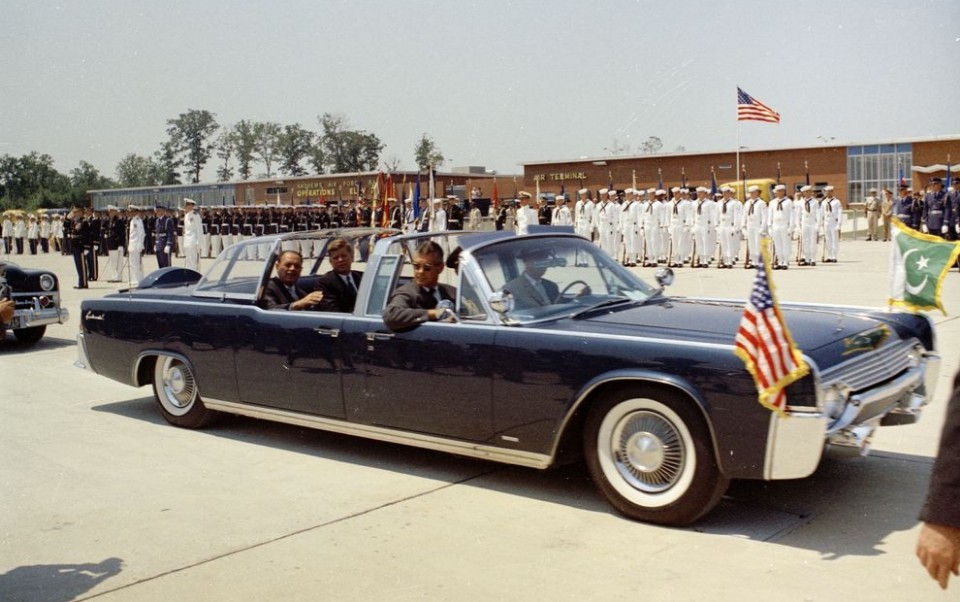 The first car specifically designed for use by the President of the United States was a 1939 Lincoln.

It was modified by coachbuilders Brunn & Company.

The Lincoln featured a V12 engine and was equipped with a siren, running lights, two-way radio and extra-wide running boards and grab handles for Secret Service agents.

The convertible roof was the reason for the car’s nickname, “The Sunshine Special”.

FDR, who was a victim of polio and confined to a wheel chair, favoured the convertible because it allowed him to appear in front of crowds without actually leaving the vehicle.

During World War Two it was given additional bullet proofing, 3cm thick glass and compartments to store machine guns.

Externally it was freshened with a 1942 Lincoln front end.

Next, in what would become an almost 50-year affinity with Lincolns, was Harry S. Truman’s 1950 four-door Lincoln Cosmopolitan convertible.

It boasted a clear “bubble” top of bullet proof glass.

Both the Sunshine Special and “bubble top” Lincolns are preserved in the Henry Ford Museum in Detroit.

The most famous of all the Presidential Lincolns is, of course, the convertible in which John F Kennedy was assassinated in Dallas on November 22, 1963.

The car was built in 1961 by the Hess & Eisenhardt Company of Cincinnati, Ohio, who specialised in limousine, ambulance and funeral car conversions.

Starting out as a standard Lincoln sedan, the chassis was lengthened by 30cm.

The car was designed to operate in three configurations: convertible, clear glass bubble top or a metal hardtop.

After Kennedy’s assassination you might think that the car would have been taken away and destroyed or put in storage and another car built.

It would have taken too long to design and construct a new car so Hess and Eisenhardt were tasked with quickly upgrading the car with more bulletproof armour and a permanent roof.

When it was completed the Lincoln was used by President Lyndon Johnston.

Many think the car is black in colour, but it is actually a very dark navy blue.

It can also be found at the Henry Ford Museum.

CHECKOUT: King has a thing about American cars too