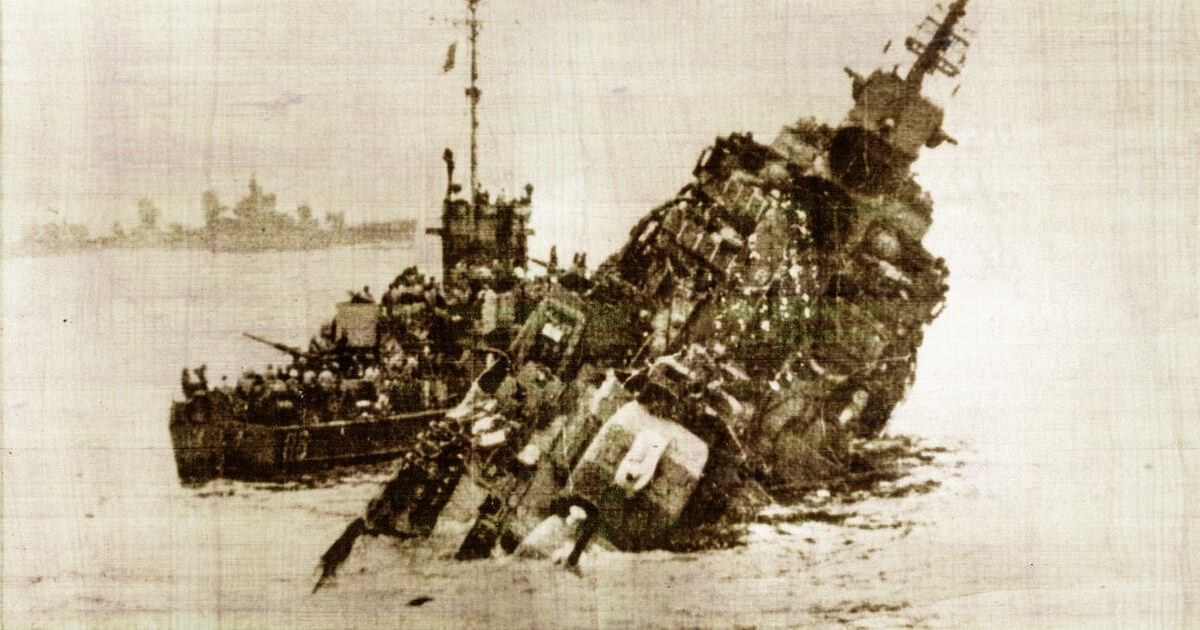 THERE are some famous WWII American warships like the USS Enterprise, the San Diego, Missouri and a dozen more.

But there’s no mention of the USS William D Porter, a ship the US Navy would dearly love to forget ever existed.

In fact, its history would make a terrific Hollywood movie, although more of a comedy kind.

But that, as they say in Biden country — ain’t gonna happen.

The USS William D Porter emerged from the shipyards as a Fletcher-class destroyer, named after a Civil War hero who stowed away on a warship at the age of 12 — then enlisted at 15.

Known to her crew as “Willie Dee,” the destroyer’s first mission was to join the battleship USS Iowa for escort duty.

But as she left port on November 12, 1943, her anchor got caught on a neighbouring warship and ripped out some of its railings, a life boat and other pieces of the vessel.

Undamaged herself, Porter rendezvoused with the Iowa and other destroyers for an important mission: escorting President Franklin Roosevelt to Tehran for meetings with Allied leaders.

For security, the ships had to maintain radio silence until they reached their destination, communicating only through signal lights.

A day into the journey, a sudden underwater explosion caused the entire formation to take evasive action, believing that they were coming under attack by an enemy submarine.

But as it turned out the explosion was caused by one of Porter’s depth charges, which had been armed, then accidentally rolled off the ship.

Shortly after, Porter was hit by a freak wave.

One sailor was lost, a boiler room was flooded and the captain had to break radio silence to tell Iowa why the destroyer was lagging behind.

A day later, President Roosevelt, a naval enthusiast who had served as assistant secretary of the Navy, asked for a demonstration of Iowa’s anti-aircraft capabilities.

The battleship sent up multiple target balloons, then gunners on deck set about shooting them down.

A few of the balloons drifted towards Porter, whose crew also shot them down.

The primers of the torpedoes were removed to ensure they wouldn’t exit the tubes when fired.

Porter got into position about 6km from Iowa and commenced its mock attack.

As planned, the first two torpedoes did not leave their tubes when fired, but the third torpedo’s primer was very much in place — and it shot out of the tube, heading straight for Iowa.

Pandemonium erupted on Porter, whose captain hesitated to warn Iowa by radio and instead, ordered a warning to be signalled.

But in the haste and confusion, Porter sent the wrong message, signalling Iowa that the destroyer was reversing at full speed.

Iowa turned to avoid the torpedo, which exploded about 3000m to the rear of the battleship.

Next thing, all of Iowa’s guns swung around and all trained on Porter, as naval authorities thought it was an assassination attempt.

Porter was ordered to sail to Bermuda, where its entire crew was arrested.

That had never happened before in US Naval history.

Chief torpedoman Lawton Dawson admitted he had forgotten to remove the primer and was sentenced to 14 years of hard labour.

But President Roosevelt intervened, requesting Dawson’s sentence and any others given out for the incident be rescinded.

Roosevelt himself had asked his Secret Service detachment to move his wheelchair to the railing of Iowa so he could see the torpedo when he heard of its firing.

1974 and my Chinese takeaway

Porter was transferred to the Pacific after the incident with Iowa.

In late September, 1944, Porter was ordered to the western Pacific, where it escorted ships and provided shore bombardment for American troops during the liberation of Luzon in the Philippines.

The destroyer even managed to shoot down four Japanese aircraft and sink a few enemy barges.

On March 24, 1945, Porter joined the naval force for the Battle of Okinawa, where it conducted shore bombardment, anti-submarine patrols, escorted minesweepers and provided anti-aircraft support for the task force.

Then Porter’s history of horrors continued.

First it accidentally raked the destroyer USS Luce with gunfire during an air attack and then on June 10, when a Japanese dive bomber  launched a kamikaze attack on Porter as it operated off Okinawa.

Porter managed to dodge the bomber, which crashed into the water some distance to starboard.

Soon after, however, the warship changed course and ran straight over the semi-submerged kamikaze, setting off its massive load of explosives.

The blast momentarily lifted Porter out of the water and the Willie Dee slowly but surely disappeared under the waves to greet Poseidon, God of the sea.

In its final moments, it did have some luck though, as not a single crew member was killed or seriously injured in the attack.

All of them were evacuated before the hapless destroyer slipped beneath the waves, ending the career of the unluckiest, and seldom mentioned, ship in US Navy history.