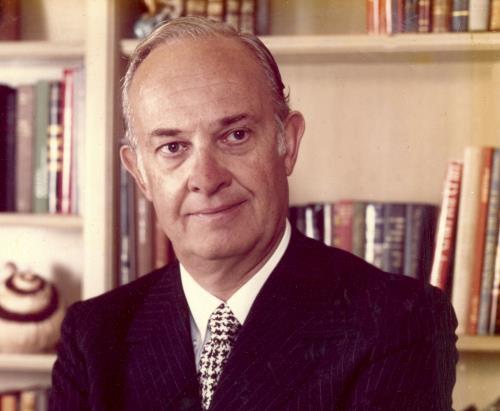 All Ford V8 fans ought to take a moment to remember Chase Morsey.

It was Chase who, in April 1949, risked his career to convince Henry Ford II not to scrap the Ford V8.

When Morsey joined Ford in 1948 as a trainee manager he was given Ford’s future product plans to review.

These plans had been approved by the Ford Board and Henry Ford II himself.

These plans called for Ford’s famous flathead V8 to be discontinued and replaced with a six cylinder motor across the Ford range, beginning in 1952.

There was no empirical evidence for this decision.

Ford’s senior executives simply had a “gut feel” that because Chevrolet used only six cylinder engines, then Ford should do the same.

Being a real car guy, Morsey thought getting rid of the V8 was a crazy idea and said so, risking his career.

He believed that the V8 was part of Ford’s DNA and offering only a six would be a sales disaster.

More to shut him up than anything else, senior management gave the young Morsey just three months to prove his claims — and that he did.

So compelling was his consumer-based, analytical and data-rich research, and subsequent presentation to Henry Ford II, that not only was the V8 reinstated, but Morsey was given a promotion and tasked with setting up a product planning department based on detailed research 0- not “gut feel”.

When Chevrolet released the Corvette in 1954, some Ford managers wanted to make a similar car.

His new department identified a much bigger and more profitable market for a luxury sporty car for which he invented the term “‘personal car”.

It became the Thunderbird.

He was instrumental in the consumer-driven development of the ‘57 Ford which was so successful it came within a couple of hundred cars of beating Chevrolet.

In 1964 he was in charge of marketing the Mustang.

Morsey left Ford and opened his own Ford dealership.

In 1970 he established his own oil company.

His book, entitled, The Man Who Saved The V8, is a must read.