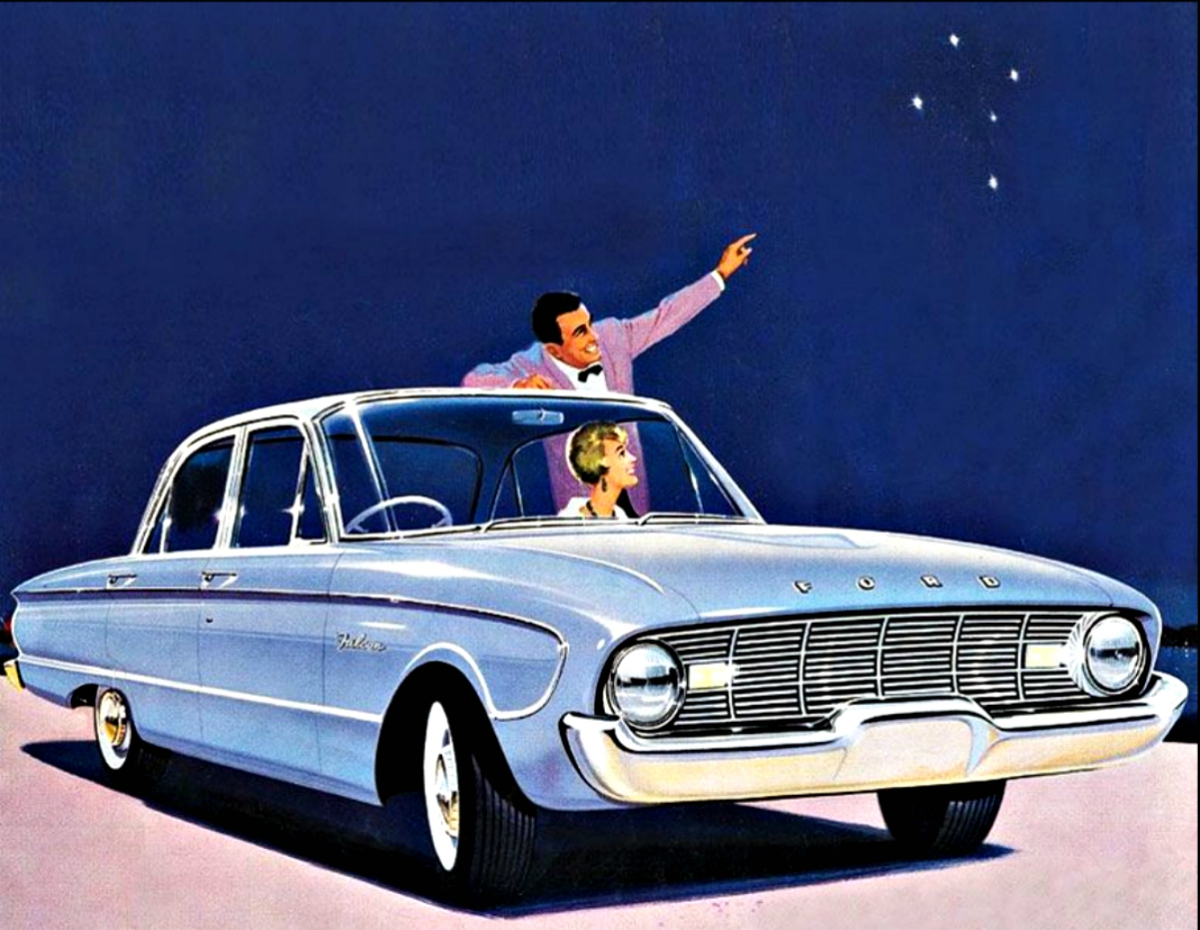 Now they could decide between the robustness of the FB Holden, with its 1955 Chevrolet look-alike shape, and the modern lines of the brand new 1960 Ford Falcon.

Suddenly, styling was a factor in the purchase decision.

What would it be?

Not only that, the Falcon boasted a bigger and more powerful engine than the Holden.

Plus, there was automatic transmission.

And, Ford’s dealers were keen to win sales with great trade-in offers.

The Falcon’s journey to Australia’s roads began in mid-1958 when a team from Ford Australia travelled to Dearborn, Michigan, to view the styling proposal for the car they hoped would challenge Holden’s dominance of the Australian car market.

Back then, Holden had 50 per cent of the car market, so there was plenty of scope for a credible competitor to win buyers and sales.

Also in the team was Brian Inglis, who would go on to become Ford Australia’s Managing Director, and be awarded a knighthood.

Smith had worked long and hard to get to this point.

In the early 1950s he’d accurately identified that cars which were built by Australians for Australians, and for our undeveloped road system, was the only way for Ford to gain market share and improve profits against the popular FJ Holden.

Smith wanted to develop a locally built “All Australian” Ford.

It needed to match Holden’s rugged appeal, and that meant a six cylinder four door sedan, and maybe a wagon.

The problem for Smith was that his major shareholder, Ford of Canada, had a different idea of what Australians ought to be driving.

Ford in America had the same view.

Clearly, they did not understand the needs of Australian car buyers. 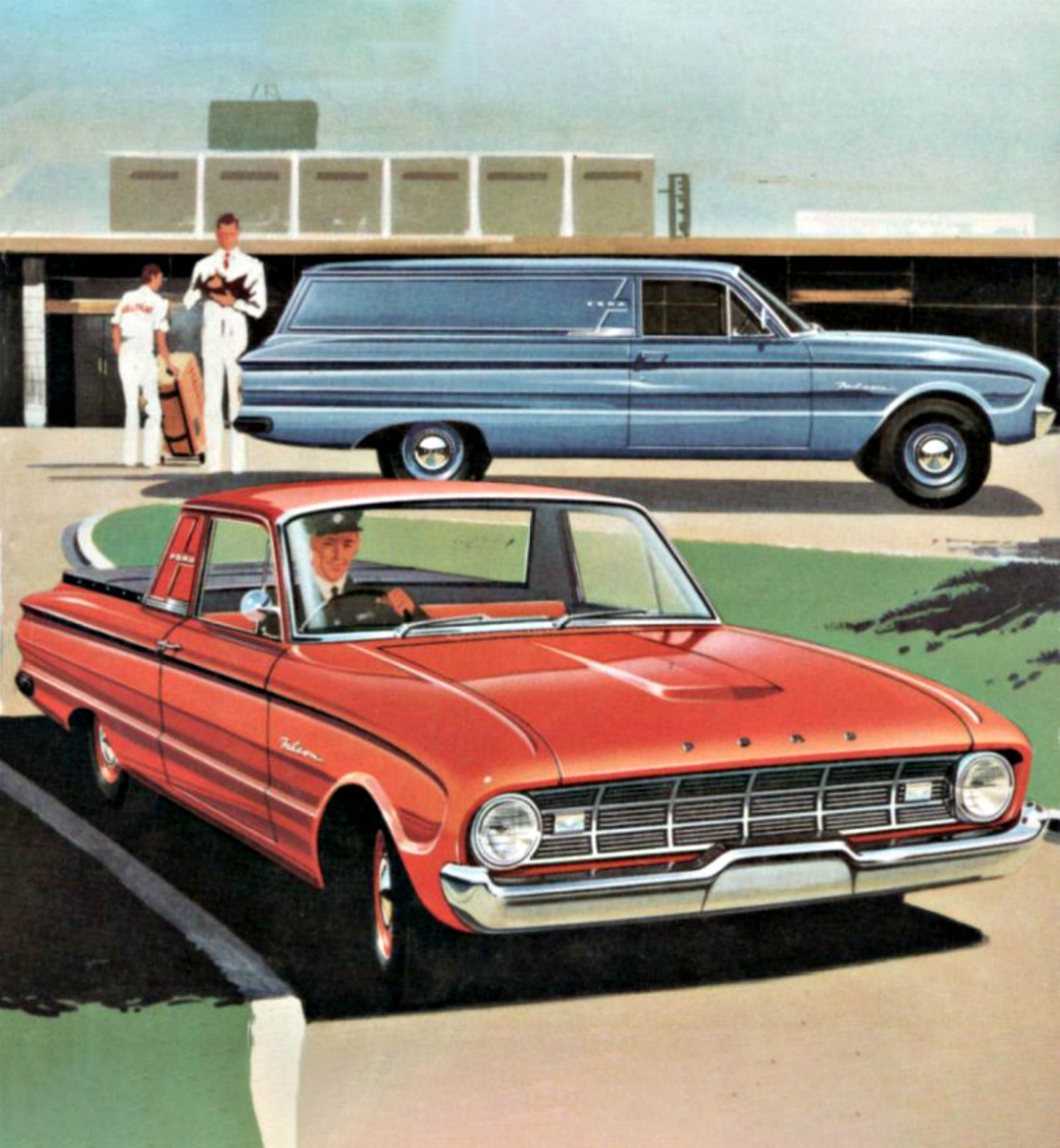 By 1955, however, Ford Australia’s market share had fallen to 10 per cent and Holden’s profits and sales were clearly increasing.

Not surprisingly the Canadians and Americans began to appreciate that Smith’s “All Australian” way had compelling merit.

Smith won approval to build a family-sized six cylinder car in a new factory in Melbourne.

But, what car would be the base for this “All Australian” effort?

The only option for Ford Australia was to develop its own version of the company’s UK-sourced and designed Zephyr MkII.

But there were two problems.

The first was that the Zephyr was a heavier car and more expensive to build than the Holden.

Second. The long range plans for the British car, which included a new V6 engine and possibly independent rear suspension and four-wheel disc brakes, would make it even more costly to build.

So, Smith and his team decided to transition the Mk II into a Mk III — just for Australia.

He asked Ford in the USA to develop a styling proposal, because Ford Australia’s rudimentary “studio” did not have the equipment nor enough qualified people to manage a car from design to driveway.

And it was the Mk III that Smith and his team were heading to Dearborn to review and approve in mid-1958.

What they saw, by all accounts, was not to their liking.

By chance, the Australians also saw another car, which had been the code named “XK Thunderbird”.

It was a compact car by American standards and about the same dimensions as the Zephyr.

In one of those legendary automotive industry moments, Smith and his team decided to ditch the Zephyr and go for the XK Thunderbird, soon to be called “Falcon”.

Work on styling the US Falcon began in November, 1957.

Its development had its genesis in research data which indicated that a growing group of Americans were buying smaller imported cars, particularly the VW Beetle.

They wanted a less expensive car or were buying their first new car and could not afford a full-sized vehicle or were affluent families who desired a smaller second car.

It was an obvious sales opportunity for Ford.

GM and Chrysler had similar data and were now also in a rush to develop small cars.

Ford’s number crunchers calculated that a  small car could make a large profit if it was cheap to build, easy to repair, priced low, lightweight, compact, functional, roomy and economic to operate.

In many ways, Ford’s senior executives saw this small car as a generic consumer item, with just enough style to be appealing.

It wasn’t exactly a throw away car, but it was not built to last for decades, either.

Most were developed in Ford’s Thunderbird studio.

The Thunderbird team applied just about every Ford design motif in one form or another to the proposals in their quest for the “right” shape.

Many of them featured complicated surface angles, tubes, fins, scallops and bulges.

While the styling was progressing, the engineers were experimenting with four and six cylinder engines while endeavouring to keep the car’s weight under the product planners’ edict of no more than 2400 pounds (1098kg).

Despite creating so many proposals, the styling team could not come up with a shape that was cheap and simple to build, nor one that appealed to Ford’s senior managers.

The convoluted curves of the prototypes would be expensive to stamp into metal and more suitable for a car that commanded a higher price, like a Thunderbird.

To inject some new ideas into the project it was decided to establish an additional design team comprising Gale Halderman and Don De La Rossa.

A temporary studio was created in the basement of Ford’s design centre.

Gale would go on to pen the first Mustang and many other Ford, Mercury and Lincoln models until his retirement in 1994.

Don retired from Ford in 1978, but was hired by long time friend Lee Iaccoca to be his Vice President of Design at Chrysler.

The simple, easy to manufacture shape which Gale and Don created had shallow concave sides which flowed around into the back end and wrapped around the tail lights.

It was quickly selected as the basis for the production design.

It was at this point that Charles Smith and his Ford Australia team saw the XK Thunderbird.

The car was a big hit with Americans who bought a massive 456,703 in the first model year.

Meanwhile, in Australia, the American sedan was being localised.

Several station wagons were also shipped across the Pacific for testing.

The wagon was 8 inches (203mm) longer than the sedan, all of it behind the back wheels.

The additional length caused the rear end to scrape on driveways and gutters during testing.

A decision was made to shorten the wagon to the same length as the sedan for Australia.

This work was done locally.

The Australian team had some misgivings about the Falcon’s durability when they signed up to the deal, but the Americans assured them that they were doing plenty of testing.

Wrong, it turned out. 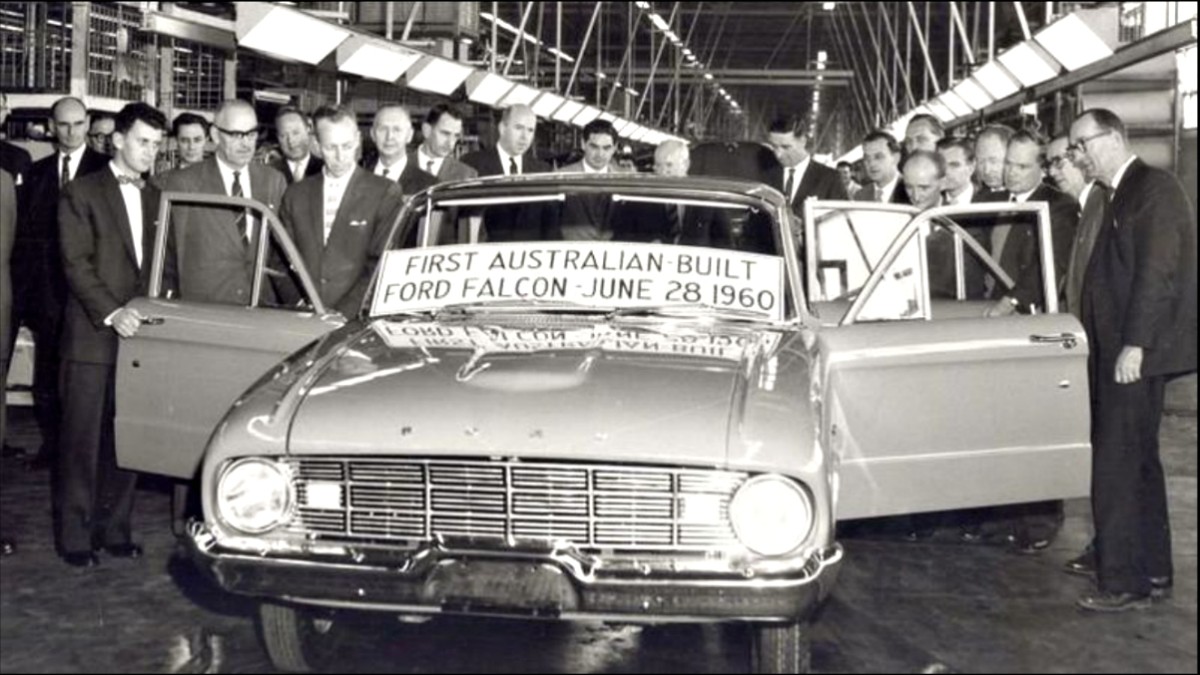 Launched in a blaze of expensive advertising that stressed the car was “Australian — With a World of Difference” the Falcon went on sale in September, 1960.

The impact of the car was immediate and, surprisingly, caught Holden somewhat off guard.

Compared to the FB Holden the Ford offered a bigger, more powerful motor, an automatic transmission, which Holden did not have, and was five inches (120mm) lower and 200 pounds (90kg) lighter.

A big glass area ensured that the interior was bright and airy.

The Deluxe model came with chrome door surrounds, a white steering wheel, arm rests on all doors and the woven fabric seat upholstery, which added a touch of elegance — was not available in the FB.

In every way the Falcon looked a winner. Every way except one, as it turned out: front suspension durability.

It is not surprising there were issues.

The car was, after all, built to a price.

Costs were saved right across the car during its development.

It was not expected to be durable in the country which invented planned obsolesce.

It was expected to be cheap, used for few years, and traded in on something newer.

Having taken the Americans at their word that suitable testing had been carried out, the reality was quick to hit home for the local management team.

Their faith had been misplaced.

Word of the problems got around.

The problems were eventually fixed, but the damage to Ford’s reputation was irrepairable.

It took until 1965 for Ford to regain customer confidence, and it was the late Sixties before the company was really able to make significant inroads into Holden’s market dominance.

The American Falcon has multiple legacies.

It attained the highest sales of any new model in its first year, until the Mustang arrived, which was really a Falcon in disguise.

It also formed the base of the 1961 Mercury Comet and mid-sized Ford Fairlane.

In 1969 the platform was donated to the Maverick, which bested the 1960 Falcon’s first year sales.

In short, McNamara’s simple car made Ford hundreds of millions of dollars profit.

From an Australian perspective the Falcon gave family sedan buyers their first experience of choice.

It was not a complicated choice — Holden’s dependability versus Falcon’s modernity — but choice none the less.

As happened in the USA, the basic underpinnings of the XK Falcon remained in place for many years.

The XK Falcon set Ford Australia on a long trajectory that saw it finally claim market leadership in 1982.