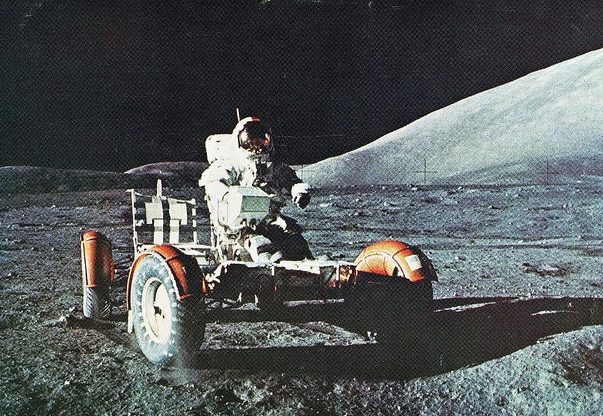 Not long ago someone paid a staggering US $35 million for a 1962 Ferrari 250 GTO made for racing driver Stirling Moss.

The distinctive apple-green Ferrari was one of just 39 GTOs produced from 1962 to 1964.

That’s a lot of folding money for just one car, but even so it’s not the most expensive car ever built — not by a long shot.

That title goes to the Lunar Roving Vehicle built for the Apollo Space Program by the Boeing aircraft company in 1971.

Back then Boeing quoted $19 million for the Rover, better known to Baby Boomers as the Moon Buggy.

But, because of cost overruns, the final figure was closer to $38 million – remember that’s in 1970s money.

One of the companies that tendered unsuccessfully for the project was Chrysler (imagine if the Moon Buggy had been a Jeep).

As it was GM supplied the wheels, motors and suspension.

Power was provided by two 36-volt, silver-zinc potassium hydroxide, non-rechargeable batteries with a capacity of 121 Ah.

The buggy could carry two astronauts and their payload a maximum distance of 92km, although the range was never put to the test.

NASA was worried it might break down and the astronauts would be forced to return to the Command module on foot.

The buggy had a top speed of 13km/h, although Apollo 17’s Eugene Cernan recorded a maximum speed of 18 km/h, which makes him the unofficial holder of the lunar land-speed record.

Cernan was the last man to walk on the Moon.

It was constructed around an aluminium space frame (LOL), weighed 210kg and could carry a 490kg payload – but weighed just 35 kilos on the Moon’s surface because of its lower gravitational force.

Hyper ride will take your breath away

The wheels had a spun aluminium hub and a diameter of 81.8cm, with 23cm wide tyre made of zinc-coated, woven 0.083cm diameter steel strands attached to the rim and discs of formed aluminium.

The Lunar Roving Vehicle was used for the first time on July 31, 1971 as part of the Apollo 15 mission.

It was left-hand drive and driven by mission commander, David Scott, although the T-shaped control stick was actually located between the seats.

The two folding ‘deck chairs’ the astronauts sat on were made of aluminium and nylon webbing and fitted with Velcro seatbelts to stop the astronauts from bouncing out.

Four buggies were constructed in total and three of them remain abandoned on the Moon, all with very low kilometres for the collectors out there.