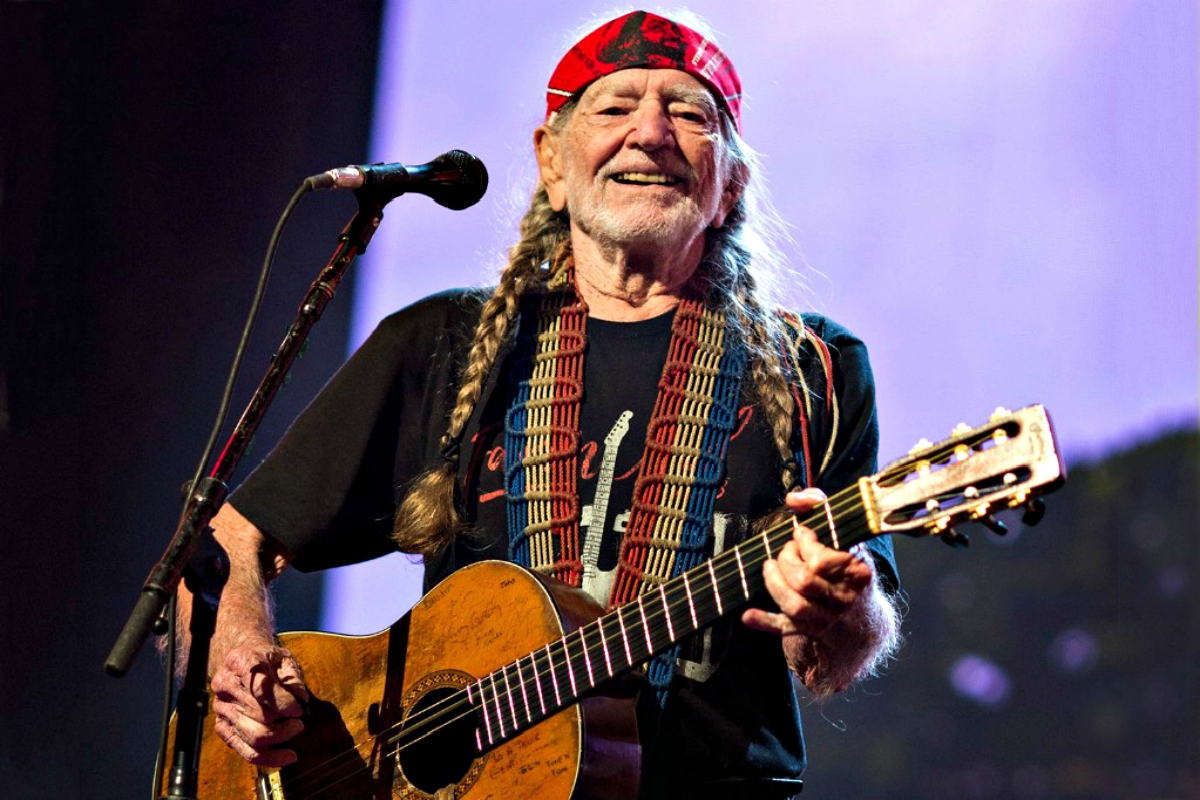 Home
Listen up
I like ol’ Willie a lot more now

I’VE always liked Willie Nelson though I didn’t know much about the now 87-year-old country and western singer other than that he was fond of enjoying a beer or six between songs and that he once did a unique deal with the US revenue people to settle his huge tax bill.

I never knew he was also known as Shotgun Willie and as Booger Red, or that he had nine books to his name, or that he smoked a joint on the roof of the White House and sundry other escapades one wouldn’t ordinarily expect of a recording star.

But Minneapolis writer Donn Saylor had long interviews with the legendary Nelson and many of his mates, and unearthed some fascinating details:

Singer, songwriter, actor, activist. Though he is seemingly a jack of all trades, all of the insane Willie Nelson stories out there illustrate something else about this one-of-a-kind performer: the guy is an undisputed legend.

From run-ins with the law and the Internal Revenue Service to pulling off amazing feats of survival and heroism, from his well-known love of ganja (cannabis) to his alleged sexual proclivities, there is no end to the crazy but true Willie Nelson stories in circulation.

He wrote his first song at the tender age of seven, and by the time he was 10, he was in a band.

His love of music took him to Nashville, where he became an in-demand songwriter. But Willie’s plaintive voice and virtuoso guitar-playing, coupled with his powerful original songs, soon made him a superstar in his own right.

As of 2018, he has recorded 72 studio albums, starred in dozens of movies, and authored or co-authored nine books.

Over the years, he’s been involved in various crashes, collisions, and wrecks, so much so that friend Larry Trader observed: “How he keeps coming out of all these wrecks is a wonder to behold.”

In one of the more serious incidents, a small plane Willie was on crashed during landing in a rural Texas field. Fearing the worst, rescue crews and the media arrived. “And here comes Willie and his pilot, limping up the road,” Trader said.

When the media asked about the crash, Willie’s response was . . . well, pure Willie: “Why, this was a perfect landing. I walked away from it, didn’t I?” he said.

Nelson was once sued by a former girlfriend for a jaw-dropping $50 million.

The woman alleged that Willie had promised to marry her, then reneged on the promise. It was a breach of contract case, but it didn’t get far. Changing your mind, it seems, isn’t worth a $50 million payout.

And it’s not like Nelson is hesitant about marriage: he’s walked down the aisle four times and fathered seven children.

This crazy story comes from the lawsuit filed by his former girlfriend who sued Nelson for $50 million after he reportedly refused to marry her.

She alleged that Nelson enjoyed marathon sex sessions, and the two once had intercourse for a mind-boggling nine hours.

Oh, but wait; it gets better. Apparently, when that nine-hour bacchanal was at last consummated, Nelson did a somersault . . . with his girlfriend still attached. His friend Kinky Friedman recalled Nelson telling the story:

“‘I’m not saying it didn’t happen,’ Willie says. ‘It might’ve happened. But you would’ve thought I’d remember at least the first four or five hours.’

‘What will you do,’ I ask him, ‘if the case actually comes to court?’

Willie thinks for a moment, then smiles. ‘My ex-wife Shirley said she’d be glad to testify on my behalf,’ he says.”

In 1990, the IRS discovered Nelson had neglected to pay his taxes. This was no minor accounting error; this was a major disregard for the nation’s tax laws.

As a result, the Government concluded that Nelson had failed to pay an astonishing $16.7 million in taxes, one of the largest individual tax bills ever accumulated at the time.

His attorney eventually got that number down significantly, but Nelson was still stuck with a massive debt. The IRS seized his assets, and he released an album of demos and recording outtakes to offset the rest of the costs.

The name of that album? Who’ll Buy My Memories? The IRS Tapes.

There are different levels of badassery, and this one just might take the highest (no pun intended) honours.

Sources confirm that while he was a guest staying in Jimmy Carter’s White House, Nelson smoked a joint on the roof.

What’s more is that his smoking companion was none other than Chip Carter, the president’s middle son. In typical Willie style, Nelson is nonchalant about the whole thing: “We were there, and there it was, and why not, you know? And they have a great view from the roof,” he said.

As any father would be, Nelson was enraged when he learned his daughter Lana was being abused by her husband. So he took matters into his own hands. He later recounted the events:

“I ran for my truck and drove to the place where Steve and Lana lived and slapped Steve around. He really pissed me off. I told him if he ever laid a hand on Lana again, I would come back and drown his a**.

“No sooner did I get back [home] than here came Steve in his car, shooting at the house with a .22 rifle. I was standing in the door of the barn and a bullet tore up the wood two feet from my head. I grabbed an M-1 rifle and shot at Steve’s car. Steve made one pass and took off.”

From that day forward, Nelson was known as Shotgun Willie.

In the late 1970s, Nelson’s road crew was loading up the tour bus after a show in Birmingham, Alabama, when they got caught up in a gunfight in the parking garage.

Nelson, who was on the bus, dived right into the chaos . . . and promptly ended it.

“And here comes Willie. He walks off the bus wearing cutoffs and tennis shoes, and he’s got two huge Colt .45 revolvers stuck in his waist.

“The barrels are so long they stick out the bottom of his cutoffs. Two shining motherf*cking pistols in plain sight of a bunch of cops nervous as sh*t.

“Willie just walks over and says, ‘What’s the trouble?’ Well he’s got some kind of aura to him that just cools everything out. The cops put up their guns, the people climb off the concrete, and pretty soon Willie is signing autographs.”

In the mid-1970s, Taos, New Mexico, was a creative haven for rebellious young actors and country music outlaws. In other words, it was the perfect environment for Willie Nelson and actor Dennis Hopper.

During one escapade, Hopper downed a whole sheet of acid and started shooting up the Taos town plaza. He was arrested, but Willie bailed him out of jail.

“I freaked out,” Hopper recalled:

“Come on, man, who do you think you’re kidding? You’re gonna lure me out and yell jailbreak and blow my a** away! But I thought, ‘Hey, be cool, you are after all hallucinating all this.’

“So I walked out of jail and got into Willie’s Mercedes with him and his wife Connie and his golf pro Larry Trader. We drove across the desert towards Las Vegas.”

Free beer? Pull the other one!

Luck, Texas, was originally built as a set for Nelson’s 1986 movie, Red Headed Stranger, but after filming, Nelson decided to make it his own.

It’s located outside of Austin, across the street from Nelson’s personal golf course. Much of Luck was damaged in a brutal 2014 storm, but Nelson vowed to rebuild.

“Our beautiful Luck wasn’t so lucky recently,” he wrote on Facebook about his ravaged home:

“Last week’s tornado force winds ripped several buildings apart, including the bank, the post office, and left World Headquarters holding on by a splinter. We are happy to report no one was hurt and the church only had a few windows blown out.

“Some towns got it a lot worse, so we aren’t complaining.”

On the eve of his 81st birthday, Nelson added yet another accomplishment to a life already brimming with successes.

He became a fifth-degree blackbelt in GongKwon Yusul, a Korean martial art that Nelson has diligently studied and practised since the 1990s.

“It’s just good for you physically. For your lungs. The more you’re breathing, exercising, the better you’re going to feel,” he said.

File this one under: Gross but Fascinating:

Nelson’s first public performance was not singing a song, but reciting a poem.

He was so nervous during the performance that he frantically started picking his nose. He picked it so hard, in fact, that he drew blood.

“I hold my nose with one finger and while blood runs all over my little white sailor suit I recite my poem,” Nelson said in one of his memoirs.

That’s where his childhood nickname — Booger Red — came from.

Willie Nelson may primarily be known today as a singer, a weed enthusiast, and an all-around character, but let’s not forget that he is an extremely accomplished songwriter with some huge hits under his belt.

And some of his songwriting hits haven’t even been his own recordings, but songs other artists have recorded.

One of his biggest successes was “Crazy,” a song forever associated with Patsy Cline.

“We went over to [Patsy’s] house and had a couple of beers,” Nelson remembered.