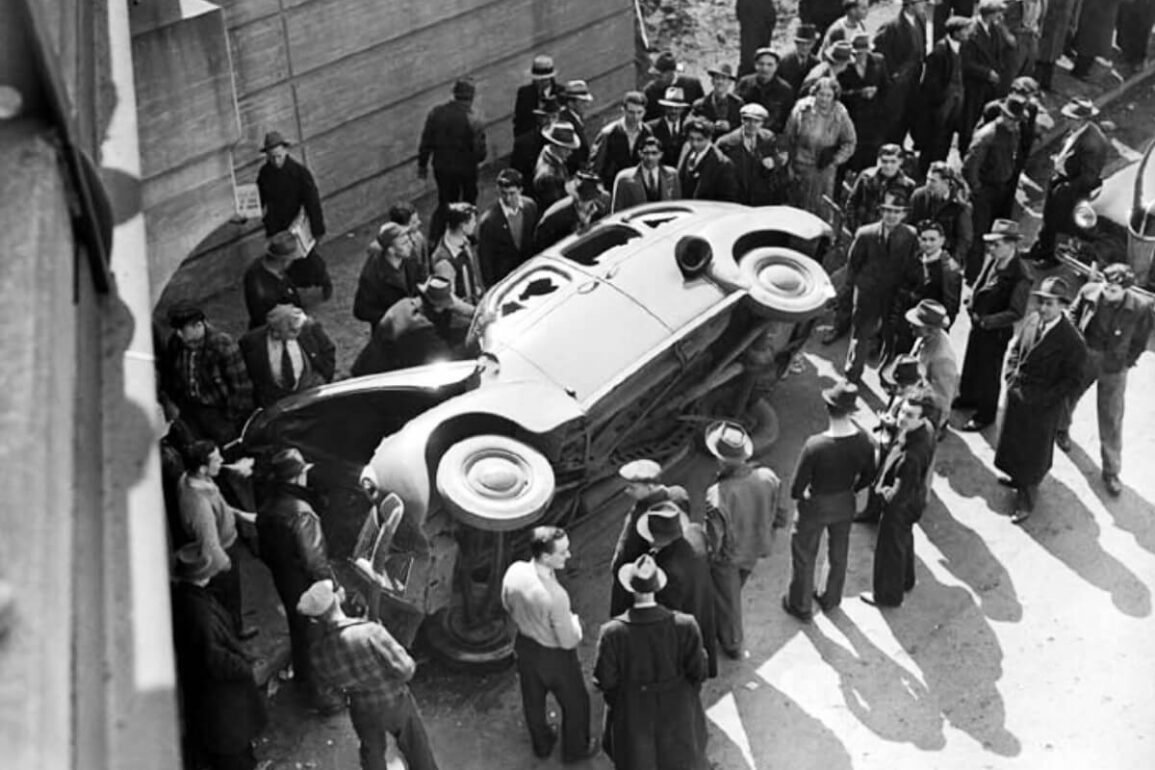 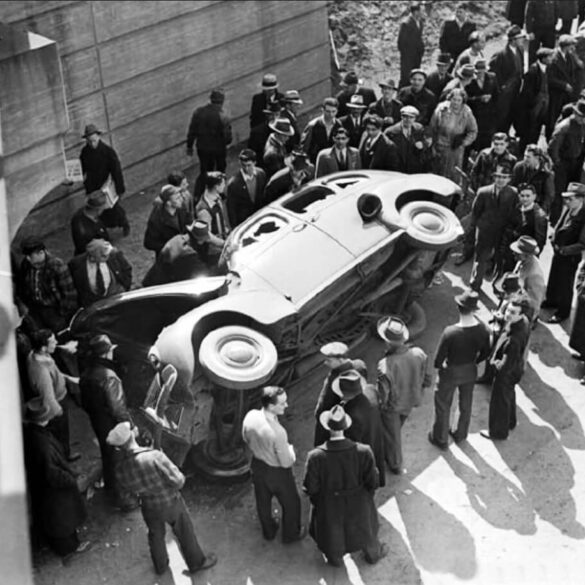 IMAGINE a car company employing a small army of thugs to deal with any union demands that might threaten production.

Henry Ford was in the business of making cars and didn’t take kindly to production problems posed by unhappy unionists — or anyone else.

Henry was in a New York hotel room one day in 1916 when he met Harry Bennett.

What followed in the ensuing years is the stuff of a Ripley’s Believe it or Not.

Harry was a compact figure, quite short, with hard blue eyes, receding brown hair and a bulldog jaw.

Bennett was from Ann Arbor, Michigan, not far from where Henry lived.

The 24-year-old was just out of the US Navy, where he had served as a deep-sea diver and had boxed under the name “Sailor Reese”.

Henry took a liking to Bennett, whose fearless and picaresque past made him just what he needed.

The men at the River Rouge plant were “a pretty tough lot,” Henry said. “I haven’t got any policemen out there.

“There may be a lot of people over there who want to fire you,” he told Bennett, “but don’t pay any attention to them. I’m the only one who can fire you. Remember, you’re working for me.”

Each morning Bennett dressed in a suit, his trademark bow tie, a fedora, and a holster in which he packed a handgun at all times.

He picked up Henry at his Fair Lane estate and took him to work.

Whatever Henry needed done, Bennett was his Man Friday.

The fact that he couldn’t change a car’s engine oil stirred confusion among the ranks. Asked what his job was, Bennett answered: “I am Mr Ford’s personal man.”

He was dedicated to his boss (he never called him Henry) and once said: “If Mr Ford told me to blacken out the sun tomorrow, I might have trouble fixing it.

“But you’d see a hundred thousand sons-of-bitches coming through the Rouge gates in the morning, all wearing dark glasses.”

In the 1920s, Bennett began to amass a private security force called the Service Department — a group of ex-boxers and ballplayers, cons, bad police officers kicked off the force and characters from Detroit’s Mafia, which during Prohibition ran a thriving booze trade, smuggling liquor over the Detroit River from Canada.

“They’re a lot of tough bastards,” Bennett said. “But every one of them is a goddamn gentleman.”

Henry’s son, Edsel, initially regarded Bennett as a curiosity, but the more he learnt about Harry Bennett, the more he realised the kind of things of which the little guy in the basement was capable.

Once, when a hoodlum threatened Edsel’s son, Henry II, Bennett said he would handle it.

Soon after, the guy was found floating face-down in the river.

Bennett was very much involved in the 1932 riot that started off as ‘the hunger march’ but was later known as ‘the Ford massacre.’

It was at the height of the Great Depression and thousands of people were unemployed.

Then the Detroit Unemployed Council and the Auto, Aircraft and Vehicle Workers of America called for a march from Detroit to Dearborn to the Ford River Rouge Complex, the company’s largest factory.

About 4000 people turned up, many of them members of the Communist Party which had strong links with the labour movement.

They defied a Dearborn Police order to disperse as they approached the car plant and the police used tear gas to halt their progress.

Police and Ford feared the mob was aiming to take over the car plant.

When the tear gas didn’t stop them, two fire engines arrived and sprayed the crowd with cold water on an already freezing day.

Then one of the demonstrators fired a gun, and the crowd  began throwing stones at the police, who were soon supported by Ford’s Service Department.

Harry Bennett drove up, was immediately recognised and pelted with stones. Although injured, he retaliated by getting out and firing at the mob. Police and his security men joined in.

Five people were killed, about 25 more wounded and Bennett and 25 police officers were injured.

Those killed were all members of the Communist Party.

Bennett and a few others were charged, but a grand jury ‘found no legal grounds’ for indictments.

‘However, we find that the conduct of the demonstrators was ill-considered and unlawful in their utter disregard for constituted authority.’

And that was that.

The economy later improved and all was well until 1937, when United Auto Workers president Walter Reuther and dozens of other union organisers and sympathisers gathered on a bridge overlooking the River Rouge plant to demand better pay for the workers.

From the opposite side came Harry and about 40 his Service Department lads and beat the tripe out of demonstrators.

That incident was known as the Battle of the Overpass, but Henry Ford finally recognised the union four years later.

Bennett, meanwhile, was housed on a vast Ford-owned plot of wooded land overlooking the Huron River.

According to Ford historian David L. Lewis, Ford and Bennett designed the home  “with the enthusiasm of boys building a robber lair or pirate’s nest.”

Bennett, after all, was not loved by everyone.

Features included bomb-proof underground tunnels, including one that led to a boathouse for speedy getaways on the river, stairs of uneven length and width, so they’d promote falls and injury among the unwary, should Bennett be chased down them.

Upon descending, visitors found dens housing lions and tigers that were allowed to roam free on occasion.

The place was known as Bennett’s Castle.

I could not find any images of the big cats, but many reports indicate they really did exist.

They included lions, tigers, panthers, and other large cats. At his various homes he had special pens or in some cases complete buildings for the housing of the animals.

Bennett would let them roam the grounds at night and would turn a couple loose in the various tunnels under his house as an added measure of security.

Bennett clearly enjoyed his big cats and sometimes made gifts of them to close friends.

During the 1970s and 1980s, a woman known as Catherine Stark lived in the former Bennett castle, which the Ford family sold to her paternal grandfather in 1948.

She remembers “amazingly large bedrooms, and a little village of replicas of famous buildings, like the Capitol in Washington” on the property, and a theatre house where Bennett and his friends might engage in amusements.

“Every room,” she recalls, had “at least two, if not three ways to get out.”

An enormous pink stone fireplace and an elaborately tiled fountain stand out in her memory, as do secret hideouts that only those in the know could access.

Sliding bookcases and nondescript panels, for instance, allowed entry to clandestine chambers, including more gun repositories and a Roman bath.

Like many a prosperous Michigander, Bennett enjoyed weekends and summer holidays at a lodge on a lake.

Built with Ford’s money and supplies, Bennett’s lodge was spectacular, situated on 965ha on Lost Lake in remote central Michigan.

Looking from a distance like a log cabin, it doubled as a battle station, constructed from concrete sculpted to look like logs and ringed with a moat.

Submerged giant metal spikes offered extra protection against uninvited guests, and the bridge crossing the moat was filled with dynamite that could be detonated remotely.

At the end of a hidden stairway, a bunker below the basement sported inordinately thick concrete in anticipation of the worst.

Meanwhile, an underground window to a swimming pool enabled Bennett and his cronies to furtively admire from their barstools the girls they’d bussed in for a swim.

The property was bought by the Boy Scouts in 1964 and operated by the organisation until 2012.

It has since fallen into disrepair, but is still a tourist attraction.

Visitors report that many creepy details remain, including secret passageways, and, once again, stairs with different widths, pitches, and risers to foil unfamiliar users.

Bennett also had a private airfield with an airplane at the other end of Lost Lake.

In the event of an attack, he could take the secret passageway, emerge by the dock, take a boat across the lake, and escape by aircraft. The attack never came.

Edsel Ford died in 1943, having been unable to dislodge Bennett from his father’s affection.

But in one of his first official acts after taking the reins from old Henry, Edsel’s son, Henry Ford II, fired Bennett, who left the castle and lodge, never to return.

That was in 1945. Without him, the notorious Service Department probably folded soon after, or became staffed by folk with mechanical aptitude, rather than muscle.

His taste for hyper security lived on when he relocated to the Ford-underwritten S-Star Ranch, built for him in 1940 in Desert Hot Springs, California.

There, Bennett indulged his taste for all things cowboy and developed a proclivity for painting Western scenes in oils.

S-Star Ranch had no secret tunnels, but armed security and a commanding elevated location above the surrounding desert allowed this complicated character to breathe freely.

After he sold off his Michigan properties and moved to Desert Hot Springs, he kept regular pussycats.

It’s safe to say Harry Bennett was many things, but he was a lover of animals.

The last six years of his life were spent in declining health.

In 1973, Bennett suffered a major stroke. Two years later he entered the Beverly Manor Nursing Home in Los Gatos, California, where on January 4, 1979, he died.

His death went unreported for a week and the cause of death was not released.

His net worth was estimated at $15 million US dollars.

The Ford Motor Company, founded in 1903, remains one of the world’s biggest.

But of all the tens of thousands of people who worked there, none was more famous, feared, respected or notorious, as Harry Bennett.