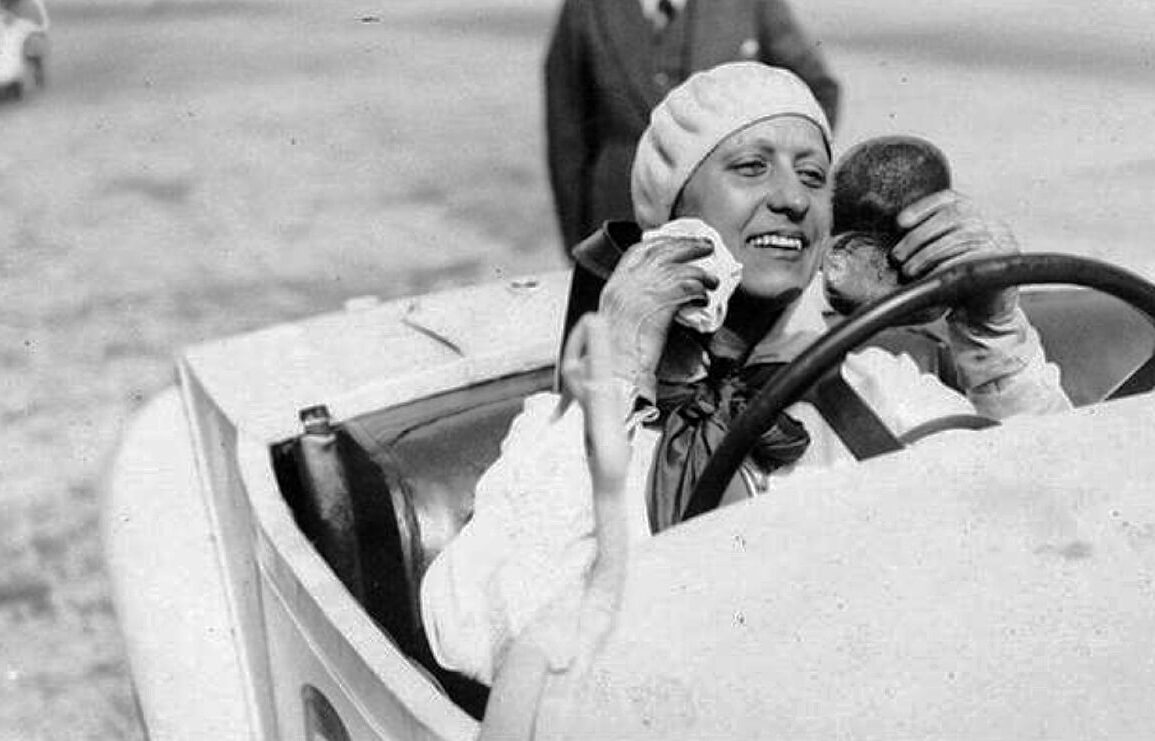 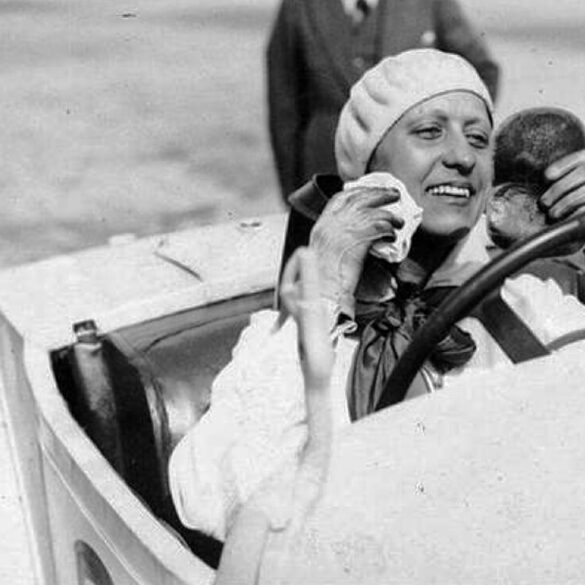 HOW desperate does one have to be to steal a cat’s bowl of milk?

That sad, but painfully true era was part of the riches to rags life of Helene Delangle, a beautiful and multi-talented French lady who once was among the most popular personalities of her time.

Except that nobody knew much of Miss Delangle because she had changed her name to Helle Nice.

She became a socialite — and one of the world’s most successful racing drivers — and everyone in Europe and many other parts of the world held her in high esteem.

She was born on December 15, 1900, at Aunay-sous-Auneau, a village in northern France, where her dad was the postmaster.

She was the youngest of five children, but her three brothers died while still in their teens and her sister, Solange, was intensely jealous of her, because Helene was one of those rare smarties who excelled at everything she did.

She could sing, became fluent in English and Italian, was a good artist, a whiz at geography and history — and she had a dazzling smile to enhance her physical attractions.

In 1916, she went to Paris where she initially found work as a nude model for artist René Carrère.

He encouraged the young woman to take up ballet and she became very successful, first dancing under the name Hélène Nice, which she later changed to Hellé Nice.

The attractive lass had a wonderful sense of showmanship and a zest for life and adventure.

She also enjoyed herself, making the most of her young life.

Before long she was the paramour of some of the richest and most powerful men of her time.

Famously she had an affair with Philippe de Rothschild, but she wasn’t just attracted to the aristocratic and wealthy — even though she began to move in society circles.

As her wealth and fame grew, so did her assets and she was able to afford both a home and a yacht.

One of her lovers was the racing driver Henri de Courcelles, who introduced her to Europe’s great racing venues just as grand prix racing was sweeping across Europe.

In 1921, Helle tried to enter a race at Brooklands in England, but her entry was rejected.

Why? Because she was a woman.

She was furious and turned to skiing to fuel her need for high-speed excitement.

But a knee injury she sustained while trying to outrun an avalanche put an end to her career as a dancer.

Next, she turned to racing.

She trained for and won the first Women’s Grand Prix held in June 1929, piloting an Omega 6 that was given to her by the manufacturer, Jules Daubecq.

He figured that pictures of a glamorous female champion in one of his vehicles would help sell his cars.

This grand prix was part of a weekend of female-only races held at Montlhéry, the first purpose-built racetrack in France.

“The driving was magnificent: nobody who saw it would feel able to argue that women drive less well than men,” the L’Intransigeant newspaper reported.

The French press dubbed her La Reine de Vitesse — the Queen of Speed.

The next day Helle got a telegram from Bugatti asking her to drive for the factory.

She immediately accepted the offer and won the Actors Championship in a Bugatti, succeeding in a major tournament in which men competed, too.

In addition to the victories, she signed with Lucky Strike, the “cigarette of the championship winner,” and thousands of posters appeared featuring her visage.

Within a few months, she became one of the most famous people in France.

In 1930, she went to the United States to race supercharged Miller cars on dirt tracks.

At first, she was a salaried exhibition driver, preferring to get behind the wheel without wearing a helmet because, she said, “the crowds always like to see my hair when I am driving.”

She signed another lucrative advertising deal —this time with Esso — and was crowned “the Bugatti Queen” by the press.

Rich and now famous worldwide, Nice returned to Europe, determined to make her mark as a grand prix driver.

Her desire was rewarded in the season’s first grand prix, when she placed fourth racing against the sport’s best drivers, including Philippe Étancelin, René Dreyfus and Louis Chiron.

She competed on circuits across France and Italy, earning the equivalent of $100,000 in today’s dollars as an entry fee for each race.

In addition to racing fast cars throughout her career, Helle lived fast, too.

As her renown increased, she found no shortage of lovers.

Some of her affairs were brief; others were longer and included, beyond the wealthy and powerful, members of the European nobility and other personalities such as Jean Bugatti and Count Bruno d’Harcourt.

Despite her many successes, she never took first place in men’s races driving her Bugatti.

While often the focus of attention wherever she raced, she was not the top female driver of the day; that honour went to Elizabeth Junek, who also raced for Bugatti.

Regardless, Nice was without question a talented driver of cars that were dangerous and difficult to drive, regardless of who was at the wheel.

On September 10, 1933, then piloting an Alfa Romeo, Helle drove in one of the deadliest races in history.

In 1936, she travelled to Brazil to compete in two grands prix.

During the São Paulo Grand Prix, she was sitting in third place behind Brazilian champion Manuel de Teffé when a freak accident almost took her life.

On  the final lap De Teffe was in second place, but Helle was catching him quickly and was in the process of overtaking, with the finish line just 25m away.

Somehow a hay bale was pushed on to the track, right in her path.

Her Alfa hit it and veered violently to the left — and into the crowd.

With only two wheels on the bitumen, her car spun down the straight, came back down on its wheels and began to somersault down the track’s edge.

Helle was thrown out of the cockpit, straight on to one of the soldiers providing crowd control for the race.

He bore the full impact of her body, saving her life.

However, the impact killed the soldier and, because Helle lay unconscious, she too was thought to be dead.

Her car came to a stop in front of the main grandstand.

Taken to the hospital, Helle was comatose for three days before regaining consciousness; two months later, she was discharged from the hospital.

Three other soldiers also died, as did two civilians.

The six fatalities and over 30 people injured made the incident still the deadliest in the history of Brazilian motorsport.

No-one blamed her for the tragedy. On the contrary, the strength she had shown in surviving her injuries made her even more popular with the people of Brazil.

Mustang cooked up at kitchen table

In 1937, she attempted a comeback, hoping to drive in the Mille Miglia and the Tripoli Grand Prix, both of which offered substantial purses.

Unable to find backers, she instead entered endurance trials for female drivers, sponsored by the Yacco oil company.

Nice teamed up with three other women at Montlhéry and alternated stints behind the wheel.

Together, the women drove for 10 days and nights straight, breaking 10 world records over distances and time spans ranging from 12,500 miles to 10 days.

Still she was unable to secure financial backing.

Over the next two years, she drove in rallies and held out hope to be signed once more with the Bugatti team.

But then came the double blow: Jean Bugatti, the son of company founder, Ettore, was killed on August 11, 1939, while testing a Type 57 tank-bodied racer.

Three weeks later, Germany invaded Poland, and the world was once more at war.

France fell in June 1940; in 1943, Helle moved to the French Riviera and set up with Arnaldo Binelli, her lover and mechanic, in a sprawling estate overlooking the city of Nice.

It was there that the pair spent the duration of the war.

She was still wealthy but the war years cut into her savings enormously.

Then her career hit a low in 1949 when she entered the Monte Carlo Rally with co-driver Annie Itier.

At a pre-rally reception the famous Louis Chiron approached her and shouted that she should be banned, claiming she was a traitorous tart who had been an agent for the Gestapo during the war.

His tirade was heard by fellow drivers, local dignitaries, celebrities and sponsors — and Helle’s once-bright star took a big tumble.

Fact is, another French femme racer of the time, Violette Morris, was indeed a very active Gestapo agent, recruited to the Nazi cause by German racing fraulein Gertrude Hanneker, who almost certainly would also have met Helle at some stage — since all drivers inevitably meet each other during the course of a racing season.

There was some doubt, especially when Helle failed to fight back, and her family disowned her.

More bad luck was that dear Arnaldo had started to look for pastures new.

Helle had been useful to him when she’d been rich, but her wealth had dwindled.

He told her that he wanted to go into business and needed to borrow funds.

She gave him what was left of her savings and surprise, surprise, he simply ran off with her money.

Helle was left alone and penniless, a stark and bitter contrast to her once flourishing career.

Destitute and abandoned by her friends and family, she was forced to rely on meagre handouts from an actors’ charity — the very charity she had helped to fund during the halcyon days of her youth as a showgirl.

At age 75, the once great racing driver was reduced to moving into an attic in a run-down part of Nice.

Her neighbours said they recalled seeing her “taking the milk out of cats’ saucers because she had nothing to eat or drink.”

Tragically, her family refused to add her name to their memorial stone and she was buried in an unmarked grave.

A foundation was eventually established to establish a memorial plaque at her gravesite to restore her reputation as one of the greatest drivers in history.