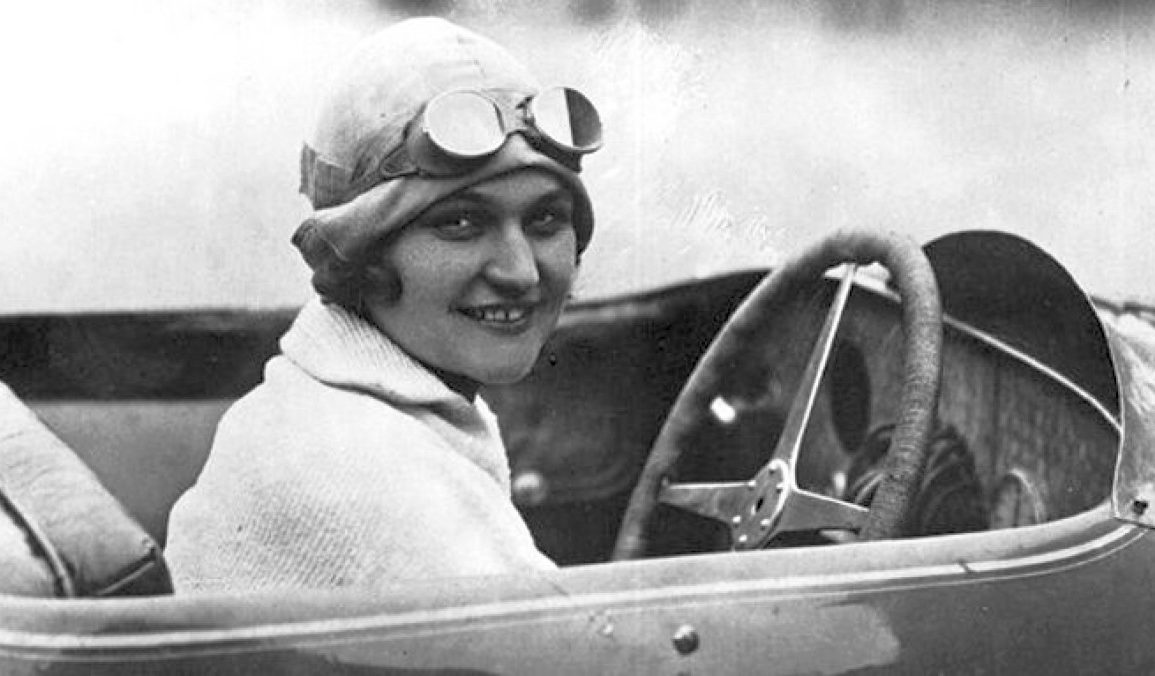 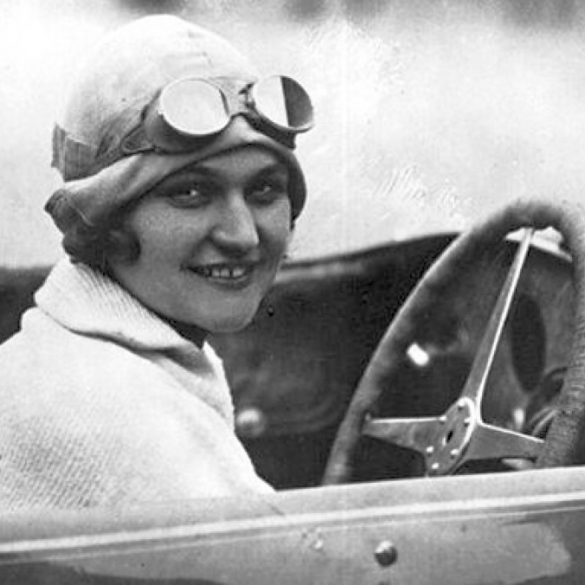 MORAVIA is no longer on any map and few people in Australia and many other parts of the world, have ever heard of it, usually confusing it with Monrovia — the capital of Liberia.

Moravia, with its tumultuous history of some 600,000 years, became part of what is now the Czech Republic, back in 1918.

The Morava River runs through the historic region’s second biggest city, Olomouc, and there must have been something special in the water, since that’s where, in 1900, Alžběta Pospíšilová was born.

Later known as Eliška (Elisabeth) Junek, the diminutive lass soon became known as ‘Queen of the Steering Wheel’ and is today still regarded — by folk with long memories — as one of the greatest female drivers in Grand Prix history.

The sixth of eight children, she took a job at a bank when she was 16, where she met a young banker by the name of Vincenc ‘Čeněk’ Junek.

He was six years older and the two soon began a courtship.

Elisabeth’s work with the bank took her first to Brno, then Prague, and then to France and Gibraltar.

She later returned to Prague to be reunited with Čeněk, who had become fairly affluent and was able to indulge his enthusiasm for motorsport.

She remarked: “If he is going to be the love of my life, then I’d better learn to love these damned engines.”

Elisabeth soon fell under the spell of sports cars of the period, especially Bugattis, and, in 1922, took secret driving lessons to earn her licence.

He won the Zbraslav-Jíloviště hillclimb in 1922, the year they married.

Elisabeth then changed her first name from Alžběta to Eliška (Beth) and her surname to Junková, the feminine form of Junek in Czech.

In October 1922, the couple bought a Bugatti Type 29/30GP that had previously been raced in the French Grand Prix; the Type 29/30GP was the first Bugatti with a straight-eight engine.

Initially she served as riding mechanic to her husband, but a hand injury suffered during WWI affected his ability to shift gears, so she got the chance to take the wheel in his place.

Her first professional race was in 1923, with Čeněk at her side.

She was easily identified because she always raced in a blue skirt, white blouse, helmet and goggles.

The following year, she raced by herself and won her class at the Lochotín-Třemošná hillclimb.

The victory made her a national celebrity overnight.

She then placed first at Zbraslav-Jíloviště in 1925, after which the Juneks bought a second Bugatti to celebrate.

Eventually they also established a close friendship with Ettore Bugatti.

By 1926, Eliška competed in races throughout Europe and quickly gained fame as “Queen of the Steering Wheel.”

In the same year, she was runner-up in the Klausenpass hillclimb in Switzerland and the next year she entered the fearsome Targa Florio, driving a 2.3-litre Bugatti Type 35B with Čeněk alongside as mechanic.

The Targa Florio was a gruelling eight-hour race that wound its way over Sicilian mountain roads; stamina was as essential as speed due to the demands of the rough and often muddy course.

That year, the race consisted of five laps of the 108km circuit making a total of 540km.

With a strong start and at the end of the first lap, Eliška’s elapsed time of 1 hour, 27 minutes placed her fourth, just 10 seconds behind the works Bugatti of Emilio Materassi — and ahead of the works Maserati and Peugeot.

Unfortunately, her impressive run ended abruptly a third of the way into the next lap when the steering gear broke, but that performance earned Eliška great respect from both drivers and spectators alike.

Shortly thereafter, she won the Brno-Soběšice hillclimb and then the 2.0-litre sports-car class of the German Grand Prix at the new Nürburgring circuit.

She was one of the first drivers to walk a course before an event, taking note of landmarks and determining the best line to take through corners.

With her sights firmly fixed upon winning the 1928 Targa Florio, she bought a new Bugatti Type 35B with a supercharged 2.3-litre inline-eight to stay competitive with the top male racers.

Vincenzo Gargotta, one of the race’s press officers and a local resident, accompanied Eliška as she reconnoitered the course.

Periodically she would stop to put chalk marks on posts, walls, and trees along the route.

The field was strong, with works entries from Alfa Romeo, Bugatti, and Maserati.

On race day, the cars were flagged off at two-minute intervals, with Eliška starting well into the second half of the grid.

Fastest driver on the first lap was Louis Chiron in his works Bugatti, followed by Giuseppe Campari in an Alfa Romeo and then Chiron’s teammate, Albert Divo.

Eliška was in fourth place on elapsed time, barely 30 seconds behind Chiron.

On the second lap, Chiron pushed too hard and ran off the track.

Divo had pitted, which put Eliška (dubbed “Miss Bugatti” by locals) in the overall lead, having passed many of the 20 cars that had started ahead of her.

Divo, an experienced Grand Prix veteran, had started ahead of Eliška; following closely, she was ahead of him on elapsed time.

After 4.5 hours, Campari pushed to take the lead by the end of the third lap.

He built his lead, only to lose time with a puncture and drove the last 10km on the wheel rim.

Heading into the final lap, Eliška was still in second and had closed to within a minute, with Divo 10 seconds back.

Campari crossed the line first, but since he had started 40 minutes ahead, the rest of the field had to finish to determine the actual winner.

First to appear was Caberto Conelli in his works Bugatti T37, finishing faster than Campari.

Divo came through faster still, while all were looking for Eliška to cross the line.

It was not to be, as in the last half of the lap she suffered a puncture, losing two critical minutes while her husband, serving as mechanic, changed the wheel.

The engine also overheated during the stop and they were hindered by the loss of water, so Eliška was forced to back off the throttle to nurse the car to the finish.

She placed a commendable fifth out of only 12 finishers, almost nine minutes behind the winner, Divo, and beating top drivers such as Luigi Fagioli, René Dreyfus, Ernesto Maserati, and Tazio Nuvolari.

Eliška was back at the Nürburgring two months later, sharing the driving with her husband in the German Grand Prix, which was run as a sports-car event that year.

On the fifth lap, having just changed places with her, Čeněk was rushing to make up lost time after a tyre change.

He went wide at Breitscheid corner, hit a rock and rolled the car.

Although thrown free, Čeněk collapsed and died soon after from a head injury.

Eliška was devastated and gave up racing as a result.

She sold her vehicles and returned to her first passion, travel.

But Ettore Bugatti was so impressed that he presented her with a new touring car for her trip to Sri Lanka (then known as British Ceylon) and hired her to find new business opportunities in Asia.

From 1948 to 1964, however, the Communist authorities refused to allow her to venture abroad, disapproving of what they termed “the high-flying bourgeois” lifestyle that she had lived.

Like Hellé Nice, her great French counterpart, Eliška was largely forgotten by the racing world.

In 1969 she attended the 40th anniversary of the Bugatti Owners Club in Great Britain and in 1973, published her autobiography — Má Vzpomínka Je Bugatti (My Memory is Bugatti).

In 1989, at the age of 89, she attended a Bugatti reunion in the US as the guest of honour, a fitting tribute to a woman who had blazed a path for so many women to follow.

In 2014, Bugatti even honoured her with a special-edition Veyron.