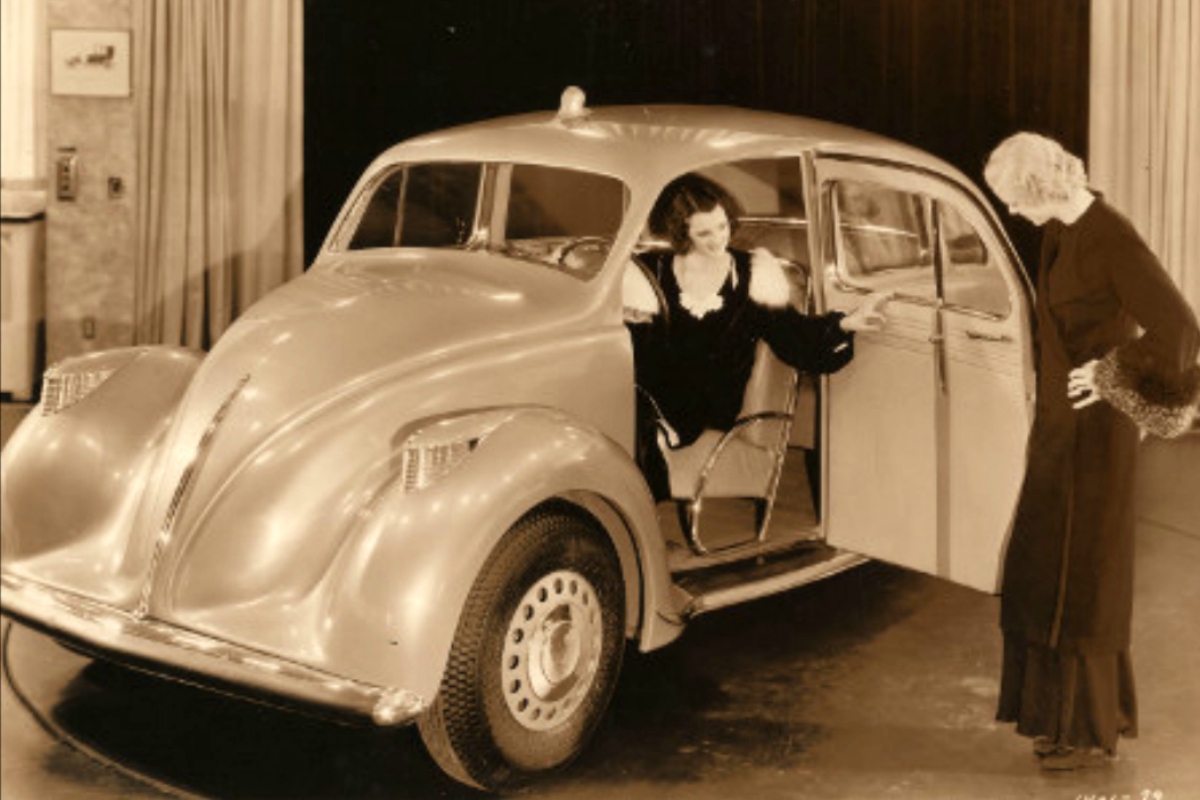 The ongoing influence of those 1950s Motoramas, combined with the regular display of the 1938 Buick Y Job and 1951 La Sabre dream cars, have dominated the media for decades creating the perception that GM invented the dream car.

In 1933 GM unveiled its Cadillac V-16 Aero Coupe, which debuted at the 1933-34 Chicago World’s Fair, demonstrating an all metal roof.

It is credited with influencing the steel industry to develop the wider rolling mills needed to roll sheet steel for an all-metal car.

Ford can also trace its dream car heritage back to 1933.

And here’s the surprise — it went into production.

Ford’s first dream car was the 1933 Briggs-Ford concept, which appeared at the 1933-34 Chicago World’s Fair.

It led directly to the 1936 Lincoln Zephyr.

The reason why the car was at the Worlds’ Fair is an insight into the troubled relationship between Henry Ford and his son, Edsel.

The public story is that the Briggs company, which built Ford’s passenger car bodies, decided to develop this very radical automobile and exhibit it as an example of their technical and styling prowess.

Walter Briggs, who owned the company which bore his name, also knew that Edsel Ford was keen to expand Ford’s range and hoped the concept car would entice Edsel to produce it and, at the same time, be competitive with Chrysler’s new Airflow design.

The real story, however, is provided by author Douglas Brinkley in his book World of Wheels.

Brinkley states that Edsel was the behind-the-scenes champion of the Briggs car from its inception.

He was keen to have it as a new, smaller Lincoln.

Edsel was Ford’s champion of styling and innovation.

He could see that GM and Chrysler were winning considerable sales and market share by promoting styling and technical advances such as hydraulic brakes and front coil spring suspensions.

The Ford company was being left behind.

Edsel had good reason to be worried about his company’s future.

In 1936 Ford had just 22 per cent market share, behind Chrysler with 25 per cent and GM dominating with 43 per cent.

Henry Ford and his hand-picked cronies, on the other hand, dismissed the importance of styling and considered the work of the Ford design team to be largely frivolous.

Brinkley notes that Henry’s yes-men even spied on the Ford designers and its boss, E.T. “Bob” Gregorie, by drilling holes in the studio walls and trying to catch them loafing so they could be fired.

Henry didn’t like hydraulic brakes either, and it was not until 1939 that they appeared on a Ford.

All of this political intrigue meant that to obtain approval for any new car design was a hard fought battle for Edsel and Gregorie.

The Briggs car was a clever way for Edsel to build a business case for a new smaller Lincoln without actually having to argue with his father.

Knowing all of this background Briggs put a sign next to the concept car that read “This car is our design and conception of a streamlined automobile and has no reference to current or future Ford production.”

Public reaction to the concept was very positive, with two exceptions: the steeply sloping front end styling and the rear engine configuration were too radical for the general buyer.

Edsel was of the same opinion, so he had Gregorie work with Tjaarda to give the concept a more upright, pointed front end and had his engineers put the V8 up front.

In his book, Edsel Ford and E.T. Gregorie, author Henry Dominguez says that Tjaarda and Gregorie preferred the sloping front end, but in the end they gave into Edsel, who was paying their salaries after all, and added the sharp lines to the front, created a stand-up grille and blended the rear fenders into the body.

The overall design was signed off for production and on November 2, 1935 the new Lincoln Zephyr was released as a 1936 model.

It went from dream car to driveway in less than two years.

Lincoln went from being a loss maker to a profit centre thanks to the Zephyr.

Such was its impact, that the Zephyr’s styling informed the overall shape of Ford cars until 1949.

The Zephyr’s success also gave Edsel the foundation on which to advocate a major change in Ford’s future direction: the introduction of the Mercury brand in 1939.

CHECKOUT: The neighbours will think it’s the cops