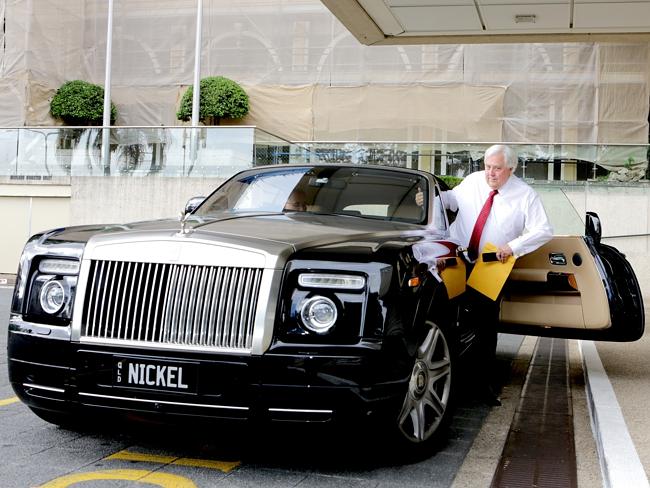 Don’t let this leech sell you a PUP (again)

It’s an election year – twice over in NSW – so I guess there’s little option but to start discussing our options.

If you’re a rightwing “true blue” racist ratbag with prison-grade Southern Cross tattoos engraved all over your butt, you’ll definitely dislike what I think.

The rest of you may find something to politely disagree with — to ponder, to dig into more deeply or simply to applaud.

It would be handy, decision-wise, if one of the parties had a clear policy that intelligently addressed transport, driving, improved safety etc — but none, to date, has devised any policy deserving the attention or support of motorists.

Which leaves us to ask the key question confronting every voter: Is the man/woman seeking our votes a total dipshit, or can we expect them to use their brains and make sensible and principled decisions on our behalf?

Will they break ranks and speak for themselves (and us) on issues like human rights, gay marriage, and taxing the hell out of the little man, when their party machine sucks up to dinosaurs like Peter Dutton and Eric Abetz?

Will they refuse to kowtow to union-schooled apparatchiks beholden to bullying factions that choose candidates with little regard for Joe Public’s interests?

Or are they just weak wankers whose priority is never going to be what WE actually want and need?  (Don’t worry – I despise all politicians equally and guarantee an equal opportunity spray of shit for wannabe captains of our destiny.)

For the moment though, let me focus on the biggest, flabbiest, most egregious lump of lard we are likely to encounter this time round. He’s already spruiking his BS, promising to “make Australia great” while the workers dumped three years ago by his failed Queensland Nickel operation still struggle to salvage their lives.

Yes, step up Clive Palmer, the self-aggrandising grub who just scraped into parliament in 2013 and gathered around him a small alliance of lonely and desperate independent senators.

At the time a lot of young people, disaffected by the arrogance and irrelevance of major party blather, were seduced by his silvery tongue and apparent iconoclasm.

But the Palmer United Party was never going to fight for the common man and didn’t give a toss about the environment and our kids’ future, as shown by his opposition to a carbon tax. Hell, waste from Palmer’s businesses contributes hugely to the pollution of the Great Barrier Reef.

It didn’t take long for his supporters, in and out of Parliament, to desert him. Then he deserted Parliament, declaring he’d had enough and wouldn’t stand again. If only!

Palmer has had a few ups and many downs since then. The Queensland Government refused to bail him out in 2016 when he begged for $35 million to keep Queensland Nickel afloat – not long after he’d milked some $21 million from the company to finance his private fantasies.

They said no because Palmer was unwilling to disclose full details of the company’s finances.

Then QN went belly up. Some 800 workers people are still owed millions, yet the pig-rich Palmer refuses to stump up.

Palmer, of course, evaded direct responsibility for that because he’d made his equally bloated nephew, Clive Mensink, sole director of QN.

When a Federal Court wanted to ask how a struggling company could afford to bankroll a political party, Mensink had conveniently skipped the country. (Three years later, with Federal arrest warrants out, he’s still living the high life abroad.)

So the court tried to ask Palmer why QN had dropped a modest $15 million into his personal account at one time. Naturally, Palmer could not remember: he’d been too busy “serving the people of Australia” in Federal Parliament. (That too stretches belief: over his three-year term he had the worst attendance record among 150 members!)

In May 2017 the court tried again, but now Palmer — apparently at death’s door, clutching pillows and a sickbag as he tottered into court — declared medications had destroyed his memory.

“… it’s extraordinary that someone on narcotics can be required to give evidence,” he complained. “… this is just confirmation that this is a political witch-hunt.”

Now, having ducked the flak, Palmer is miraculously a whole man once again, claiming on national TV that he alone understands how to “fix” Australia. That from a blowhard so desperate for validation and a parliamentary presence that he welcomed a Pauline Hanson reject, Brian Burston, as deputy leader of what is now the United Australia Party. No-one else would do it – they’ve all seen through his façade (pronounce that how you will).

So – it’s your call. Just how smart are you?  Smart enough to ignore this bloated leech and put your vote somewhere it will count?  Or so bloody stupid that you’ll give Palmer a second free ride at taxpayers’ expense?

Somehow, I’m betting you’re a lot smarter than that.

For heaven’s sake, don’t touch the bugger with a barge pole.

CHECKOUT: Ode to the dyslexic moron in a Maloo ute

CHECKOUT:  Don’t drink, don’t do drugs and get your hand off it