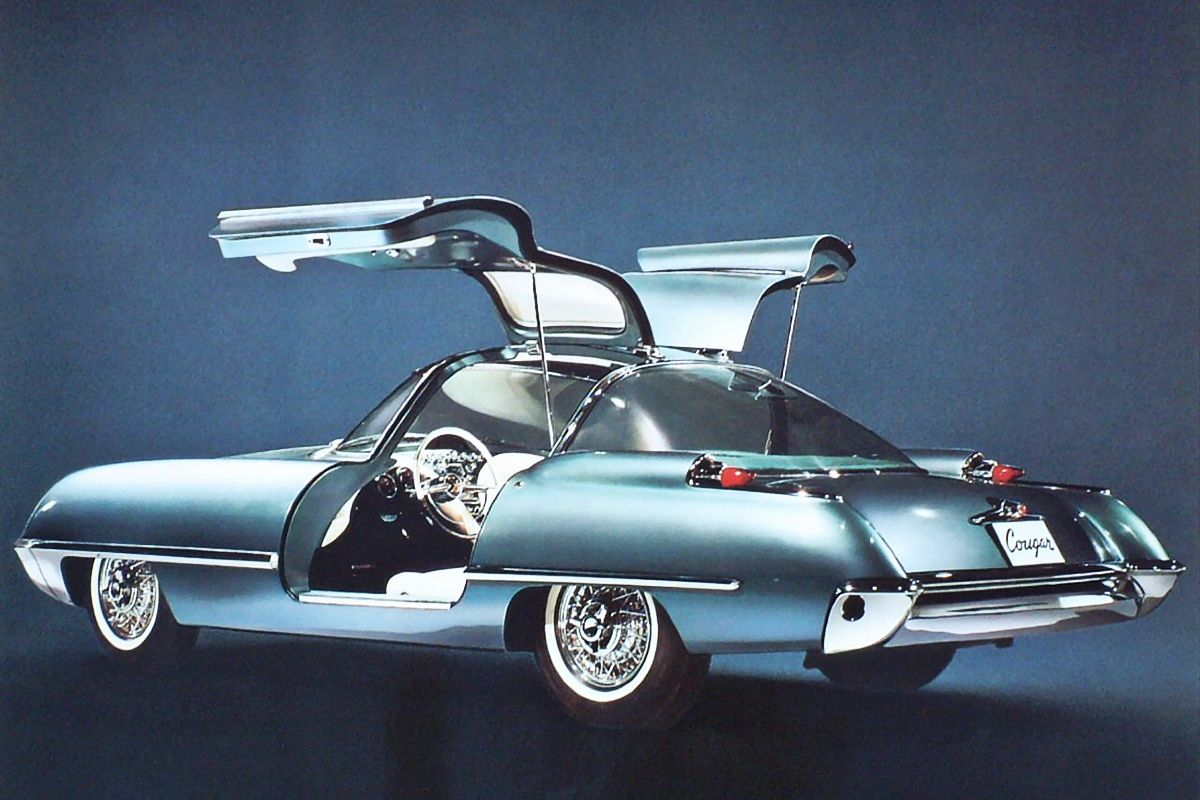 At the beginning of the 1960s, Ford began ramping up its “total performance” image in the USA.

It saw this marketing theme as a way to gain publicity and shift the public’s perception that Ford made only cars that appealed to families.

Iaccoca had not yet had the insights that led him to develop the Mustang, but with the Cougar I and Cougar II — he was starting to focus on the emerging “youth culture” that would form the basis of the Mustang’s success.

And so he decided to have a series of concept cars created to test public reaction to various ideas.

Cougar I was a fully operational car and was said to predict a future Thunderbird design.

What it really looked like was a re-imagined Mercedes 300SL, with its gullwing doors and “pontoon” front fenders.

That’s not surprising, because the original design dated back to a 1955 sketch by Ford stylist John Samsen, coded D523.

Samsen was one of the designers who worked on the first Thunderbird.

He left Ford to work at Chrysler where he shaped the 1964 Plymouth Barracuda.

The Cougar was first seen in February, 1962 at the Chicago Auto Show.

It sat on a mid-fifties Thunderbird chassis.

Originally blue, it was re-painted Candy Apple red for an appearance in the 1963 movie Under the Yum Yum Tree.

The fate of the car is unknown.

The 1963 Cougar II was meant to be a challenger to the Corvette.

With its hidden pop-up headlights, the Cougar II even looked similar to the 1963 Stingray.

Its frame came from an early production Shelby Cobra.

The side windows were activated by a spring-loaded lift mechanism.

A vent panel across the rear valance was supposed to reduce air pressure on the rear window at high speed.

Ford boss of design, Gene Bordinat, also had a roadster version of the Cougar II especially built for his personal use.

A perk of the job.

The Bordinat Cougar, as it became known, too rode on a Shelby Cobra frame.

Although it appears Silver in photos, it is a very light metallic Green.

With the company committed to the Mustang a car to challenge the Corvette was not needed.

Both the Cougar II and the Bordinat Cougar still exist.

They are owned by the Detroit Historical Museum and are sometimes exhibited at classic car shows.