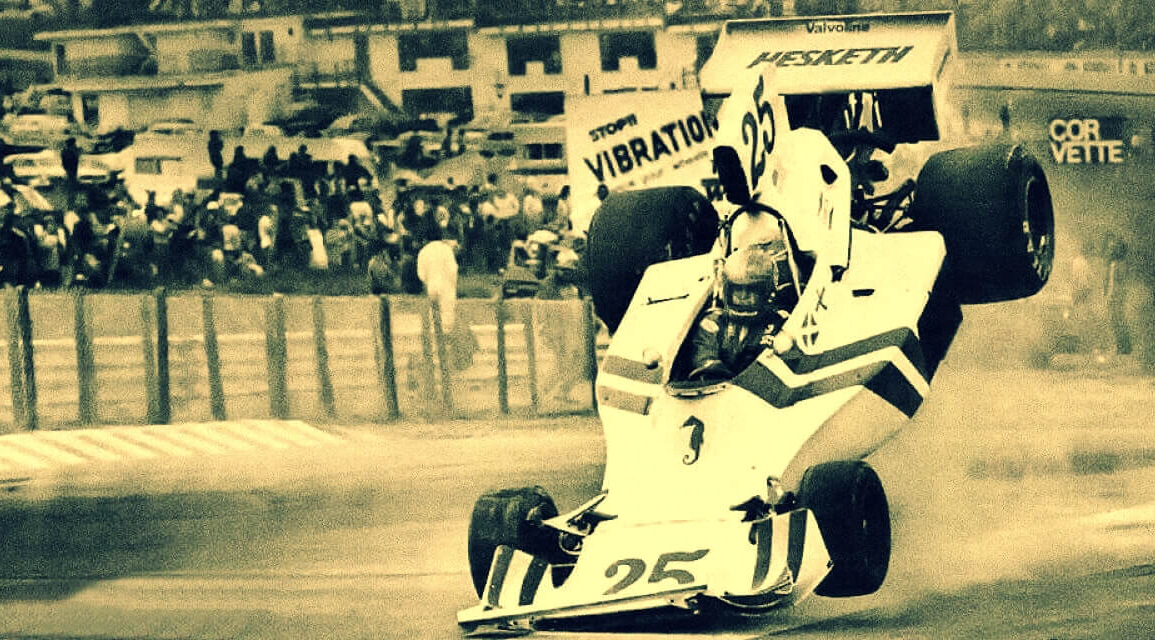 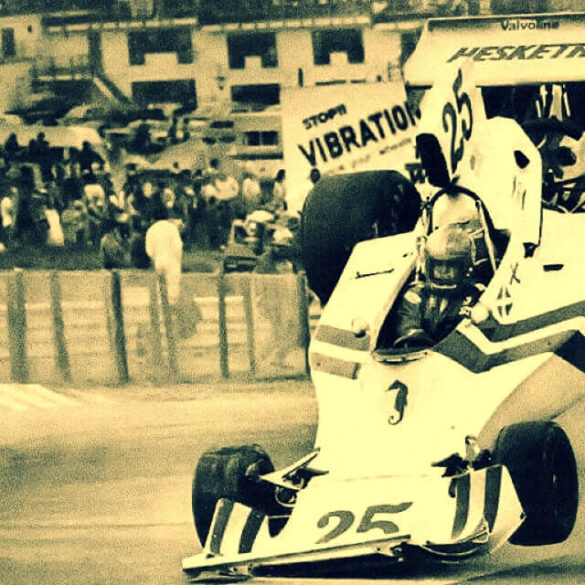 ANYONE who can spell ‘Formula 1’ knows of three times world champion Niki Lauda . . . but who remembers Brett Lunger?

I met the tall, unassuming American in 1977 when I was motoring editor of The Citizen, a brand new Johannesburg daily newspaper that used the South African F1 Grand Prix to herald its arrival.

Lauda, Lunger and all the other drivers and teams in Formula 1 were at Kyalami for The Citizen SA Grand Prix and I interviewed and wrote a profile on every driver for a mammoth 56-page feature that appeared on race day.

Lunger had a major mishap about a week before the race: during practice a wheel came off his Chesterfield-liveried March Ford and the car was severely bent in the resulting trip into the bundu.

I asked if that meant he’d be out of the Grand Prix, but he said — no, they’d rebuild the car.

A few days later he was back, with the March fixed, and we struck up a friendship.

But he never mentioned that seven months earlier he’d heroically saved the life of Niki Lauda, or that he’d served and was wounded in Vietnam, or that he was a (theoretical) man of means. Or that his wife was the daughter of Sir Leonard Crossland, former chairman of Ford of Britain.

Brett came across as a battler, which he was, since his slice of the family treasure would head his way only when he turned 55.

“Between races I visit schools in the US and UK and give talks on car care and road safety,” he told me.

Welsh driver Tom Pryce was killed at Kyalami in The Citizen Grand Prix.

From the Tiger’s Tail press box above the pits, I saw the tragedy that claimed him and fire marshal Van Vuuren unfold.

It was a split-second thing, but 45 years on, the images still haunt me.

Brett Lunger was the first driver I spoke to after that crash.

And that was the last time I saw him.

I’ve since learnt more about the quiet American.

Born in Wilmington, Delaware, he was educated at the elite Holderness School  in New Hampshire, then moved on to Princeton University.

But war erupted in Vietnam and Lunger, much to the dismay of his family, dropped out of Princeton to join the US Marines.

A year later he was promoted to the rank of second lieutenant and he was shipped off to Vietnam for 13 months.

Lunger was wounded in battle and when he left the service as a captain, he returned to Princeton to complete his studies, then dived into a newfound passion as a professional racing car driver.

He enjoyed Formula 5000, but with just seven races in a season, he knew he had to get more track time to get the experience he needed.

So he moved to England, where he could compete in Formula 2, and also easily hop over to Europe for more action, shooting back to the US whenever a Formula 5000 race came up.

It was a real learning curve for him and it worked out well, giving him access to several budding Formula 1 teams as well.

He became friends with David Hobbs, who I had the pleasure of sitting alongside in a GT40 Ford at Kyalami a few years later, and Lunger and Hobbs became teammates in Carl Hogan’s Formula 2 operation.

Lunger was able to put together a sponsorship deal with a pharmaceutical company and bought a Formula 5000 Lola T192.

Hobbs went on to win the title, but Lunger acquitted himself well and finished third in the championship.

Then Dan Gurney, a former Formula 1 champion and a consummate car builder, picked him for the 1974 season and put him behind the wheel of his Gurney Eagle Chevrolet and Lunger finished the season fifth in the F5000 championship.

Back in Europe, he raced in Formula 1 for John Surtees, as a teammate to Alan Jones.

Jones finished fifth in Belgium and at Brands Hatch, and fourth in Japan. A second car, with Chesterfield sponsorship, was entered for Lunger.

Then came that fateful race at the German Grand Prix at Nürburgring on August 1, 1976.

Lauda started the race with a big points lead over James Hunt, and a second consecutive championship seemed a foregone conclusion.

“I knew the ’Ring from racing there in Formula 2,” Lunger later told writer Andrew Marriott.

“We started under mixed conditions and, with a 14.2-mile (23km) track, you knew you were going to have wet and dry sections.

“Like most people I started on wet tyres. I got away pretty well from 24th, while several drivers – including Niki – made an early stop to switch to slicks, because the track was drying. So I was running in front of him, but he overtook me going down to Adenau Bridge.

“He pulled away and after the left corner in that section he was out of my sight, but in my peripheral vision I could see some dust kicked up – that was him crashing.

“That turn was flat out at 140mph (225km/h) even on a damp track, so I came around this blind corner with a car in the middle of the road on fire — and there is not much you can do.

“My car went into his and my fire extinguisher went off with the impact, which probably dampened the flames a little.

“Arturo Merzario came along shortly after that and undid Niki’s belts while I grabbed him and pulled him out.

“I wasn’t a hero. People make a big deal out of it, but it wasn’t that. Maybe my military training helped. I was able to function under duress, and combat in Vietnam was certainly that – you learn to filter out the irrelevant things.

Niki Lauda owes his life to him.

“The next time I saw Niki was on the pit road at Monza in practice, his head all bandaged. He walks up to me, looks me in the eye and all he says is ‘Zank you’. He turned on his heels and walked away, but it was enough.”

There’s clear video of that shocking crash and rescue on Youtube, showing Lunger straddling the fiercely burning Ferrari and grabbing Lauda by his shoulder straps.

Incredibly, just 41 days later the badly burnt Lauda was back in a Ferrari, finishing fourth.

By the end of the season, after missing three races, he lost the championship to Hunt by one point. It may have been the most dramatic championship battle in Formula 1 history. And it likely wouldn’t have happened without Lunger.

What Brett didn’t tell anyone at the time was that his father, by marriage part of one of America’s most famous families, had died the day before the accident.

Lunger’s last Formula 1 race was at Watkins Glen, driving an Ensign, in 1978. He finished 13th.

“I knew the sport was evolving. I had good sponsorship from Ligget & Myers, and we ran a first-class operation. But we were spending about $850,000, and the top teams were spending $3 to $5 million.”

Even then, “It was simply out of reach,” Lunger said. “We weren’t able to compete in terms of lap times, but we were respectable, we were reliable.

“But I saw the sport changing, and I knew the dollars and cents were going to work against me. It was a difficult decision, but it was a decision that had to be made.”

He won or reached the podium in practically every other series he participated in, but victory in a Formula 1 car was just unobtainable for a privateer.

Brett has since worked in marketing, sports promotion and investment management.

He began to write for a variety of outlets, including the New York Times, and also wrote a series of workbooks about the need to take responsibility for your own actions.

He has a website: www.ResponsibilityToday.com, with a mission statement that says, “The goal of the I Am Responsible movement is to spur discussion, to promote action and to generate dialogue. All focused on creating a renewed sense of personal responsibility.”

There’s more: He became interested in flying, a passion he shares with his wife Caroline.

“These days I fly a Cessna Citation Mustang, a great twin-engined six-seater that allows me to do business efficiently. It is a wonderful way to travel,” he said.

More than a business and pleasure machine, he and wife Caroline (there’s no data about what happened to first wife Jo) use the Cessna to fly for the Angel Flight network.

They fly children with life-threatening diseases and injured military veterans from their homes to appropriate hospitals.

“It gets them to where they need to go without the hassle of commercial aviation or perhaps a 12-hour bus journey. It is often a humbling experience,” he said.

Bless you, Brett. You’re one in a zillion.

The many faces of Brett Lunger.

CHECKOUT: Formula 1 — bring your money with you