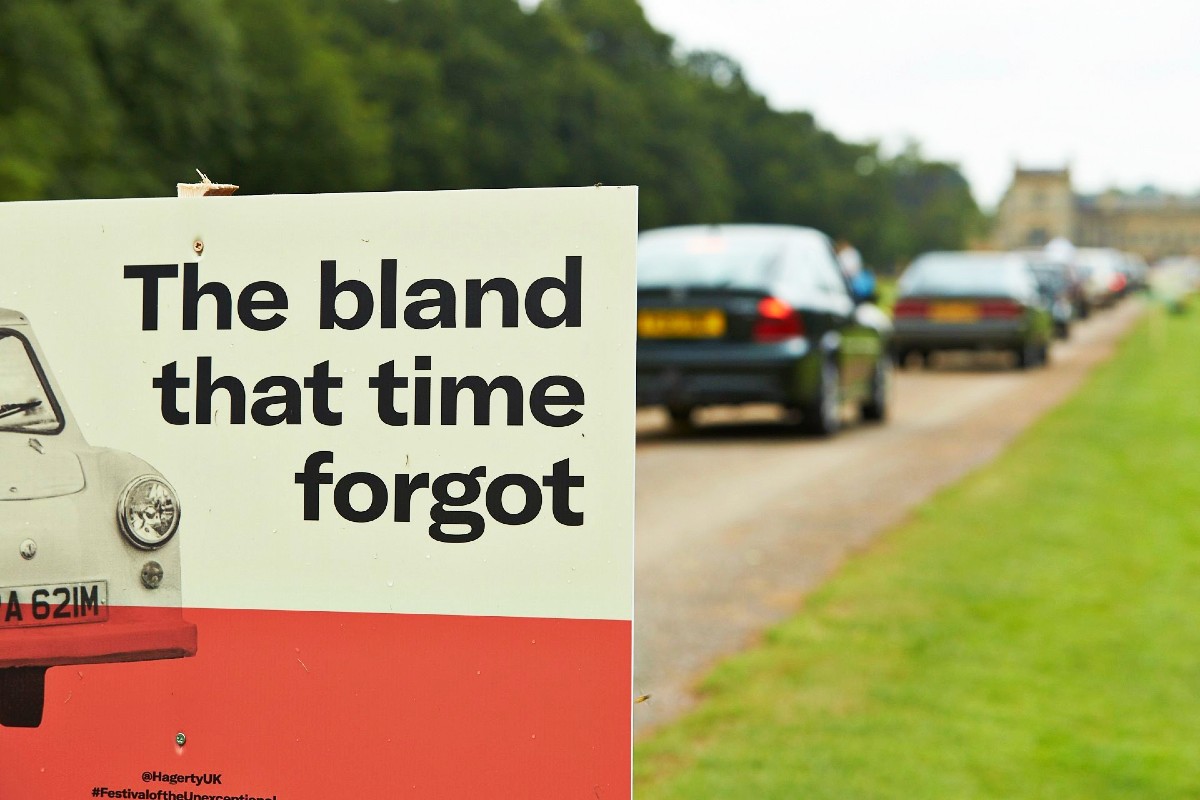 More than 3000 fans took to the manicured lawns of Grimsthorpe Castle, in Lincolnshire, to celebrate the cars ordinary people drive — at the 2021 Hagerty Festival of the Unexceptional.

Beige, mustard and brown dominated the lineup of cars which stretched as far as the eye could see and hubcaps were once again the norm.

Trim levels were basic, rather than plush and optional extras few and far between.

Aa 50-strong concours saw owners and their prized vehicles put through a rigorous vetting process, but ultimately there could be only one winner.

Jon Coupland and his remarkable 1989 Proton 1.5 GL Black Knight Edition fended off a truly impressive field of exceptionally unexceptional cars to take the ultimate prize — a trophy shaped like a mug of tea.

“I have been a car enthusiast from a young age and only acquired the Proton in 2019, so I have never been to Hagerty’s Festival of the Unexceptional before,” a gob-smacked Coupland said.

“I was over the moon to be accepted for the concours, so to have impressed the judges enough to have won the overall prize is beyond my wildest dreams.”

The 30-year old Coupland, who is a police officer, didn’t have far to travel, coming from Boston in Lincolnshire.

His 1989 Proton is, he tells Hagerty, literally the last remaining example of the Black Knight Edition — of which Proton sold 201 in the UK.

Coupland says the car’s original owner garaged the car due to ill-health, in 1993, having covered a mere 3600 miles.

It remained in the garage until 2017, when it was sold to its second owner before being driven for nearly a further 10,000 miles.

Now Coupland uses the car sparingly to show at events like the Hagerty Festival of the Unexceptional.

It’s an early 1100cc, carburettor model that impressed judges with its vibrancy, offering a snapshot of how car companies like Peugeot tried to market product in the 80s and 90s.

Wilson, 27, is a fan of quirky, eccentric cars and tells Hagerty he enjoys the inclusivity of the unexceptional car scene just as much as he does the performance car scene.

He reveals how he got lucky in acquiring the peppermint-coloured – known as Mist Green – Peugeot.

“I was browsing Facebook Marketplace, in March, and came across the car,” he said.

“The pictures were terrible, the description was as basic as could be, yet I knew that it was a potentially significant find and great little car.”

Securing ownership for just £500, Wilson set about mechanically overhauling the car and detailing the exterior and interior, all work completed by his own fair hands.

“I am a bit OCD so I removed all the interior panels and seats and steam-cleaned everything!”

TV presenter and Hagerty columnist Paul Cowland, who is new to the event, judged of the Concours de l’Ordinaire.

He said it was great to see younger drivers embracing and saving old, everyday cars.

“For me, it is the diversity of the scene and the affordability and accessibility that makes events like the Hagerty Festival of the Unexceptional so appealing,” he said.

“The fact that the second-placed car cost just £500 car shows how inclusive this scene is – everyone is welcome and there are no egos.”

Hagerty created the Festival of the Unexceptional in 2014, as a celebration of long-forgotten everyday family cars from 1968-1989 — cars that have played as significant a role in our culture.

The 2021 selection, for cars between 1966 to 1996, offered one of the best concours lawns in seven years, with rare models arriving from across the nation.

Honourable mentions went to Mark Bursa and his 1990 Kia Pride, a car bought new for his mother and which is still going strong.

Simon Hucknall’s 1977 Fiat 128, which has also been in his family from new, won plenty of admirers, as did Chris Howell’s restored 1971 Triumph Toledo, and the similarly restored 1986 Volkswagen Polo C Formel E of Charles Whilems.

James Green, another young entrant and new devotee of the unexceptional car scene, was thrilled to learn his 1989 Nissan Bluebird had been singled out by judges.

Matthew Long, attending with a 1986 Volvo 340 DL, won the Picnic Award, while the crowd and judges alike were unanimous in naming Mark Pallatt, who had entered a sub-10,000 mile 1978 Ford Escort — as the Best Dressed.

CHECKOUT: It’s okay to be ordinary

CHECKOUT: OMG! It’s a Bluebird with the works