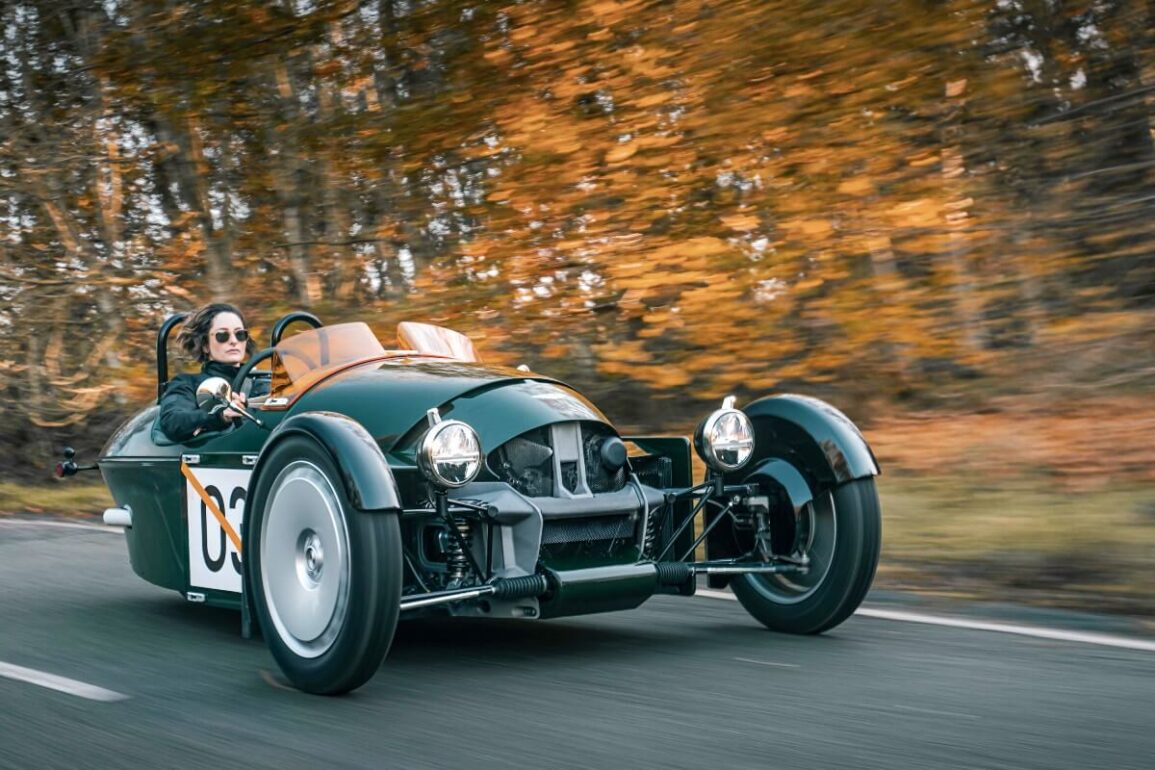 SOME may recall the original Morgans from that quirky UK company appeared to come one short of what many would consider the ideal number of wheels for a car.

Now, in what could be seen as a return to its roots, the company has unveiled a new three-wheeler — the Super 3.

It’s been designed from the ground up to offer new levels of character, thrill and adventure, principles that have defined Morgan’s three-wheeled product since the company was founded 113 years ago.

At the very heart of Super 3’s personality is driving character.

It’s a vehicle that entices you to get behind the wheel, offering a unique combination of mechanical feel, connection to the environment and visual differentiation from anything else on the road.

In comparison with the outgoing 3 Wheeler, created in the style of the 1920s V-twin-engined three-wheelers, Super 3’s designers and engineers have drawn influences from the mid to late century.

Aerodynamic and mechanical requirements have heavily influenced the form and proportions.

This is most notable in the cast aluminium structures that provide the face of the vehicle, brace the engine and control the corner packages, while also directing air into the side-mounted cooling packs.

Super 3 is Morgan’s first clean-sheet design since the launch of the Aero 8 in 2000 and the company’s biggest visual departure since the 1962 Plus 4 Plus.

The exact positioning of the engine, now car-derived and mounted in-board – is of crucial importance.

Every feature, no matter how superficial it may appear, has an underlying mechanical purpose.

Features such as the metallic impressions in the footwell side panels, which stiffen the surface but are exposed as a design feature.

One challenge faced during the creation of Super 3 was the desire to maintain a small footprint while also improving on the turning circle.

Sculpted castings carefully flank the engine, with rectangular radiators sitting outboard of these castings, and this limited the space available for the front wheels.

To overcome this challenge, the radiators have been encapsulated behind extremely thin and flat panels.

The interior of Super 3 has been designed for resilience.

Any part of the interior is completely dust-tight and protected against water splashing from any direction, even down to the integrated USB sockets.

The minimalist dashboard features traditional centre-mounted dials, but for the first time in a Morgan they are fully digital.

Their surrounds, available in both anodised black or silver finishes, are formed from metal — just like any touchpoint in the cabin.

The engine start/stop button, inspired by the ‘missile release’ button on military aircraft, is carried over from the outgoing model.

A choice of seat materials includes vinyl, water-resistant leather, saddle leather with enhanced durability and a technical fabric that combines a high level of water resistance, UV resistance and ease of maintenance offering an appealing alternative to leather.

Underpinning the Super 3 is a bonded aluminium superformed monocoque platform.

Not only does this make for a lighter and more rigid chassis but also provides packaging benefits and gives more interior occupant space with no intrusion.

Its rigidity not only benefits the car’s dynamic capability but also enhances safety, with Super 3 meeting the same exacting M1 and Reg. 12 front impact standards as Morgan’s Plus Four and Plus Six four-wheeled cars.

In 1933, when Morgan introduced the F-Type three-wheeler, it made the switch from V-twin power to a conventional Ford engine, housed under a bonnet.

Powerful, efficient and characterful, it provides a combination of attributes which make it perfectly suited to its application.

A lot of work has gone into tuning the engine’s acoustic content and enhancing its natural and distinctive three-cylinder character.

It is exceptionally compact and has allowed Super 3’s design to remain true to form without compromising passenger space.

The engine is coupled to five-speed Mazda gearbox, as found in MX-5 and used in the outgoing Morgan 3 Wheeler.

Unlike the previous model, however, no compensator is required in the driveline, therefore minimising complexity and weight.

The bevel box has been re-engineered using a custom tooth profile, and it drives through a carbon fibre-reinforced drive belt.

The powertrain meets motorcycle Euro 5a, which is in line with cars, and will meet Euro 5b which includes OBD requirements.

The dash from 0 to 100km/h takes 7 seconds (pending final certification) while the three-wheeler has a top speed of 209km/h.

Core to any Morgan product is driving enjoyment.

Super 3 is fundamentally stable, achieved through a dedication to keeping the vehicle’s mass within its contact triangle and feels planted but with an assertive turn-in feel.

Pull-rod suspension is key to this, bringing mass inboard and reducing unsprung mass while aiding airflow to the radiators.

Morgan has worked in partnership with Avon to develop its own 20-inch diameter tyre.

The rear tyre on a three-wheeler is often subjected to the dirtiest, wettest part of the road, and as the driving tyre it must maintain appropriate contact and grip.

Reviving the iconic Speedmaster name, it’s is based on the look of a heritage motorcycle tyre with ‘ballooned’ sidewalls — but has been engineered specifically for Morgan and is closer to a car tyre in design.

Extensive development has also taken place to tune the feel of the controls.

For example, the clutch is deliberately well weighted with a short travel, to reflect the short throw of the gearbox.

Particular attention has been paid to the pedal spacing, allowing easy heal-and-toe gear changes and retaining a playful feel.

While mechanical connection was crucial, refinement has been enhanced thanks to a combination of the rigidity of the bonded chassis and extensive drivetrain development.

A new bevel box with custom tooth profiles (see drivetrain, above) reduces additional noise, and has been carefully tuned to ensure it maintains a straight-cut, race-car feel but without an overbearing mechanical noise.

Like every Morgan, Super 3 will be built in Malvern, Worcestershire, at the company’s Pickersleigh Road factory.

Skilled craftsmen and women have been handcrafting cars in these hallowed red brick buildings since 1914, just five years after HFS Morgan invented the first Morgan, known as ‘The Runabout’.

Super 3 is available to order from Morgan dealerships in the UK, Europe, the USA and other select markets.

Customers in the UK and Europe will receive their vehicles first, with USA deliveries following later in 2022.