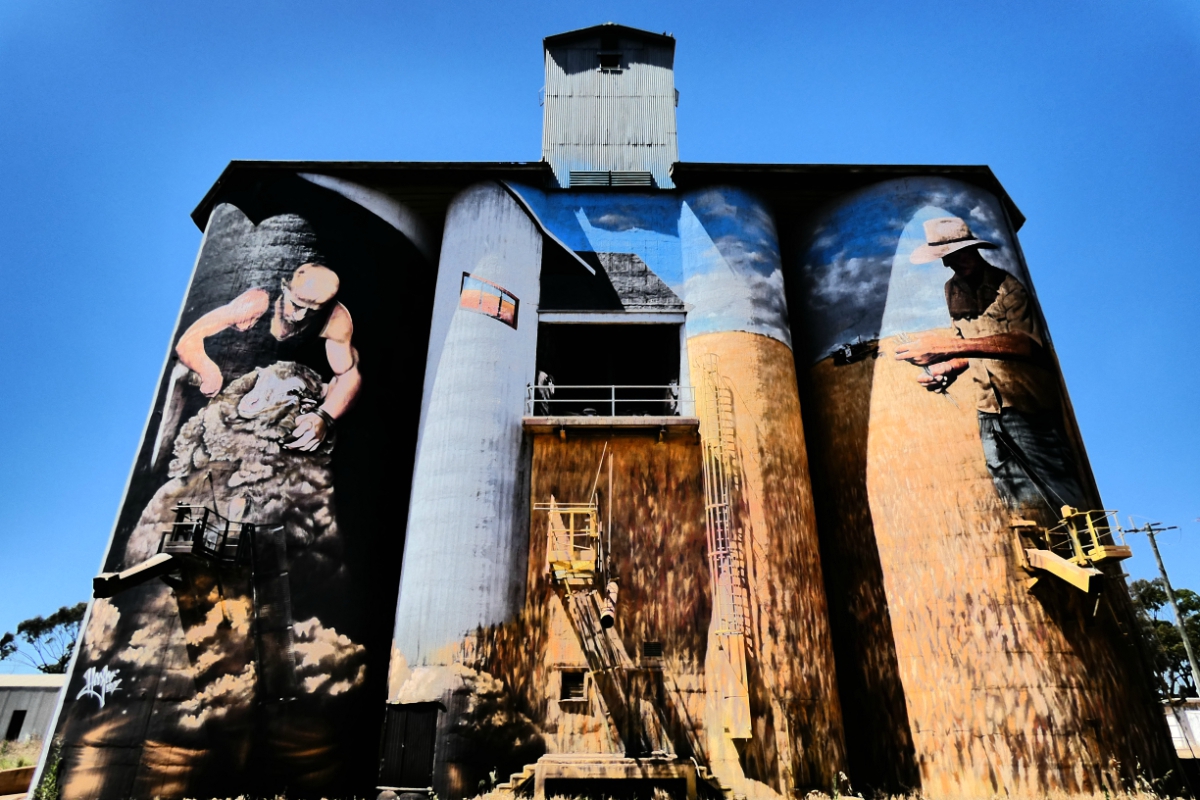 Day 12. Our Broken Hill extravaganza is drawing to a close.

Today we head from Goolgowi to Parkes, a distance of about 300km, with stops along the way at Rankins Springs, Weethalle, West Wyalong and Forbes.

Goolgowi is a bit of a non-event, apart from the food at the local pub.

Our motel rated barely 1.5 stars, but at least it was clean.

I think the truckie who spent the night across the road from the pub with a public ensuite got the better end of the deal.

Along with the bangers and mash from Ivanhoe, I want to take home the rissoles from the Royal Mail Hotel.

My wife thought the crumbed cutlets were pretty good too.

Rankins Springs, about 50km down the road, is a leafy little hamlet of about 300 people.

Wally’s Junk Art Gallery is an eye-catcher, with a yard crammed full of metal figurines, inspiration for many of them drawn from the Dr Who television series.

Unfortunately it was locked up tight when we arrived.

Across the road in the park, the map of the area looks like it was drawn by a five-year-old child.

A storyboard tells the tale of Chinese labourers employed to ringbark trees in the district between 1895 and 1912.

The gangs sometimes numbered more than 100 men and were paid one shilling per acre to do the job, with contracts to ringbark as many as 60,000 acres.

A whole group is reported to have died however when they found and cooked bags of flour laced with strychnine that station owners had set aside to get rid of animal pests.

They are rumoured to be buried with their belongings in a mass grave about a quarter mile east of nearby Sim’s Gap.

From Rankins Springs we push on to Weethalle, another town of about 300 people, originally comprising homesteads allocated for returned soldiers in 1921.

Of note the grain silos adorned with art and the Road Kill Grillz Cafe.

Further down the road West Wyalong with a population of 2600 is the largest town in the Bland Shire which has formed sister city relationships with the towns of Dull in Scotland and Boring in the United States.

West Wyalong is a major producer of eucalyptus oil, but was also the scene of a major goldrush in 1893, producing more gold in its day than any other place in the colony.

Thank goodness it’s also home to a carwash, so we took the opportunity to remove the baked on remains of locusts from the front of the Citroen C5 Aircross — it was covered with them.

Down the road in Wyalong (there’s a Wyalong and West Wyalong) there’s some lovely old buildings worth photographing and a cool “hot glass” gallery.

Heading out we have one more stop to make at Forbes before calling it a day at Parkes, home of The Dish.

Forbes is a substantial town of some 9000 residents and boasts a car museum.

No prizes for guessing where we went first?

Without air conditioning it’s stinking hot walking among the cars and my time was limited.

One item that caught my eye was a 1999 Kia prototype said to have been produced in collaboration with Lotus.

One of six made, the museum claims it could be the only one left in the world, with its body made entirely of plastic.

The 1902 English Mechanic looks interesting too, designed by Thomas Hyler-White in 1899 as part of a competition to “design a practical motor car that the man of moderate means could build.”

The leafy town centre with its park and stylish rotunda boasts a CBD choc full of lovingly restored old buildings, including the Teacher’s Residence that dates back to 1860s.