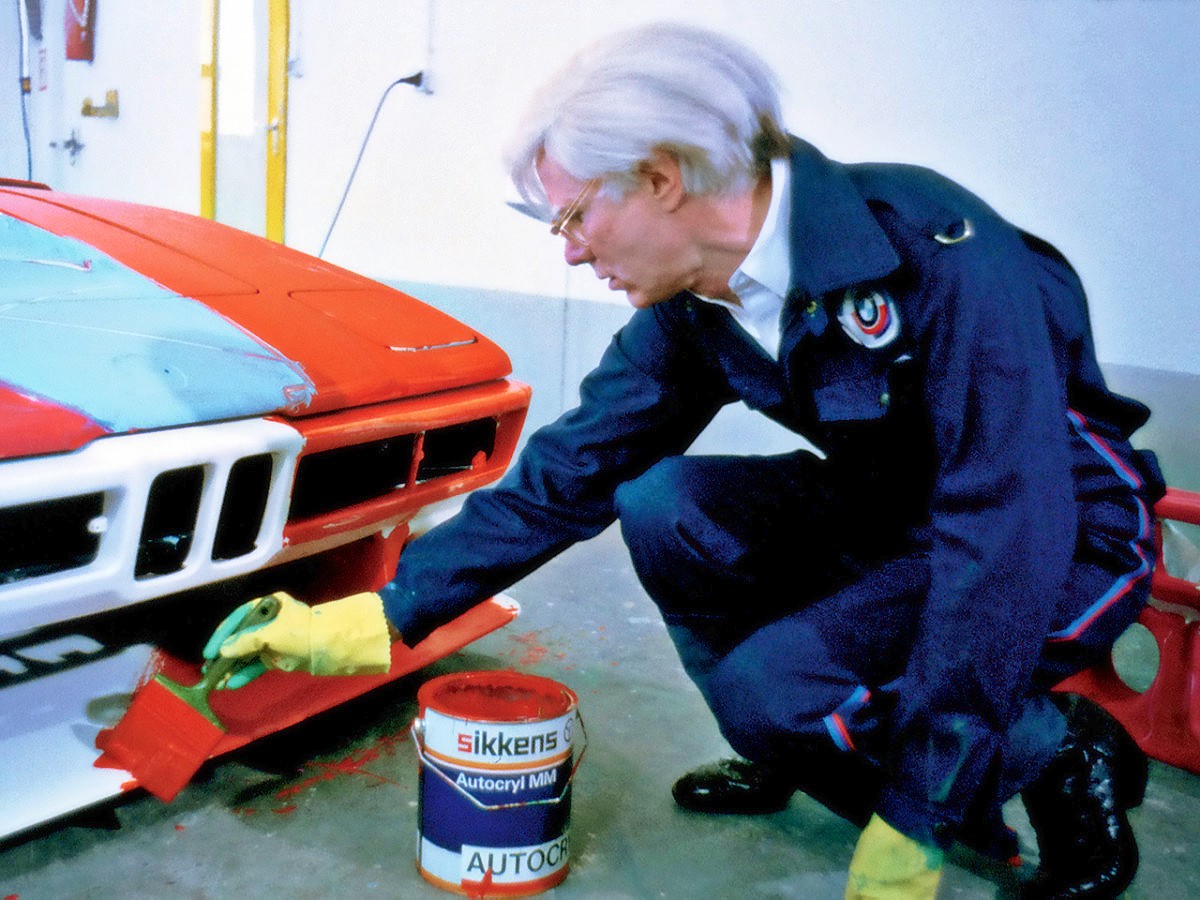 The man credited with coining the phrase “15 minutes of fame” is best known for Campbell’s Soup Cans, silkscreens of Marilyn Monroe and the eight-hour film of the Empire State Building — in which nothing happens.

But there’s more to the eccentric American multimedia personality than this, including a long and colourful association with the motor industry.

In 1979, Warhol was commissioned by BMW to paint the fourth of its so-called Art Cars — a Group 4 version of the BMW M1.

Unlike the three artists that preceded him, he declined to use of a model to practice on, opting to paint straight on the real thing from the word go.

And go he did — legend has it the whole job took just 23 minutes.

It says something about the ephemeral nature of the Pop Art Movement that has its roots in the 1950s.

It challenged tradition and sullied the scene with images drawn from popular culture, such as advertising and comic books, as well as  mundane, mass-produced objects.

In 1986, German art dealer, Hans Meyer, commissioned Warhol to a paint the iconic Mercedes-Benz 300SL coupe — yje one with gullwing doors — to celebrate the 100th anniversary of the invention of the motor car.

When Benz saw the finished product, it commissioned a whole series to track the evolution of its designs.

That series, Cars, represented the first non-American designed objects that Warhol had portrayed in his work.

A total of 80 pictures were planned as part of the project, based on 20 models selected by the company.

Warhol completed 36 silkscreen prints and 13 drawings of eight models before his sudden death in 1987.

Critics have lamented his “passionate avarice”, accusing him of crossing the line between art and advertisements.

One of the paintings, Silver Car Crash, became his highest priced work to date when it sold at Sotheby’s Contemporary Art Auction in 2013 for US $105.4 million.

The painting depicts the aftermath of an accident, with a twisted body sprawled across the mangled interior of a vehicle.

It is one of four double-panel car crash paintings that Warhol created in 1963.

The previous record for a Warhol was set in 2007, when $71.7 million was paid for Green Car Crash (Green Burning Car I).

He also used Amiga computers to generate digital art, including You Are the One, which he helped design and build with Amiga, Inc.

He also displayed the difference between slow fill and fast fill on live TV with singer Debbie Harry as a model.

Amaya received only minor injuries and was released from the hospital later that day.

Warhol, however, was seriously wounded and barely survived.

He suffered physical effects for the rest of his life, including the need to wear a surgical corset.

According to news reports, he had been making a good recovery from gallbladder surgery in New York Hospital, but died in his sleep from a sudden post-operative irregular heartbeat.

Like his life, Warhol’s funeral was a big production.

His brothers took his body back home to Pittsburgh in Pennsylvania, where a wake was held with an open-coffin before he was buried next to his mother and father.

The solid bronze casket featured gold-plated rails and white upholstery, and Warhol was dressed for the occasion in a black cashmere suit, a paisley tie, a platinum wig and sunglasses.

In his hands, he held a small prayer book and red rose.

The coffin was covered with white roses and asparagus ferns, while speakers at the funeral included Yoko Ono.

Before it was lowered into the ground, Paige Powell, a photographer who worked for Warhol, dropped a copy of Interview magazine, an Interview T-shirt and bottle of Estée Lauder perfume “Beautiful” into the grave.