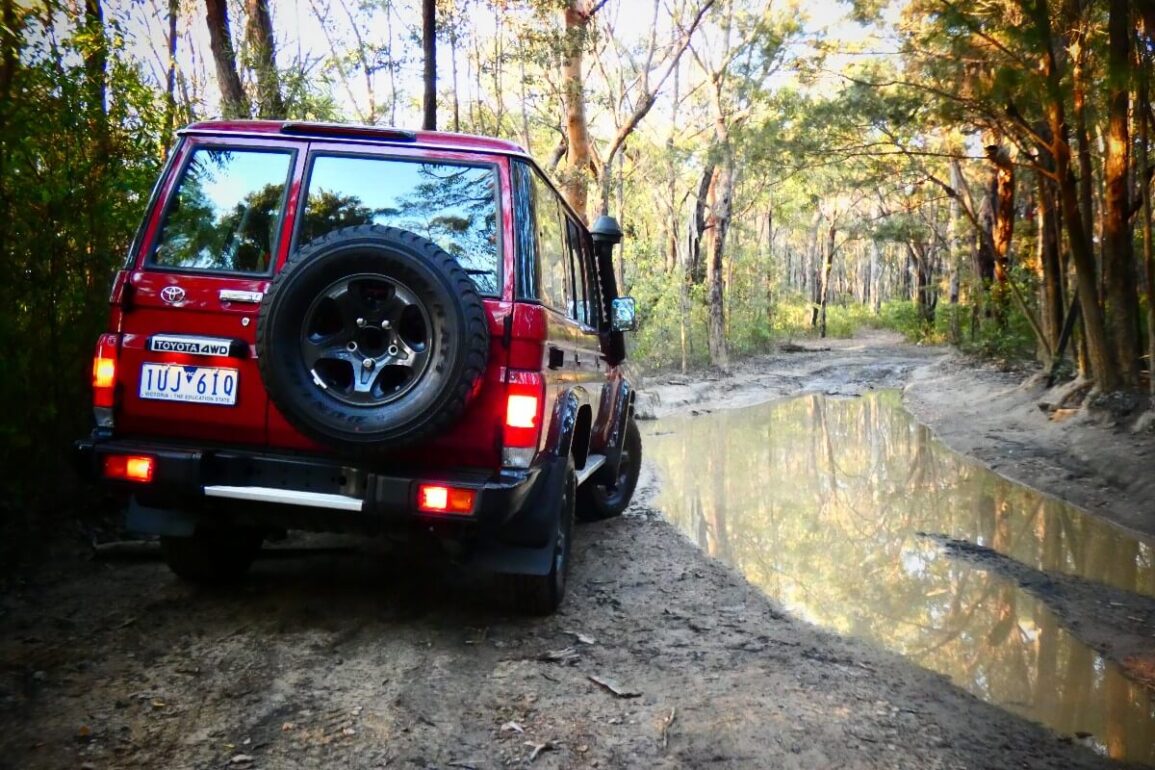 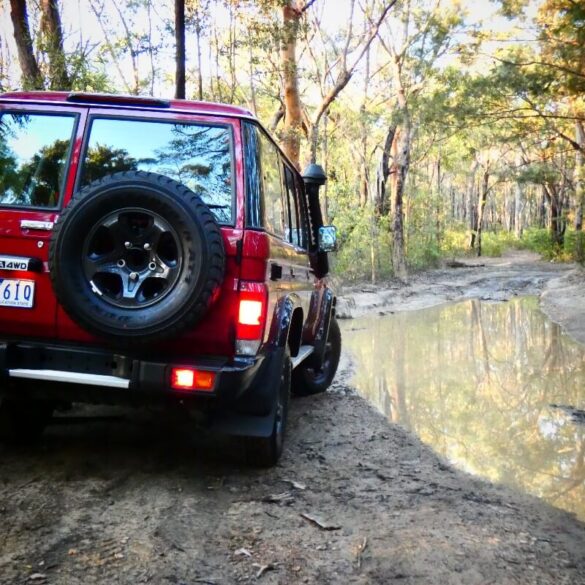 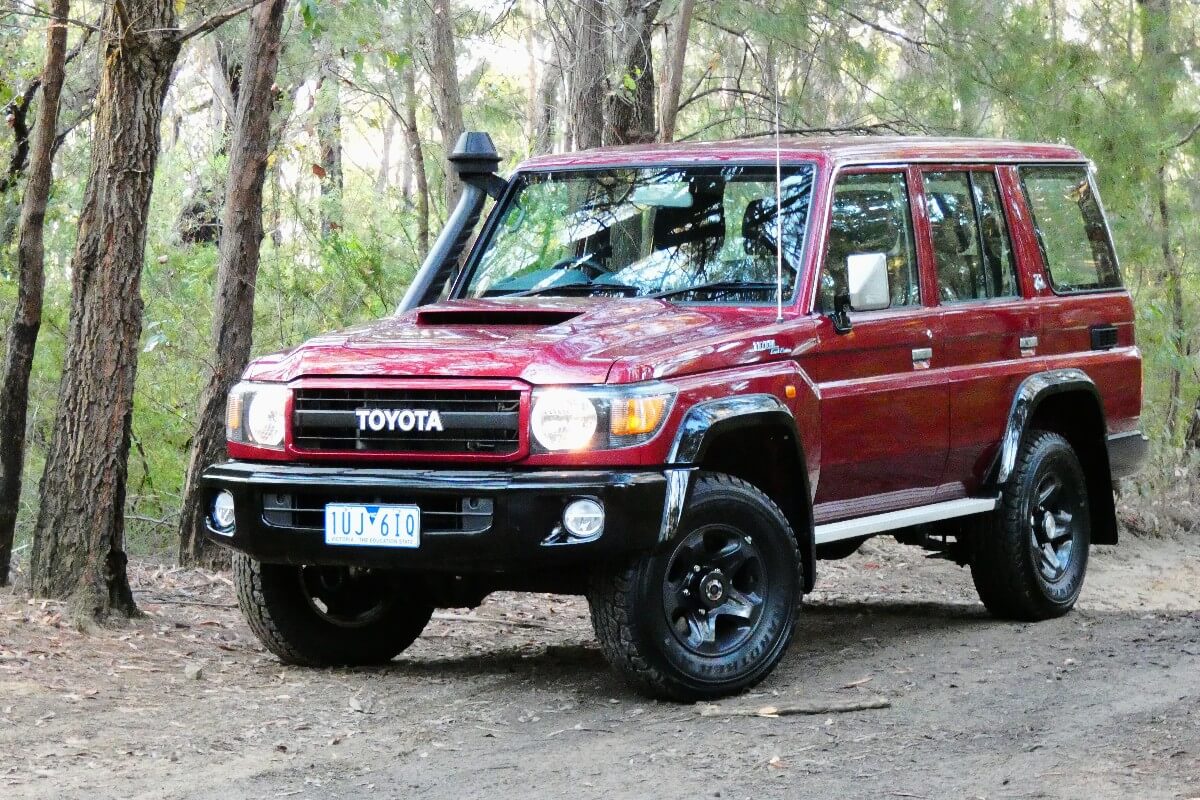 If you’re looking for something to go off road in, then look no further.

If you’re not, then look elsewhere.

Land Cruiser 70 Series is without doubt the most capable 4×4 we’ve driven, a hard-edged, no compromise off roader built to tackle the rough stuff — a workhorse built strong for commercial application.

But ladies and gentleman, this is not a car for everyone — so please choose carefully.

The one we’re looking at is the wagon, in fact the 70th Anniversary wagon, marking the debut of the Toyota BJ way back in 1951.

Just 600 Anniversary editions will be offered — 80 of them wagons. 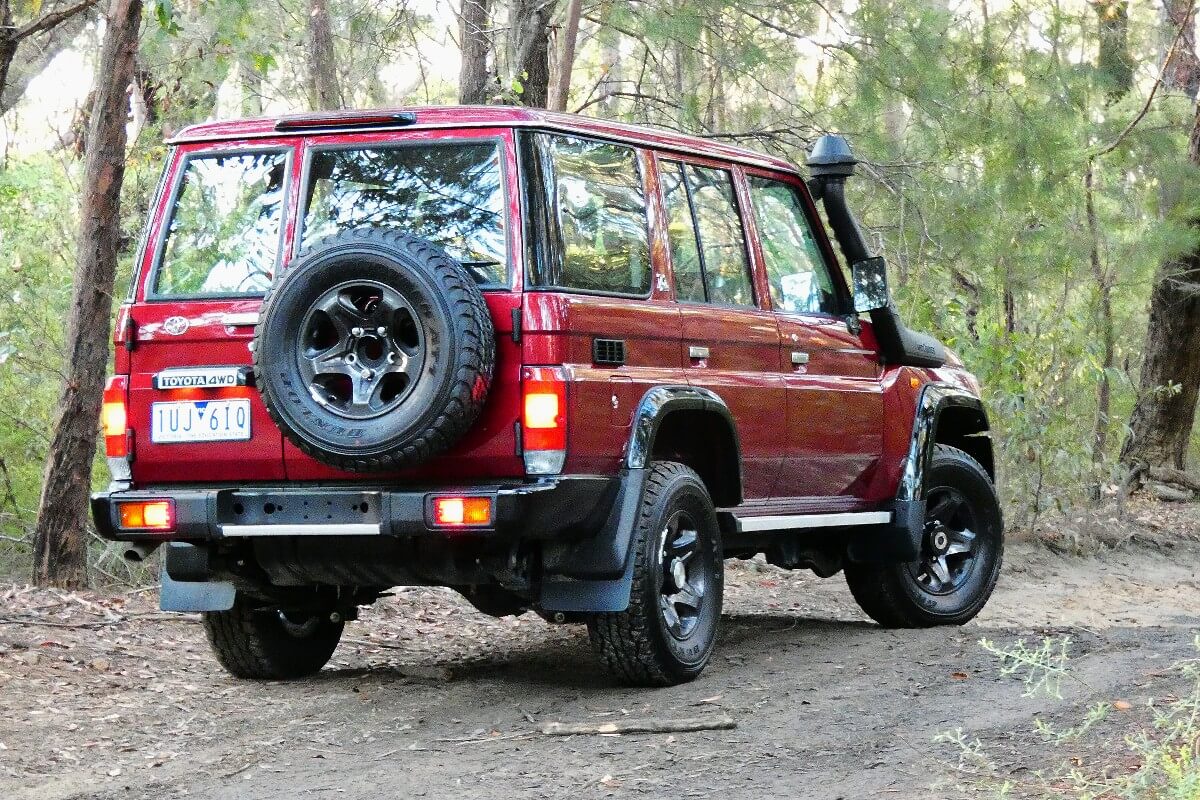 The Land Cruiser 70th Anniversary special edition is based on the flagship GXL grade that is offered as a 76 Series wagon, plus 79 Series single and double cab chassis pick-up.

The 70 Series, commonly referred to as the Land Cruiser “workhorse”, was last updated in 2016.

The dark treatment continues with black 16-inch alloys and headlight bezels, while the front fog lights and daytime running lights have been upgraded to LEDs.

Marking the anniversary is a ‘Heritage’ Land Cruiser badge above the front wheel arch, as well as a ’70th Anniversary’ emblem.

Inside, there’s a number of premium options not previously offered on 70 Series.

The seats are trimmed in synthetic black leather, with leather accents for the steering wheel and gear shifter.

There’s also some woodgrain-look trim for the wheel and instrument panel, silver accents for the air vents and black treatment for the switch trims on the doors.

A newly designed black centre console has also been fitted, along with two additional 2.1A Type A USB chargers plus a pair of cupholders.

What the 70 Series doesn’t get is many of the mod cons that we take for granted these days.

Things such as push-button start, auto lights and wipers, parking sensors and a rear view camera — not to mention a touchscreen that you don’t need a magnifying glass to see (it’s 6.1 inches).

There’s four 2.1A power sockets in all, but none of them seemed able to deliver sufficient juice to charge my wife’s phone in a reasonable period of time.

Want to adjust the external mirrors. It’s time to dial friend, one who can stand outside and move them around for you — until they find the right position.

The radio aerial is metal, motorised and rises like magic when you turn on the ignition — they way they used to back in the ’80s.

But, in some concessions to the modern world, it does get cruise control, power windows and remote central locking. 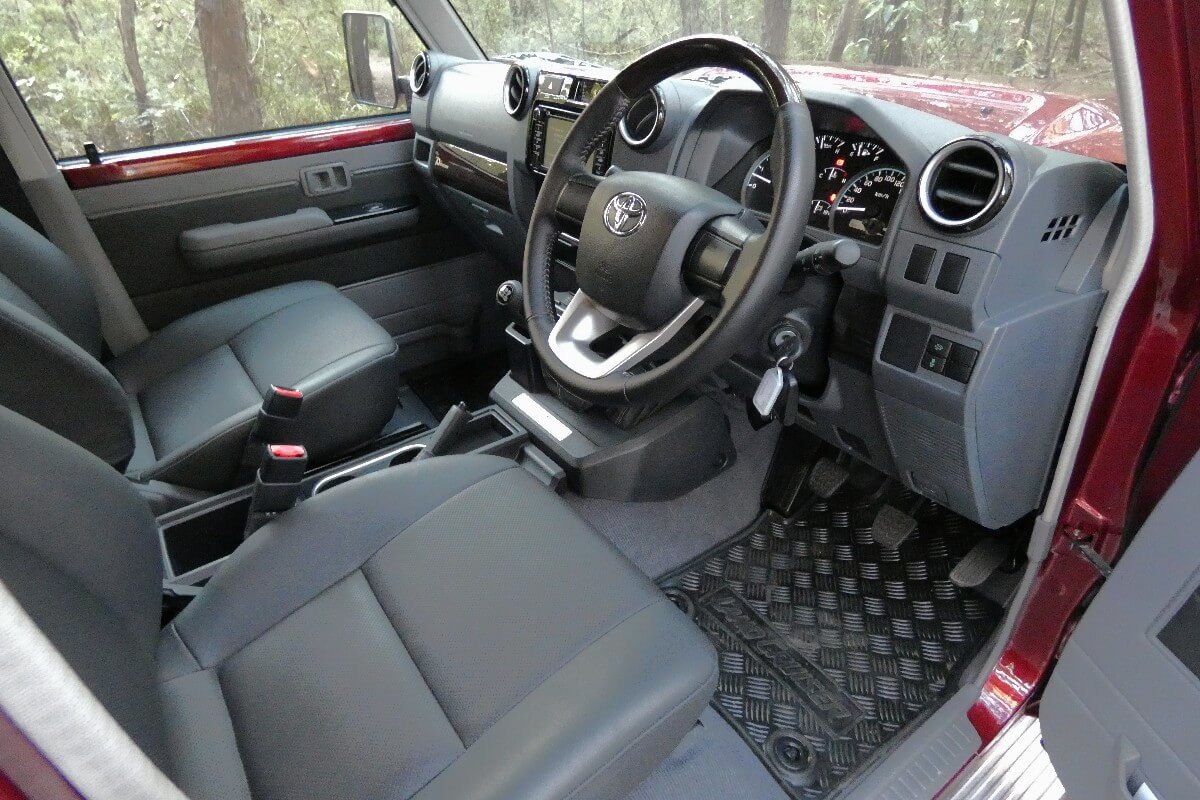 It’s paired with a five-speed manual transmission that has been tweaked, with taller second and fifth gears, the latter allowing it to cruise more easily on motorways.

Drive is to the rear wheels most of the time, with high and low range gearing, auto-locking front hubs and front and rear diff locks.

Shifting between high and low range is accomplished via a traditional transfer lever (a second, stubby little gear stick).

Combined fuel consumption from the single 130-litre tank is a claimed 10.7L/100km.

Other models get two 90-litre tanks making for a combined total of 180 litres.

Turning circle is 12.6 metres and can be something of a problem.

You get disc brakes all round, but the back is underpinned by old school leaf springs.

The wagon seats five with barn-style 60:40 split rear doors and a basic rear bench that is better suited to two bods than three.

Other improvements include under-dash padding for the passenger and relocation of the steering link behind the front axle, for increased safety.

Although the cab-chassis version earns a five-star safety, this rating doesn’t carry over to the wagon.

The bonnet now has a pronounced “power bulge”, which contributes to sufficient clearance above engine-bay components to meet pedestrian impact requirements.

Newly adopted VSC automatically disengages in low range. A-TRC, which eliminates the need for a limited-slip differential, operates in high and low ranges, but can be disengaged for sand.

Clearly, this is not a vehicle designed for city streets.

It’s a long throw shift action and the clutch requires some effort and practice, and it’s possible to miss third if you rush it — but at least it holds the brake for a second or two on hills.

It can also take three gear changes just to get across an intersection, unless you start off in second — which is the recommended method.

Be warned. Other drivers are sure to become impatient.

Volvo V60 Cross Country: On the off chance

Tight turns, even moderate turns, can necessitate a three-point turn.

Surprisingly, however, it’s quite comfortable and even my wife likes driving it.

Initially, I found myself wanting a sixth gear, but the taller fifth proved adequate, with the tacho turning over around 2000 revs at 110km/h.

The cabin is a big echoey space with plenty of road noise at higher speeds that can render the bluetooth connection to your phone almost unusable.

It’s always been a treat to take it  off the beaten track, to explore washed out fire trails and the addition of traction control and hill-start assist makes it even better.

Take it slow, look first, don’t do anything silly and the Land Cruiser won’t let you down.

70 series is covered by a 5-year/Unlimited kilometres warranty, with service intervals of 10,000km and services capped at $375 a time. 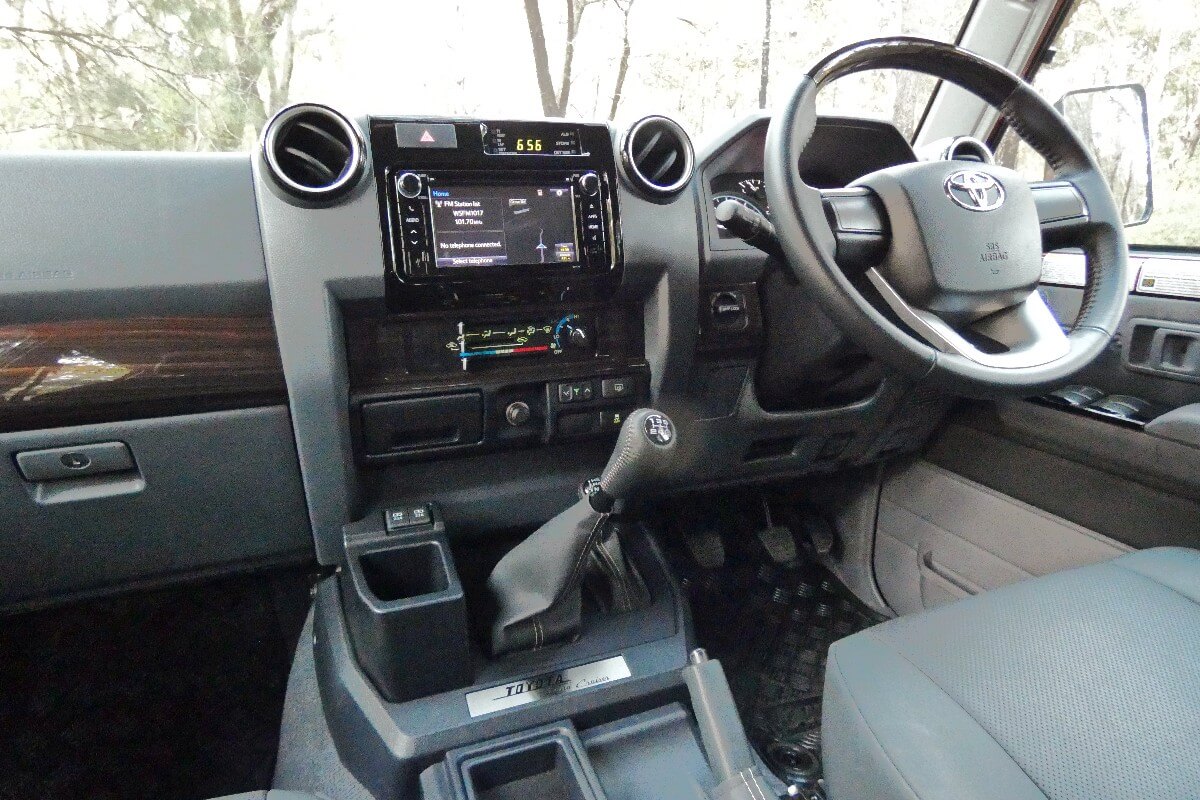 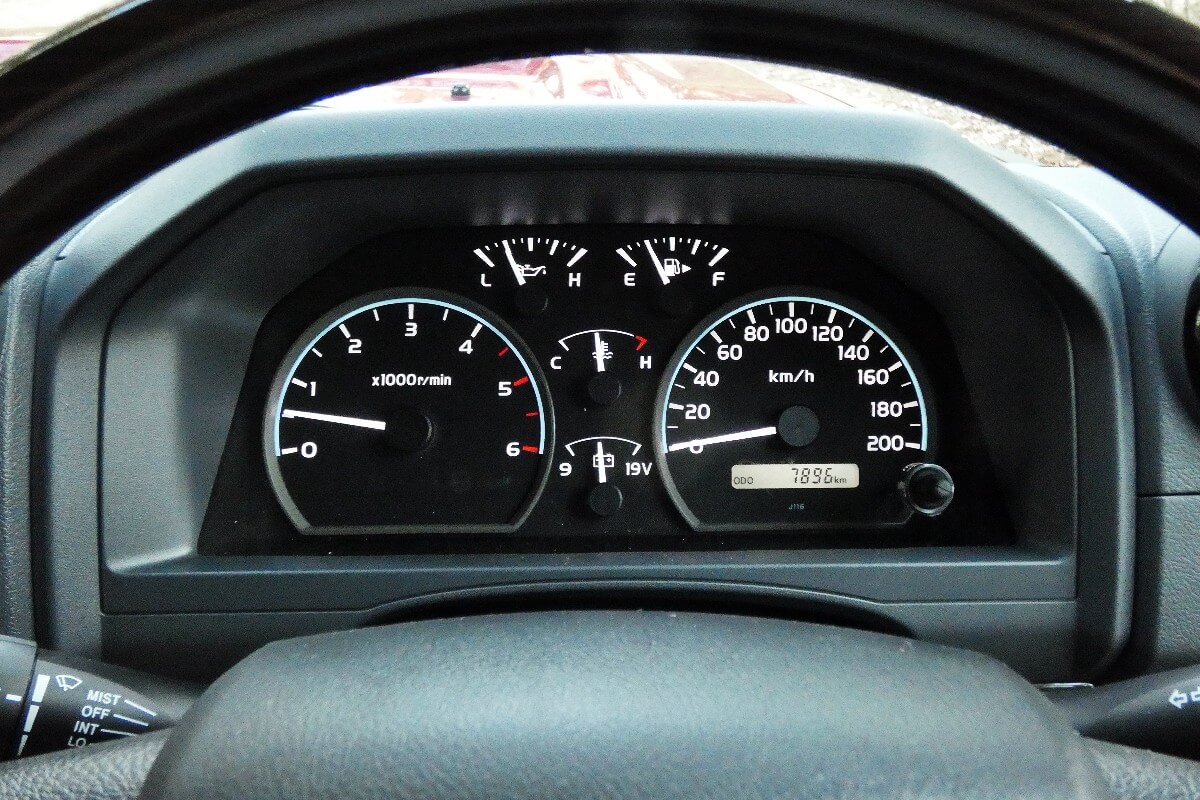 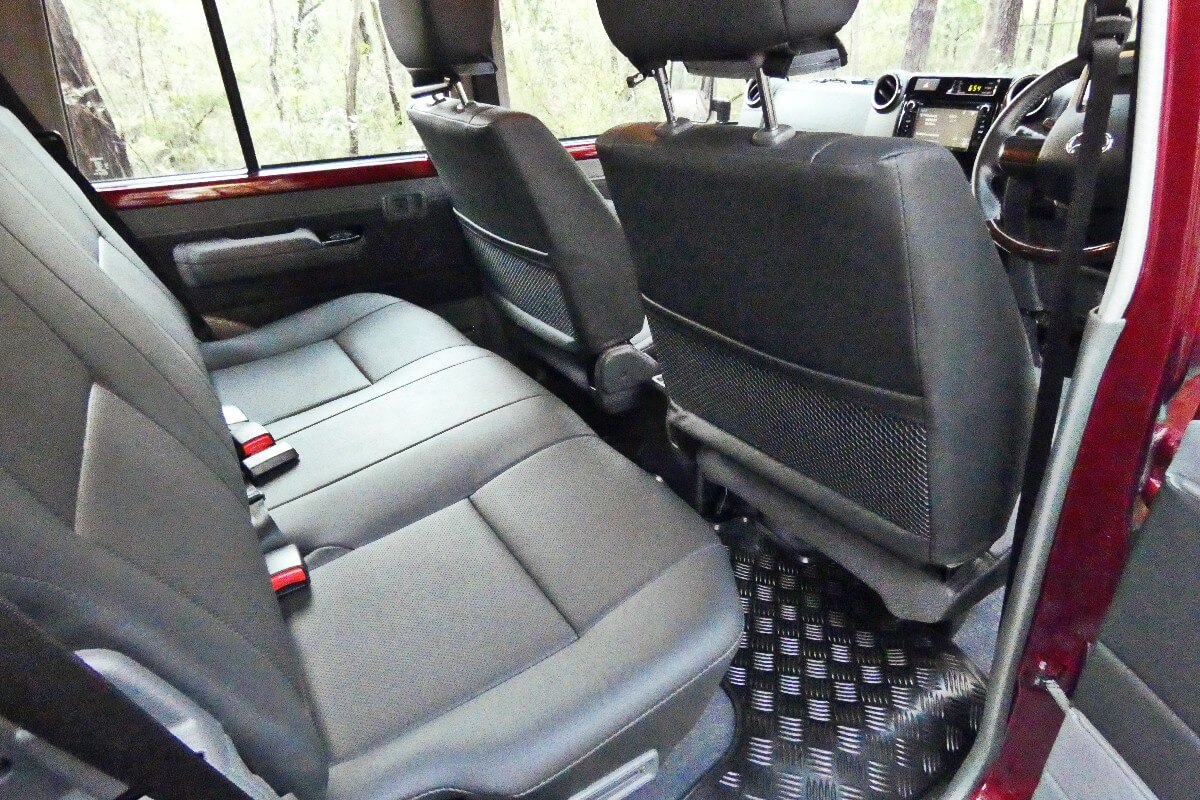 Love this car. Love the Land Rover Defender too, but I’d take the Cruiser any day of the week.

Having said that, I’m yet to drive the new Defender – it’s just that Australia never seems to get a guernsey as one of the places testing took place. 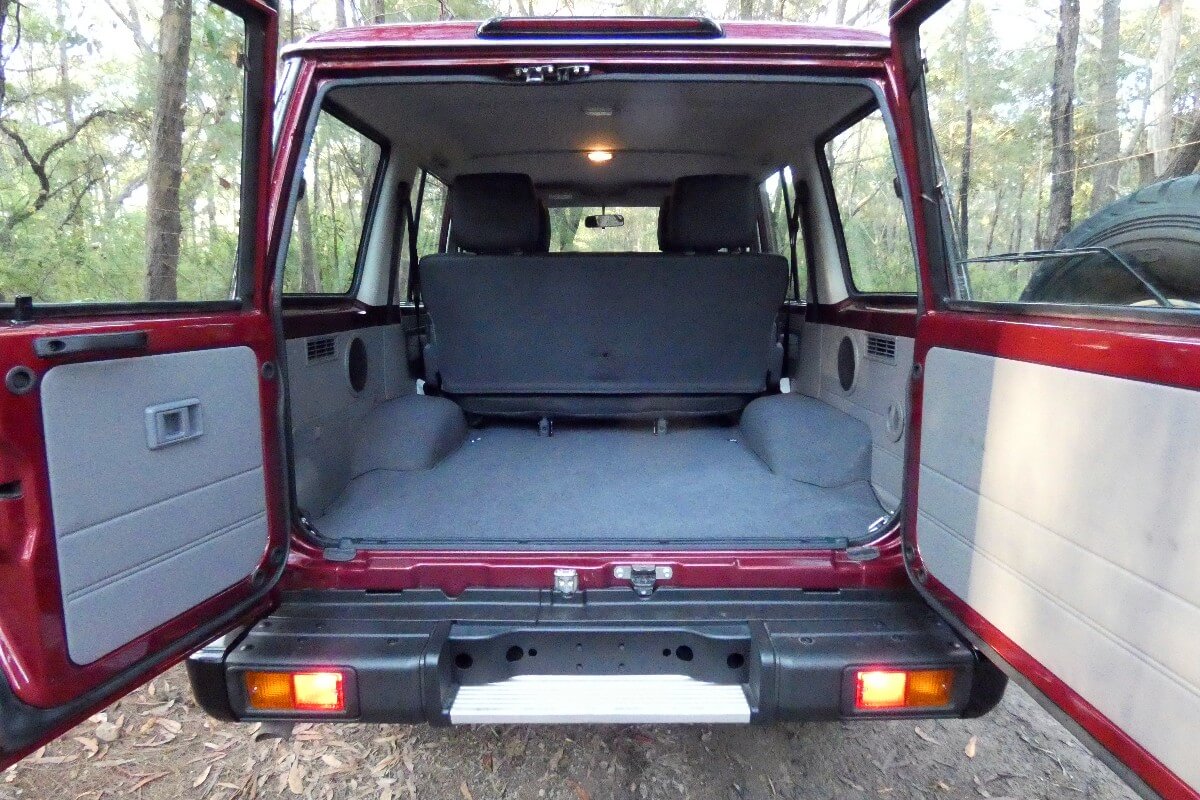 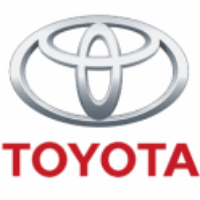 Check out deals on the Toyota Land Cruiser