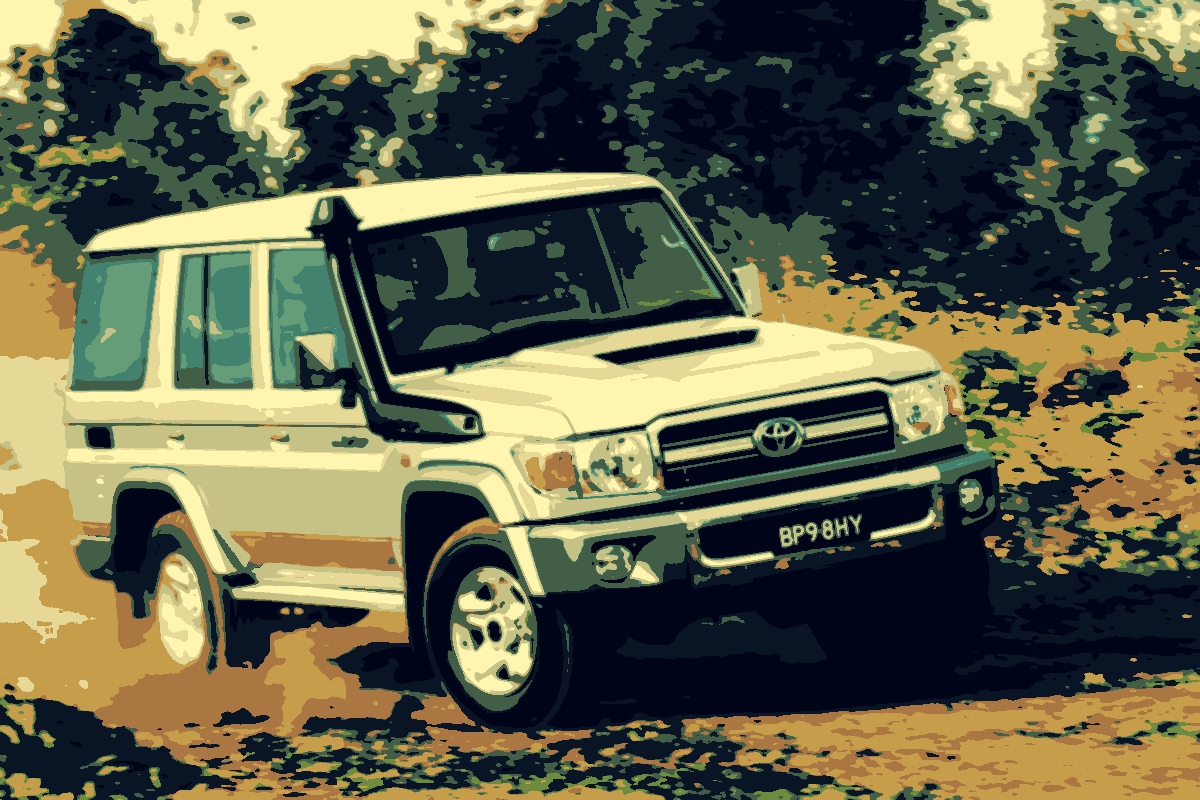 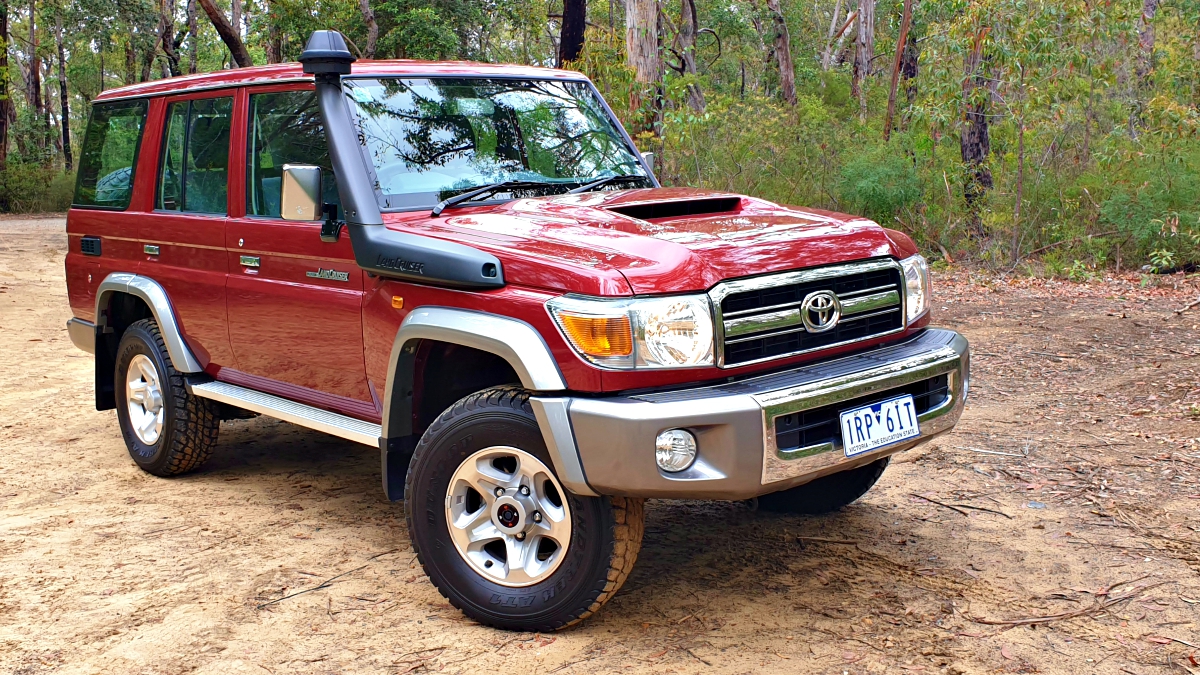 Some say that dinosaurs don’t exist.

We beg to differ. Toyota’s LC 76 LandCruiser  is an example of a living dinosaur in the scope of the automotive landscape, as it has remained virtually unchanged since it was first released in 1984.

There are three body styles currently available, with a ute, the Troop carrier, and the wagon tested. 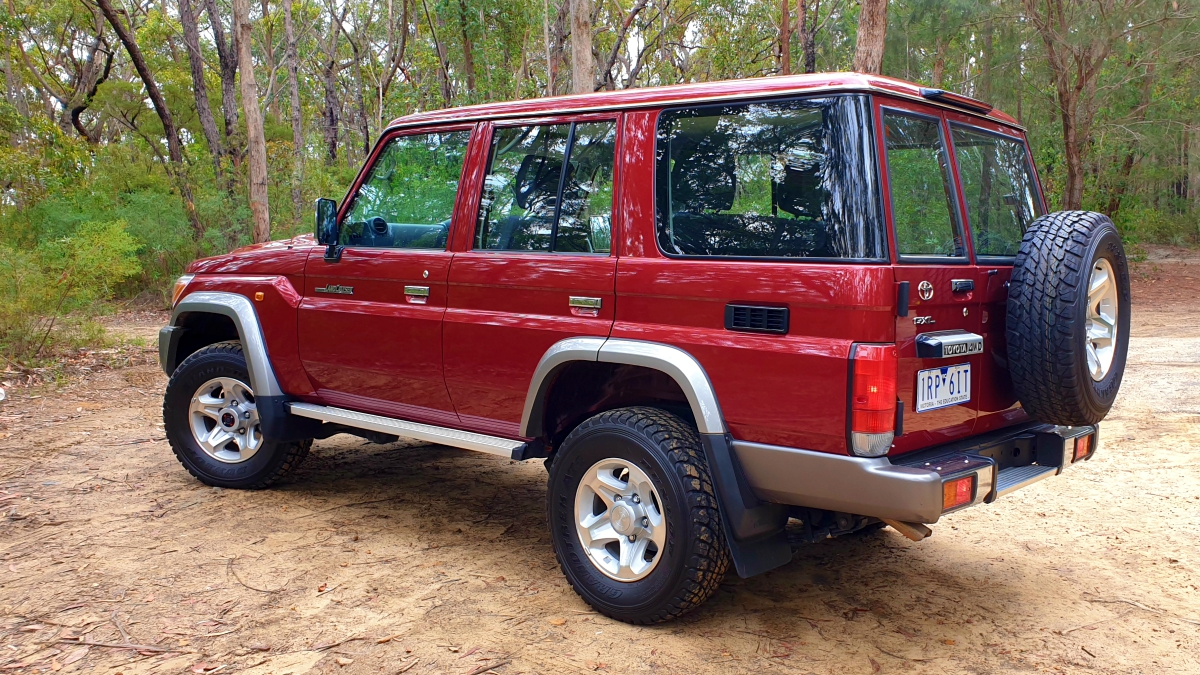 What you get is a bare-arsed interior with slide controls for the air-conditioning, a rocker tab for the electric aerial, a genuine cigarette lighter, and ashtrays for the rear doors.

The steering wheel is completely control free, with only the SRS airbag logo visible.

A small stalk for cruise control is hidden behind the wheel at the five o’clock position.

There interior is finished in blue-grey, including the blocky, squared-off dash itself.

This houses a basic looking head unit, complete with auxiliary plug and CD.

A USB port is the one concession to modern tech.

Not unexpectedly, the driver’s display is pure analogue.

It’s a five-seater and the second row seats are a one piece unit.

There is a pair of push-slide levers to lift and fold.

The front seats are all adjusted mechanically, and feature neither heating nor venting as they’re both cloth and vinyl in structure.

Toyota doesn’t identify the capacity of the cargo space with those seats in their normal position, but it’s substantial.

Given the sheer physical size and dimensions of the LC76, it’s a safe bet to say something in the vicinity of 800 litres plus.

The body style is a stereotypical two-box design.

The front wheels have manually operated locking hubs; these must be turned to lock each wheel for a proper four-wheel-drive mode.

Inside is a transfer case lever and a button to lock the rear differential.

In between is a gear selector that looks around a metre in length. 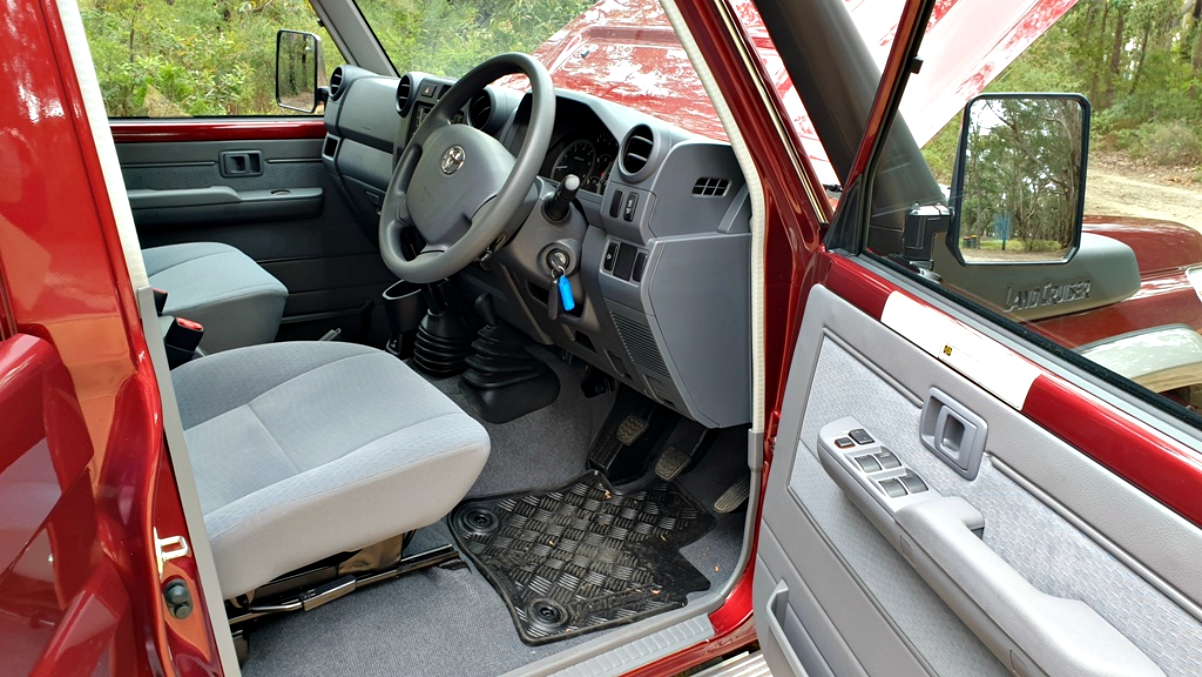 That bit of work to move applies to the engine and driveline.

The “issue” is that the first cog sees the engine running out of breath very quickly and at a maximum of 20km/h.

So careful planning is required as is a measure of courtesy when driving this dinosaur.

The selector mechanism is old school too, with synchronization between hand and clutch a definite requirement.

It’s a heavy machine, at just under 2300kg before fuel etc.

Even with 430Nm of torque, it’s by no means a rapid machine.

The engine is quiet and refined though, and breathes in and out through a snorkel with the intake up near the driver’s right ear.

We say out as on the change of gear there’s a definite sense of exhalation, almost in relief, that’s audible.

Steering is leaden, lumpen, heavy . . . you get the picture.

It feels like five turns on each side such is the steering ratio.

Yet, when under way, it’s a brilliant highway cruiser although a sixth cog wouldn’t go astray.

Safety wasn’t really a word when the LC76 was first released, and apart from the driver’s airbag, curtain bags, driver’s knee and front bags . . . nope.

No Autonomous Emergency Braking (AEB), Blind Spot or Cross Traffic Alerts and so on.

But for all its seemingly recalcitrant manners, it’s actually a lot of fun for those that were raised on driving a proper, basic, manual car.

It’s also a car for a certain market. 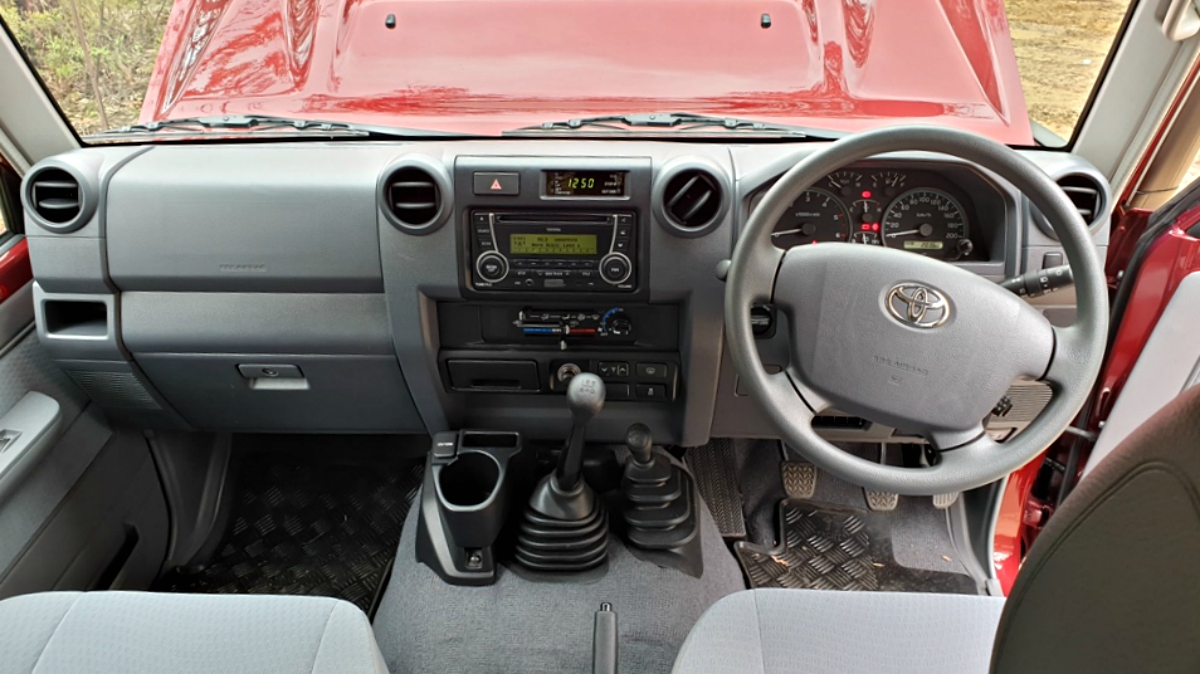 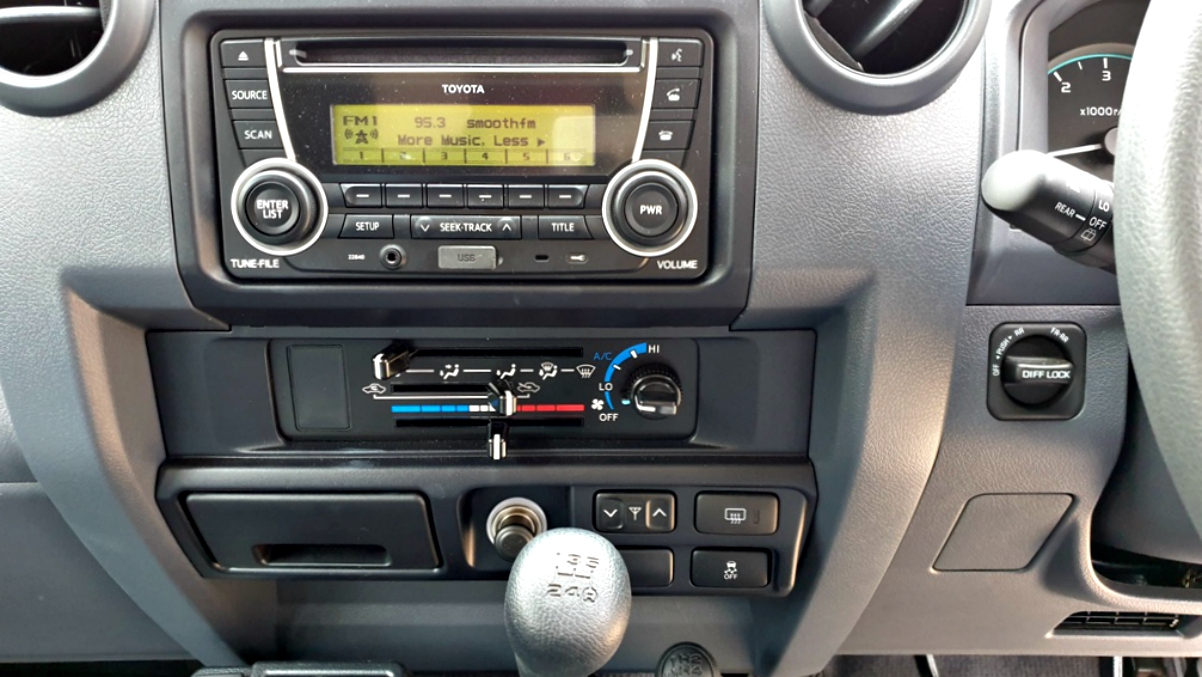 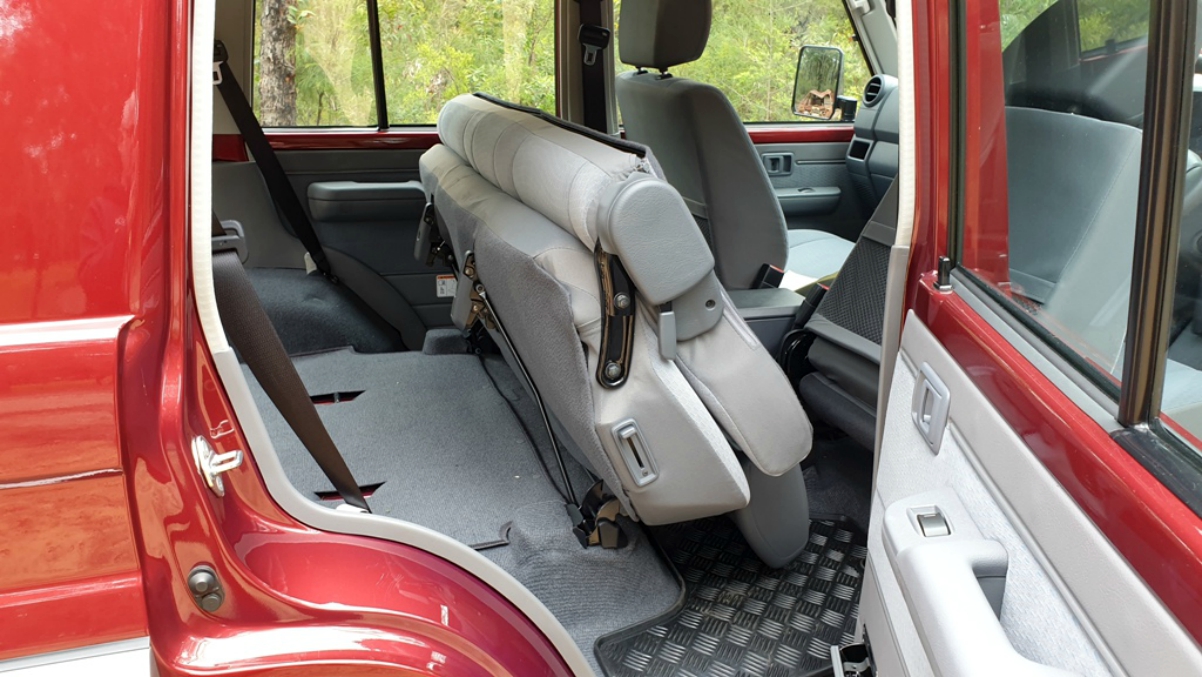 We’ve broken away a little from our normal scorecard as we felt it is necessary to point out a couple of scores are subjective.

On road it’s a lump.

Off-road and in dirty terrain, it’s a LandCruiser. Nuff said.

Looks-wise it’s imposing for some, what it is for others, and intimidating for the leftovers.

For people that “get” what driving truly means, there is plenty of appeal.

It would actually, in that sense, be perfect to teach younger drivers the true meaning of the word.

Otherwise it’s as invisible to the market as parents are to their kids at 9pm . . . We love it though. 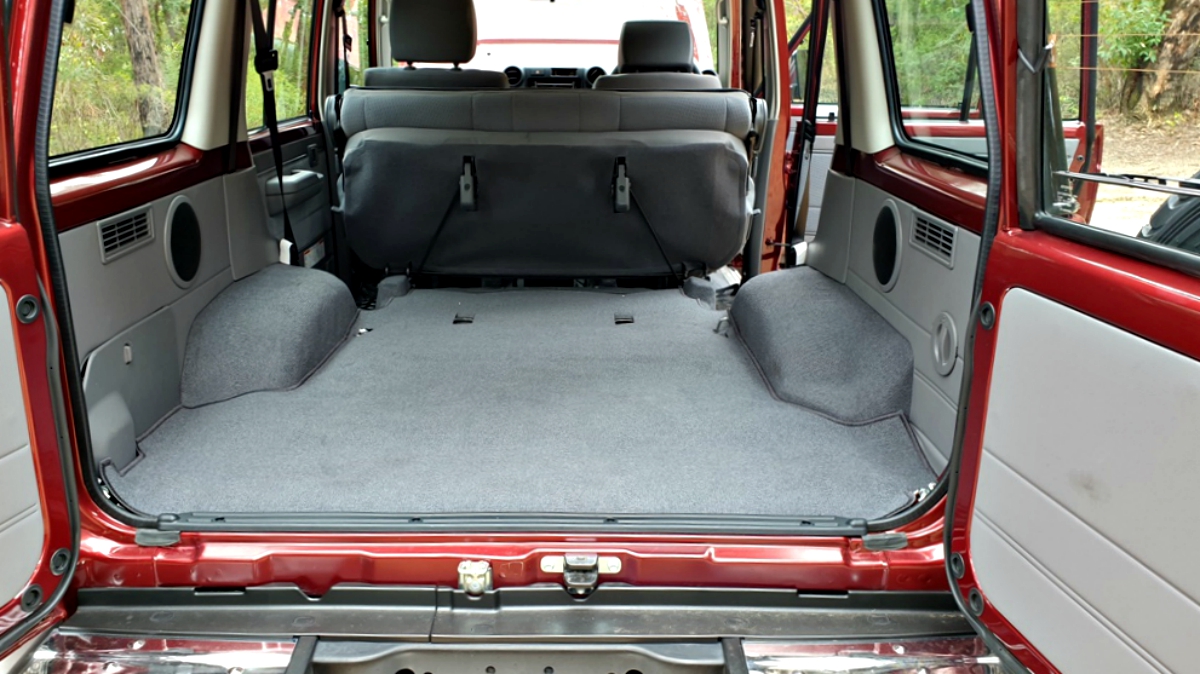