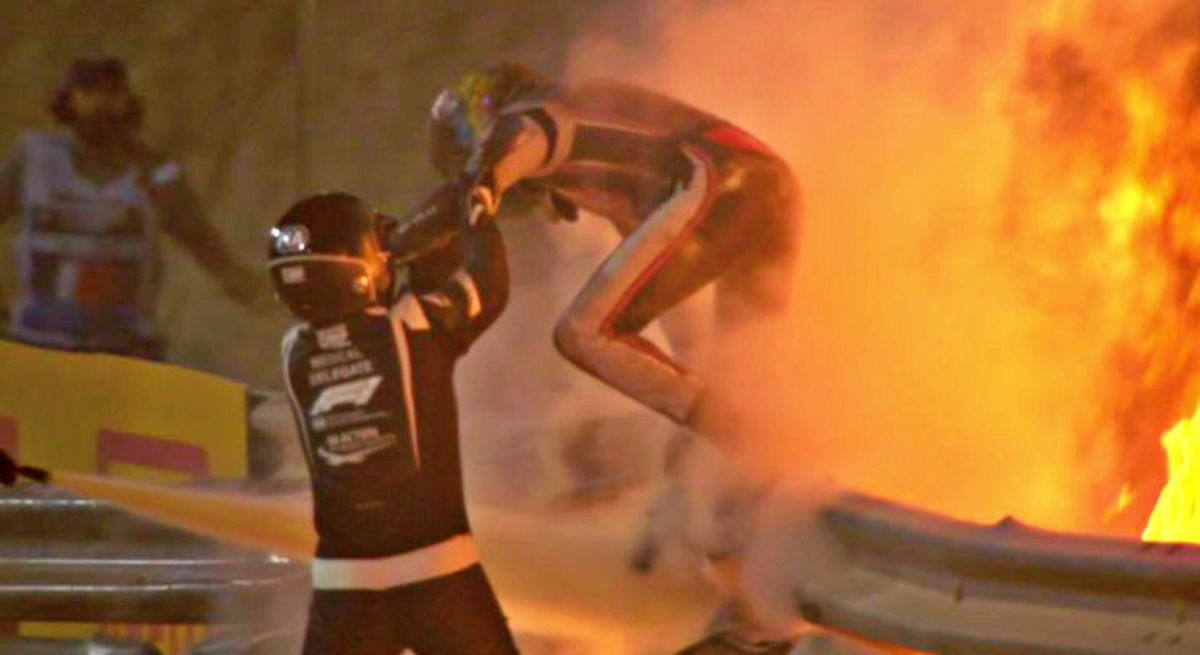 Grosjean is helped over the barrier.
Formula fun
4 min read

A GIANT fireball, just 33 seconds after the start, was the first of a series of mishaps that hit the Bahrain Grand Prix.

Haas driver Romain Grosjean had a miraculous escape from the inferno, which happened at Turn 3 after his car was tagged by the Alpha Tauri of Daniil Kvyat.

But it was not the only drama.

In other incidents, the Racing Point of Lance Stroll ended upside down, also after a brush with Kvyat, and another fire stopped Racing Point teammate Sergio Perez three laps from the end — after the Mexican seemed certain of claiming third place.

After two red flags, a long delay while the barrier destroyed in the Grosjean crash was replaced, the chaotic race over 57 laps of the 5.4km circuit ended with Lewis Hamilton in the Mercedes taking the honours from the Red Bull pair of Max Verstappen and Alex Albon.

The Frenchman’s Haas was torn in half by the first lap impact, with its full fuel tank igniting and the nose of the car piercing the barrier.

Grosjean somehow got himself out of the fiercely burning wreckage, leapt over the barrier and landed straight into the arms of the track doctor who was following the pack on the opening lap.

He was taken to hospital and treated for minor burns and broken ribs.

The race restarted with Hamilton on pole again ahead of Verstappen and Perez, with Bottas fourth.

But it was suspended again when Stroll and Kvyat came together at the Turn 8 hairpin, with Stroll’s car flipping.

Behind, Sebastien Vettel braked hard to avoid the upside down Racing Point, and was hit from behind by  Kevin Magnussen’s Haas.

After the restart on lap nine, Hamilton and Verstappen led from Perez, Albon and the McLarens of Lando Norris and Carlos Sainz.

Next came Pierre Gasly in the Alpha Tauri while Daniel Ricciardo and Esteban Ocon spent some time scrapping for seventh.

Then, the order changed once more and the safety car came out again, after Perez’ car erupted in flames.

So Albon inherited third place, thanks to the hapless Perez, who had again put in a sterling drive, with Norris and Sainz moving up to fourth and fifth for McLaren.

Sixth was Gasly, Daniel Ricciardo took seventh, Valtteri Bottas had two punctures in his nightmare race to finish eighth for Mercedes, just ahead of Ocon’s Renault while Charles Leclerc took the final championship point for Ferrari.

Ricciardo, like most of the other drivers, was amazed by Grosjean’s escape from the inferno on the opening lap.

“To see him escape and walk away was a relief and I wish him the best in his recovery. That’s the main thing from today.

“In terms of our race, it certainly wasn’t what we wanted but we gave it our best and we still managed to score points.

“We’ll focus on next week when it comes, it’s still to play for in the championship and we’ll come back stronger.”

Next week’s race is the is the Sakhir GP, under the floodlights on the 3.5km Outer circuit at the same venue in Bahrain.

It’s just 200m longer than Monaco, which is the shortest circuit on the calendar.

Note – Verstappen scored an additional point for setting the fastest lap of the race.