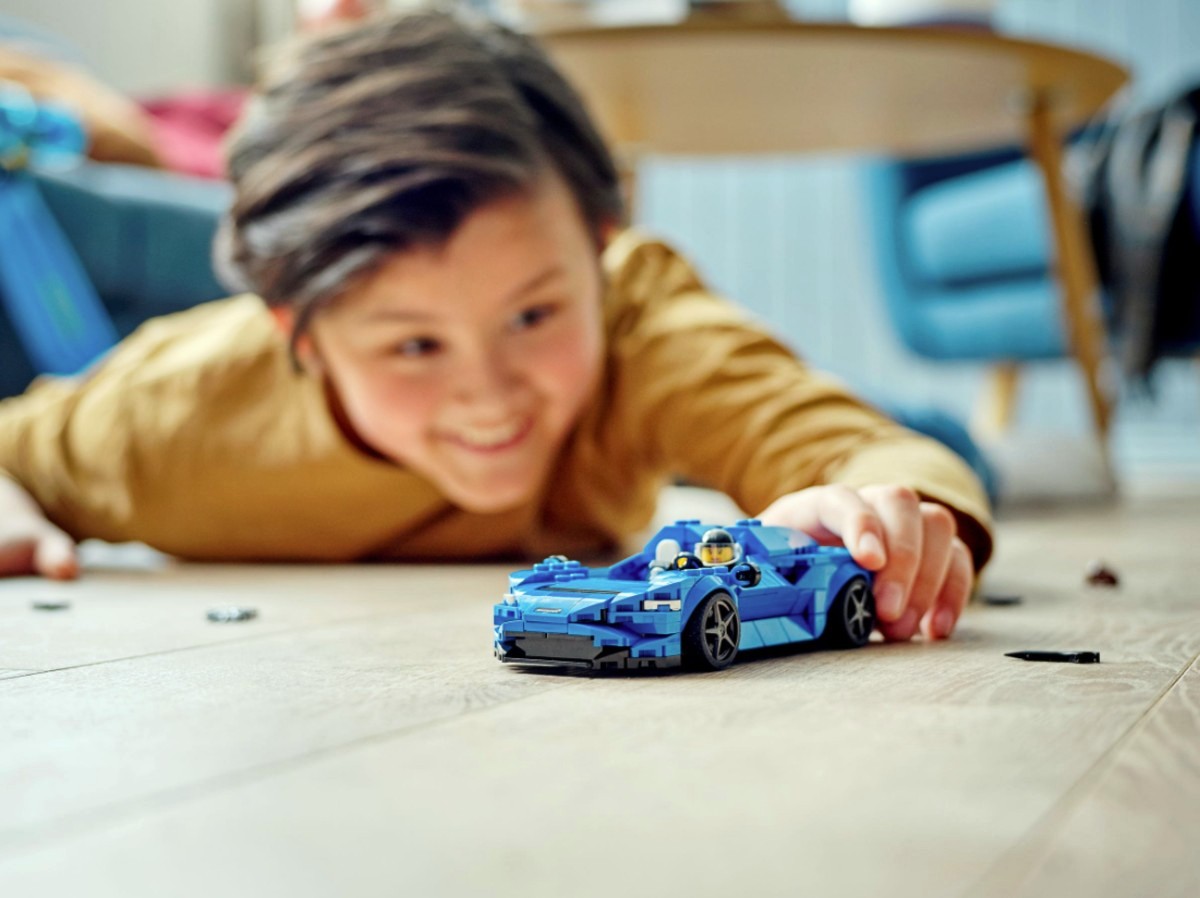 Home
Toy stories
Stretch your legs in the Lego Elva

IF your budget doesn’t quite stretch to the $2.6 million needed for a McLaren Elva, how about a slightly smaller one for $30?

Claimed to be ‘just like the real thing,’ the 263-piece Lego set comes with a wide chassis, incorporating the two-seat open cockpit, and authentic detailing including the AAMS vents that make the Elva unique.

“This thrilling new set gives children and car enthusiasts alike the chance to collect, build and explore one of the world’s most exclusive open top speedsters,” Lego says.

“Designed for unparalleled driver engagement and ultimate driving enjoyment, the McLaren Elva has no roof, windscreen or windows, making for an unforgettable driving experience.” (but that refers to the $2.6m one).

The Lego Speed Champions McLaren Elva measures 4cm high, 16cm long and 7cm wide, so all you need is to get your mind in miniature mode and pretend you’re a tiny version of someone like Lando Norris or Daniel Ricciardo.

“Stunning from every angle, the detailed replica delivers an exciting building experience, perfect for display or super-aerodynamic driving action,” the Lego chaps continue.

The kit also comes with a McLaren driver minifigure, complete with race suit, helmet and wrench, inspired by none other than Rachel Brown, McLaren Automotive’s principal development engineer for Lego’s Ultimate Series.

Her role follows McLaren Ultimate Series models, including the Elva, all the way from concept to production and managing elements such as track and aerodynamic wind tunnel testing.

“It is amazing to have witnessed the Elva go from a boundary-pushing concept drawing all the way to final vehicle production,” Rachel said.

“It feels even more special now to see all of that hard work transformed into the  Speed Champions Elva model for us to share with children and fans across the world.

“Ever since I was a child I have dreamed of driving and testing cars and I still can’t believe that it’s a part of my job.

“I hope that it inspires other young people to follow their passions and pursue careers in the automotive or design and engineering industries.

“There are so many incredible opportunities.’’

Fans aged from seven can explore the make-up of the real-life Elva as they build, before showing it off or putting it to the test against other toy cars from the Speed Champions range.

The 263-piece playset makes a great any-occasion gift for boys and girls aged 7 and up and for car enthusiasts aged to 103.

And it’s so far ahead of its time: In this age of electric vehicles, the Lego does not require any batteries!

The car is powered entirely by your (or your child’s)  imagination – so the racing action never stops!

The kit includes easy-to-follow, step-by-step building instructions so kids and even  grown-ups can build at their leisure.

And be assured, that despite not having been crash-tested by Ancap, these models have been thoroughly tested to ensure every playset meets strict safety standards.