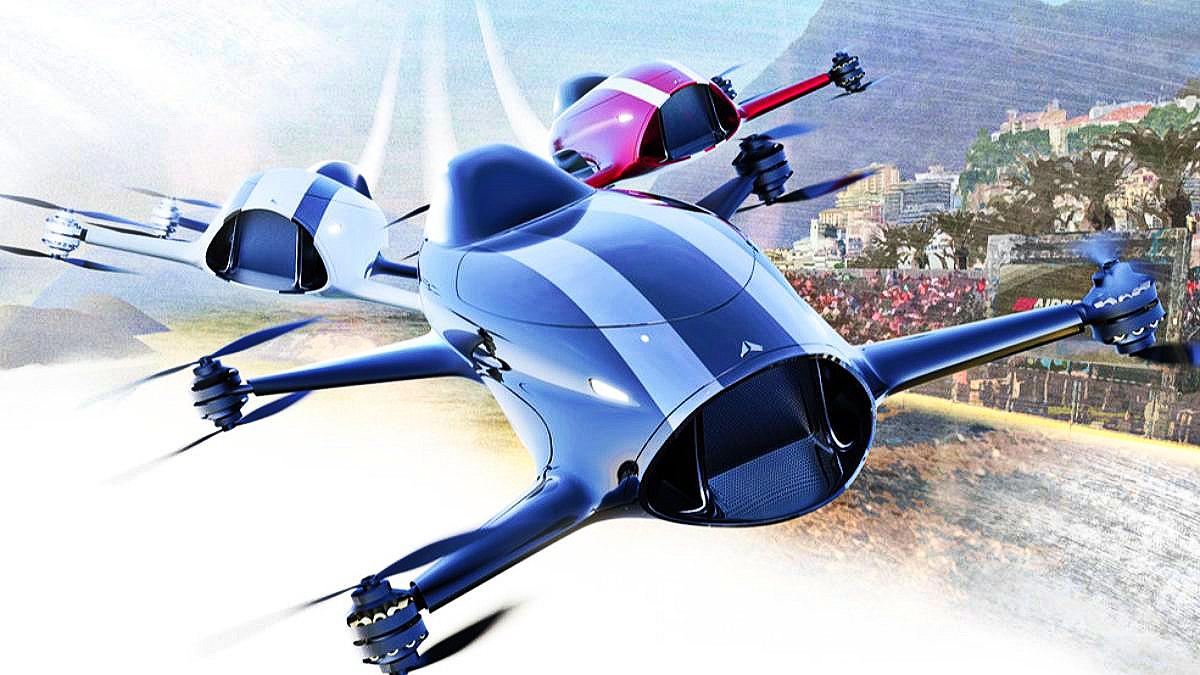 It’s going to be bigger than Formula 1.

The big difference is this racing will be conducted above the ground.

Airspeeder reckons its electric aircraft is now fully functional and ready to fly, with plans to start racing this year.

At this stage, however, the aircraft will be operated remotely — there won’t be a pilot.

But Airspeeder is promising pilots by the second series.

The unveiling of the vehicle represents the realisation of more than three years development work to create a sport that will accelerate a new clean-air aerial mobility revolution, says Airspeeder founder Matt Pearson.

A full grid of Mk3 electric flying race-craft is currently being manufactured at Airspeeder and Alauda’s technical HQ in Adelaide, South Australia.

More than 10 identical racing vehicles will be produced and supplied to teams in 2021.

The craft is being developed and manufactured by a team drawn from leading names in aerospace, automotive and motorsport technology including; Mclaren, Babcock Aviation, Boeing, Jaguar Land Rover, Rolls-Royce and Brabham.

Pearson said these remotely-piloted races will present to the world for the first time close-quarter flying circuit racing at speeds of more than 120km/h.

“The initial Mk3 races will provide vital information on vehicle dynamics, performance, safety and powertrain technology that will inform the final development of the manned Mk4 Airspeeder vehicle,” he said.

“Racing will play a vital role in hastening the arrival of eVTOL technologies which promise to revolutionise urban passenger mobility, logistics and even remote medical transport.”

Both the remotely piloted Mk3 program and manned Airspeeder Mk4 flying cars will provide a safe environment from where key innovations around safety, noise and batteries can be refined and fed into the wider development of an industry predicted by Morgan Stanley to be worth $1.5 trillion by 2050.

The Airspeeder Mk3 represents a giant technical leap forward in the development of the world’s first racing series for electric flying cars.

This remotely-piloted vehicle is the final iteration of an electric flying racing car before the introduction of manned racing craft, the Airspeeder Mk4, due to debut in 2022.

The craft, which will be operated by an expert remote operator from the ground, features a suite of technologies and engineering elements never before seen on an eVTOL craft.

These innovations will be validated in this key unmanned proving phase and include LiDAR and Radar collision avoidance systems that create a ‘virtual forcefield’ around the craft to ensure close but ultimately safe racing.

The Mk3 features a carbon fibre frame and fuselage chosen for its strength, stiffness and lightweight properties, which ensures maneuverability, performance and efficiency.

The carbon fibre frame and fuselage adds a vital mechanical layer of safety, which will be further enhanced by a full carbon fibre monocoque body to be introduced on the Mk4 vehicle.

The MK3 powertrain represents a significant upgrade on the Mk2 proof of concept vehicle, with power increased by 95 per cent with only a 50 per cent increase in weight.

A 96kW electric powertrain already sees the Mk3 operating with a thrust to weight ratio above two, on a craft that weighs just 100kg unmanned.

The Mk3 speeders will fly at speeds in excess of 120 km\h.

The Mk3 speeders are laid-out in an ‘octocopter X formation’.

Pearson said this provides significant advantages to pilots in terms of maneuverability and stability.

“When racing the pilot will be able to make the same sharp hairpin style turns as a Formula 1 car but with the added third dimension of being able to move vertically,” he said.

“The octocopter configuration also adds an important measure of vehicle redundancy and will ensure the craft can safely land and remain in control should a rotor or battery system fail.”

To facilitate this, Alauda’s engineers have developed an innovative ‘slide and lock’ system for the rapid removal and replacement of batteries when on the ground, this technology debuts on the Mk3.

A strategic layer is added to the sport with this approach as teams will be able to adapt battery strategy depending on the dynamic requirements of that particular section of the race.

Pearson said Airspeeder is built on the philosophy that nothing accelerates technical progress like sporting competition.

“The next generation sport plays the same role the pioneers of Formula One did nearly a century ago in driving technical development and building public acceptance for a new mobility revolution,” he said.