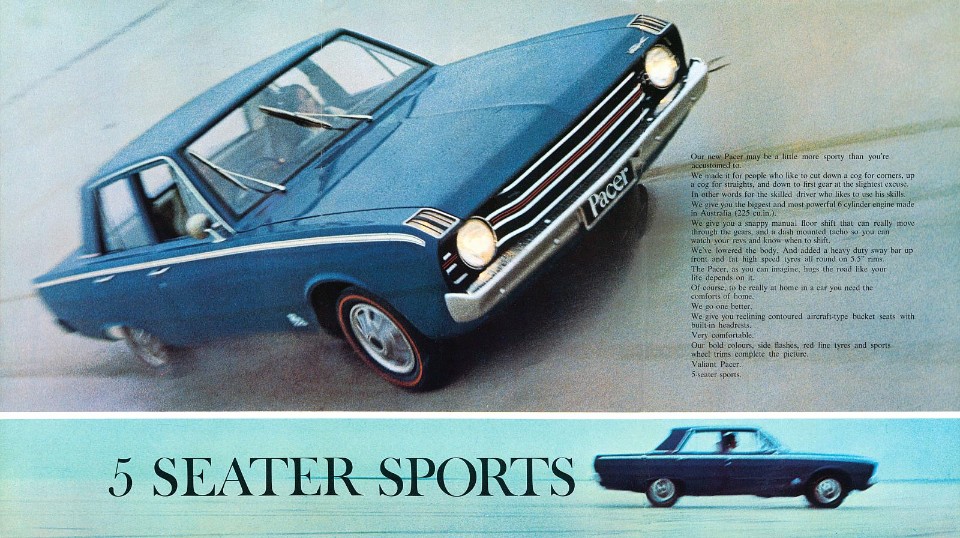 Can it really be 50 years since Chrysler Australia launched its budget-priced muscle car, the VF Valiant Pacer?

Well, yes, it is, and Pacer remains one of this country’s most revered local classics.

Back in the late 1960s when Ford released its GT Falcon and Holden its svelte Monaro coupe, Chrysler found itself without a comparable muscle car to offer rev heads, both young and old.

Plus, at the always cash-strapped Chrysler, resources to develop such a car were not available.

But what the company had was a big parts bin and the ability to create cars on a tight budget.

So what they did was this.

They grabbed a load of base level VF Valiants, the spartan ones they sold to taxi fleets.

They bolted tombstone style bucket seats to the floor, glued a tachometer to the top of the dash board and used distinctive black on white instruments.

A hole was cut in the transmission tunnel so a floor-mounted lever could be attached to the standard three-speed manual gearbox.

Then they painted the cars in either red, blue and yellow, added full length body stripes and sprayed the grille red and black.

To keep costs to an absolute minimum they decided not to offer a V8.

Power came from a high performance version of the trusty 225 cu in six cylinder engine, pumping out 175bhp (130kW).

The brakes were drums all round, but most folks ordered it with front discs.

And to ensure everyone knew what you had bought they affixed huge PACER 225 decals to the front fenders and boot lid.

An Australian automotive legend, and the performance bargain of the decade, was created.

Launched in March 1969 alongside of the VF Valiant range and at the same time as the HT Holden, the Pacer attracted significant attention.

It also had the effect of blunting Holden’s publicity effort to showcase its new small 253 cu in V8.

If you lusted after a sports coupe, like the Monaro, but had to have four doors, the Pacer was your car.

It caused enough concern at Holden that they seriously considered matching it with a HT sedan they intended to call the “SS.”

Ford actually did match the concept, with their GS option pack for their XW Falcon.

If you have a VF Pacer in your garage today, you are a lucky person.

CHECKOUT: Simple ideas the best ones