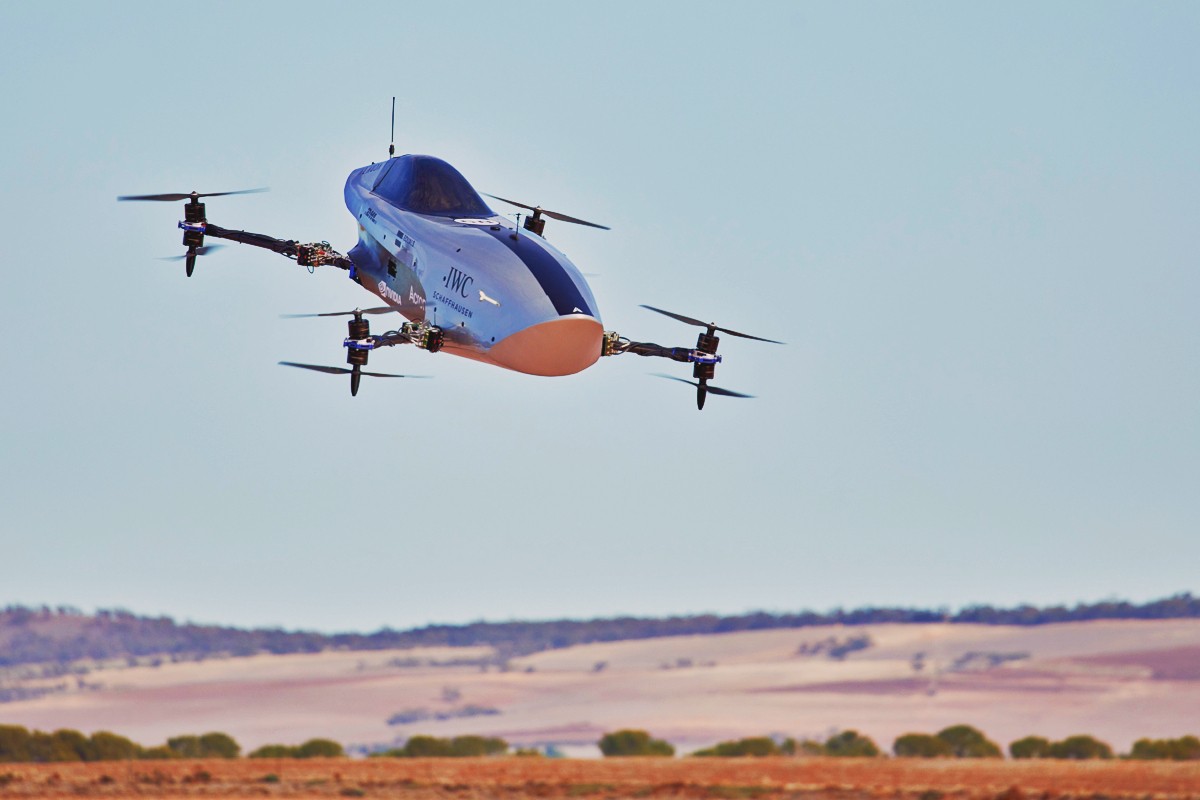 Home
Charging ahead
Rockets, A-bombs and look — a flying car

The remotely-piloted The Alauda Airspeeder Mk3, designed, engineered and built by Alauda Aeronautics for Airspeeder, looks like an oversized drone.

But there’s much more to it than that, with plans to put a pilot in the driver’s seat and a fleet of cars in the sky, as part of an exciting new race series.

Historic first flights have taken place at undisclosed test locations in the South Australian desert under the observation of the Civil Aviation Safety Authority (CASA).

Throughout the development process, the Alauda team has worked with the regulator to ensure compliance to all required procedures.

The successful flights mean that uncrewed electric flying car Grands Prix will take place this year at three, as yet undisclosed international locations.

The Alauda Airspeeder Mk3 draws inspiration for its design from classic racing cars of the 1950s and ’60s.

Head of Design, Felix Pierron’s vision melds F1 car dynamics with the profile of a fighter jet and function of helicopter.

The result is a performance eVTOL machine that promises to enthuse audiences across the globe with its limitless potential.

At maximum power, the craft delivers 320kW of power, equal to an Audi SQ7.

It can lift a weight of more than 80kg, proving the viability of the powertrain for piloted races.

It can also turn with extraordinary speed when compared to a traditional fixed wing aircraft or helicopter.

The Mk3 vehicle has a thrust-to-weight ratio of 3.5, which exceeds that of an F-15E Strike Eagle — one of the most advanced fighter aircraft in the world.

The rapid hairpin turning potential achieved through an octocopter format has been compared to that of a Formula 1 car, generating up to 5Gs, with the added capability of being able to manoeuvre vertically.

The Alauda Airspeeder Mk3 has now entered production, at Alauda’s technical headquarters in Adelaide — with 10 in build ready for the teams that will take place in the EXA Series races.

The EXA series will feature up to four teams with two remote pilots per team, and will compete in  three individual events across the globe through 2021.

They will race ‘blade-to-blade’ over locations inaccessible to traditional motorsport.

A pre-season will soon be announced and will take the form of an internal drag-race style competition between two distinct ‘works teams’ drawn from within Alauda.

Elite pilots will be drawn from aviation, motorsport and eSports backgrounds to remotely pilot the world’s only racing electric vertical take-off and landing (eVTOL) craft.

These pilots will remotely control their Speeders in races across electronically governed, augmented reality-enabled sky-tracks.

Each Alauda Aeronautics Mk3 will be built to identical specifications, so pilot skill and team strategy will determine race winners.

Physical tele-robotic avatars named The Aviators, designed to represent the frame of human pilots, will occupy the cockpit.

This will provide engineers with critical data and information on the effects of high speed racing, rapid turning, acceleration and deceleration on the human frame.

This will accelerate Airspeeder’s progression  to human piloted races which are scheduled in 2022.

To facilitate this, Alauda’s engineers have developed an innovative ‘slide and lock’ system for the swift removal and replacement of batteries on the ground.

Intense internal competition between in-house pit-crews has driven the pitstop time down to just 20 seconds, which is entirely comparable with any form of ground-based legacy motorsport.

This is expected to continue to fall. For context, a Formula 1 pitstop used to take more than a minute.

This technology, predicted by Morgan Stanley to be worth $1.5 trillion by 2040, is already finding potent applications in air logistics and remote medical care and has the potential to liberate cities from congestion though clean-air passenger applications like air taxis.

It does this by providing a place and a space to rapidly accelerate the development of the key safety, performance and dynamics technologies that will underpin the growth of eVTOL transportation.

“The world is ready for advanced air mobility and we are proud to make history by introducing the world’s first racing series for flying electric cars.

“Airspeeder and EXA represent the future of motorsport and a compelling and exhilarating showcase of the potential of electric flying cars as this generation’s defining mobility revolution.”

CHECKOUT: Sky the limit for Airspeeder