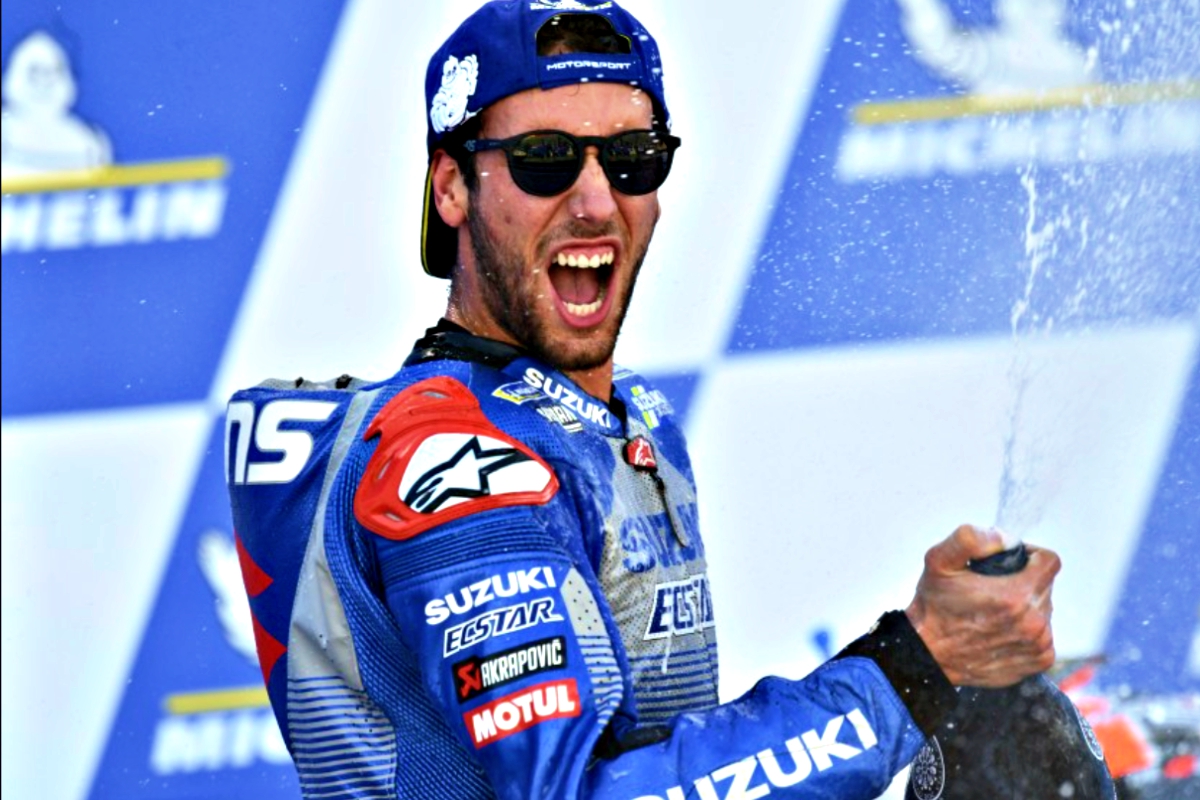 SUZUKI’S Alex Rins started the Aragon MotoGP from 10th on the grid and produced a scintillating ride, scything through the frontrunners to win the demanding race — by 0.263 of a second.

In doing so, the 24-year-old Spaniard became the 8th different winner in the 10 races held so far this season.

Only Fabio Quartararo has managed two wins, but he had a big fall from his Yamaha in practice at Aragon, and although he managed to grab pole, he had a dreadful race — steadily dropping down the order to finish a distant 18th.

This resulted in him losing his championship lead to Joan Mir who ran a close third at Aragon, behind MotoGP rookie Alex Marquez, who had another magnificent race for Honda after starting from 11th.

Marquez was arguably the star of the show in that he chalked up his second successive podium, running 2nd in the rain at Le Mans in the previous round and repeating the performance in bone-dry Spain.

He’s the younger brother of MotoGP champion Marc Marquez, who has been sidelined with a broken arm after a crash in the season opener.

However, Rins was just as impressive.

He had a great start, then picked off one rider after another and edged past the Yamaha of early leader Maverick Vinales on lap 15.

For a while it looked as if Rins and Mir might make it a 1-2 finish for Suzuki, but Marquez, his Honda squirming as its tyres struggled for grip coming out of corners, sneaked past Mir with six laps to go, and started to pressure Rins.

Vinales wasn’t far behind, taking 4th for Yamaha, just 0.2 of a second behind Mir’s  Suzuki, with Takaaki Nakagami 5th place for Honda and Yamaha’s Franco Morbidelli 6th, to maintain his top 10 finishing record this season.

Next came Andrea Dovisioso on the Ducati, leading Honda’s Cal Crutchlow – who dropped from 3rd to 11th after contact at the first corner – in 8th, while Jack Miller (Ducati) and Johann Zarco (Reale Avintia) rounded out the top 10.

The KTMs had a tough time at Aragon with Brad Binder its best representative in 11th spot, ahead of teammate Pol Espargaro, while Aprilia’s Aleix Espargaro ran 13th, and Iker Lecuona (KTM Tech3) and Danilo Petrucci (Ducati) completed the points-earning places.

No mention of Valentino Rossi?

The charismatic seven-time MotoGP world champion has tested positive for COVID-19, so he had to go into quarantine.

He’ll also have to miss next weekend’s Grand Prix of Teruel – at the same Aragon circuit.

Que? Si, two grands prix can’t have the same name, so the upcoming one is named after an airport.

Aragon itself is an autonomous territory in Spain and Alcañiz.

At 9km the closest town to the circuit, it is a fascinating and picturesque place that dates back to the 12th century and Spain’s Islamic era.

It was captured by the Christian troops of Alfonso I of Aragon in 1119, but was later taken back by the Moors before being conquered again by count Ramon Berenguer IV of Barcelona in 1157, and again lost — until it was recaptured by his son Alfonso II of Aragon.

There’s much more history of the town, but its current population is about 15,000 and nowadays it’s known for its proximity to the MotoGP circuit, designed by Herman Tilke.

Well worth a visit. But the COVID thing makes that impossible.

Next race is the Gran Premio Liqui Moly de Teruel — again at Aragon — on October 23-35.