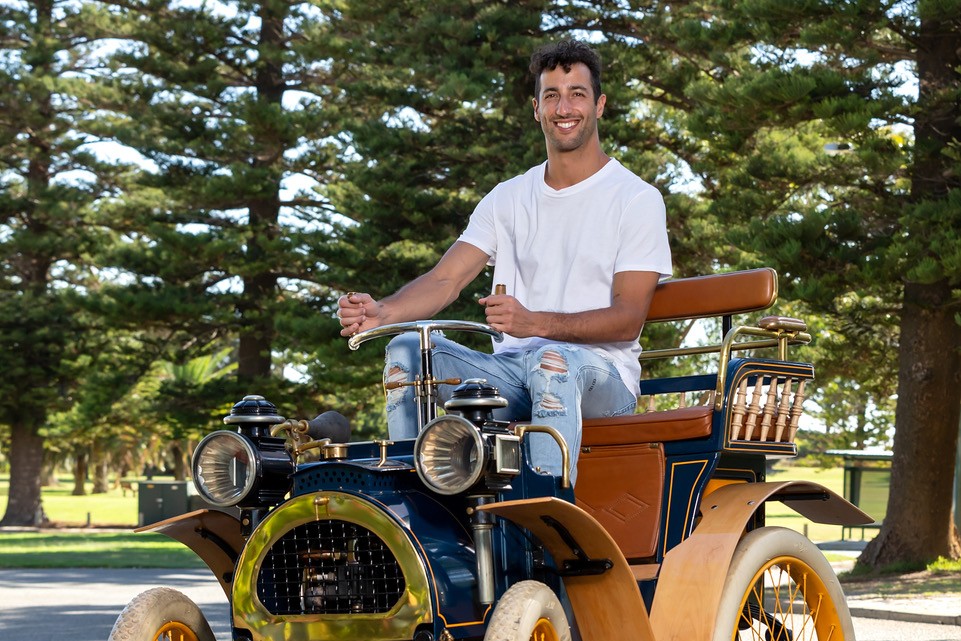 RENAULT’S illustrious F1 driver, Daniel Ricciardo, got more than he bargained for when he consented to take a look at one of the first cars built by Louis Renault 120 years ago.

He agreed to have his picture taken with the 110th Renault made, a Type A, for a photograph to be included in a book to be released in December.

When he arrived at the photo shoot in Perth, he was offered a drive in the primitive automobile.

His first reaction was: “You want me to drive that?” but he was up for the challenge and was soon being shown the controls of the 120-year-old car boasting a mere 1.75hp (1.2kW) compared with the 600hp (442kW) of his current Renault Formula 1 Team car.

He admitted after driving the oldie that it was a scary proposition using bicycle-like handlebars to steer and applying brakes which were rudimentary, at best.

The photographs and story of Ricciardo’s first drive of an early Renault feature in the new book: Louis Renault’s Amazing Type A by Australian motoring historian Graeme Cocks.

The book documents how the precocious young son of a button-maker from Paris designed his own car and made a prototype in the family’s garden shed at Billancourt in 1898.

He saw what other car designers were doing with big, heavy drivetrains and massive engines and thought he could achieve better performance with a revolutionary approach.

His design incorporated a small engine at the front of the car, with a clutch behind the engine running into a gearbox and a tailshaft driving a differential on the rear axle.

It sounds routine today but Louis Renault’s simple design was to take the motoring world by storm and he couldn’t make his little cars quickly enough.

The Type A was Louis Renault’s, and therefore Renault’s, first race car.

In 1899 he competed in a number of sporting events around Paris, winning the Paris-Trouville race.

Soon he was manufacturing a range of more powerful cars and with his brother Marcel, competing in the great city-to-city races of Europe.

The new book talks about the development of the Type A, its racing successes and the challenges faced by Louis Renault to protect his invention from other manufacturers who were keen to steal his patents.

It then looks at the restoration of a Type A owned by Perth car collector Peter Briggs and the trials and tribulations of taking such a primitive machine overseas for the London to Brighton veteran car rally.

Daniel Ricciardo features in the last chapter, completing the circle which began 120 years before in Paris when a 21-year-old Parisian was convinced that he could make a better car than anyone else.

Louis Renault’s Amazing Type A by Graeme Cocks is 208 pages, in colour and available from Motoring Past Vintage Publishing.