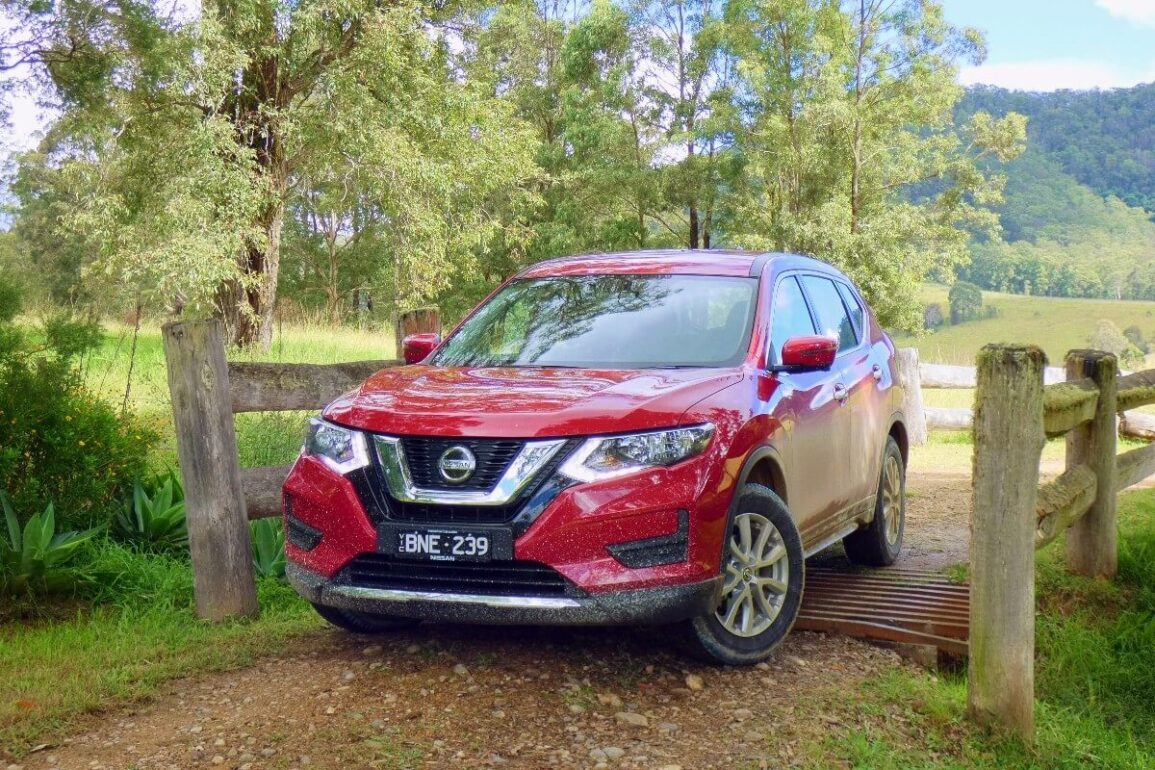 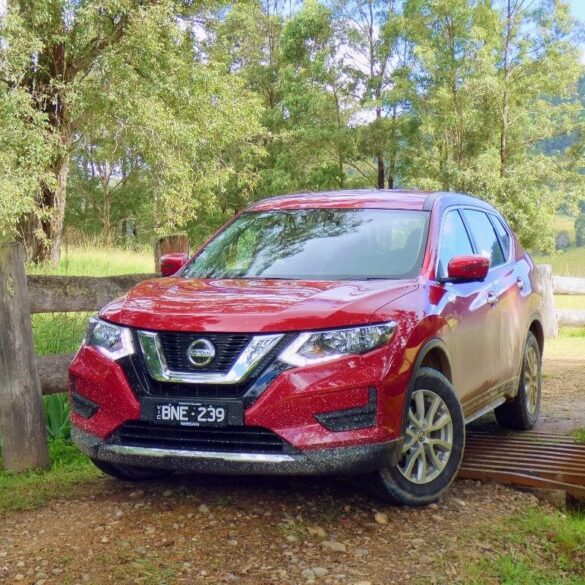 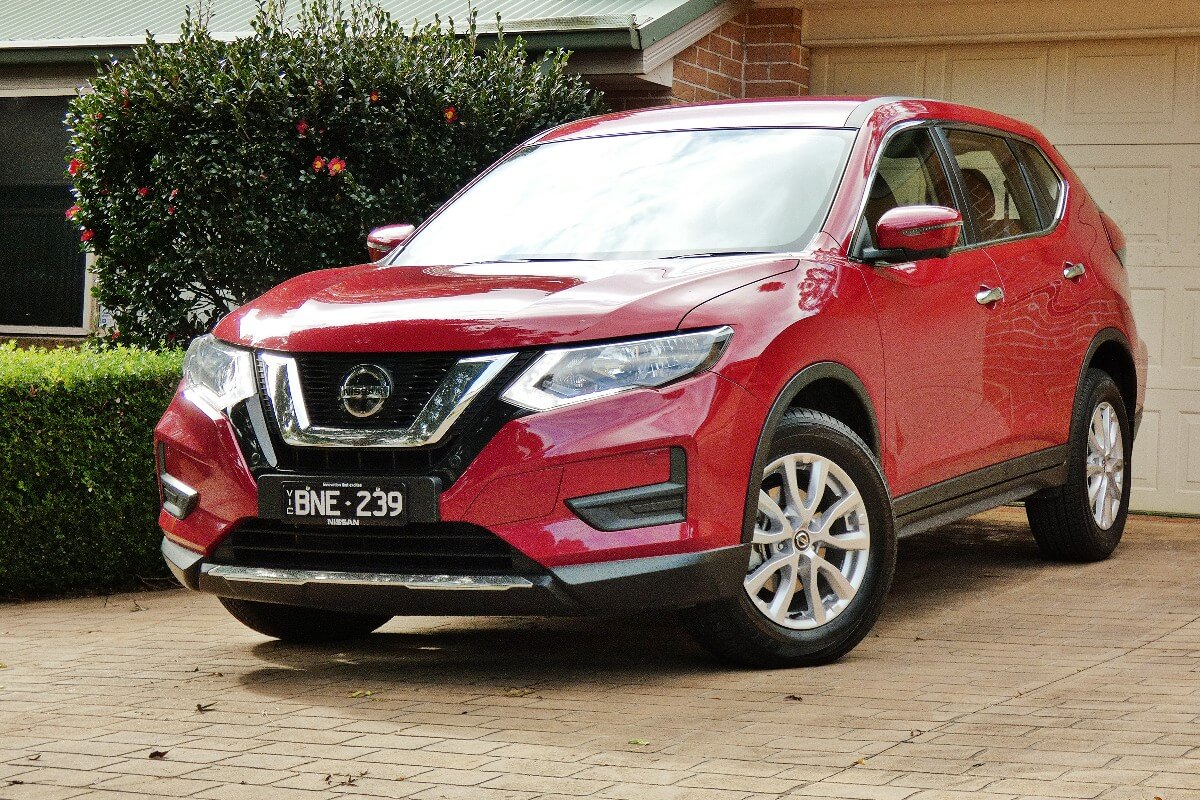 It’s been way too long since I last drove a Nissan X-Trail.

After they introduced the CVT transmission, I kinda lost interest.

But somewhere along the way, I’m happy to say, the X-Trail got its mojo back — the latest one ain’t half bad.

And, with an all-new model about to lob, my timing was perfect because now I can’t wait to see where they’ve gone with it. 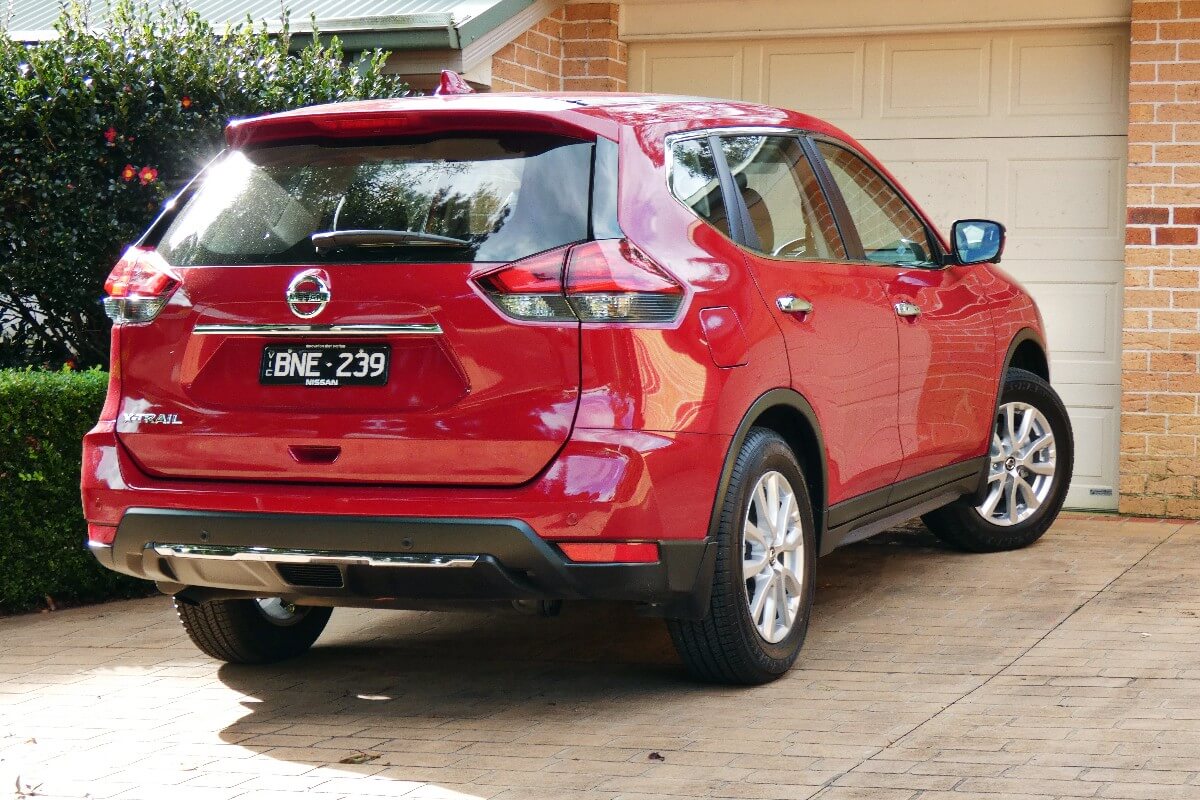 The flexible seating system is also part of the deal, with a second-row that split folds 40:20:40 as well as sliding and reclining, along with a flexible cargo system in the five-seater.

The safety story is a strong one, with a five-star rating, but sadly the entire suite of assistance systems is not standard across the range.

Moving further up the food chain brings Blind Spot Warning and Rear Cross Traffic Alert, but it’s not until you get to the top of the line Ti that it’s all there — Lane Departure Warning, Lane Departure Prevention, AEB with pedestrian detection, Intelligent Cruise Control and High Beam Assist.

Child restraint includes left and right ISOFIX and top tethers plus a tether for the centre position.

You want all-wheel drive, it’s nother $2000 — but quite frankly we wouldn’t bother. 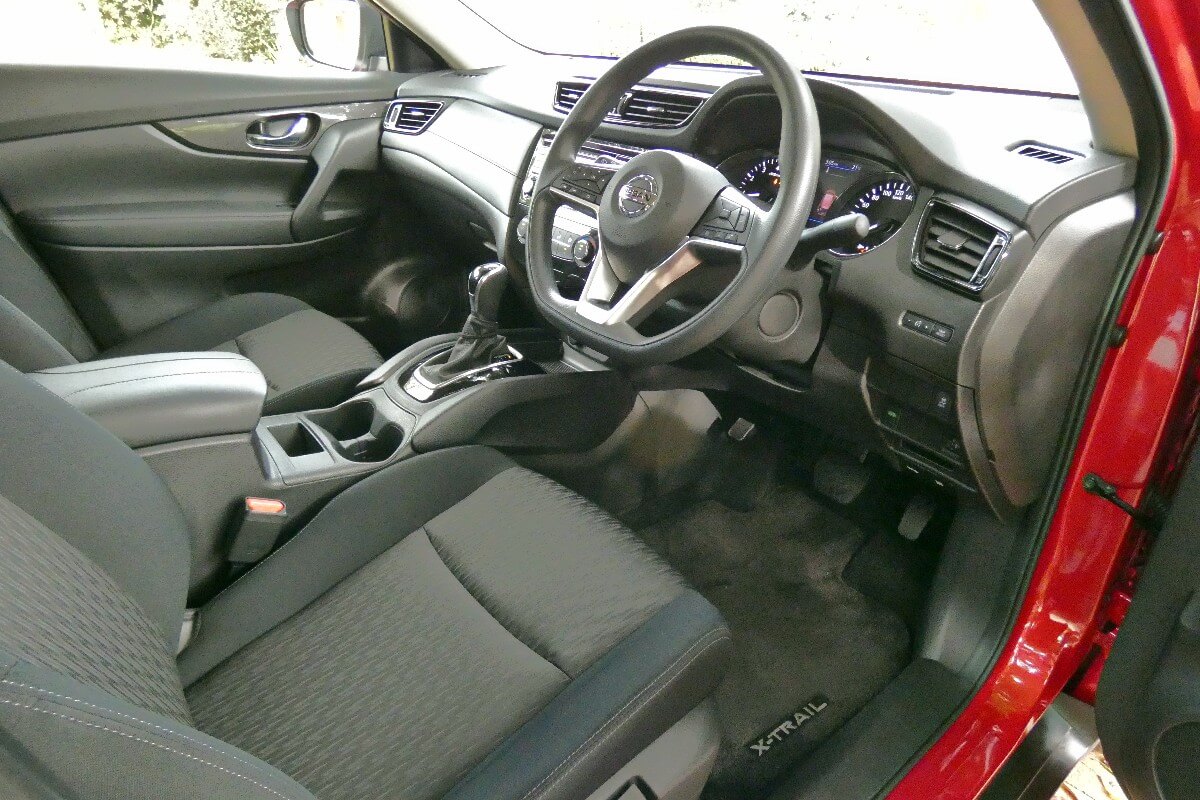 ST with manual transmission gets a 2.0-litre petrol engine, with 106kW and 200Nm.

The rest of the range is equipped with a more powerful 2.5-litre petrol engine that puts out 126kW of power and 233Nm of torque, the latter from 4400 revs.

The 2.5, paired with Nissan’s Xtronic CVT with manual mode (MCVT), offers a useful combo of economy and performance, with claimed fuel consumption of 7.9L/100km.

Nissan pioneered CVTs, estimating that if the world switched to this kind of transmission, it would provide a 10 per cent saving in fuel overnight — not to mention reduced engine emissions.

Instead of a set range of gears, CVTs operate on a continuously variable principle, designed to deliver the optimum mix of power and efficiency — in theory at least.

In practice the effect was a bit overwhelming for us oldies used to traditional transmissions, as the noise from the engine reached a crescendo, while engine revs remained oddly unmoved.

Younger drivers with no or different expectations may not have found the effect so confronting.

Thankfully, CVTs have gotten better since those early days and the latest setup in the X-Trail is for the most part quite acceptable.

As luck would have it, our time in X-Trail coincided with a trip out west over the Easter break, so we got to have a good long look at the car.

With two kids, small dog, a 40-litre car fridge and gear for a few days on the farm, I was dubious whether the whole lot was going to fit.

It was a tight squeeze, but once we had the two child seats in place, we were able to slide the second row forward which together with a false removable floor in the cargo area — provided considerably more space.

The seats are comfy, the ride is compliant and there’s rear air outlets to keep the kids from becoming car sick (but it’s manual adjust air conditioning).

All good so far, but a twitchy ride, thanks to a grabby stability system, failed to find a friend in my wife who started to feel ill (my four-year-old grandson actually threw up).

Our destination lay four hours northwest of Sydney in the Barrington Tops area of NSW, at the end of a rather remote 20km of dirt.

Although the test car was the front-wheel drive, it remained impressively stable, even on what at times was a wet and slippery road, washed out in parts from the recent rains as it threaded its way through the trees.

This automatically applies the brakes when taking off to prevent the driver from rolling backwards on an incline.

While we’re on the subject of the brakes, like the Patrol that we drove previously, X-Trail comes with a foot-operated hand brake.

Not sure what the thinking is here? It’s less of an issue once you become used to it, but why go to all this trouble in the first place.

Apart from Eco mode, the value proposition ST+ has no drive modes nor does it get gear change paddles, but you can change sequentially using the transmission lever, with six gears or steps provided.

In the context of dirt, this provides some much-needed engine braking when easing off the accelerator, lifting the level of control in slippery conditions.

Our test vehicle was fitted with smallish 17-inch wheels, with 225/65 series Yokohama Geolanders, and a space saver spare.

From past experience, we’re not huge fans of the tyres which lack some grip in the wet, but they performed well on this occasion.

They are, however, noisy on coarse chip bitumen.

Volvo XC40 Recharge: And then there were two

Inside, it’s nothing flash, but functional and starting to look a bit dated.

The steering wheel is standard vinyl, rather than leather trimmed and the small infotainment screen is embedded in the dash as was the norm five years ago.

Two simple analogue gauges and central driver info display make up the instrument cluster, with the ability to display the car’s speed digitally — but none of the latest eye candy.

The touchscreen offers a rear-view camera, but at 7.0 inches it’s a trifle small, low-res and difficult to make out at night.

Items missing from the equipment list that we missed include blindspot warnings and adaptive cruise control. 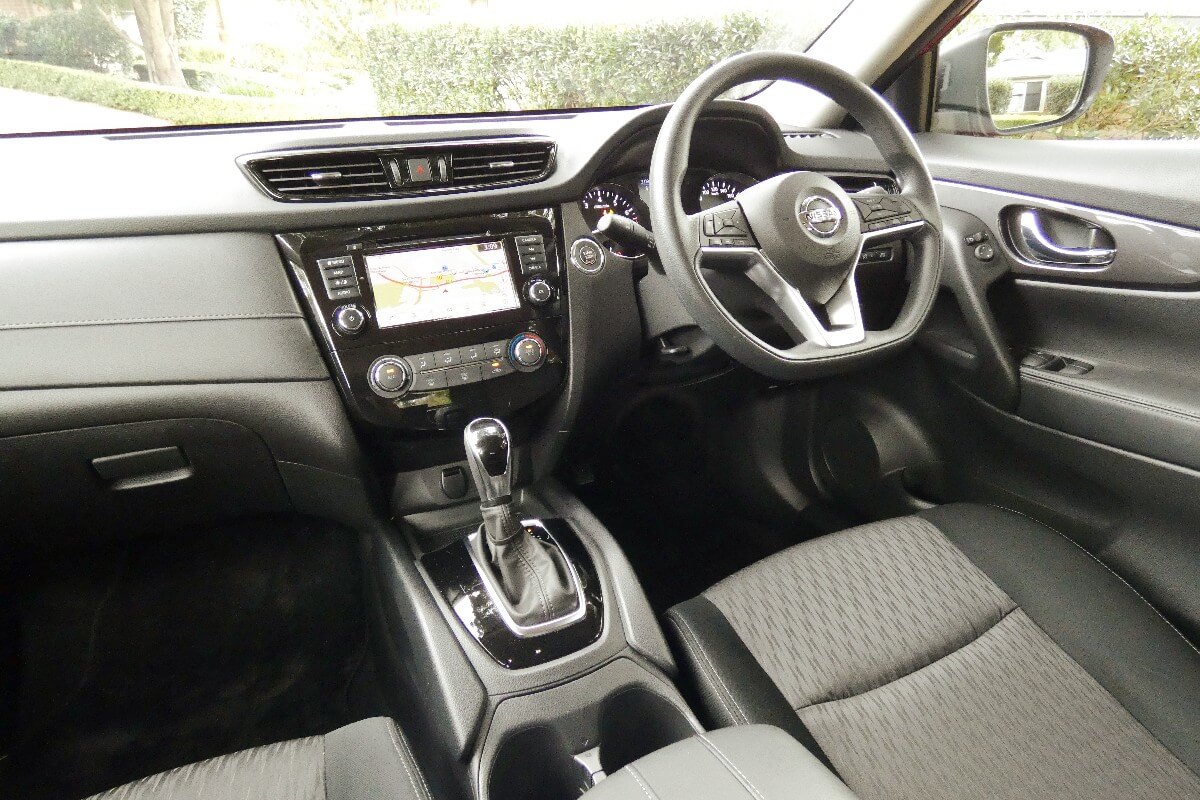 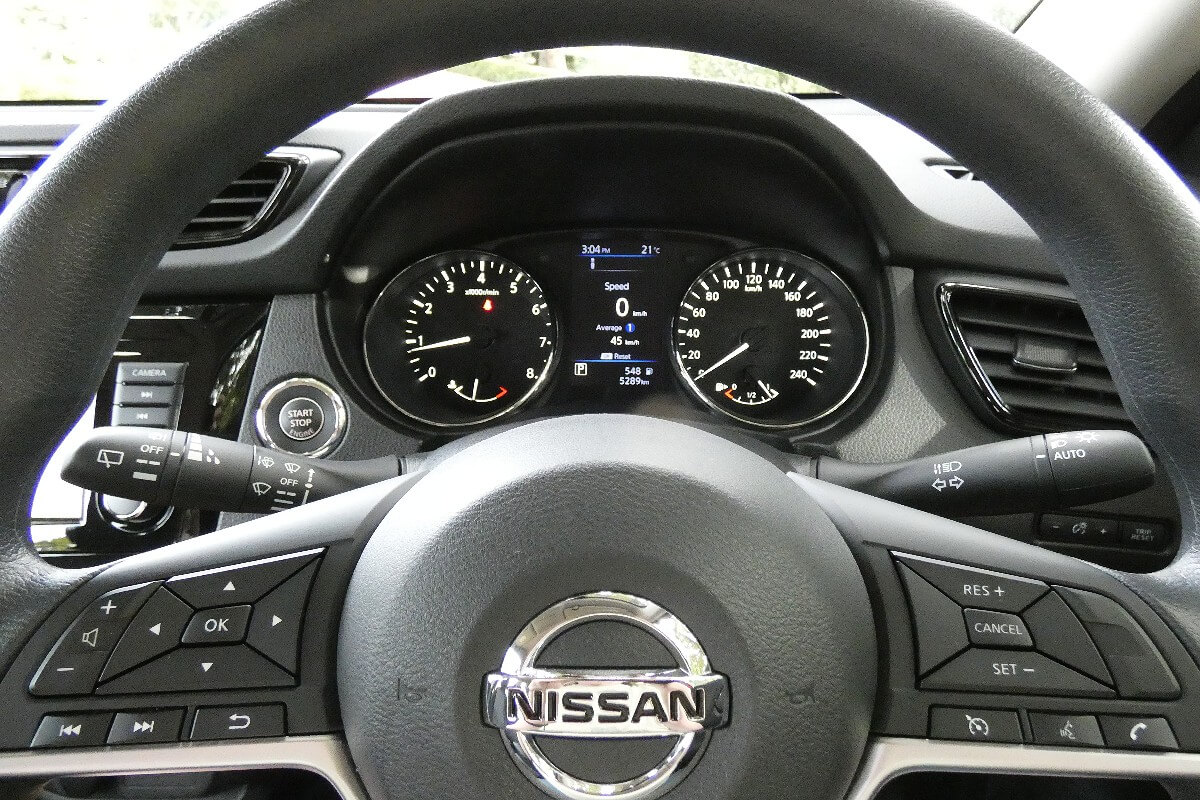 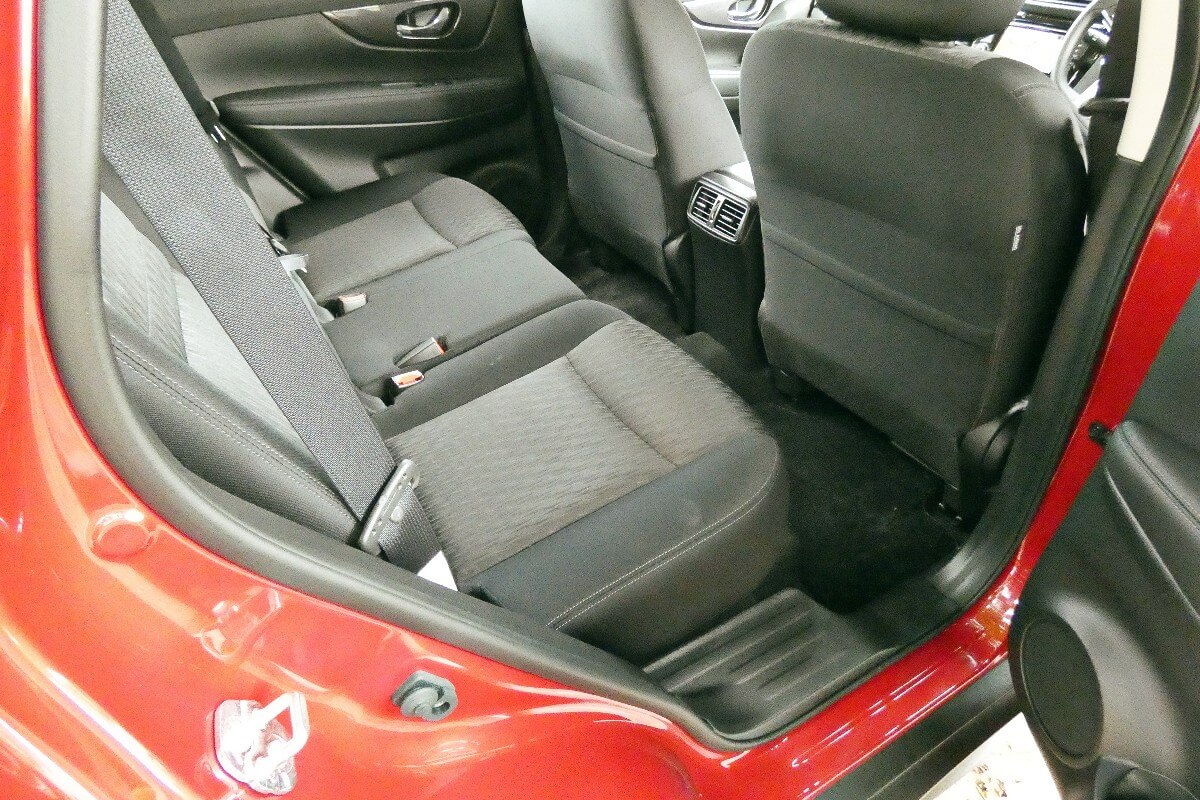 Credit where credit is due. X-Trail is a much improved motor vehicle.

The size is right, the balance of power and economy is right and the configurable cargo and second row areas are a major drawcard.

Although the fitout is starting to show its age, it remains functional and offers value for money. Let’s hope the new one when it arrives later this year addresses any shortcomings — but these things are never a given. 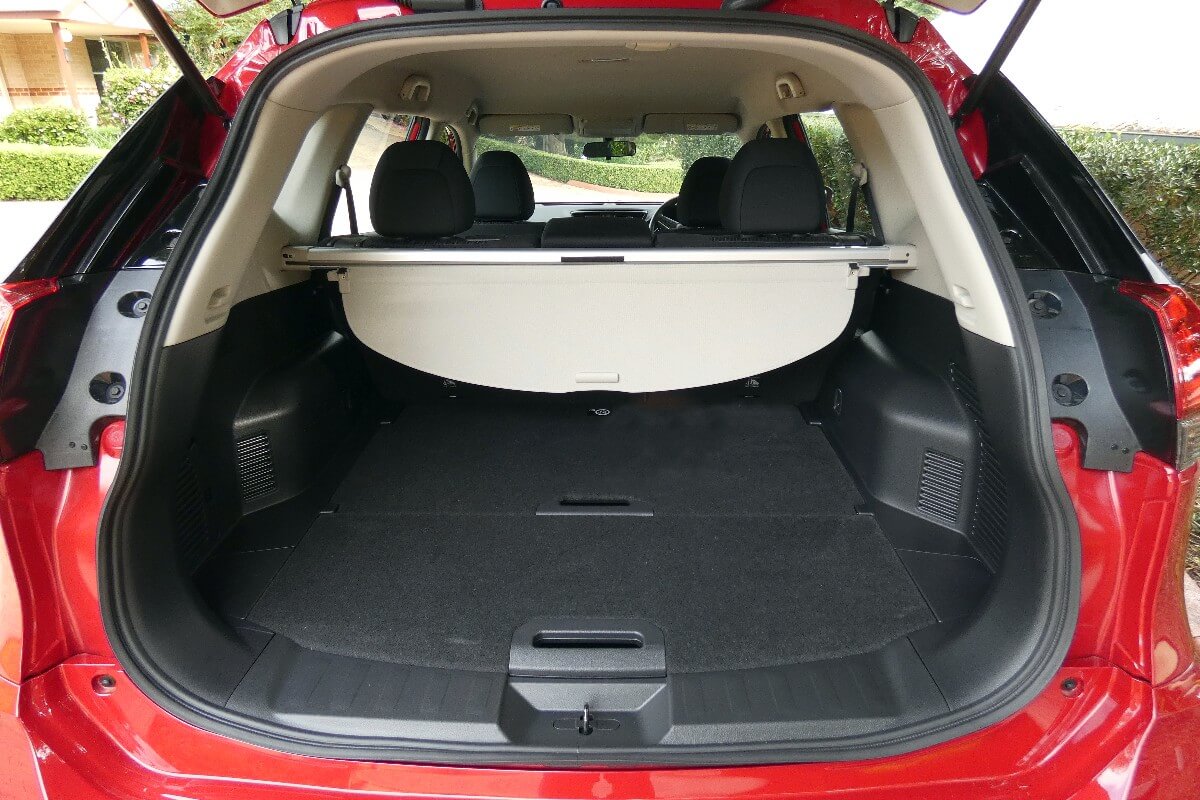 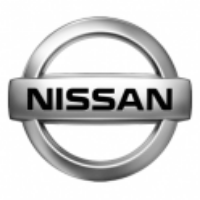