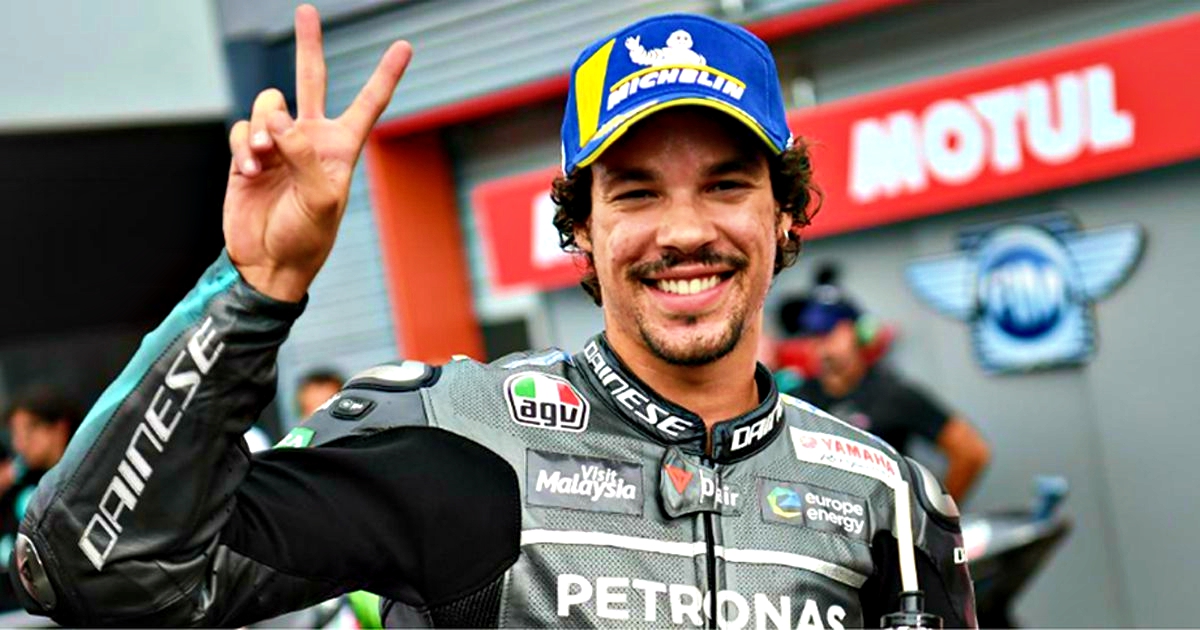 FRANCO Morbidelli became the second rider to win two MotoGPs this season, but his win in Sunday’s Teruel Grand Prix at the same circuit as the Aragon GP the previous week, worked very well for second and third-placed Alex Rins and Joan Mir.

Mir, on his Suzuki, extended his championship lead to 14 points over Yamaha’s Fabio Quartararo, while Morbidelli’s win puts him 25 points astern of Mir.

Potential front-runners Brad Binder (KTM) and Australia’s Jack Miller (Ducati) came to an early end with a crash on the opening lap.

Morbidelli’s superb run came as fellow Yamaha riders Maverick Vinales and  Quartararo struggled to seventh and eighth, while Ducati’s Andrea Dovizioso could only salvage 13th from 17th on the grid.

Takaaki Nakagami got his Honda into the lead from pole but the Japanese rider’s hopes of a dream Teruel GP were dashed at Turn 5 when he also crashed.

That put Morbidelli into the lead, followed by Rins, with Johann Zarco moving up to third on the Avintia Ducati.

Morbidelli and Rins soon broke away from Zarco, while Honda’s Alex Marquez began to move up the field, relegating a struggling Quartararo to seventh.

Marquez’s charge for a third-straight podium came to an end at Turn 2 on lap 14 when he too crashed out of fifth.

Morbidelli kept his gap to Rins steady at around half a second in the early stages and began to ease further away to eventually finish more than two seconds ahead of Rins.

It was a change from the frantic last laps of last week’s race when just fractions of a second separated the top trio.

Mir shot from 12th to fifth on the opening lap, with the Suzuki rider cutting through to third ahead of Zarco on lap 11.

Quartararo was on the same combination of tyres as team-mate Morbidelli, but finally couldn’t get close and finally crossed the line in eighth, behind Maverick Vinales, whose deficit in the championship now stands at 19.

Vinales lost out late on to Miguel Oliveira on the Tech3 KTM, who came close to grabbing fifth spot from Zarco by just 0.038s.

Oliveira ensured two KTMs made it into the top six after Pol Espargaro charged through to fourth, while Iker Lecuona aggressively seized ninth on his Tech3 RC16 to match the best result of his rookie campaign.

Danilo Petrucci completed the top 10 on the leading factory Ducati ahead of Cal Crutchlow (LCR) and Honda’s Stefan Bradl, who beat Dovizioso in the closing stages after the Italian ran wide at Turn 8 on lap 17.

Dovizioso’s struggles mean he is now 28 points behind Mir, with Rins four points further back in sixth with three rounds to go.

Tito Rabat (Avintia) and Bradley Smith took the final points, while a late mechanical drama for Aleix Espargaro – who was hounding Quartararo for eighth having passed Dovizioso for ninth on lap 17 – ruled him out.

Francesco Bagnaia compounded a miserable day for Pramac with a mechanical-induced retirement.

Only three MotoGPs remain: the Grand Prix Europe and Grand Prix Valencia on Nov 15 and 22 respectively, both at Valencia and the Portugal Grand Prix at Algarve on Nov 22.

Again, each circuit seems to favour different teams and riders.

Unlike Formula 1 racing, which is 99 per cent dominated by Mercedes-Benz’s Hamilton and Bottas, MotoGP this season has so far had 8 different winners in the 12 grands prix.

You never know who might win among the two-wheelers. And they sometimes compete in places of  interest:  The last two have been held in one of the oldest parts of Europe, near the town of  Alcaniz, which dates back to the 12th century.