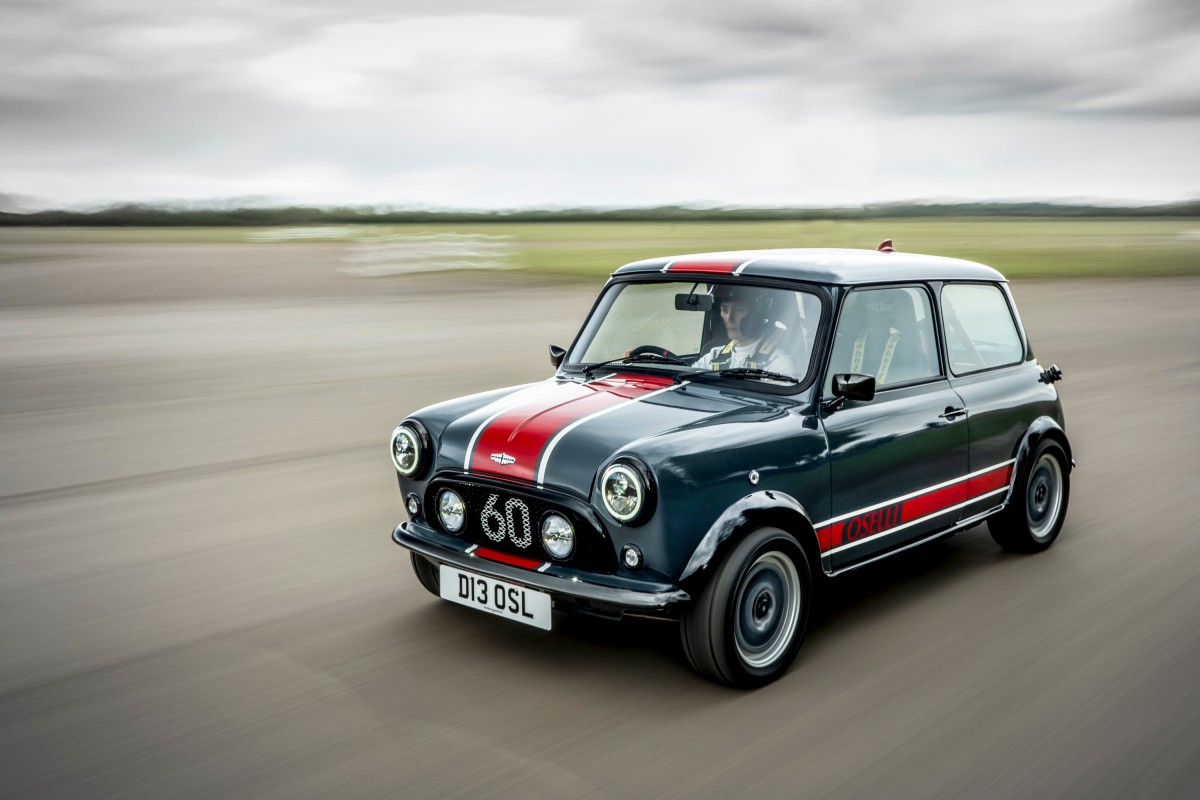 The Mini Remastered, Oselli Edition from David Brown Automotive produces over 70 per cent more power than the original.

With performance enhancements from powertrain tuning specialists, Oselli Engineering, the latest offering from the UK outfit boasts a 1450cc engine with twin SU carbies that produces 93kW of power and 153Nm of torque, the latter at 4500 rpm.

As its name suggests, the Mini Remastered is new for old version of the original Mini from the 1960s.

First produced in 2017, it launched with a 1275cc version of the classic A-Series engine.that produced 53kW of power.

The special Monte Carlo edition however had a 1330cc engine with 62kW.

The latest offering is hand-made to order in Brown’s Silverstone build facility, with a drivetrain engineered in partnership with Oselli, the acclaimed British engine tuning specialist first founded in the 1960s.

Designed and engineered to have a dual personality, Mini Remastered, Oselli Edition is just as comfortable on the street as it is on the racetrack.

The young racing star, is a true Mini devotee, having personally owned a version of the classic city car for a number of years.

It also comes with high-performance brakes by AP Racing, sports-orientated suspension by Bilstein and a free-flowing sports exhaust system.

The car is fitted with larger 13-inch wheels shod with high-speed-approved tyres to maintain grip on road or track surfaces.

The Oselli Edition is constructed with a remastered five-speed gearbox, while an automatic version is also available — offered as a four-speed set-up, with a 1380cc engine.

A selection of unique exterior colours are available with contrasting stripes that carry through to the interior design.

A choice of ‘Carbon Grey’ and ‘Old English White’ base colours match the accents in either ‘Competition Red’, ‘Royal Blue’ or ‘Heritage Green’.

All exterior graphics are hand-painted for an extremely high-quality finish.

Monochrome, hand-enameled badging, used in other limited-edition, performance models, such as the Speedback Silverstone Edition, adorns the exterior, with full black chrome brightware.

The grille features the number ‘60’ in contrasting hues, a nod not only to the race numbers of cars taking to the track, but also to the 60 years since the original Mini first rolled off the production line.

Oselli Edition can be ordered in either a two- or four-seat configuration, with the two-seater featuring bucket seats shaped for a thrilling ride and a rear hand-trimmed roll cage, while a four-point seatbelt harness adds to the feel of a car intended for the racetrack.

There is also the option to order the car with twin fuel tanks for extra mileage or race events.

An interior lined with hand-trimmed luxury leather and Alcantara materials emphasises the premium look and feel.

Mini Remastered, Oselli Edition is available to order now in both right and left-hand drive.

Pricing is available on application.

CHECKOUT: Pacesetter a trendsetter for Mini