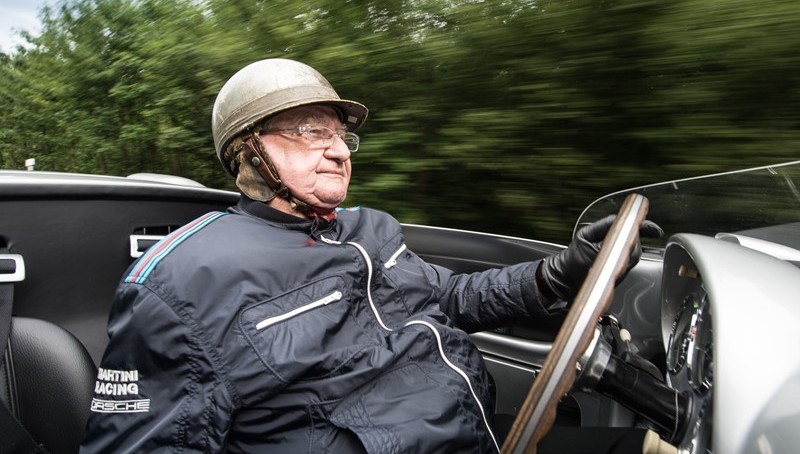 Riley Riley
One of the greatest racing drivers of all time is celebrating his 90th birthday.
Former Formula One driver and sports car legend Hans “Lucky John” Herrmann, was born in Stuttgart in 1928.

Herrmann took competed in 19 World Championship Grands Prix, making his debut on August 2, 1953 and scoring one podium and 10 championship points during this time.

It was driving for Porsche in endurance racing however that the former baker really made his name, taking Porsche’s first outright victory at the 24 Hours of Le Mans in 1970 — in a Porsche 917.

Herrmann is regarded as one of the most reliable and consistent race drivers of all time, with more than 80 outright and best in class victories.

Bullitt Mustang on the menu

The proverbial “Hans im Glück” (Lucky John) competed in many legendary races such as the Mille Miglia, the Targa Florio, the Carrera Panamericana and of course in Le Mans.
He had many lucky escapes during his career including the spectacular moment in the 1954 Mille Miglia when Herrmann and co-pilot Herbert Linge ducked their heads to pass under the barriers at a level crossing just in time to beat the approaching Rome express.
A photo of the incredible moment was turned into postcard, with the inscription “You’ve got to be lucky.”
In conversation, however, the race driver added in a more sombre tone: “Luck, for a racing driver, is to survive.”
And survive he did, after a kidnap attempt in the 1990s when he was kept in the boot of a car for many hours before breaking free.
Not only did Herrmann take part in all the great endurance races and European hill climb championships; he also carried out countless test drives in the newly-opened Weissach Development Centre.
In 1969 the Porsche works team, with pilots Hans Herrmann, Jo Siffert, Vic Elford, Rolf Stommelen, Udo Schütz and Gerhard Mitter, gained the manufacturers’ world championship title for Porsche for the first time.
In one of the most thrilling Le Mans finishes of all time, victory was snatched from him in the final 120 metres by Jacky Ickx in a Ford GT 40.
One year later, however, in his 11th Le Mans start, he brought home Porsche’s first outright victory.
After winning Herrmann announced his retirement, at the age of 42.
Before the race, he had promised his wife Madelaine that if he won he would give up his dangerous profession.
He has remained active in retirement, taking part in many vintage car events for the Porsche Museum, including the “Le Mans Classic”, the “Targa Florio” and the “Solitude Revival”.
Check out these stories too . . .
Bill, 91, loves his Tesla
Spooky tale of Tassie sportster
REC’d Mustangs turned into watches