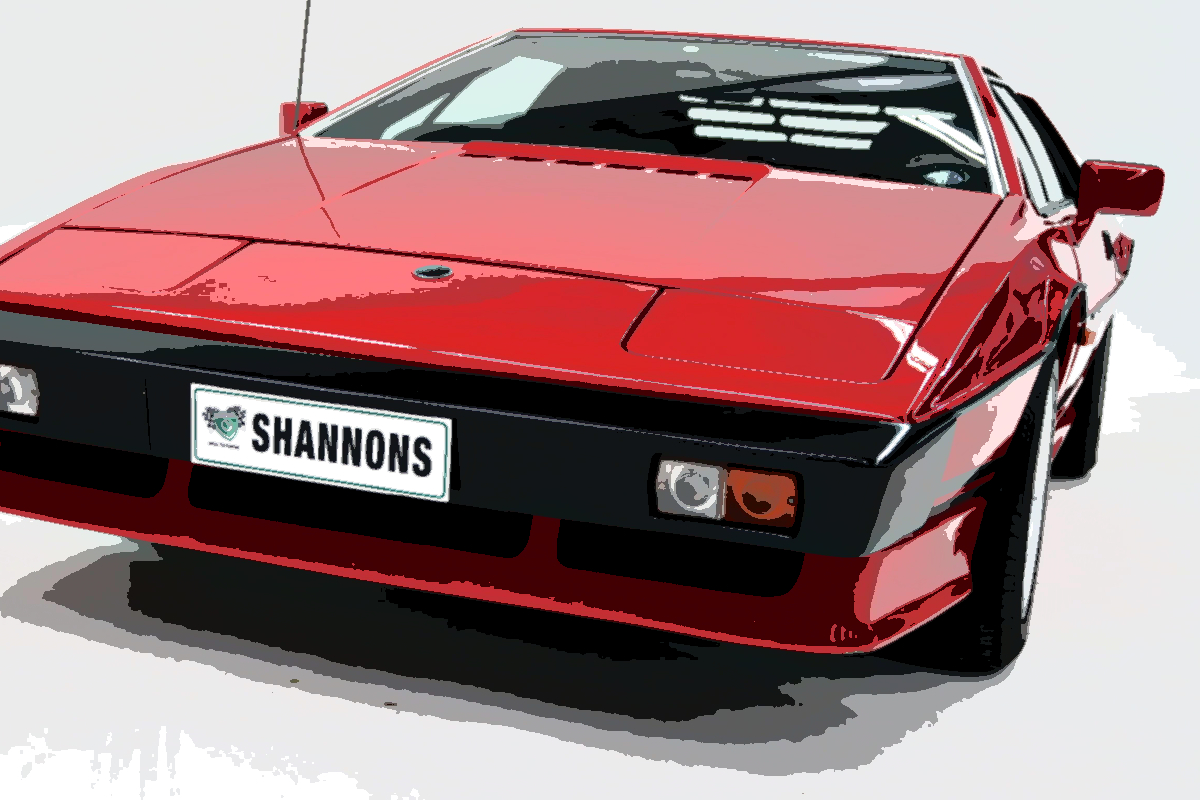 Lotus sports cars come and go, with the company about to pull the pin on two of its long-serving classics — the Elise and Evora.

Time is also running out for this 1982 Lotus Esprit Turbo Coupe which goes under the hammer next week in Sydney town.

The Giorgetto Giugiaro-styled Esprit was Colin Chapman’s first serious attempt at building a sports car capable of taking on the likes of Porsche and Ferrari.

Originally unveiled as a concept at the Turin Motor Show in 1972, it would be another four years before the customers began taking delivery of their purchases.

You might recognise the Esprit from the 1977 James Bond film The Spy Who Loved Me, where it achieved fame for its daring underwater exploits.

Although it looked every inch the futuristic Italian-styled supercar, both inside and out — the Esprit remained true to the Lotus philosophy of achieving performance through light weight.

It was his philosophy, way before ‘minimalism’ became fashionable.

Codenamed project M72, the Esprit Turbo was developed in the late 1970s and given the new type number 82 when launched in February, 1980.

At its heart was a totally redesigned 16-valve four-cylinder engine with dry-sump lubrication and a Garrett AiResearch turbocharger mounted behind the cylinder block.

With 156kW on tap, the Esprit Turbo’s performance was elevated to supercar levels — its 240km/h top speed on par with the likes of Porsche’s own Turbo and the Ferrari 308.

In order to promote the new model, Lotus released a limited edition in distinctive metallic blue with red/silver stripes of its then major sponsor in Formula One, Essex Petroleum.

Despite poor initial sales, due in part to a looming recession in Britain, orders for the Esprit Turbo picked up in 1981.

They were helped no doubt by the appearance of the car in another Bond flick, this time For Your Eyes Only — sporting a set of ski racks.

By the time the original Turbo ceased production in 1987 a total of 3155 had been made and prices are finally beginning to reflect the significance of this important model, particularly the early cars.

According to the Certificate of Provenance provided with the car, this Lotus Esprit Turbo left the Hethel factory on May 28, 1982 finished in Calypso Red, contrasting black leather with cloth inserts, black carpet and silver roof lining.

One of 205 turbocharged Esprits built in 1982 and one of only six UK cars sold with the same combination of colour and trim options that year, the original dealer was Malcolm Templeton Ltd of Northern Ireland.

The car has a well-documented history in the UK, with the first owner relocating to Aberdeen, Scotland and a replacement engine installed under warranty for the second owner.

The previous Sydney owner bought the Lotus from UK Sports Cars in Canterbury, Kent in May, 2013 and spent considerable time and money improving the car, including the installation of a modern air conditioning unit.

Serviced by marque specialists Simply Sports Cars of Artarmon, the engine underwent a full rebuild in 2014 by well-known race car/Lotus engineer Neil Trama in Canberra at 51,000 miles costing in excess of $10,000 (plus a further $6000 paid to Autotech for removal and installation).

The cosmetics have been freshened up with both bumpers refurbished at considerable expense, the factory wheels restored and numerous smaller items attended to.

Based on Sydney’s Lower North Shore, the current owners have continued improving the Esprit, having the carburettors rebuilt, the turbo and wastegate serviced and a new fuel system including pump and pressure regulator fitted in 2016.

The alternator has also been rebuilt, brakes overhauled plus new front and rear springs and dampers installed in 2017.

Neil Trama did an engine tune-up in April, 2020 when the cam belt and tensioner were done, along with fresh oil, filters, spark plugs and a new distributor cap.

The cooling system was also upgraded in 2020, including a new radiator.

Benefiting from a great deal of refurbishment, Shannons say this Esprit Turbo would suit a collector or enthusiast looking for a strong performing, driver-level example of this fast appreciating iconic Eighties mid-engined supercar.

Now showing just over 57,000 miles on the clock, the Lotus is currently registered in NSW until August, 2021 and comes with an exceptionally detailed history file, workshop manual, handbook and quantity of spares.