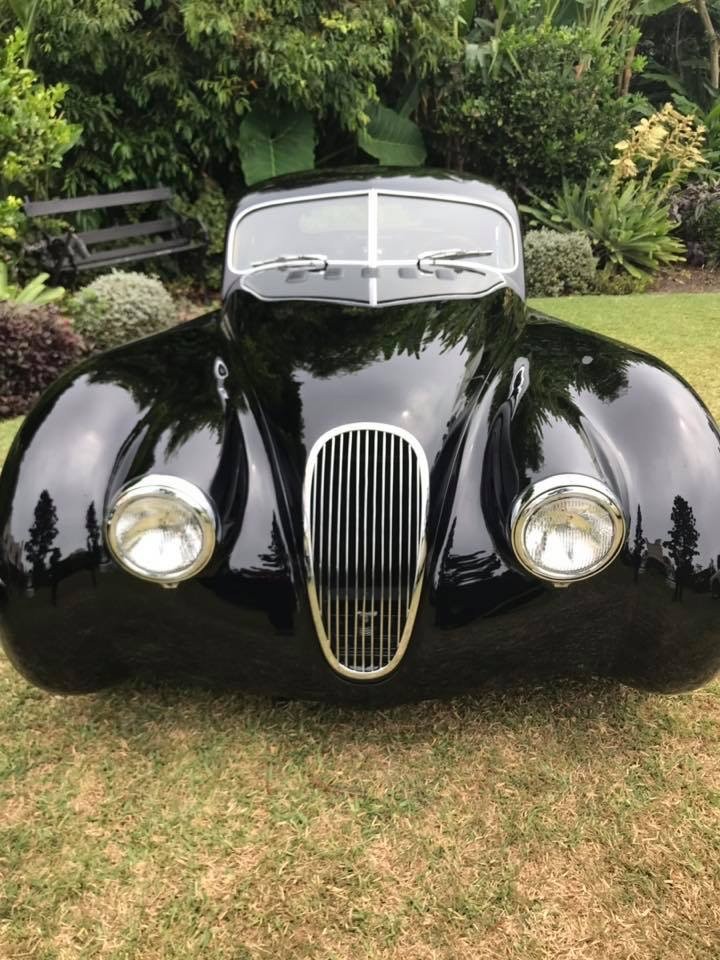 Justin’s Jag does it again

Justin and his small team first came to the notice of those kings of custom, the Americans, back in 2013, when his magnificent customised 1960 Dodge won the H.A. Bagdasarian Award as the world’s most-beautiful custom at the Sacramento Autorama show.

Cars4starters readers will know that we’ve followed Justin’s story and progress for nearly a year now.

His latest triumph, a magnificent chopped and customised 1953 XK120 Jaguar, had been bought by a Melbourne collector.

We also reported that before the sale, Justin had locked in the car for a couple of major shows –one on each side of the Atlantic.

The mouth-watering XK has been chopped 75mm and fitted with a totally re-engineered 5.3-litre Jaguar V12 engine from an XJ-S that has been stroked back to five litres.

Before it was fitted to the car, Justin tested the engine, revved it to 8200rpm before backing off.

Weighing in at just 1100kg, one can only imagine what’s it like to sit behind the wheel of this rolling piece of black sculpture.

The dyno confirmed what a great powerplant it was, producing 343kW of power– rather more than the 120kW of the XK 120’s original engine.

The car is fitted with air suspension and American Wilwood disc brakes – all round of course — and the superb custom leather interior is a classic Jaguar colour called suede green.

When the just-finished XK120 LM (for Le Mans) rolled off the truck last month at the Lindsay House Concours, in Sydney, it was spotted by a Melbourne collector who was at the show with his McLaren F1. He also has a Bugatti Veyron (among other toys) in his garage.

Justin explains that is was love at first sight for the Melbournian and within an hour or so a deal had been struck and he was the new owner.

“I’m actually proud that the car stayed in Australia and went to Melbourne,” he said.

The new owner agreed that his just-acquired beautiful black Jag should honour its appointment in the United States last month for The Quail motorsports gathering near Pebble Beach.

Justin was thrilled the car was accepted for the show but he was “completely blown away” when it won the custom coachwork award.

“It was such a privilege and honour to show my car at this amazing event,” he added.

This month, the XK is off across the Atlantic to the UK where it will be on show at the Blenheim Palace Concours and then for a day gracing the grounds of the country estate of the founder of Jaguar, Sir Williams Lyons.

While some Jaguar purists might not approve of customising any car that wears the legendary badge (let alone a classic XK120 coupe), they should know that Jaguar’s recently retired design boss, Ian Callum, generously wrote to Justin saying he has no doubt that Sir William would have approved.

But it didn’t end there.

Callum’s successor, Julian Thompson, is reported as having asked: ”Can we put it in our design studio?”

“We have just moved to a fantastic new facility. I would love to have it on display. My team could find it truly inspiring.”