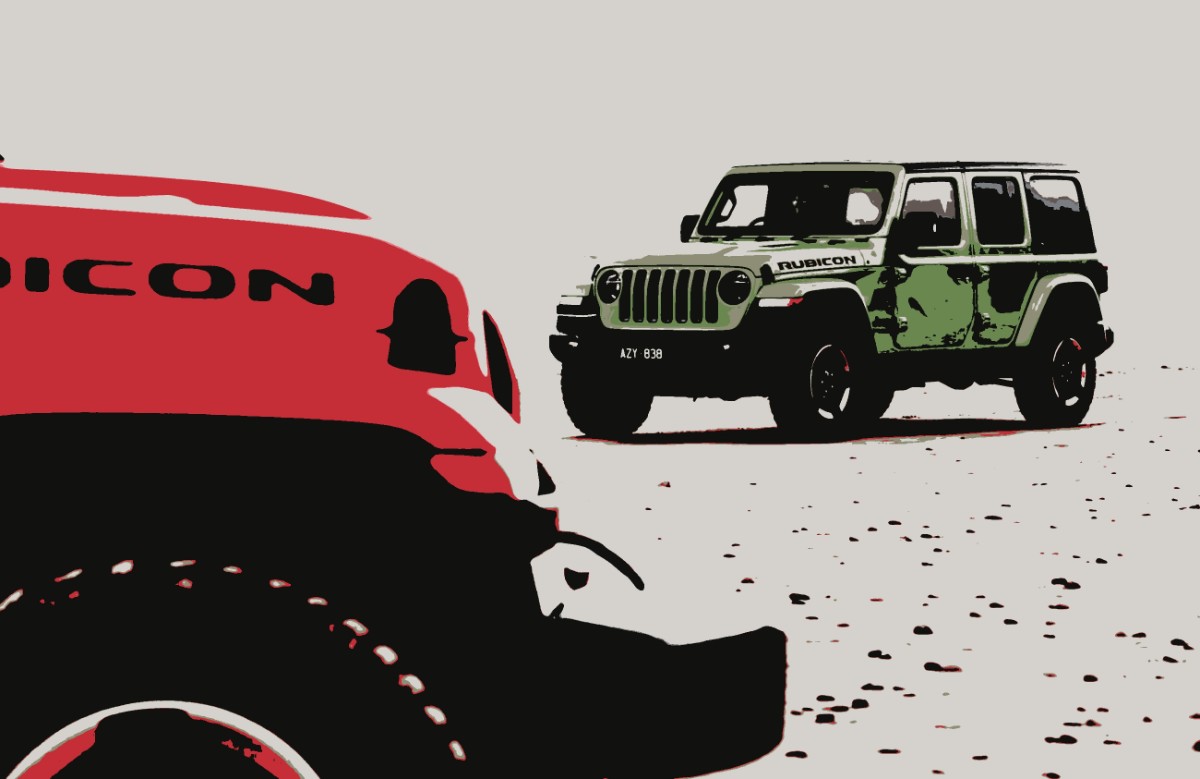 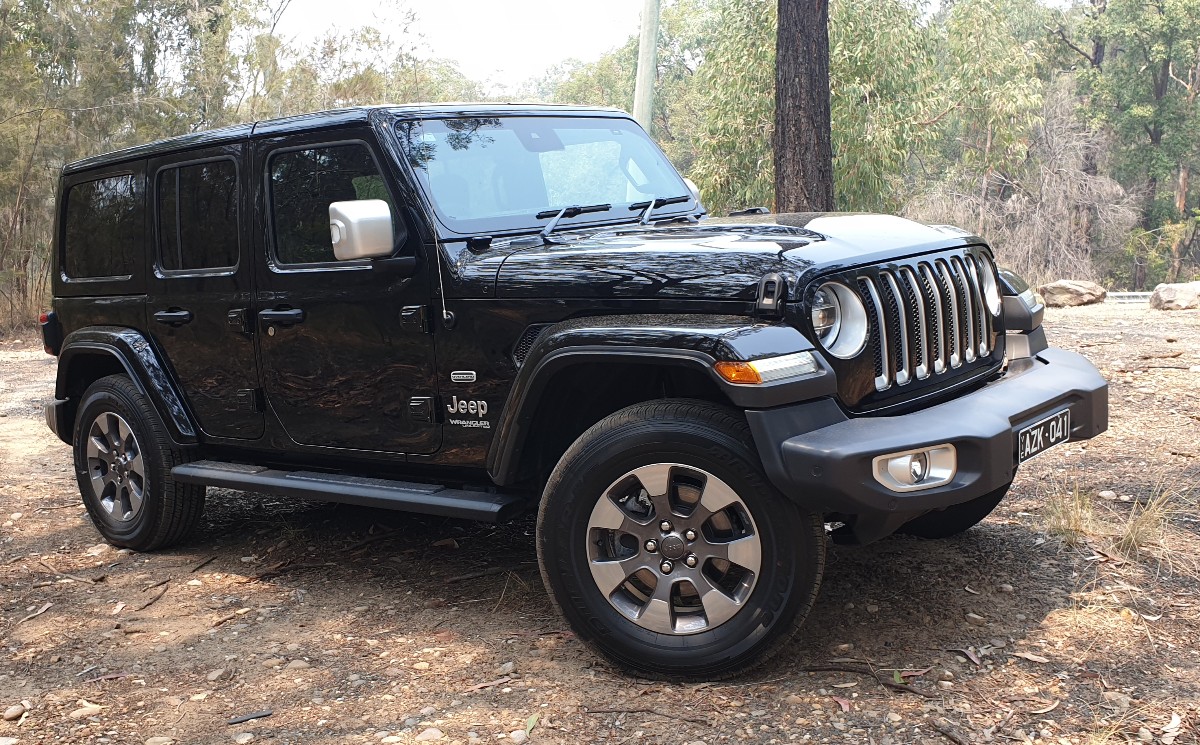 Jeep’s iconic Wrangler received a refresh in 2018 but it wasn’t until 2019 that Australia received the update.

It included a safety upgrade for cars built post December 2018, although Wrangler still receives just one star from ANCAP.

Jeep ensures petrol lovers are well looked after with a three-model range., but only the top of the range Rubicon offers the option of an engine fed by oil.

Otherwise there’s a 3.6-litre petrol V6 in the starter pack Sport S, the Wrangler Overland as tested, and the Rubicon.

It’s an odd choice given torque is a winner for off-roading — so Jeep must figure a bare few will actually exploit the car’s legendary capabilities. 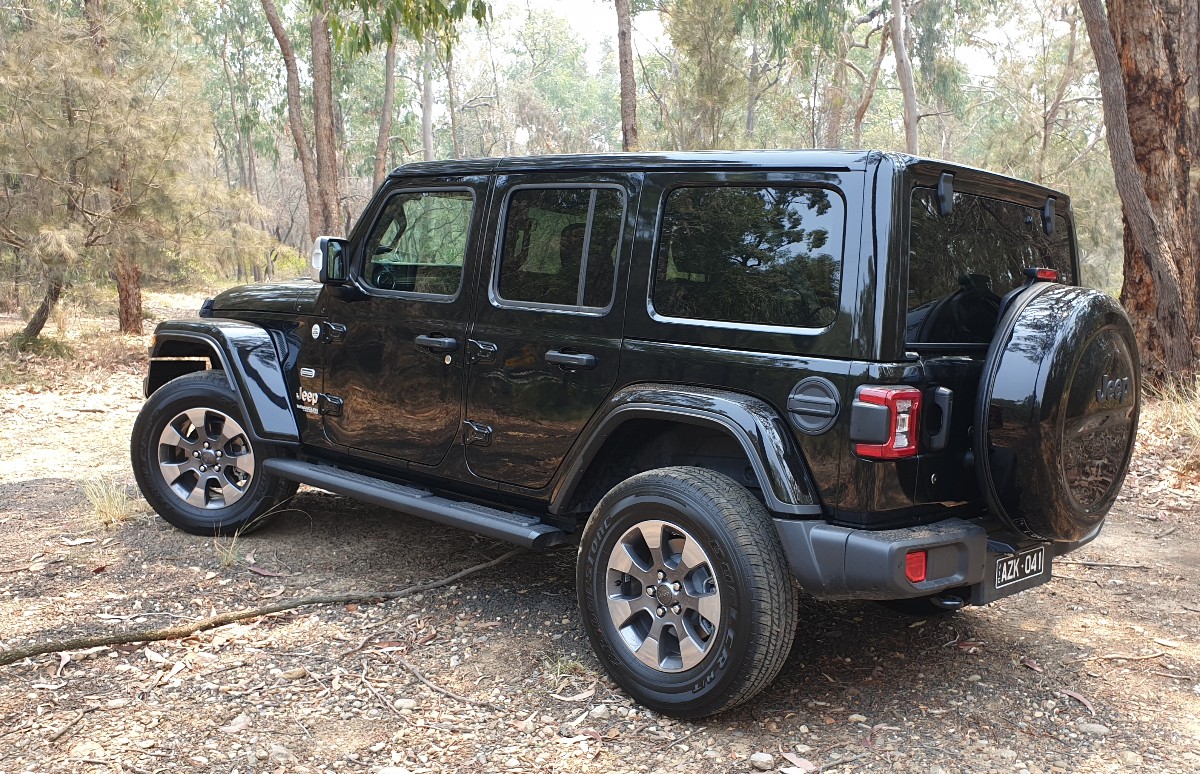 The Trail-Rated Overland is priced from $63,950 before on-roads.

That’s for the four door version, with Sport S and Overland also offered in a two-door body style.

Rubicon is four-door only.

Wrangler comes with the traditional, removable roofs and doors, along with foldable windscreens.

A slightly different situation is found at the rear where the bottom half of the split door has to be opened first to open the vertically folding top.

The look is an evolution of Wrangler’s very Jeep-like design.

From each angle it is broad shouldered, squared off, and assertive in stance.

It needs to be as it’s by no means as big as the looks suggest.

Up front is the signature seven bar grille, and that sits behind a Superman-like, jut jawed front bar.

It’s a real standout because of how far it . . . stands out.

The bumper provides a 35.8 degree approach angle, and the square bum an impressive 31.2 degrees — off-road.

Get wet and it has a wading depth of up to 760mm for water play.

Front and rear lights are LEDs, and tradition stands proud here — with the Jeep’s trademark round front and cubic rear assemblies.

Inside Wrangler boasts a truly classy interior, even allowing for the grab handles for use off-road.

It’s a flat dash but there’s a genuine sense of high quality to both the look and feel — Jeeps haven’t always had that.

The layout, the materials, the touch factor, and the cool, split LCD driver’s display all contribute.

The screen has a small section that shows which of the drive modes (2WD, 4WD) the Overland is in.

It also flashes an animated Jeep graphic on start up.

The DAB audio is superb and makes full use of the nine speakers, accessed via the 8.4 inch touchscreen.

Packaging is impressive given its overall size, with a wheelbase of 2459mm — better than expected legroom front and rear as a result.

The seats are McKinley leather clad and, as always for the Aussie market, dip out on vastly preferable cool air flow.

But they are surprisingly comfortable, supportive, and even better — clean down with the wipe of a damp cloth.

The rear vision mirror has a built-in compass that shows the eight main points as the car moves along.

It’s not all bourbon ’n’ grits though.

The driver’s seatbelt refused more often than not to release and travel smoothly when plugging in.

Even a verrrrry gentle tug would see the mechanism become as stubborn as a toddler with a lollypop who’s told it’s bath time.

Rears passengers get a pair of standard USB and USB-C plugs, plus a Australian friendly 230V socke . . . in an American configuration however.

Active safety is high in the Overland.

Unseen is the high tensile strength steel that underpins the chassis rigidity and side panel strength.

Front and rear sensors, airbags all round, plus Rear Cross Traffic Detection and Blind Spot Monitoring.

Trailer Sway Control and Forward Collision Assist are there too.

Tyre Pressure Monitoring is an essential item for vehicles such as this and proved its worth thanks to an invisible nail in one tyre.

The Reverse Camera is handy and the touchscreen’s HD capability makes reversing easier due to the clarity. 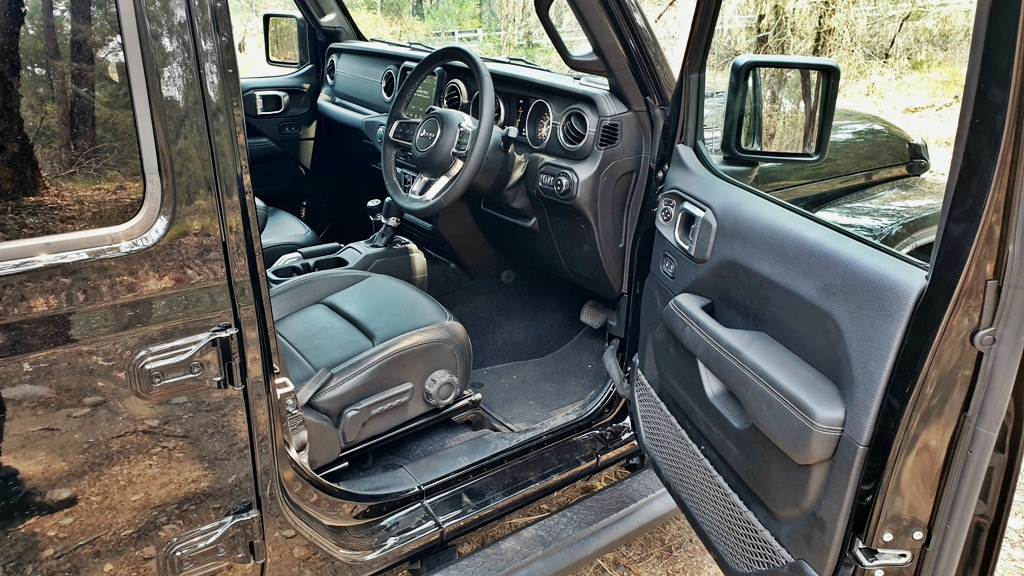 The steering is loose and the brake pedal action is lonnnnnnngggg. Them’s the bad bits.

The engine packs a 209kW punch and goes for the jugular with 347Nm of torque.

But being a petrol engine, it requires some high revs to achieve those figures.

In contrast the Rubicon’s diesel spins out 450Nm at a far more useable 2000 revs and channelled through an 8-speed auto, would make more sense as the engine of choice.

Another reason to consider diesel is fuel consumption.

There’s a sponginess to the ride feel and that’ reflects the high sidewalls of the tyres.

The suspension is tough, as you’d expect, with coil sprung solid axles able to take any amount of tarmac and dirt pounding.

Although the tiller has plenty of freeplay left and right, once a driver “gets” that — it’s a nimble handler and can be thrown around nicely.

Left in 2WD mode the front can be used to scrub off velocity in corners as the all terrain tyres go into a momentary but controllable slide.

Wrangler can be hustled along, but does need a bit of time to wind up.

There’s also the dry weight of the machine to consider — a very hefty 1900kg.

When up and rolling, and getting a bit angry, however, there’s a satisfying snarl and grumble from both the engine and the exhaust.

Get a bit naughty and the transfer case slips into 4WD, easily and without fuss, ready to display why it’s Trail-rated.

The 8-speed adds its own touch of class with super smooth changes and will hold gear on downhill runs for driver safety. 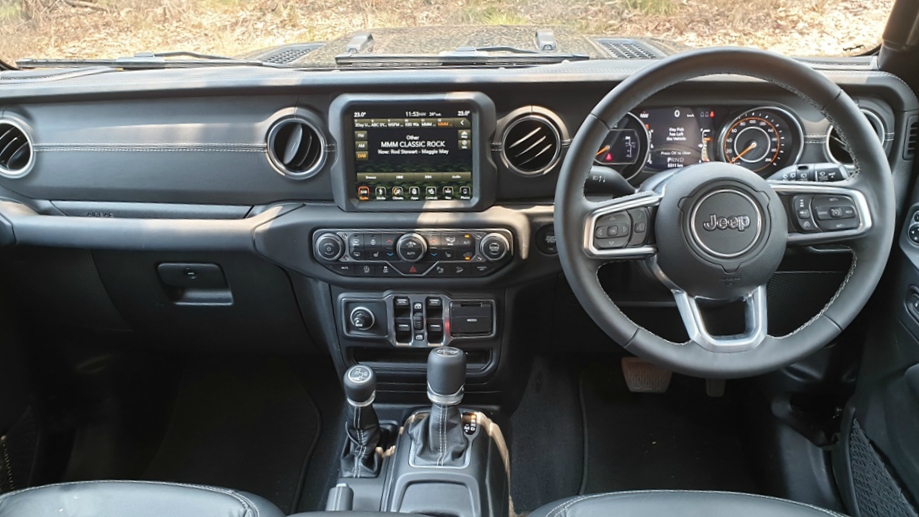 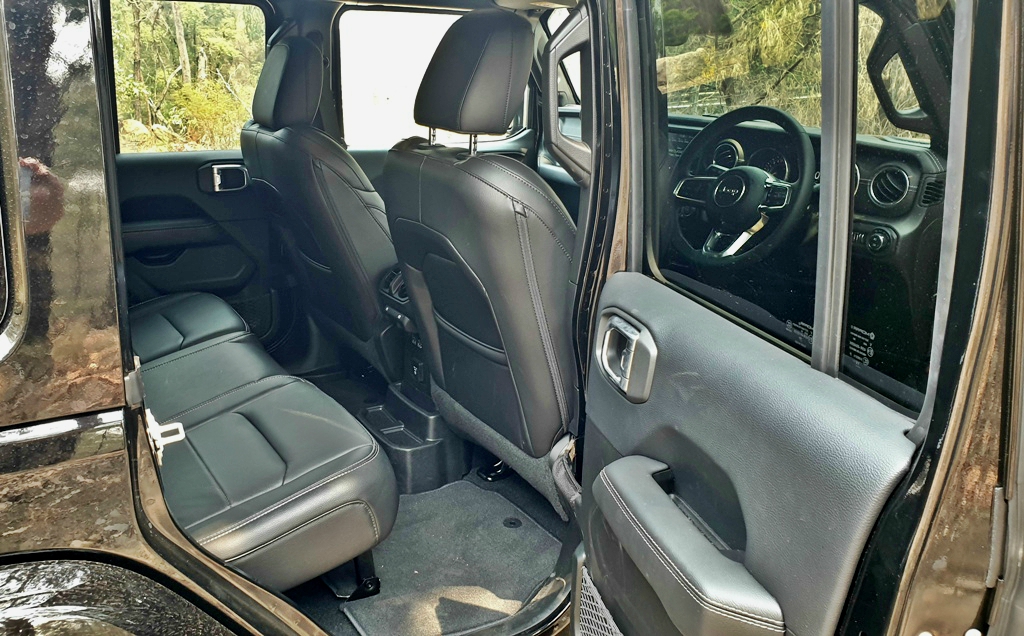 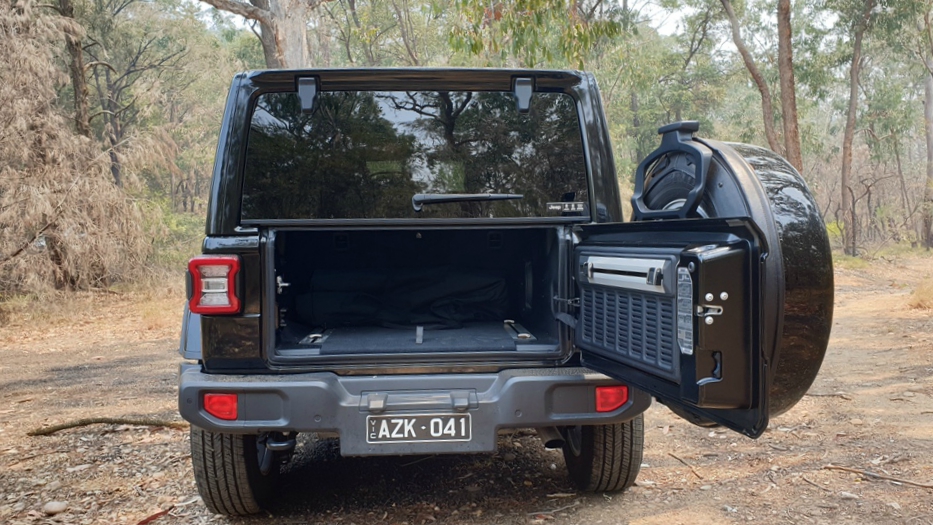 The American predilection for petrol engines is evident.

As good a performer as the Overland is with a high-revving V6, a diesel would really be the choice.

You can get one with the Rubicon, but you’ll pay a fair bit extra for it.

It’d suit those that want to use the Wrangler for its intended purpose and exploit the off-road capabilities of the Wrangler chassis.

The Rubicon also comes with meatier rubber and an axle system that disconnects for more suspension travel.

Otherwise, the Overland is ideal for the occasional dirty weekend while still being a decent enough daily driver. 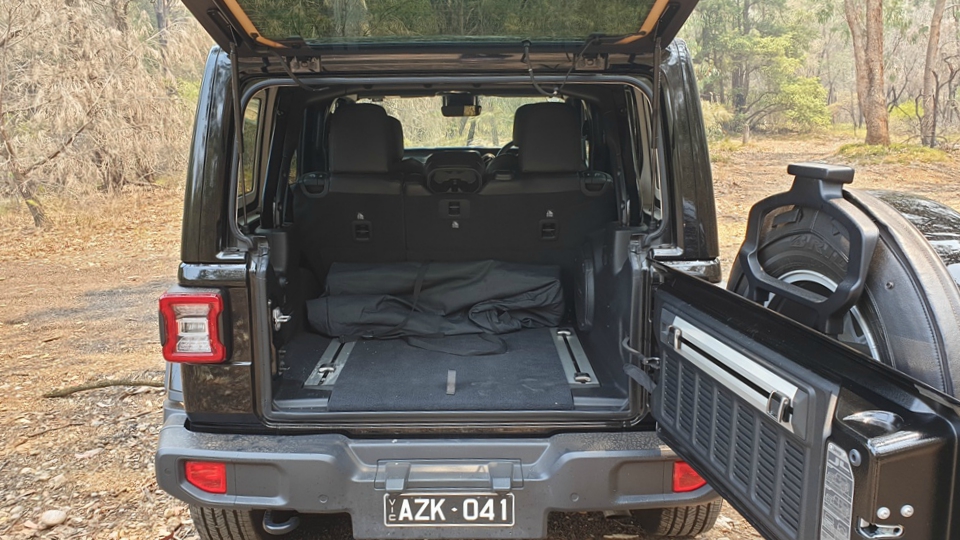 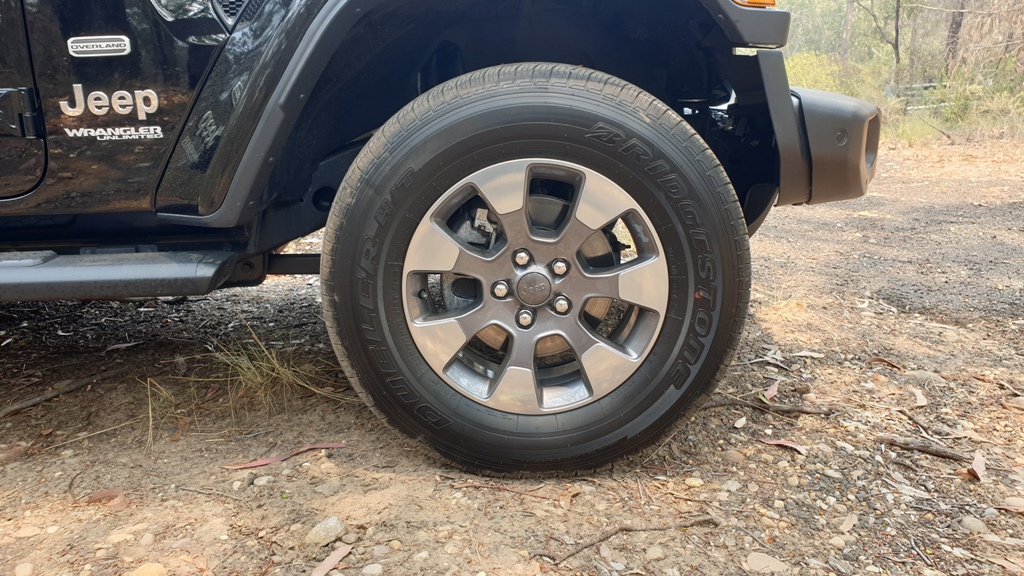 Check out deals on the Jeep Wrangler