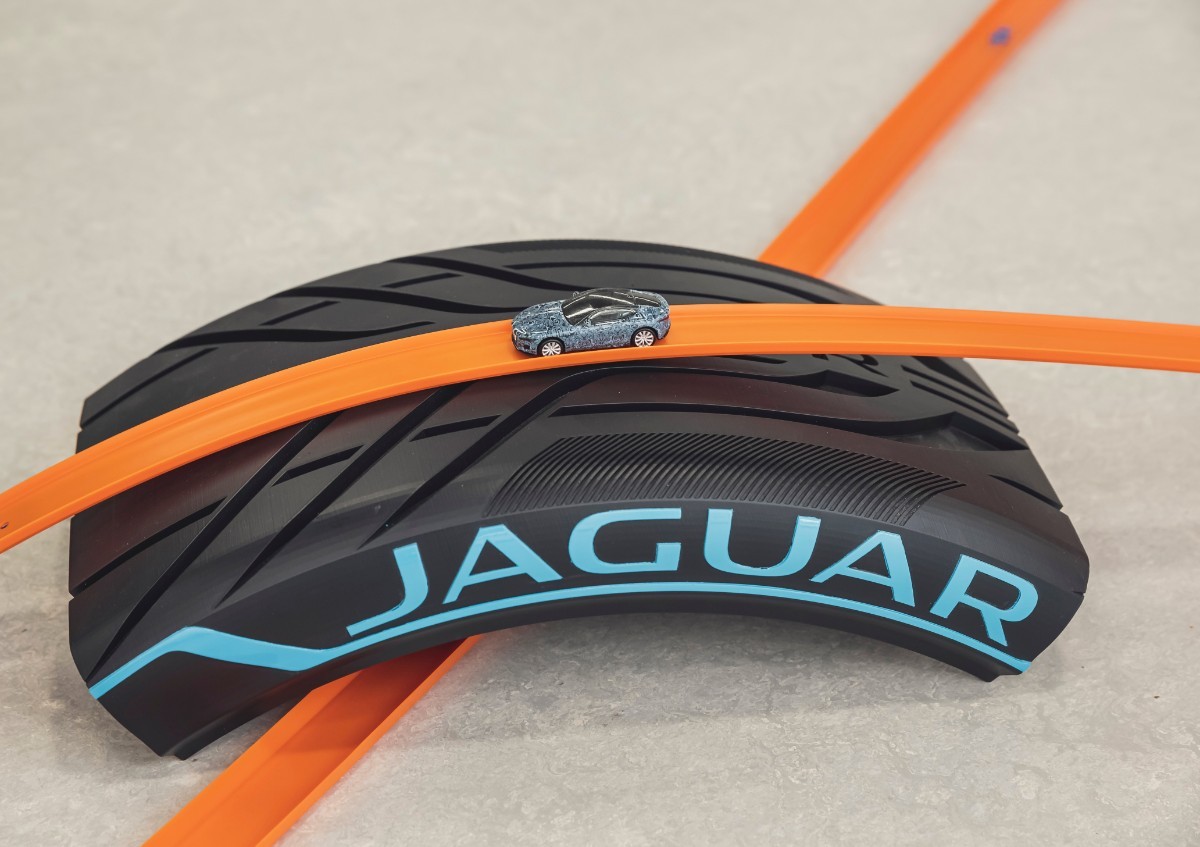 To celebrate the launch of the new Jaguar F-Type, Hot Wheels has created a die-cast model of the car complete with camo paint job.

Working in close collaboration, designers from Jaguar and Hot Wheels used the CAD data of the real car to craft the precise 3D-printed model, recreating every beautiful detail of the new F-Type, including its striking new clamshell bonnet, distinctive super-slim Pixel LED headlights and more sculpted front and rear bumpers.

The Hot Wheels team also faithfully recreated the Velocity Blue colour from the SVO Premium Palette, and even hand-painted the F-Type badge on the back before the model was camouflaged ahead of its own ‘reveal’ in the film.

The tiny F-TYPE reached scale speeds of up to 482km/h (300mph) along the custom-built track which was designed and developed with the guidance of Official Hot Wheels master track designer Paul Schmid.

Bryan Benedict, Senior Manager of Product Design at Hot Wheels, said: “We’ve been working with Jaguar for over 40 years but this was an opportunity to do something really special with a car that was not yet on sale.

“To go behind the doors of the top-secret Jaguar Design Studio and work with the talented design team to bring this car to life and reveal it on our unmistakable orange and blue track was a unique opportunity.”

The state-of-the-art Jaguar Design Studio opened in September, bringing the entire design team into one purpose-built creative space for the first time in the marque’s 84-year history.

The most technologically-advanced design studio in the world, it features industry-leading modelling robotics, virtual reality, an 11-metre 4K powerwall, and has double the floor space of the previous site – allowing 20 full-size clay models to be worked on simultaneously.

Jaguar design director, Julian Thomson, said: “As a designer and huge car enthusiast, Hot Wheels models have been a part of my life since childhood. They capture the imagination, make owning the car of your dreams a reality, and give you the first opportunity to actually ‘drive’ a car.

“We are used to creating models in clay but seeing such a finely-detailed 1:64-scale model of the new F-TYPE race around the studio, showcasing every stage in our design process, was a truly unique experience.”

The Hot Wheels brand by American toy maker Mattel dates back to 1968.

It was the main competitor for Matchbox until 1997, when Mattel bought Tyco Toys (then-owner of Matchbox).

Many car makers have licensed Hot Wheels to create scale models of their cars, based on original blueprints and detailing.

Although Hot Wheels were originally intended for children, the models have become popular with adult collectors, with limited edition models now made.

For its 40th Anniversary in 2008, Hot Wheels celebrated its 4 billionth car with the production of a diamond-studded model worth US $140,000.

It had 2700 diamond chips and was cast in white gold, with rubies serving as tail lights.

The highest price paid for a Hot Wheels model was $70,000 in 2000 for a pre-production version of a Volkswagen Rear Loader Beach Bomb which had surfboards poking out the back.

Unfortunately the model was top heavy and failed initial testing, and was replaced by a widened version with the surfboards on the side for the 1969 model year.

The “rear loader” version is a real rarity and much sought-after piece, with only 50 known to exist.

You could probably buy a real Jaguar F-Type for less which is priced from $126,400 in Australia.

CHECKOUT: Justin’s Jag does it again