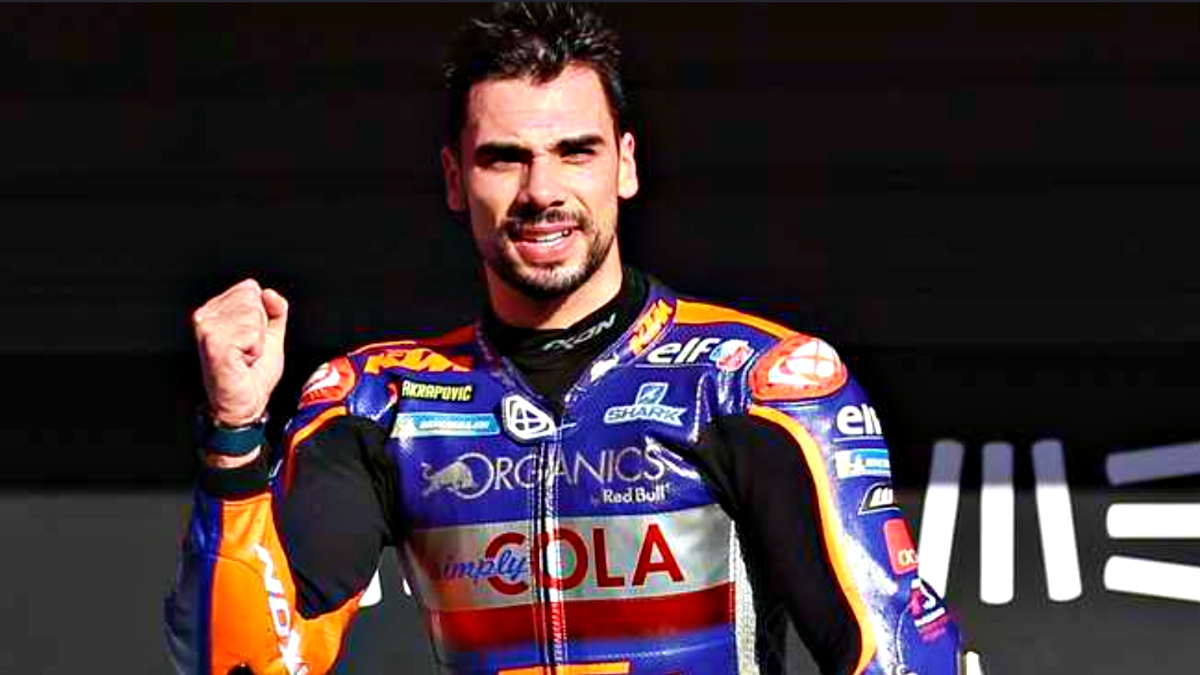 PORTUGUESE rider Miguel Oliveira did himself and his country proud with a runaway win in the end of season MotoGP on the undulating rollercoaster circuit at Portimao, on the south coast of Portugal.

It was his second win of the season in the premier class, and he started from pole, and  led all 25 laps of the 4.7km circuit, finishing more than three seconds ahead of Australia’s Jack Miller.

Oliveira, who had never before led a single lap in MotoGP, had a faultless run on his Tech3 KTM and was never even challenged.

Behind him, however, Yamaha’s Franco Morbidelli and Miller had a near-repeat of their previous battle, but this time Miller managed to sneak through on his Pramac Ducati, which gave Ducati its first constructors’ championship since 2007.

Joan Mir, who had already secured the 2020 MotoGP championship, had an awful day on his Suzuki, colliding with Francesco Bagnaia’s Ducati and then retiring his Suzuki with an electrical problem on lap 16 — while teammate Alex Rins dropped down the order to finish 15th after starting from 10th.

Rins also made contact with Johann Zarco’s Avintia Ducati and KTM’s Brad Binder retired early after a crash – but he still finished the season as rookie of the year.

As well, and despite being pipped to second spot by Jack Miller, Franco Morbidelli still finished as runner-up in the championship on his 2019-spec Petronas SRT Yamaha.

Pol Espargaro took his KTM into fourth spot, with  Takaaki Nakagami close behind on the Honda.

Next came Andrea Dovizioso who started from 12th on the grid and came out on top of a race-long battle with a quartet of other riders to claim sixth, ahead of Honda’s Stefan Bradl, Aleix Espargaro on the Aprilia and the Honda of Alex Marquez.

Johann Zarco completed the top 10 despite  his early contact with Mir, with Maverick Vinales and Valentino Rossi 11th and 12th on their Yamahas.

Cal Crutchlow qualified fourth on his Honda, but sank to 13th, ahead of a struggling Fabio Quartararo on the Yamaha M1 and Suzuki’s Alex Rins.

Danilo Petrucci missed the points on his final Ducati outing, as did Tech3 stand-in Mika Kallio and Avintia’s Tito Rabat.

Qualifying was a lot closer than  the actual race, with less than a second between Oliveira and Aleix Espargaro, back in 14th place.

It was a big pity being that the COVID bug prevented spectators and Oliveira’s countless fans from seeing his dominant performance.

But his family was there.

“You dream about these kinds of races and to finally be able to do it, it’s incredible. I have no words to describe it . . . just my gratitude to all the people . . .  and my team.”

Next year he will replace Pol Espargaro in the KTM factory team, riding with new teammate Brad Binder.