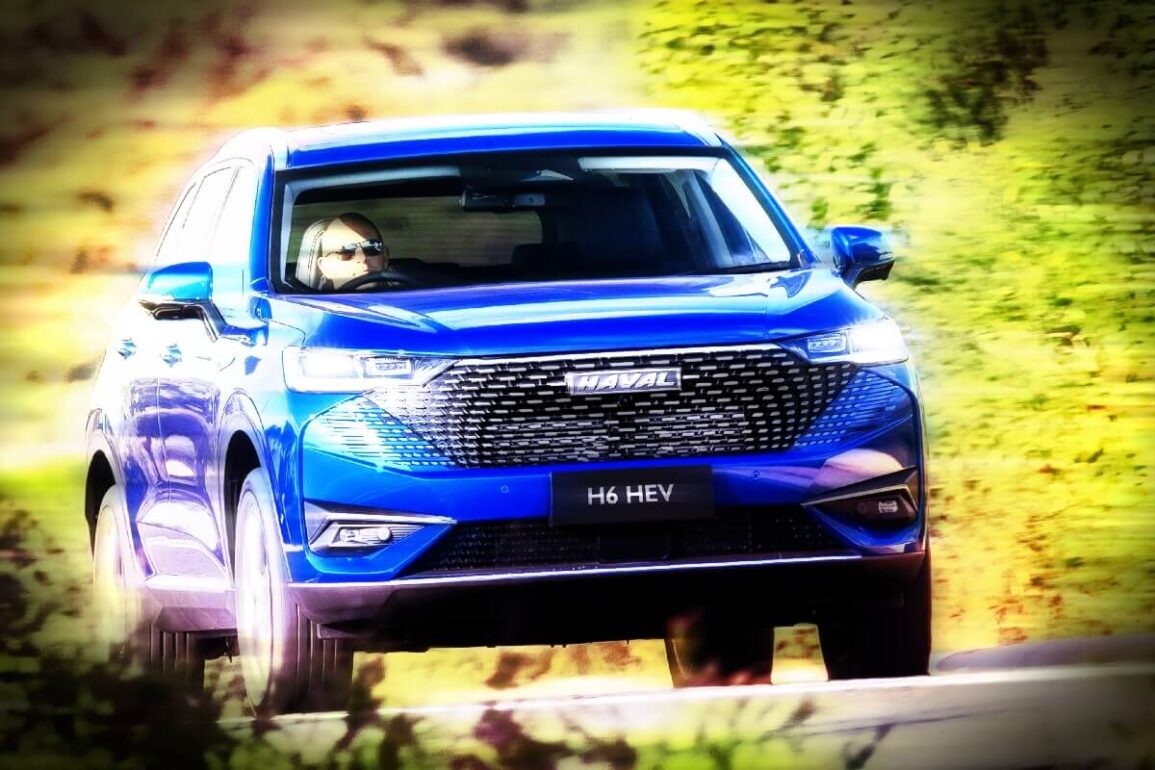 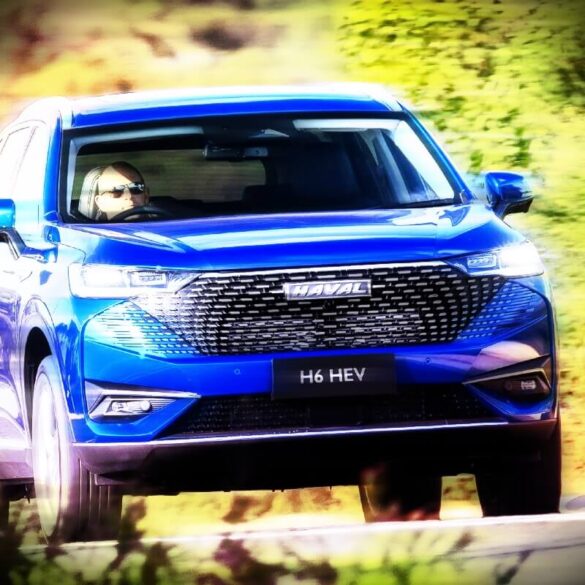 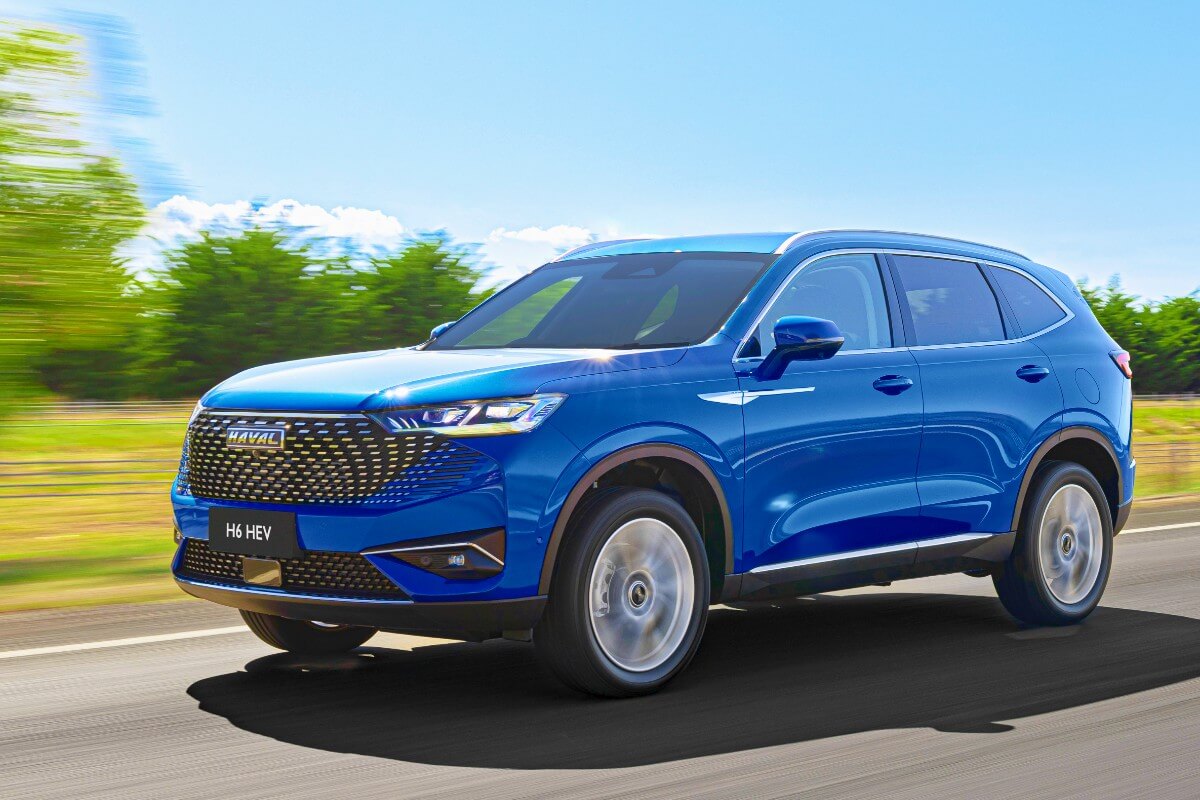 Chinese manufacturer, Great Wall Motors, has joined the electrification movement with the release of a hybrid petrol-electric version of its Haval H6 mid-sized SUV.

Given that it’s still a relatively new brand, designers have placed the H-A-V-A-L name in large, bold letters at the front and rear — rather than using a badge that most people wouldn’t recognise. 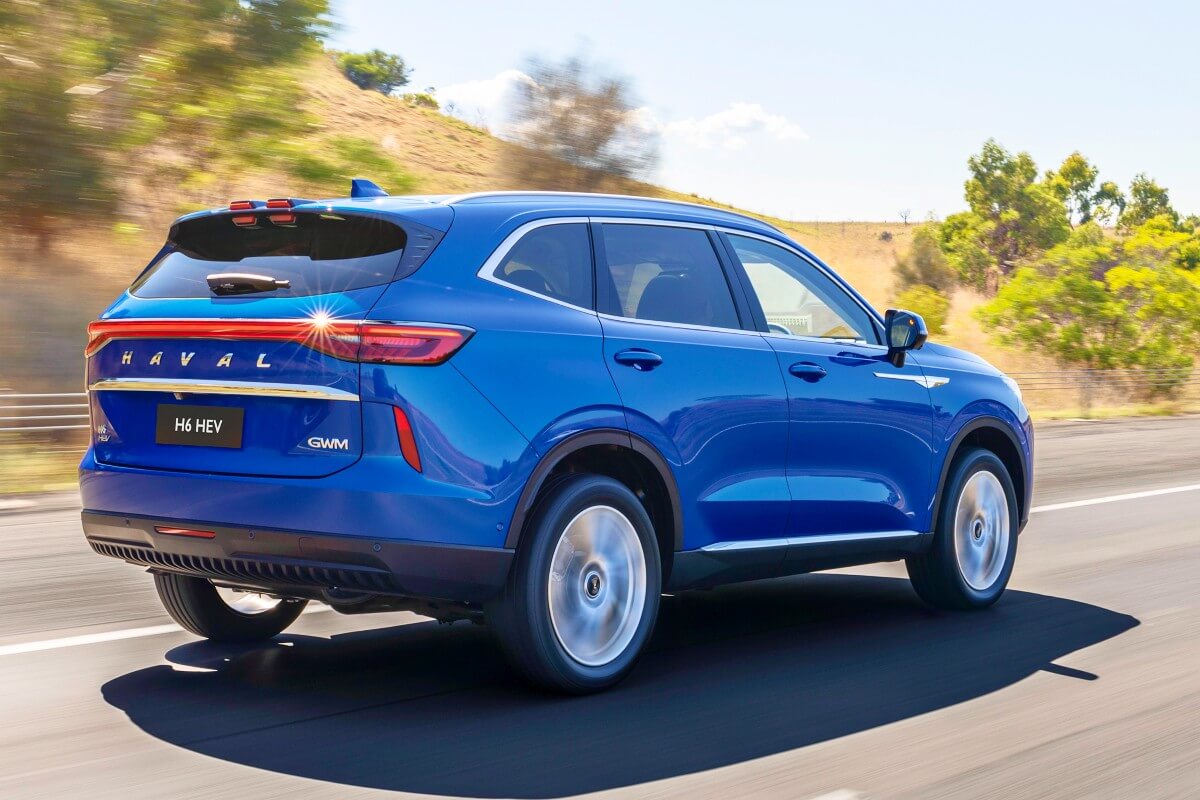 H6 Hybrid comes to Australia in a single variant based on the top-spec Ultra model with a high level of safety equipment and technology, priced from a very competitive at $44,990 driveaway.

There are seven exterior colour choices. Hamilton White is standard, the other six are a $495 option.

Standard features include 19-inch alloys, as well as adaptive cruise control with stop and go, front and rear parking sensors, automatic parking and a panoramic sunroof.

The Hybrid features a distinctly different front style from other Havals and, to our eyes at least — it makes a significant difference.

Two body-coloured side panels extend the grille to the edge of the vehicle, smoothing out the boxiness of other models.

There are twin rectangular LED headlights wrapping around the front, along with LED daytime running lights and LED fog lights below the grille.

The rear features a large lighting panel which spans the entire width of the vehicle.

Twin brake lights sit at the top of the rear window.

The Hybrid comes with an impressive suite of safety features that have contributed to a maximum 5-Star ANCAP safety rating.

There’s two large colour displays, with a centrally-mounted 12.3-inch touchscreen for infotainment and a 10.25-inch instrument cluster behind the steering wheel for driving data.

The absence of raised physical controls for the most commonly-used features such as audio and air conditioning means a series of taps on the screen for adjusting sound.

However, it can be adjusted through controls on the steering wheel too.

As is something of a growing trend, there is no embedded satellite navigation, so access needs to be made through Apple CarPlay or Android Auto (both wired) or direct from the smartphone via Bluetooth.

There is wireless smartphone charging in the front console and five USB ports, three in the front and two at the rear. 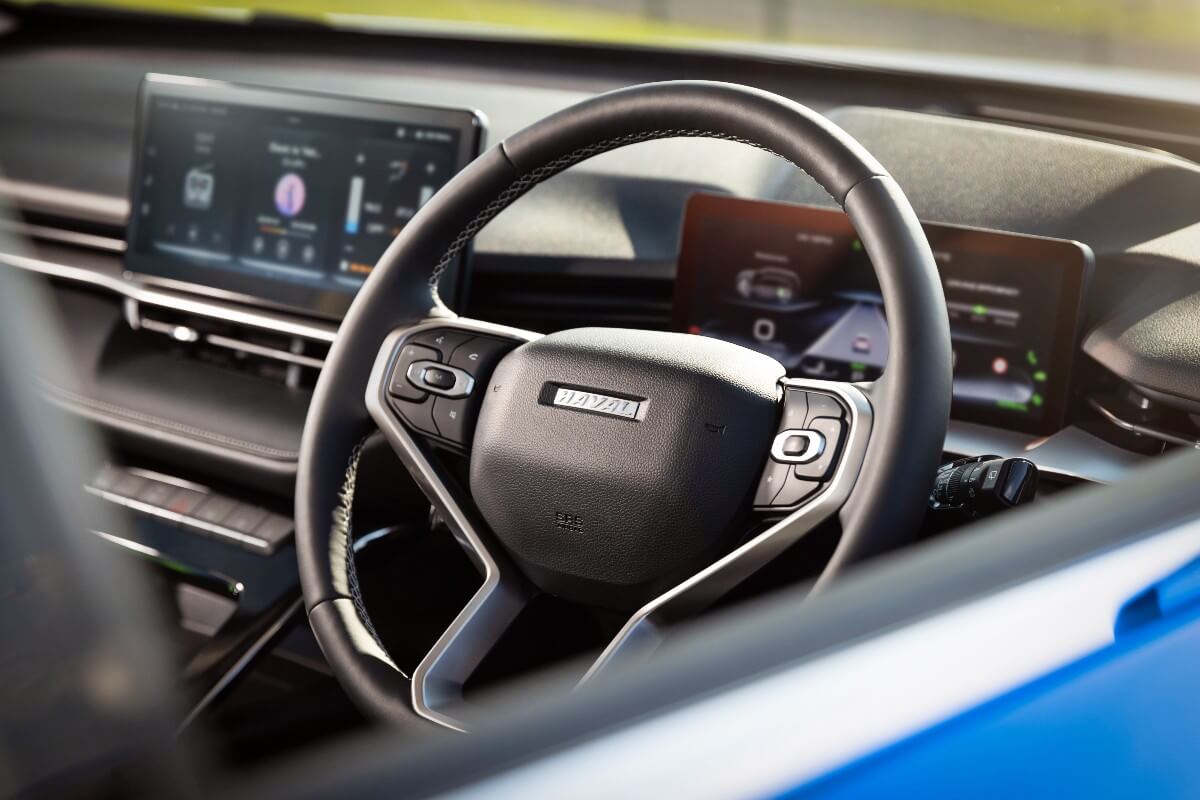 It’s hard to fault anything inside the H6 Hybrid Ultra which has a nice feeling of quality throughout.

There’s plenty of space all around, the Comfortek front leather seats are heated and ventilated with the driver having eight-way power adjustment, heated leather steering wheel and head-up display.

There’s dual-zone air conditioning which, together with a flat rear floor, good foot, leg and headroom, and the panoramic sunroof, make for a pleasant environment for rear passengers, along with air vents and a centre armrest with two cupholders.

At the back there’s a powered tailgate which opens on to to a 600-litre boot that expands to 1485 litres with the rear seats folded.

The batteries are located beneath a false floor taking up the space where a spare wheel would otherwise be stored, leaving a puncture
repair kit as the only option.

The quest for lower fuel consumption isn’t just limited to the benefits of the battery-powered motor.

Unlike the naturally-aspirated petrol engines in the rest of the H6 range, the Hybrid combines a 1.5-litre turbo-petrol engine and two-speed 130kW electric drive motor.

The two systems work together smoothly with the battery providing instant torque at take-off, while the turbocharger kicks in at higher revs.

While the petrol-only H6 Ultra comes with all-wheel drive, the Hybrid is driven through the front wheels.

Power is sent to the front wheels through GWM’s two-speed Dedicated Hybrid electronically controlled transmission with two separate CVTs that work together.

In terms of size, Haval H6 is at the larger end of its segment and entry is quite easy.

While the seats are adjustable in most directions the base cannot be tilted and are a little uncomfortable.

Take-off is by battery only with the instant acceleration that we love.

The engine kicks in around 30km/h and fluctuates between the two modes for optimum efficiency.

The combination of the smaller turbo engine and battery means that the H6 Hybrid cruises quietly.

Brake regeneration can be adjusted and monitored via the driver’s display.

Out in the rural segment of our test route the H6 Hybrid provides a surprisingly enjoyable drive with plenty of punch when needed.

Mazda CX-8: Get it while you can

The ride was a bit spongy at times and handling was typical of most SUVs.

Remember it’s front wheel-drive and has a modest 170mm ground clearance, so it is not suited to any serious off-road ventures. 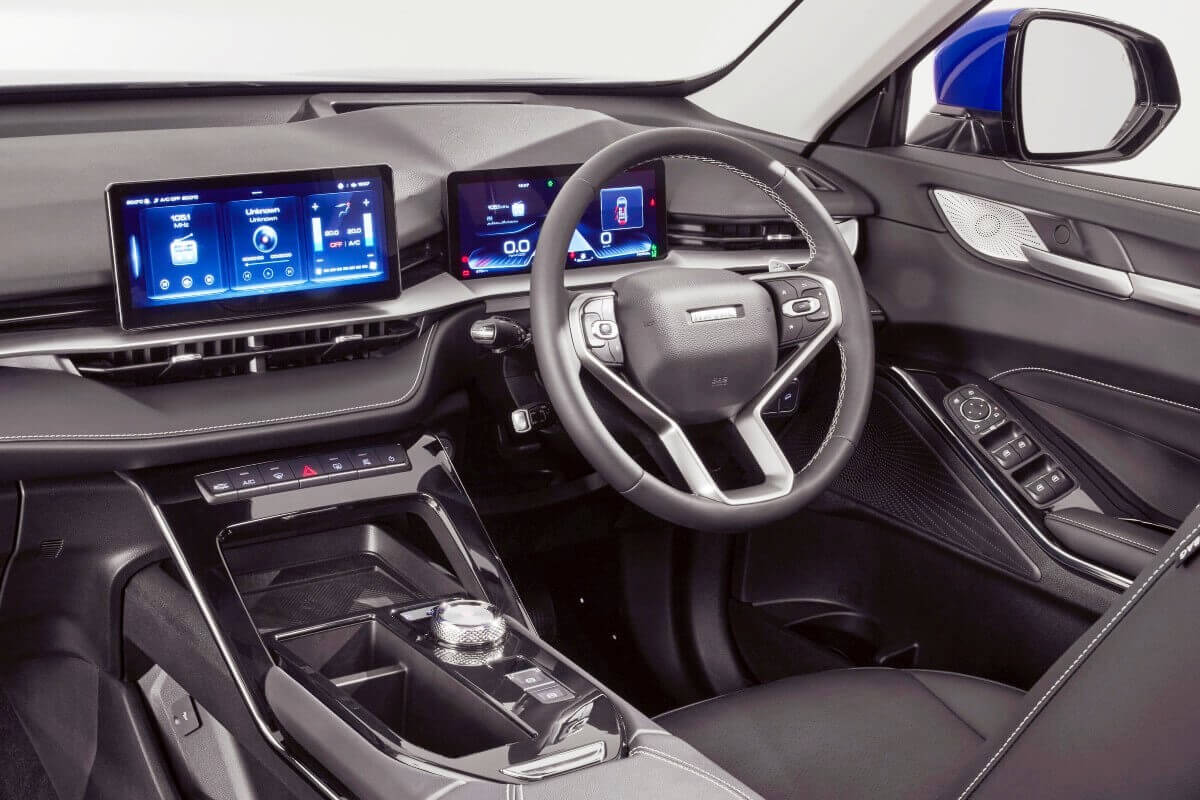 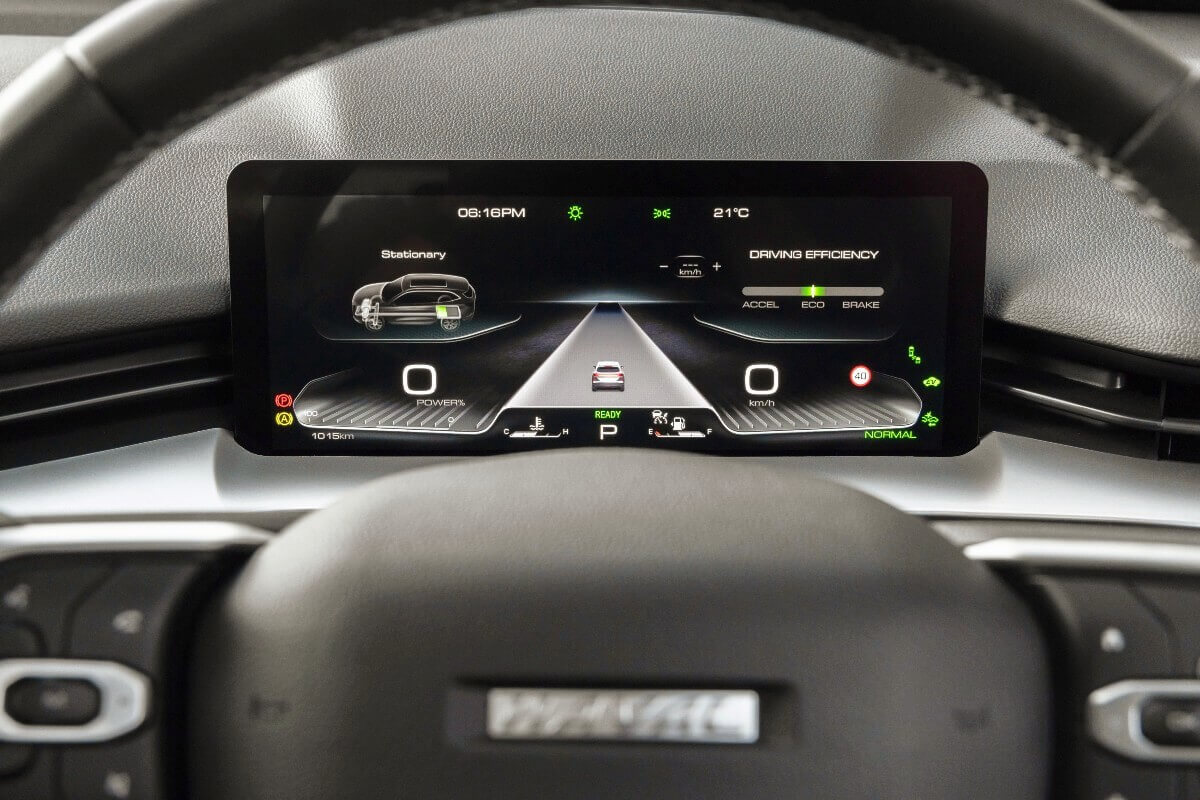 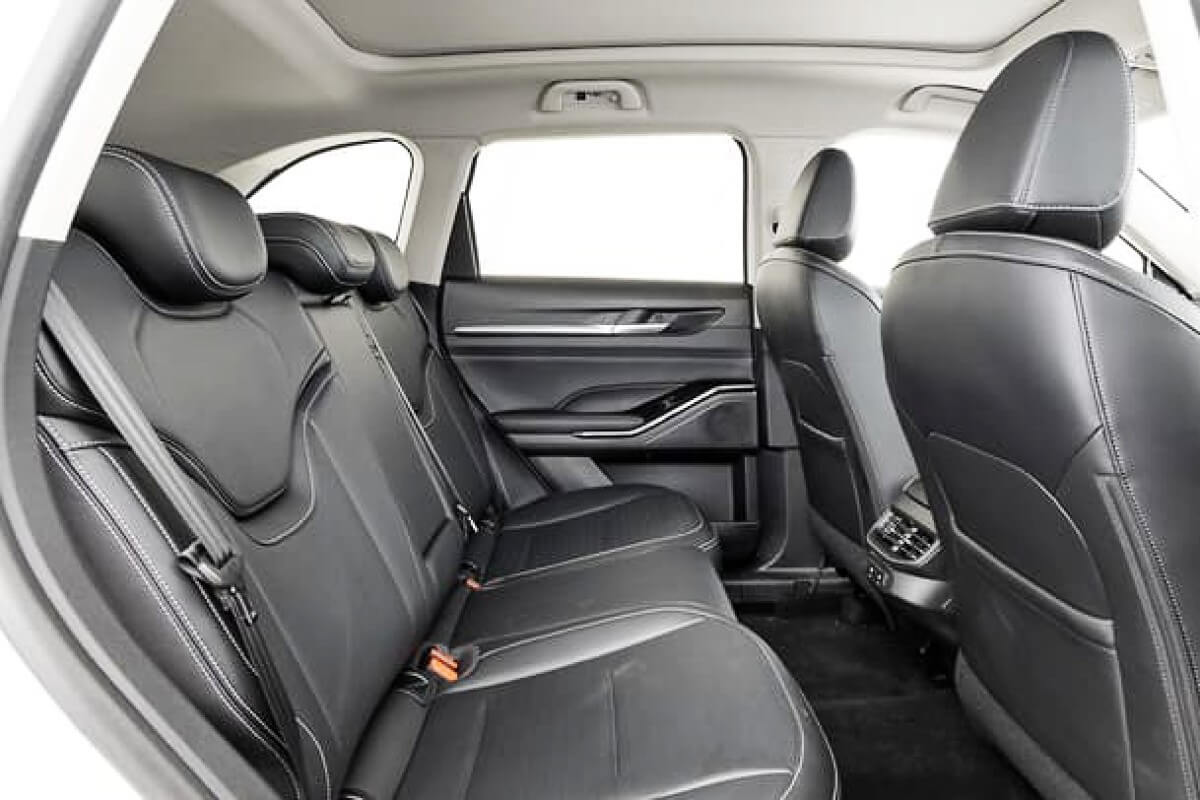 Haval and GWM have come a long way in recent years and, in our opinion, the H6 Hybrid is their best vehicle yet.

Unlike before it has a premium feel and could easily be mistaken for one of its big-selling and more expensive, Japanese or Korean rivals.

It’s an attractive vehicle and, at just under $45k driveaway, offers excellent value — and comes with a 7-year/unlimited kilometre warranty.

Stock availability (or lack of it) is currently playing an important part in the decision making process with delays of up to 12 months not unusual.

Haval tells us that you could get into a new H6 Hybrid within three months. 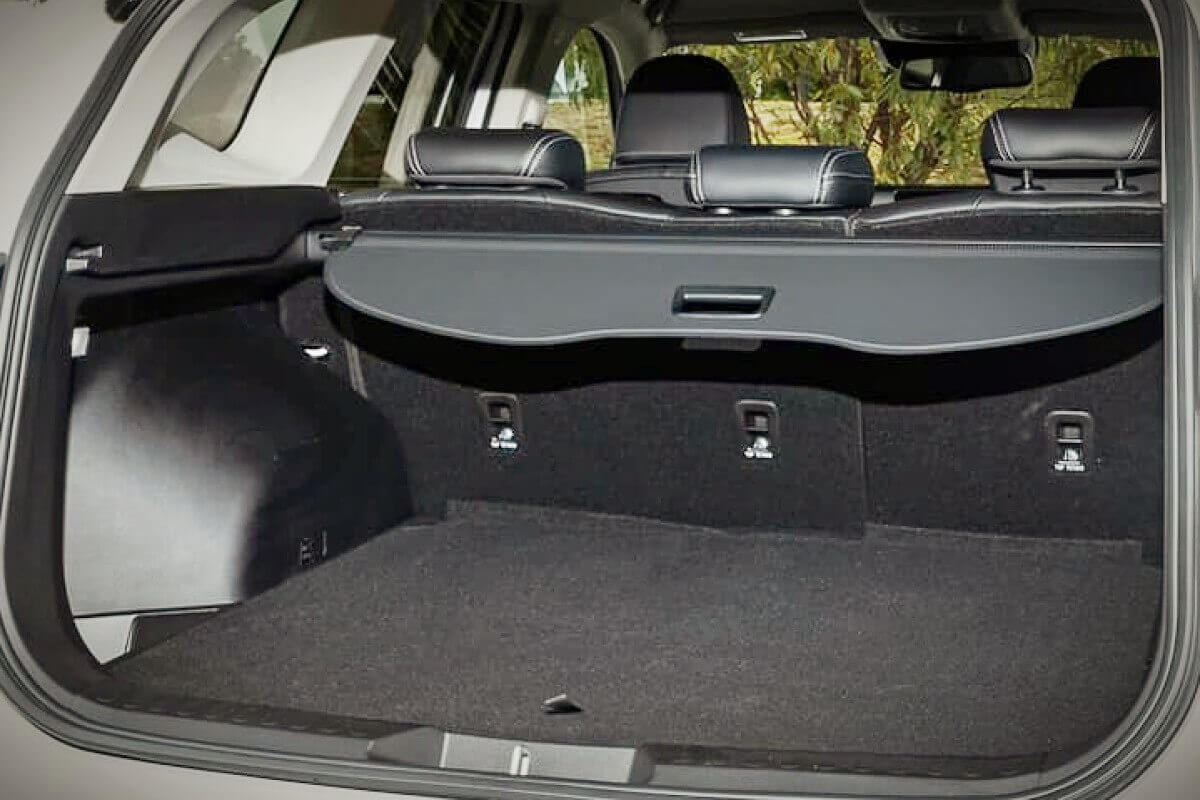 Check out deals on the Haval H6