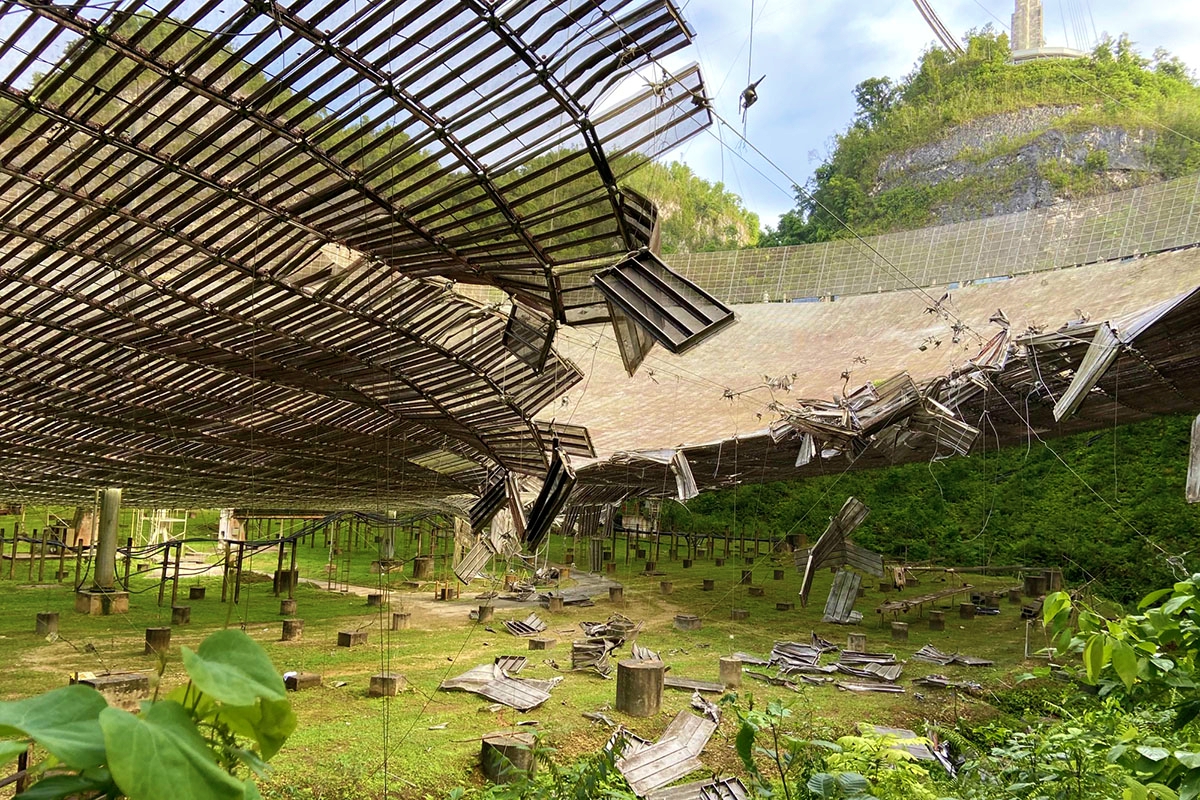 Home
Listen up
Gigantic telescope collapses in cloud of dust

NOW you see it, now you don’t.

That’s the sad tale of the celebrated Arecibo Observatory telescope in Puerto Rico, which collapsed Tuesday when its 900-tonne receiver platform plunged 140m on to the big radio dish below.

Engineers had recently warned of the huge structure’s decrepit condition, and the US National Science Foundation (NSF) announced only last month that it would be dismantled.

Two of the cables that held the platform over the radio dish — which measures 300m  in diameter — had snapped earlier this year, and the structure finally gave way on Tuesday morning.

Photographs showed clouds of dust rising into the air and the remains of the telescope instruments scattered across the site.

“We can confirm the platform fell and that we have reports of no injuries,” Rob Margetta, spokesman for the NSF, told Agence France Press.

The Arecibo telescope was one of the largest in the world and had been a tool for many astronomical discoveries since the 1960s, as well as being famous for its dramatic scale and setting.

It was often referred to as a ‘marvel of science and technology.’

It was seen by millions of people around the world when it featured in an action scene from the James Bond movie GoldenEye, with Pierce Brosnan as agent 007 which took place high above the dish.

It also featured in Contact, when Jodie Foster played the part of an astronomer and the observatory was used in her quest for alien signals.

In comparison, the Parkes telescope featured in the Australian movie The Dish measures 64m across.

Abel Mendez, director of the Planetary Habitability Laboratory at the University of Puerto Rico at Arecibo, said the platform fell sometime before 8:00 am (12:00 GMT), describing it as “a total disaster.”

“Many students are trained in astronomy in the observatory, they are inspired like me to do a career in science and astronomy,” he said.

“The loss of the Arecibo telescope is a big loss for the world, but it is more of a loss for Puerto Rico. It is an icon for our island.”

The telescope was in operation for 57 years until August, and scientists had lobbied the NSF to reverse its decision to close the site.

In August, an auxiliary cable failed after slipping from its socket in one of the towers and left a 30m gash in the dish below.

Engineers were assessing the damage and how to repair it when a main cable connected to the same tower broke on November 6.

Before Tuesday, a controlled demolition had been planned to avoid an unexpected collapse.

Among the telescope’s successes was in 1992 when it was used in the discovery of the first exoplanet — a planet outside the solar system — and in 1981 it helped produce the first radar maps of the surface of Venus.

“What a sad day for astronomy and planetary science worldwide and one of the most iconic telescopes of all time,” tweeted Thomas Zurbuchen, associate administrator at the NASA science mission directorate.

The site had hoped the dismantling plan would preserve other parts of the observatory for future research and education.

“As we move forward, we will be looking for ways to assist the scientific community and maintain our strong relationship with the people of Puerto Rico,” the NSF said.