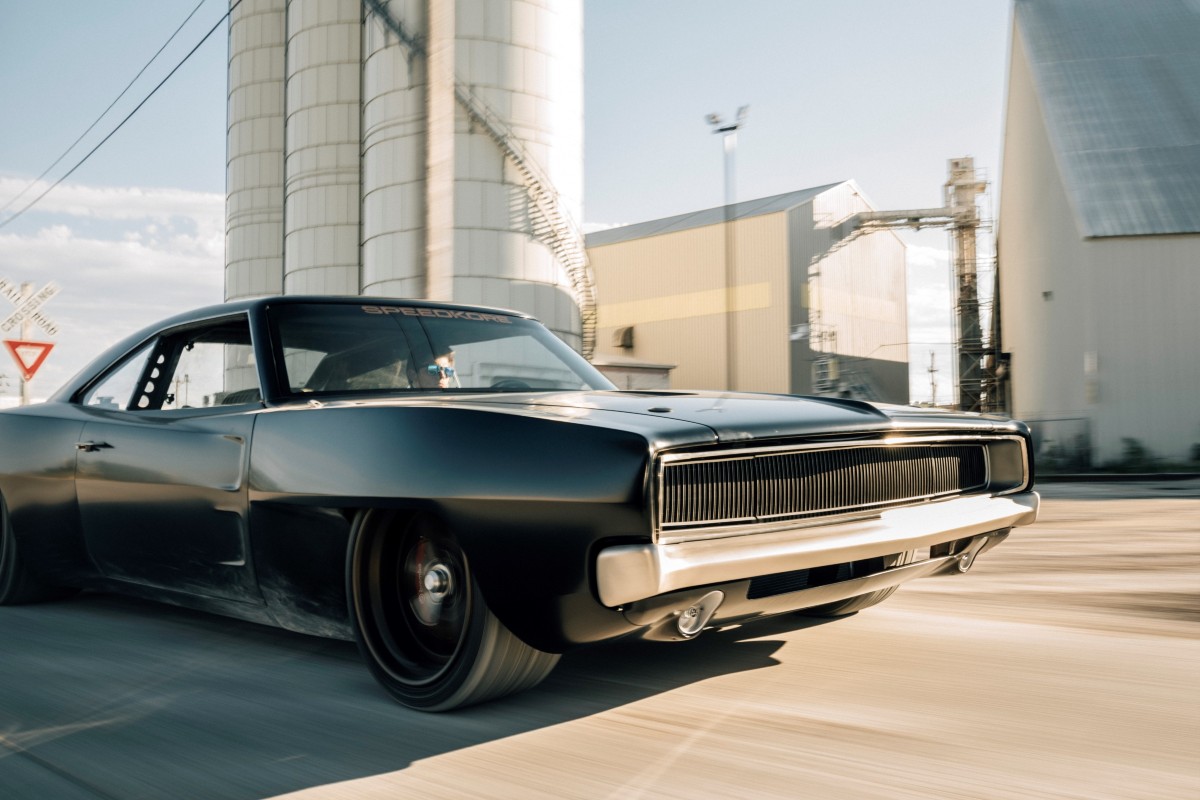 It’s a tribute to the next and ninth instalment in the Fast & Furious movie franchise — F9.

It is also the custom car builder’s first mid-engined classic.

SpeedKore is well known in the go-fast world and has worked with the franchise since 2015, when its 1970 Dodge Charger “Tantrum” appeared in Furious 7.

This time around both Chargers will appear in F9, which has just opened in US theatres.

Vin Diesel, who reprises the role of Dom Toretto, gets to drive this gorgeous piece of automotive architecture.

The movie also features Grammy-winning superstar Cardi B as newcomer Leysa, a woman with a connection to Dom’s past — and a cameo by Reggaeton sensation Ozuna.

But getting back to the main attraction, Hellacious draws motivation from a supercharged 6.2-litre Hellcat V8 mounted between the rear axles in a custom-engineered frame.

The V8 churns out 527kW of power and 881Nm of torque, delivered to the rear wheels via a gated-manual Graziano transaxle from a Lamborghini Gallardo.

It breathes through a custom exhaust fabricated from MagnaFlow components; the SpeedKore-designed headers and dual mufflers are routed high in the chassis to clear the mid-engine powertrain before exiting through down-facing tailpipes.

A front-mount Saldana performance radiator keeps the engine cool while accommodating the mid-engine architecture of the car.

At the rear, high-performance intercoolers feed cool air to the 2.4-litre supercharger.

“This Charger is one of our most extreme builds to date,” SpeedKore’s Jim Kacmarcik said.

“After commissioning renowned designer Sean Smith to design the car and working with F9’s picture vehicle coordinator Dennis McCarthy to build the nine chassis and vehicle bodies for the film, we wanted to bring the movie magic of F9 to life.”

Brembo 6-piston calipers up front and dual Brembo 4-piston calipers out back help “Hellacious” come to a quick stop, while a hydraulic hand brake assists with drifts and slides.

No surprises inside, where “Hellacious” sports a sparse, no-frills interior.

Low-back racing seats and Simpson harnesses keep the driver and passenger in place while gauges from Classic Instruments mounted in an aluminum dashboard relay necessary info to the driver.

To balance the extensive body modifications, SpeedKore included some subtle details as well.

Shaved rain gutters and flush-mounted glass present a seamless side profile, while a rear fascia with round quad tail lights and a bronze stripe keyed to the color of the wheels finish the look.