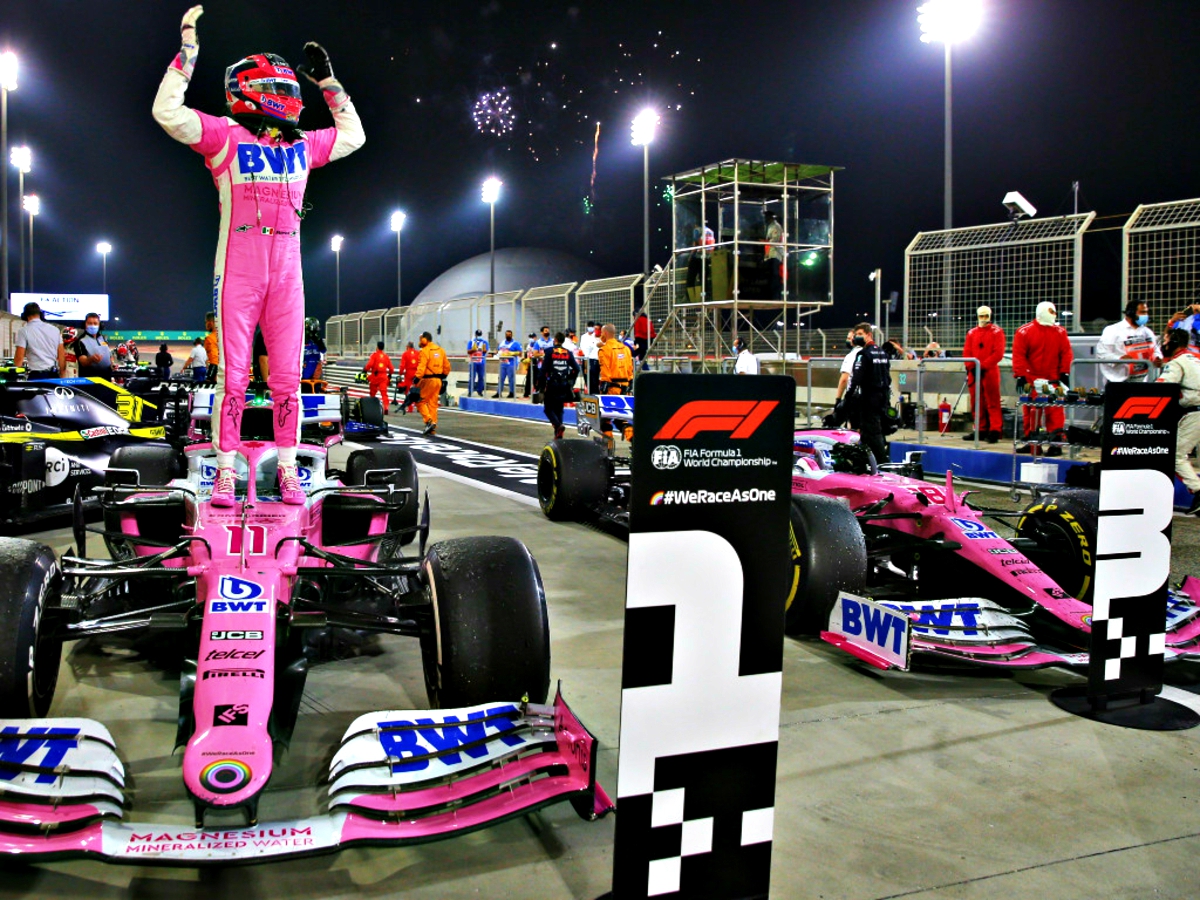 MERCEDES made a huge blunder that robbed George Russell of a maiden victory for the team.

But after 87 laps of the short circuit in Bahrain, it was Mexico’s Perez who recovered to take the chequered flag — his first in his 190th race in Formula 1.

Almost as sensational were the two other podium placers: Esteban Ocon in the Renault and Lance Stroll in the Racing Point.

It was Ocon’s first podium in his four years of Formula 1.

“I hope I’m not dreaming,” Perez said as he crossed the line in the floodlit race.

From the start it looked as if George Russell was on his way to a fairytale win in his first drive for Mercedes.

Substituting for a COVID-hit Lewis Hamilton, the young Briton took the lead and stayed there until lap 62 of the 87 laps when he pitted for fresh rubber.

But the pit crew somehow fitted the wrong tyres, a set meant for teammate Valtteri Bottas, forcing another pit stop to correct the error.

Russell then had the compounded agony of a puncture that left him in ninth spot at the finish.

The pit error obliged Bottas to stay on well worn hard tyres, and he managed to come home eighth.

It was, however, Russell’s first finish in the points, and he had never before led a single lap in Formula 1.

Behind the podium trio in fourth came Carlos Sainz who had a great drive in his McLaren, with Daniel Ricciardo fifth for Renault, ahead of Red Bull’s Alex Albon.

Seventh was Daniil Kvyat in the Alpha Tauri,  then the Merc pair of Bottas and Russell while Lando Norris took the final point for McLaren.

But the wild race belonged to Perez, who put in a superhuman performance to come from a safety car restart after being whipped around in a bizarre crash on the opening lap — to  power his way to the front.

The crash, due to be investigated by race officials, happened when Leclerc made an ambitious move on Perez at Turn 4, but carried too much speed and hit the side of the Racing Point, spinning it around.

Verstappen, who branded Leclerc’s move as reckless, ran wide to avoid them but slid his Red Bull into the wall and out of the race.

After the restart, Sainz shot from eighth on the grid to third, followed by Ricciardo, Kvyat, Stroll, Gasly, Ocon, Vettel and Norris, while Perez popped into the pits for new tyres after being hit by Leclerc’s Ferrari.

He rejoined stone last, then set about overhauling the 17 cars in front.

Such was his pace that he was into the points in 10th by lap 20 while Russell was doing a great job up front with a two-second gap to Bottas.

By lap 45 he was eight seconds ahead of Bottas.

On lap 55 McLaren and Renault both pitted Sainz and Ricciardo out of third and fourth under a Safety Car, but it was a short-lived safety period and they came out of the pits seventh and eighth.

Meanwhile, Perez had got by teammate Stroll for fourth place, then picked off Ocon and seemed secure in third.

That was when Mercedes made their faux pas, pulling their two cars in for a calamitous tyre stop.

Toto Wolff was quick to apologise to Russell, describing the error as  a “colossal f*** up.”

So Perez cruised to his first win.

“I hope I’m not dreaming because I dreamed so many years of being in this moment.”

“Ten years, ten years it took me. Incredible. I mean, I don’t know what to say.

“After the first lap the race was again gone, same as last weekend.

“But it was all about not giving up, recovering, going for it, just making the best of what you possibly could.

“This season the luck hasn’t been with us, but we finally got it. I think today we were on merit.

“Yes, the Mercs had some issues but in the end my pace was strong enough to hold George – who did a fantastic race today.”

“What a race! We made it, we’re on the podium and it’s a fantastic feeling,” the Frenchman said.

“It was awesome and all the emotions left my body when I crossed the line. I definitely cried and I’m proud to say it.

“That moment, crossing the line, I’ll remember it forever. The team executed the race really well, we had strong pace, and I had some fun out there with some overtakes too.

“It’s been a tough season but we kept believing in ourselves and that’s rewarded with this amazing feeling. Keep believing and it will come at some point.”

Teammate Ricciardo was almost as enthusiastic.

“It’s an amazing result for the team and congratulations to Esteban for getting his first ever podium, it was a really strong race by him.” he said.

“For me it was slightly disappointing as we could have done even better than fifth.”

There’s one more race this season: the Abu Dhabi Grand Prix, at the spectacular Yas Marina Circuit on December 13.

Note – Russell scored an additional point for setting the fastest lap of the race.