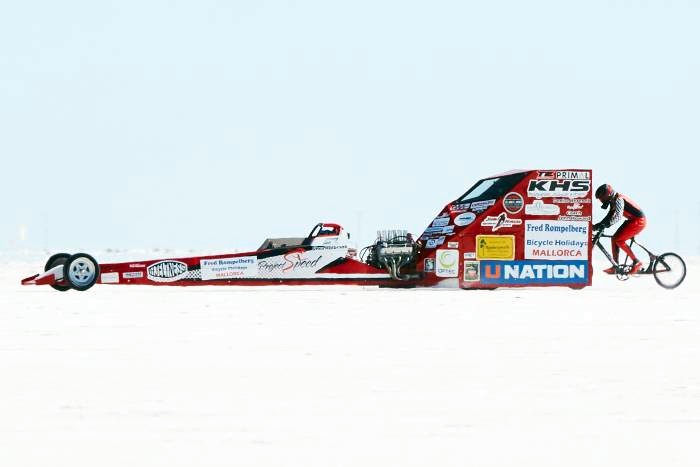 Everyone has heard of the famous Bonneville Salt Flats.

It’s the place where people go to have a crack at land speed records.

Long and white and rock hard it stretches into the shimmering distance, beckoning those trying to write their way into the history books.

It’s the place that Kiwi Bert Munro took his old, home-engineered Indian motorcycle in the 60s and set not one but three world records — a feat immortalised in the 2005 movie The Word’s Fastest Indian.

And it’s the place that a 45-year-old US woman last week pedalled her bicycle to a new world speed record, when she reached almost 300 km/h — yes 300 km/h.

Denise Mueller-Korenek not only broke her own record but the men’s record as well, when she powered to an incredible 296.010 km/h on a bicycle behind a drag car driven by another woman.

It’s a dangerous undertaking because the Dutchman crashed twice in pursuit of his record, at speeds of more than 160km/h, and broke 24 bones before he was successful.

Mueller-Korenek used Rompelberg’s same 745kW dragster which had been restored in preparation for the attempt.

But you really need to watch the video to understand how she did it.

The US track, road and mountain bike champion was towed by the dragster for the first part of the attempt, in fact until she reached a speed of 100 mph (160 km/h), before she was released to pedal the rest of the way under her own steam.

She remained in the slip stream of the dragster for 5.6 km and in doing so was able to achieve an average speed of 296.010 km/h over the final couple of kilometres.

Her bike is more than two metres long and fitted with 17-inch motorcycle wheels to main stability.

It has two main sprockets, with a drive ratio that is so high it allows the bike to travel almost 40 metres for every revolution of the pedals.